Prince Charles and Camilla begin Africa tour in The Gambia

The Prince of Wales and Duchess of Cornwall have touched down in The Gambia to begin their nine-day tour of Africa.

Charles and Camilla arrived at Banjul International Airport on Wednesday evening where they were greeted with a ceremonial welcome from dancers in colourful dress and a long line of dignitaries.

The couple were met on the red carpet by President of The Gambia, Adama Barrow, and one of his wives; Mr Barrow practices polygamy and has four living children with his two partners.

Mr Barrow’s ‘second wife’, Fatou Bah, is not believed to have been present.

Welcome to The Gambia! Charles and Camilla arrived at Banjul International Airport on Wednesday evening to kick off their major nine-day tour of Africa 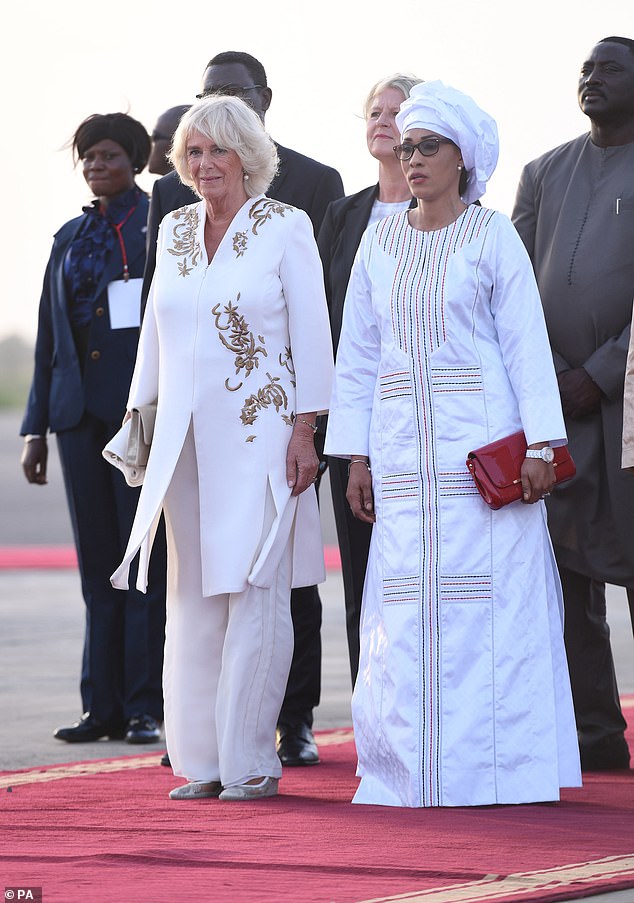 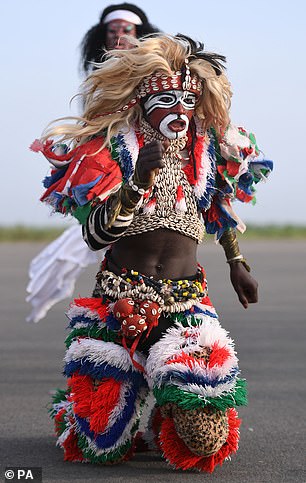 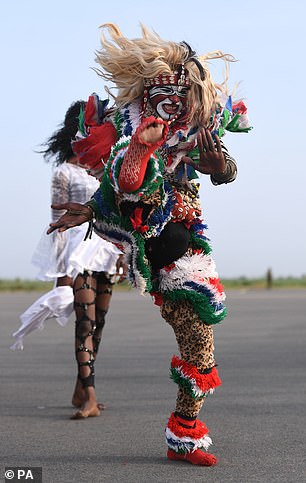 The royal couple were greeted with a colourful ceremonial welcome from dancers in traditional dress, pictured, after touching down in Banjul on Wednesday evening

Tonight, the couple will be officially welcomed to the country by the President at a ceremony in McCarthy Square in the Capital City of Banjul.

The prince and duchess will tour the Gambia, Ghana and Nigeria on behalf of the British government on their tour, Clarence House announced last month.

The couple will return to London just in time for Prince Charles’ landmark 70th birthday on November 14.

However the Palace has indicated that the various birthday celebrations for the heir to the throne will take place throughout the year.

They set off for The Gambia on the day the Duke and Duchess of Sussex travelled back from their two-week tour of Australia, Fiji, the Kingdom of Tonga and New Zealand – meaning the two couples will have just missed each other.

Key events in the tour include a visit to the Medical Research Council, which is a faculty of the London School of Hygiene and Tropical Medicine.

The centre has undertaken pioneering research into malaria and other diseases which affect millions of people across Africa. 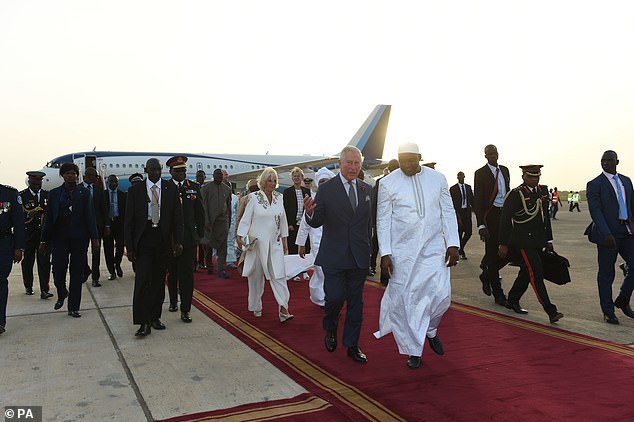 Charles and Camilla are led off the plane by their hosts on Wednesday evening, where a long red carpet was rolled out ahead of the guests’ official welcome ceremony 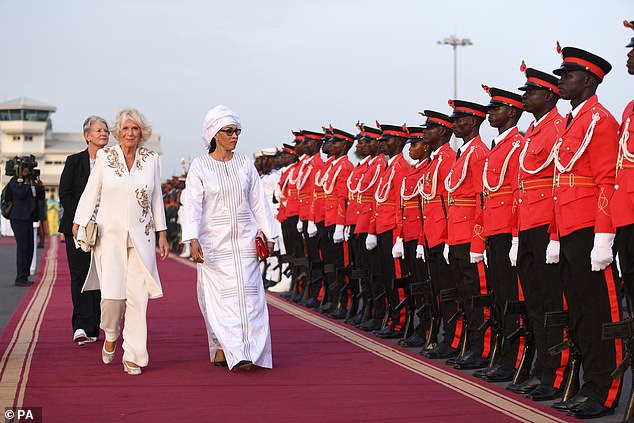 Two First Ladies: The Duchess of Cornwall is greeted on arrival at Banjul tonight by Mrs Sarjo Mballow-Barrow, one of the President’s two spouses and regarded as his ‘first wife’ 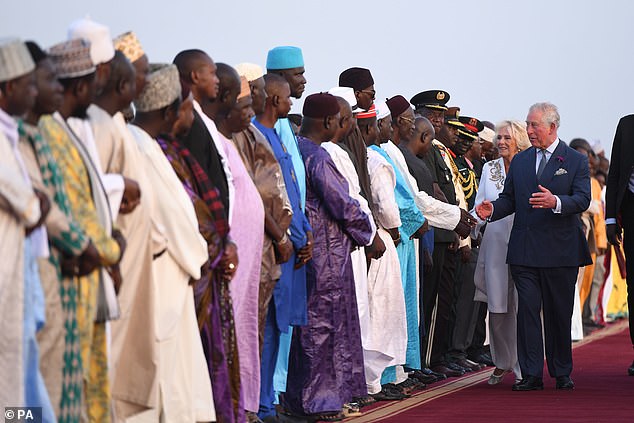 Welcome party: The Prince of Wales and Duchess of Cornwall were met by a long line of colourfully-dressed dignitaries after arriving at Banjul International Airport tonight 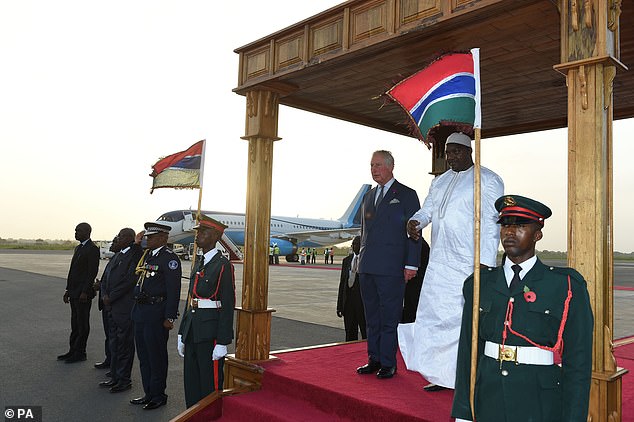 After disembarking the plane, Charles was invited to join the President of The Gambia, Adama Barrow, on a dais as part of their official welcome ceremony at Banjul airport

Charles’ visit will highlight the key role the centre plays in the global fight to eliminate malaria, Clarence House said.

The Prince of Wales will also visit the Gambian Armed Forces Training Centre, where troops are trained for their role with the United Nations – African Union Hybrid Operation in Darfur.

Meanwhile, Camilla’s programme will include a visit to a school to meet young people aspiring to enter the Queen’s Commonwealth Essay Competition, which is the world’s oldest schools’ international writing competition, managed by The Royal Commonwealth Society since 1883.

For the past few years the Duchess has presented certificates to winners and runners up of the Commonwealth Essay Prize, on behalf of the Queen, at a formal awards ceremony that takes place at Buckingham Palace in November. 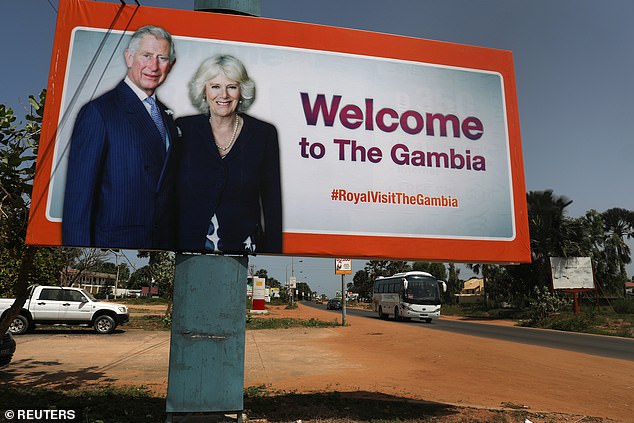 Warn welcome: A billboard showing the portrait of Charles and Camilla is pictured ahead of their visit to Banjul, Gambia on Wednesday

Charles and Camilla are following in the footsteps of Prime Minister Theresa May, who recently made a three-nation trade mission to Kenya, South Africa and Nigeria during August and September, in an attempt to bolster Britain’s post-Brexit fortunes.

Scott Furssedonn-Wood, Charles’ deputy private secretary, said the couple were visiting the three countries at the request of the British Government.

He added: ‘Their Royal Highnesses’ visit will celebrate the UK’s historic ties with these three Commonwealth nations, and also our dynamic contemporary partnerships with each of them in areas ranging from business to the arts, defence co-operation to medical research.

‘The tour will also highlight the people-to-people links between our countries and the invaluable contribution they make to our shared prosperity and security.’