Theresa May’s team were last night said to be offering rebel MPs peerages and other sweeteners in a bid to buy votes to get her Brexit deal through Parliament.

With more than 90 Tory MPs indicating they will not back it, and the Democratic Unionist Party withholding support, the Prime Minister faces an uphill struggle.

Mrs May has vowed to ‘make the case for this deal with all my heart’ to persuade restless MPs to back her. But it appears she will also resort to horsetrading.

Some Brexiteers were said to have been offered peerages while other MPs are being bought off with changes to bills, according to reports.

Commons Leader Andrea Leadsom has been placed on resignation watch by No 10 after failing to back Mrs May’s deal publicly.

Sources close to Mrs Leadsom, a key player in Vote Leave, said she was ‘weighing up options’ but her spokesman insisted she was not resigning. Her Brexiteer colleagues Penny Mordaunt and Chris Grayling also declined to comment on whether they would back the plan.

It is now crunch time for the Cabinet Brexiteers after the withdrawal agreement was formally signed by EU leaders at a summit Mrs May attended in Brussels yesterday. EU chief Brexit negotiator Michel Barnier was kissed by European Commission president Jean-Claude Juncker as European Council president Donald Tusk joined in the congratulations.

A Commons vote on the deal will be held shortly – most likely on December 12. 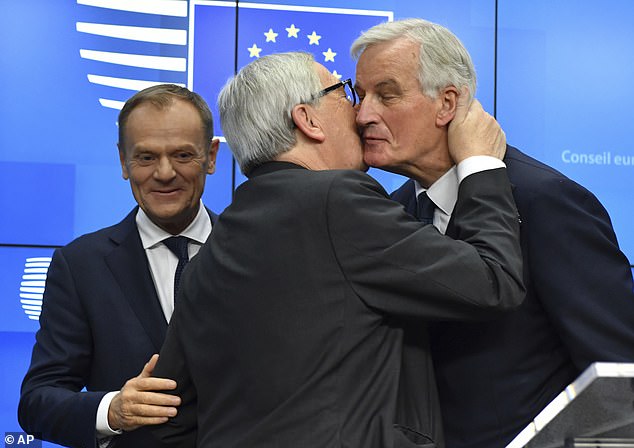 Mrs May has conceded she may have to approach Opposition MPs to win support. She was even forced to deny in Cabinet that she had attempted to win support from Labour leader Jeremy Corbyn in exchange for the promise of a general election.

Yesterday there were reports that Mrs May’s team were setting up a ‘war room’ in the Cabinet Office to win the votes they need.

Chief of staff Gavin Barwell and spin doctor Robbie Gibb are expected to give the Cabinet a class in ‘selling the deal’.

Sources said Mrs May’s aides were approaching MPs to ask what they wanted to secure votes. One veteran Eurosceptic was said to have been told: ‘We need more people in the House of Lords… I think you’d be a strong voice.’

However, some MPs have clearly been written off as lost causes, with one Brexiteer saying he would be lucky to receive a lump of coal.

Many Tories are unconvinced Mrs May can win the votes she needs or will have the scope to deliver on promises. One MP said: ‘She can’t just offer 90 peerages.’

Veteran Eurosceptic John Hayes yesterday insisted he will not vote for the deal despite Mrs May promising him a knighthood.

He told The Mail on Sunday: ‘As I’ve made very clear before my honour, I cannot support the deal as it now stands.’ 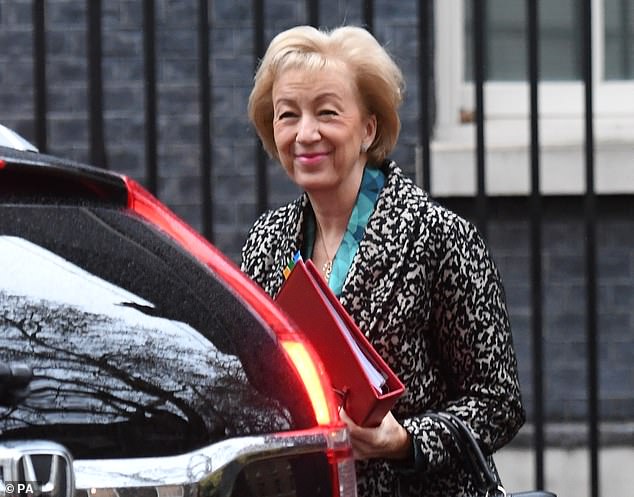 Mrs May’s team are said to be thinking up sweeteners for rebels such as former party leader Iain Duncan Smith and Mrs Leadsom. The Commons Leader is said to have met Mrs May last week to demand technological solutions to the Northern Irish border issue, rather than the backstop.

‘There’s a big effort going on to try and find something that for the Andrea Leadsoms, the Iain Duncan Smiths, is a little bit of a victory,’ a loyalist Cabinet minister told the Sunday Times. Plans are also in place to win over rebels by tweaking legislation making its passage through Parliament.

Ministers are expected to back plans to ban men accused of domestic violence from cross-examining their accusers in court.

This is thought likely to be met with approval by female MPs including Remainers Sarah Wollaston and Heidi Allen, who favour a second referendum. Britain may also pledge to take more child refugees to win over MPs who have championed their cause, including Mrs Allen. Government support for a private member’s bill banning hospital parking charges, put forward by MP Robert Halfon, who opposes the deal, may be given.

Similarly, a cut in air passenger duty could be introduced after backbench Tories and the DUP backed it. When Chancellor Philip Hammond spoke at a private DUP dinner on Friday, a source said he was ‘taking his chequebook’.

Meanwhile, it was claimed last night that Britain could run out of clean water within days in the event of ‘no deal’ as purification chemicals could be stopped at the border. The doomsday scenario was said to have convinced Environment Secretary Michael Gove to back Mrs May’s deal.