A juvenile judge in Houston stunned everyone in his courtroom when he freed as many as a dozen juvenile suspects who appeared before him the day after he lost reelection to a Democrat.

Judge Glenn Devlin, who is known for sending youths to detention in droves, simply asked whether or not they planned to kill anyone before turning them loose.

Public defenders said he complained ‘that’s what the voters want’ as he indiscriminately freed people, seemingly implying that the newly elected Democratic judges would be lenient towards criminals.

Judge Glenn Devlin lost his bench on Tuesday night to a Democrat, and on Wednesday freed all seven youths who came before his court, saying ‘that’s what the people want’

The youths were facing various charges, ranging from misdemeanors to felonies stemming from violent crimes. At least four of them were facing accusations of aggravated robbery.

All of the cases came before his court on Wednesday, the day after the midterm elections, the Houston Chronicle reported.

Democrats swept the benches of Republican justices in Houston on Tuesday night, seizing control of 59 posts, including Devlin’s.

After setting the juveniles free, Devlin rescheduled all of the cases for January, when his replacement will have taken the bench.

Public defender Steven Halpert quoted Devlin as telling his juvenile client accused of aggravated robbery, as well as other: ‘”If I release you, are you going to go out and kill anybody?”‘

Each of the defendants said ‘No’ and was released on the spot.

Halpert said he had previously requested Devlin to release his client from detention on three separate occassions, but without success.

Harris County District Attorney Kim Ogg hit out at Devlin over the move, saying: ‘We oppose the wholesale release of violent offenders at any age. This could endanger the public.’ 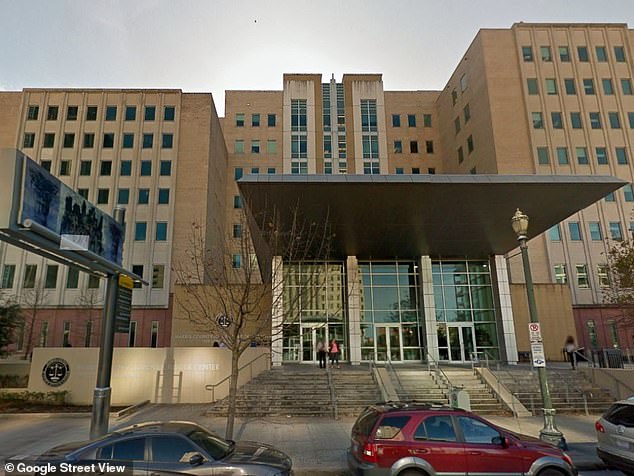 Devlin, who sits at Harris County Juvenile Court in Houston (pictured), is notorious for sending youths to detention, but decided to break with that habit after losing the election

Until Wednesday, Devlin had a reputation for readily sending children to detention, and together with another justice, he was responsible for one in five juvenile suspects sent to detention last year.

‘I’m not sure that I can wrap my arms around what he’s actually doing,’ Alex Bunin, the chief public defender in Harris County, said. ‘It’s a huge change, and the only thing that has happened is that he was not elected, so I don’t know what to attribute it to other than that.’

Halpert said it is not uncommon for Devlin to release a juvenile who has already been in detention upon review, but has never seen anything like what happened on Wednesday.

‘The voters of Harris County clearly wanted a change in the juvenile courts, and Judge Devlin today is showing us why the voters may have wanted change,’ said Jay Jenkins, a policy attorney with the Texas Criminal Justice Coalition.

Devlin declined comment Wednesday when contacted by the Houston Chronicle.

The ACLU of Texas is calling on the Texas Commission on Judicial Conduct to investigate Judge Devlin, accusing him of releasing the juveniles without any regard for their safety and without ensuring they are released to their parents.

‘It is improper for a judge to make orders motivated by partisan interests or in spite as a result of his political loss,’ said Sharon Watkins Jones, director of political strategies for the ACLU of Texas.

Natalia Oakes, the Democrat who beat Devlin in the election, told KTRK she would not have expected this kind of conduct ‘from a professional.’ .