A quick phone call to elderly patients recently discharged from hospital could slash readmission rates by nearly half, research shows.

Emergency readmissions place a major strain on the NHS, with 865,000 patients a year rushed to A&E within just a month of being discharged.

And the problem is particularly acute among elderly patients, with 15 per cent readmitted, often due to avoidable accidents such as falls or issues with medication.

But experts at Aston University in Birmingham suggest a phone call from a community nurse could help to ensure elderly patients do not return within a month.

They found patients who received a call, and a follow-up visit if necessary, were 41 per cent less likely to be readmitted than those who were not contacted.

And the researchers suggest this simple aftercare could significantly reduce strain on the NHS, which now spends £2.4billion a year on readmissions after the number soared by 21.8 per cent between 2013 and 2018.

Study lead Dr James Brown said: ‘Our work shows a simple service… leads to a significant reduction in the number of patients readmitted within a month.

‘The combination of Britain’s ageing population and an under-pressure NHS means it is now more important than ever to minimise costs to our health services caused by unnecessary readmissions. It may be hard to believe that something as simple as a phone call can have such a major impact, but our evidence suggests this is so.’

The study, published in the Royal College of Physicians’ Future Healthcare journal, tracked two groups of elderly patients in Solihull, West Midlands – 303 of whom were contacted by nurses after discharge, and 453 were not. 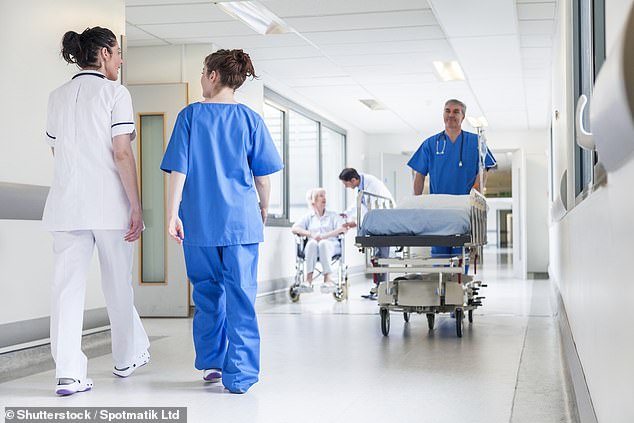 Emergency readmissions place a major strain on the NHS, with 865,000 patients a year rushed to A&E within just a month of being discharged (stock image)

Among those who did not receive a phone call, 16 per cent were readmitted as emergencies within 30 days of leaving hospital. But this figure dropped to 9 per cent in the group who were contacted.

Dr Martha Pinkney, elderly care consultant at Solihull Hospital, said: ‘We have shown that a simple and inexpensive intervention may be highly effective at reducing readmission rates in this vulnerable population.

‘It warrants further investigation to quantify these potential significant benefits for both patients and the health service.’