It was amid the terror of the trenches that they stopped and put on a brave face for their families.

Amid the three-month Battle of the Somme in 1916, thousands of British, Australian and French soldiers posed for photos that were later sent home to relatives.

The 4,000 glass plate negatives of mostly unidentified Western Front troops were uncovered in 2010 in an attic in a farm house in northern France, by author Ross Caulthart and military historian Peter Burness.

Now, with only a fraction of the First World War troops having been identified, researchers are calling on the public and potential relatives to help put names to their faces.

In Australia, around 250 of the 800 Australian soldiers who feature have been identified, but in Britain, historians have only been able to trace 100 of the 1,500 Britons who are pictured.

The images were taken by French couple Louis and Antoinette Thuillier, who lived in the village of Vignaport. Their photos now form what is called the Thuillier Collection.

Vignaport, just 30 miles from the front lines, acted as a staging post, where soldiers could rest and prepare for battle.

It was amid the terror of the trenches that they stopped and put on a brave face for their families. After the Battle of the Somme in 1916, thousands of British, Australian and French soldiers posed for photos that were later sent home to relatives. Above: One of the images of an unidentified British soldier. He is seen sitting with a small dog on his lap 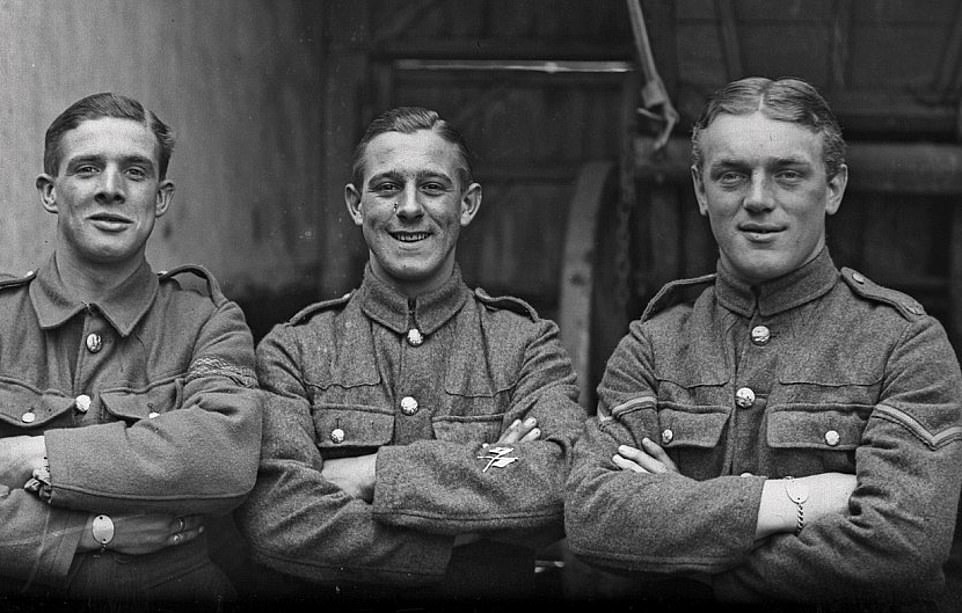 The 4,000 glass plate negatives of mostly unidentified Western Front troops were uncovered in 2010 in an attic in a farm house in northern France, by author Ross Caulthart and military historian Peter Burness. Above: These three soldiers from an unidentified regiment are among those who appear in the photos 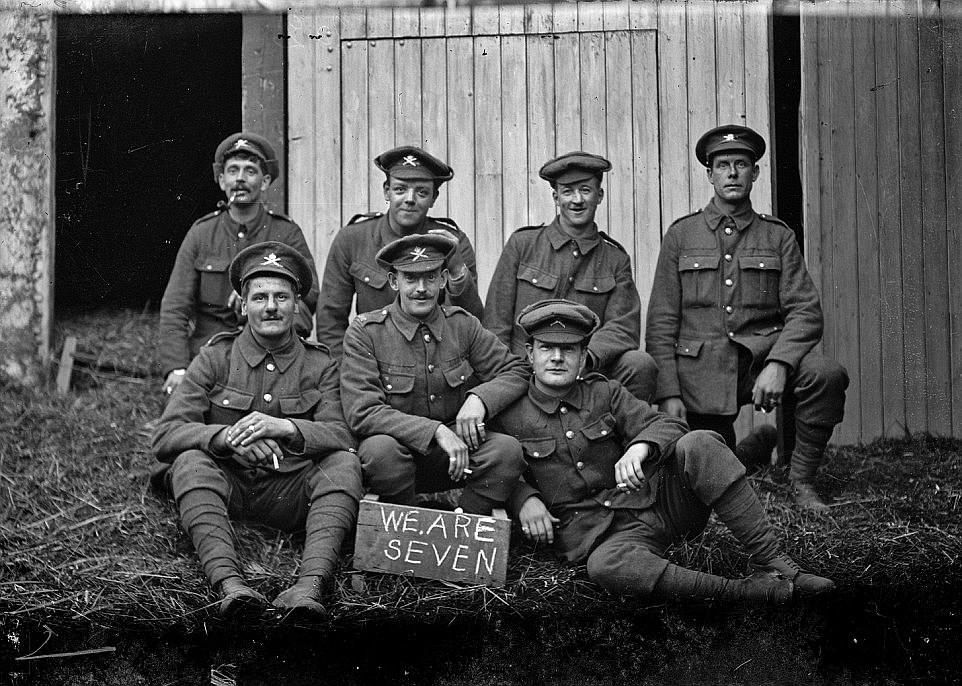 Friendly comrades are seen posing together on a bed of straw as a sign announces: ‘We are seven’. The image is one of the thousands that were taken by French couple Louis and Antoinette Thuillier

The Thuilliers hit upon the idea of charging a small fee to take portraits mages of soldiers as they sought to capitalise on the hive of activity that Vignaport became during the war.

Their images were printed onto postcards, allowing soldiers to maintain a fragile link with soldiers back home.

The images capture what military life was like for the troops as well as some of the friendships and bonds formed between the soldiers and civilians.

Some of the images have been displayed in a museum in the Thuilliers’ former farmhouse since 2018.

Alice Orzechowski, assistant director of the Vignacourt 14-18 museum, told The Times that it is ‘more difficult’ to identify British men because of ‘limited access’ to archives and the fact that it costs money.

Appealing for help, she called on both researchers and ordinary Britons to help ‘take part in this research adventure’. 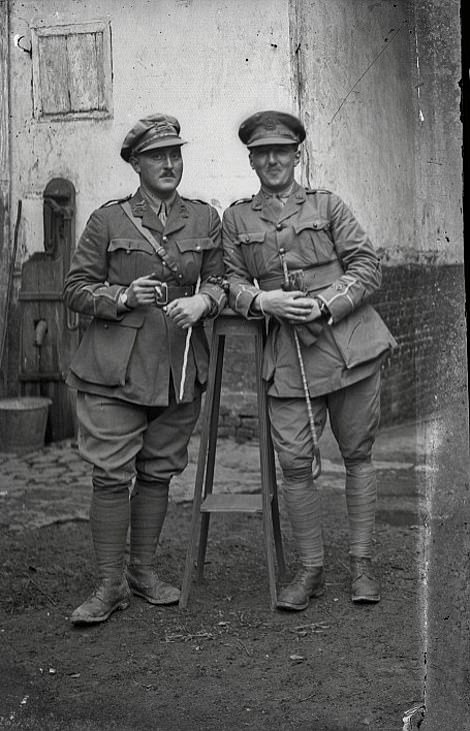 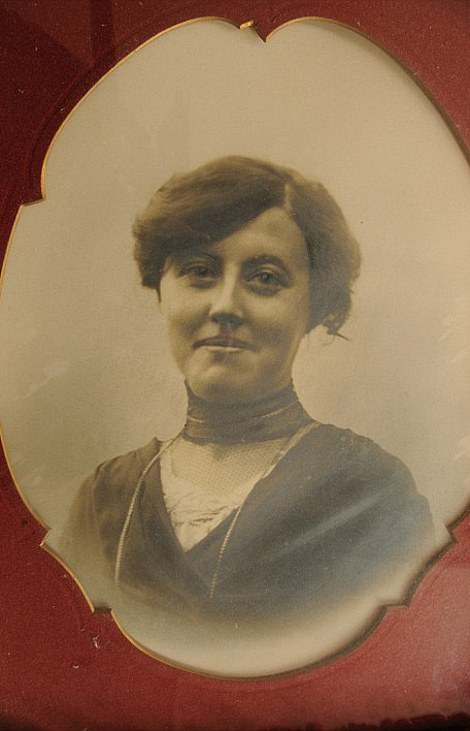 It was in Vignacourt that local couple, Louis and Antoinette Thuillier (pictured right), hit on the idea of taking portrait photos of soldiers passing through the town to send home to their worried families. Above left: Two British troops pose for a photo together 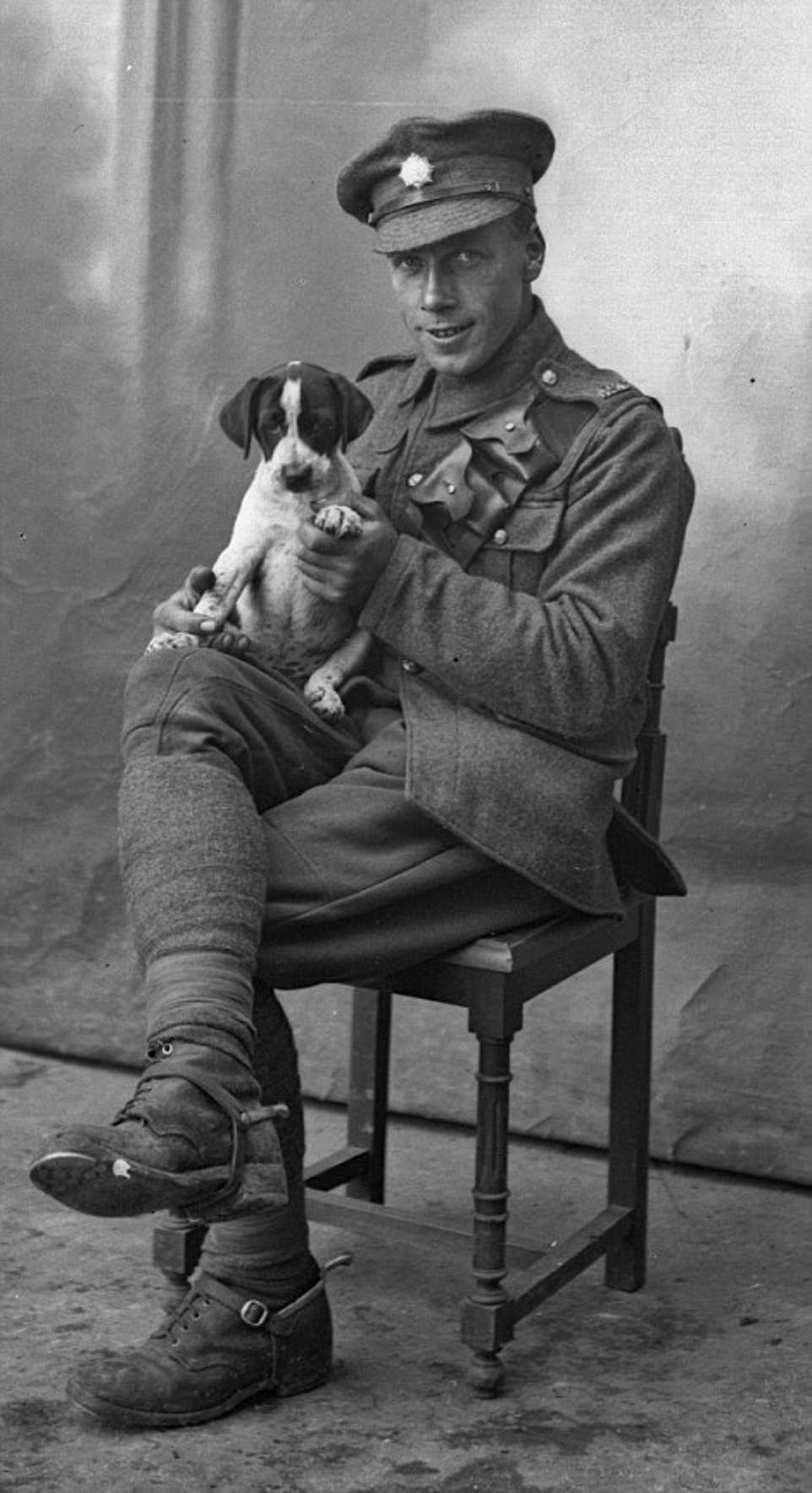 For much of the First World War, the small French village of Vignacourt was always behind the front lines – as a staging point, casualty clearing station and recreation area for troops of all nationalities moving up to and then back from the battlefields on the Somme. Above: Another soldier poses with a dog 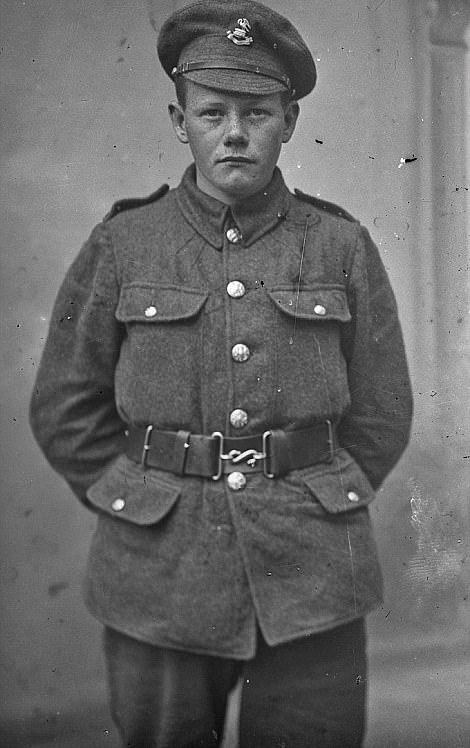 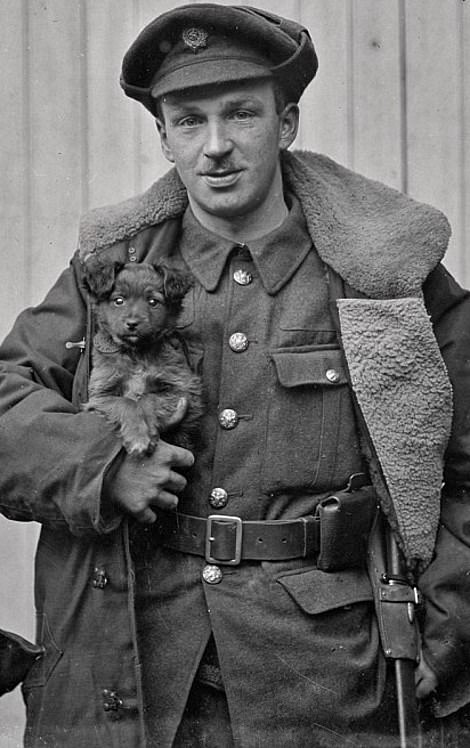 Just boys themselves: Some of the images reveal just how young many of the soldiers who fought were. The above two men are among the 1,400 who are unidentified 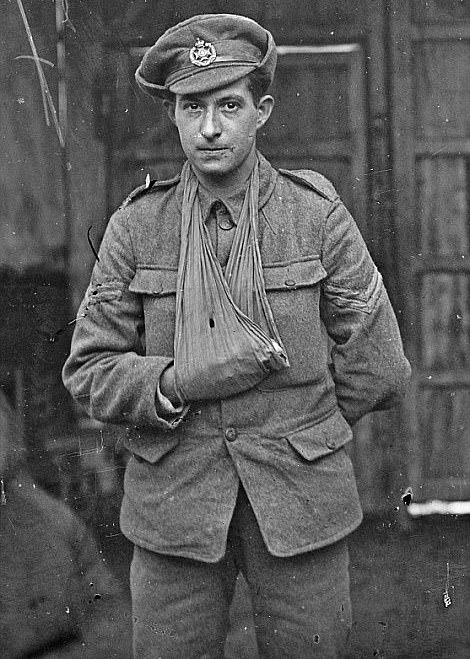 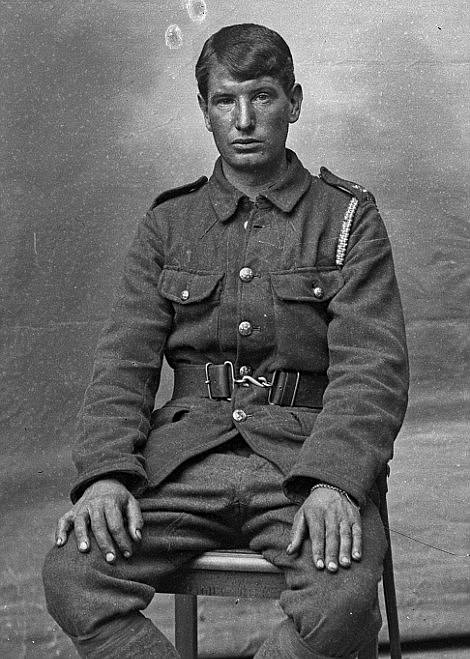 Signs of battle: One young man is seen with his hand in a sling after being wounded at the front, whilst another man betrays the look of someone who has seen the horror of war first-hand 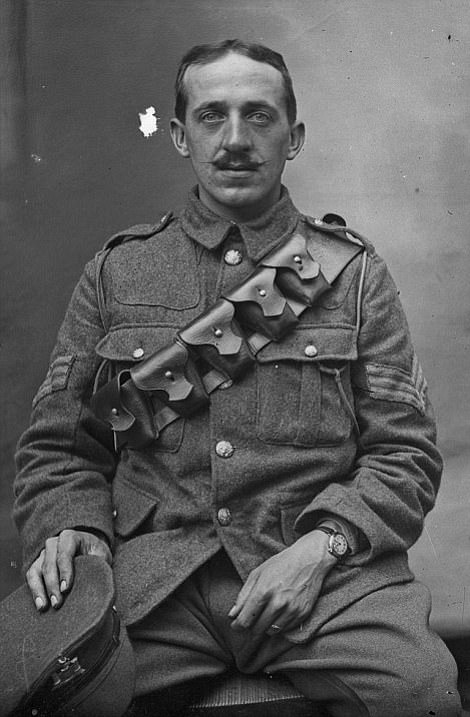 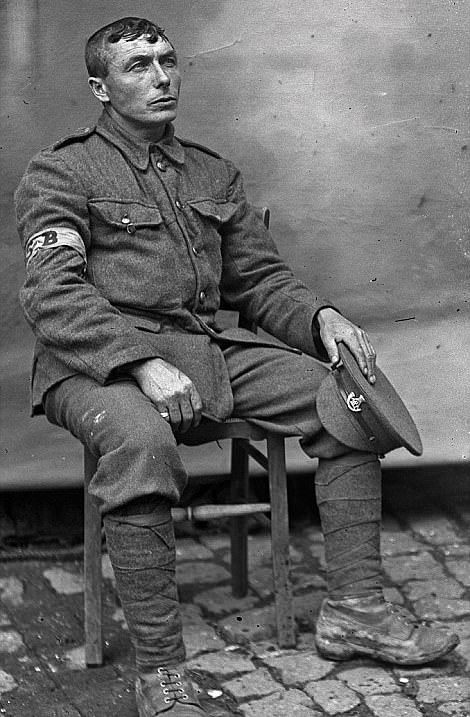 The Thuilliers hit upon the idea of charging a small fee to take portraits mages of soldiers as they sought to capitalise on the hive of activity that Vignaport became during the war. Above: Two unidentified Britons pose for images 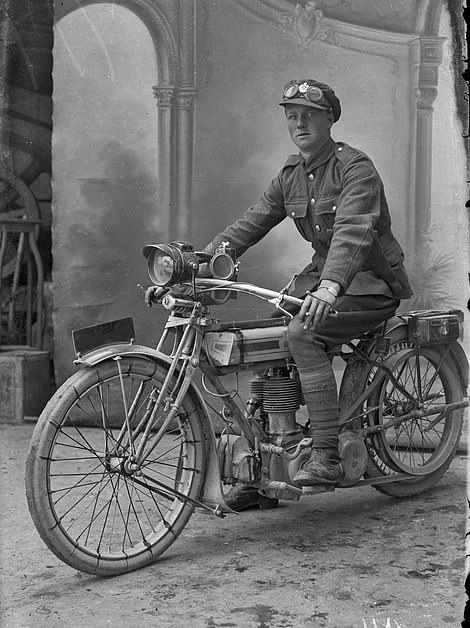 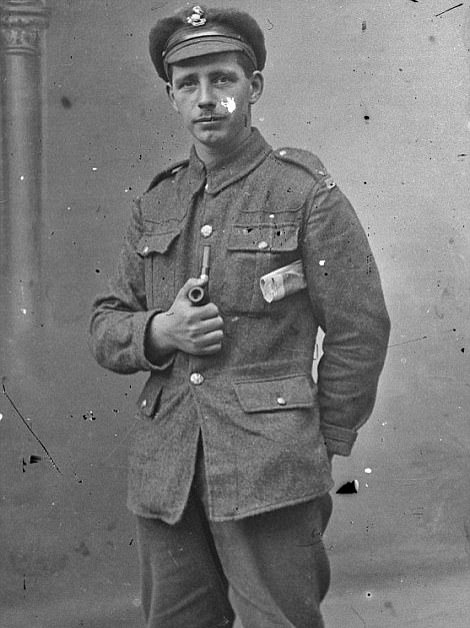 The never-before-seen images of Western Front troops were uncovered almost a century after they were taken having lain hidden in an attic in a farm house in northern France. Above: A soldier poses on a motorbike as a comrade stands with a pipe in his hand

Mr Coulthart’s 2016 book, The Lost Tommies, displayed some of them for the first time. The original glass plate negatives were bought by Australian businessman Kerry Stokes.

The plates of British, American, French African, Nepalese and Indian soldiers are housed by Mr Stokes’s museum, the Stokes Collection.

Mr Coulthart told The Times that he had not been able to find British museums willing to preserve, restore and digitise the images of British men.

He claimed that on visiting museums in the UK, his inquiries were met with ‘disinterest and unhelpfulness’

Battle of the Somme: One of the deadliest fights in history

Lasting 141 days, the Battle of the Somme was the bloodiest battle of the First World War.

It is estimated 24,000 Canadian and 23,000 Australian servicemen also fell in the four-month fight.

The British and French joined forces to fight the Germans on a 15-mile-long front, with more than a million-people killed or injured on both sides.

The Battle started on the July 1, 1916, and lasted until November 19, 1916. The British managed to advance seven-miles but failed to break the German defence.

On the first day alone, 19,240 British soldiers were killed after ‘going over the top’ and more than 38,000 were wounded.

But on the last day of the battle, the 51st Highland Division took Beaumont Hamel and captured 7,000 German prisoners.

The plan was for a ‘Big Push’ to relieve the French forces, who were besieged further south at Verdun, and break through German lines.

Although it did take pressure off Verdun it failed to provide a breakthrough and the war dragged on for another two years.