‘Footy training, push ups and sit ups, salad roll for lunch’: Incredible note written by a young Dustin Martin shows why the freak footy talent was always destined to be an AFL star

A young Dustin Martin spent his childhood playing football with his siblings and writing notes about what he would need to become an AFL superstar.

Now one of the most well-known players in the game, the Richmond Tigers midfielder set an exercise and diet regime as a boy that would help shape him into the player that he is today.

The note was titled ‘my fitness routine to be an AFL star’ and included two days of football training and three rest days over the weekend.

On his days off football training, Martin would do push ups, sit ups and run laps.

In addition to the fitness schedule, Martin planned to eat Nutri-Grain and Vita Brits for breakfast paired with a salad roll for lunch and a choice of orange juice or water to drink.

But she told the Herald Sun both Dustin and her two other boys, Tyson and Bronson enjoyed fueling their bodies with good food.

Kathy previously said she knew her middle son was destined to play AFL by the time he was five. 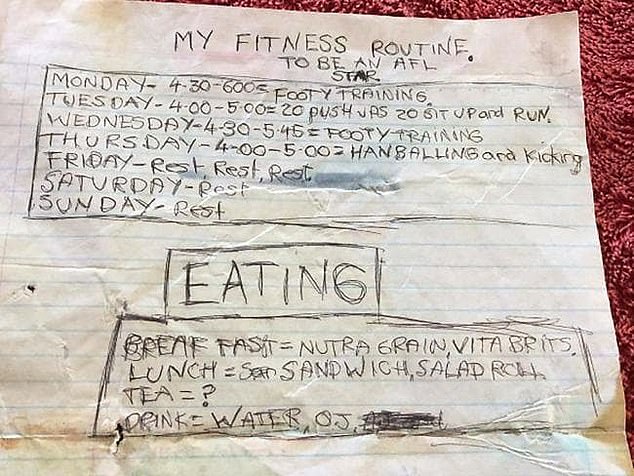 ‘As soon as he put a football in his hands… We all knew he was born to play AFL. He’s just getting better and better and better, and he’s only going to get better again next year.’ she said.

He and his brothers – one older and one younger – created an AFL pitch in their backyard in Yapeen, a 10 minute drive out of Castlemaine in regional Victoria.

They lived on three acres and often turned the property into a football field or cricket pitch.

In the winter, Kathy allowed the boys to play football in the house.

‘I didn’t care about the walls, they can be fixed, and boys have to burn off some energy,’ she said.

The 28-year-old found himself at the centre of attention this week ahead of his grand final clash against the GWS Giants after he opted to attend the Brownlow Medals stage for the third year running.

Martin is notoriously private about his relationships and life away from the field – a trait his mother said he has carried since childhood.

She described Martin as a team player who often shied away from the limelight. 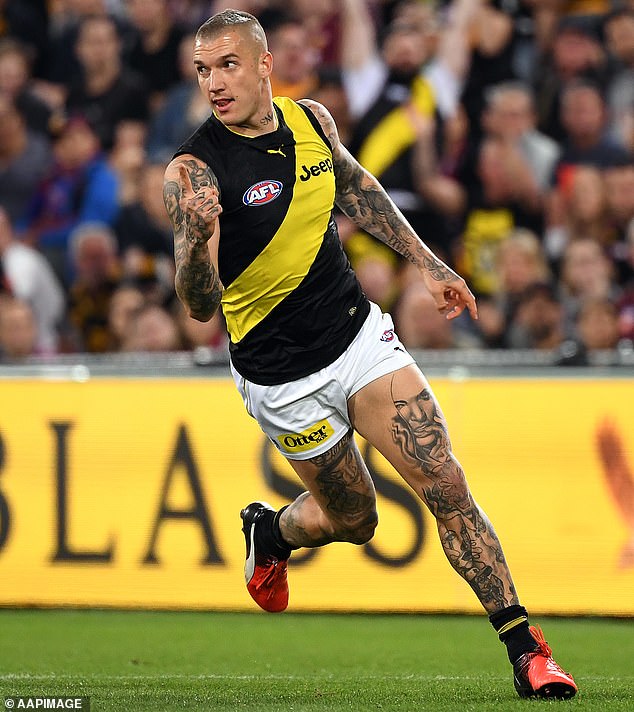 This year Dustin looked typically polished in a classic black suit, which he paired with a black tie.

Inside, he was seen chatting with several other attendees, including his Tigers teammate Josh Caddy.

His manager, Ralph Carr refused to comment when asked about the footballer’s relationship status.

‘It is our firm policy that neither we or Dustin make comment on his private life,’ he said.