Rihanna and A$AP Rocky MARRY each other in D.M.B. music video, as rapper makes his directorial debut

Rihanna and A$AP Rocky get hitched in the Harlem-bred rapper’s latest music video for the song D.M.B, which stands for ‘dat’s my b**ch.’

The two are seen kissing as she has on a red wedding dress and veil and he sports a black suit. He flashes a grill that says ‘Marry Me’ and she has a grill too; hers says ‘I Do.’

The 33-year-old music artist took to Instagram on Thursday to alert fans to the release of the self-directed video, which was shot last year. ‘PROUD 2 ANNOUNCE MY DIRECTORIAL DEBUT D.M.B. VIDEO OUT NOW!!!’ he wrote in a caption.

Art imitating life? Rihanna and A$AP Rocky get hitched in the Harlem-bred rapper’s latest music video for the song D.M.B

A$AP shared two stills from the video in his post, and also included a promotional poster titled A Ghetto Love Tale.

He continued in the caption, ‘THANK$ 2 ALL INVOLVED WHO HELPED & $PECIAL THANK$ 2 MY LADY FOR THE MOTIVATION & ROLE.’

The upload was quickly liked by hundreds of thousands of his 14.7 million followers on the popular app.

The first snapshot showed the expectant parents sitting on a fire escape in his and hers neon-colored fur fashion pieces. 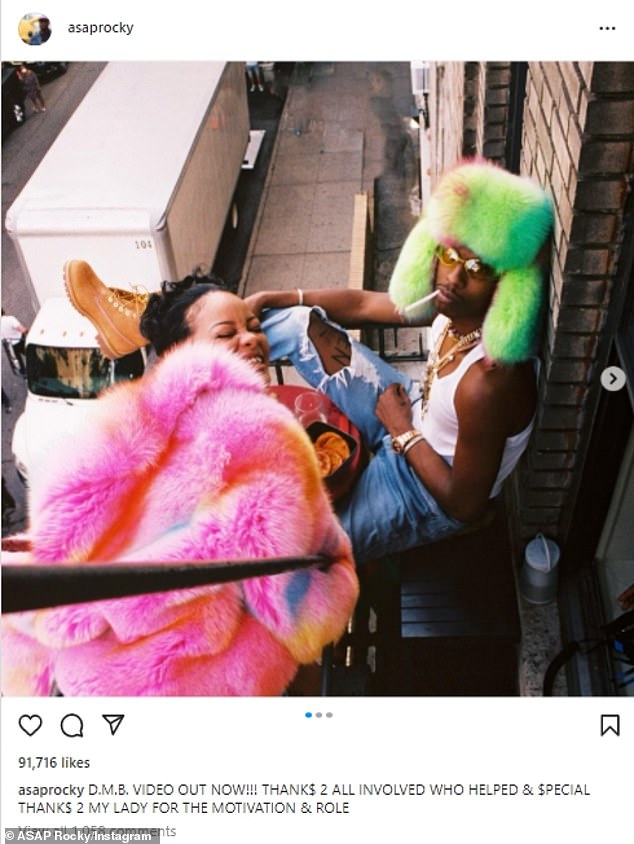 Social media post: The 33-year-old music artist took to Instagram on Thursday to alert fans to the release of the self-directed video, which was shot last year

The Bajan pop singer, who’s now in the third trimester of her high-profile pregnancy, grinned in the image, showing off a gold grill.

She was clad in a bright pink coat as the two looked up at the camera. For his part, Rocky – real name Rakim Mayers – wore a lime green trapper hat.

He sported a pair of sunglasses and draped his neck in multiple gold chains. 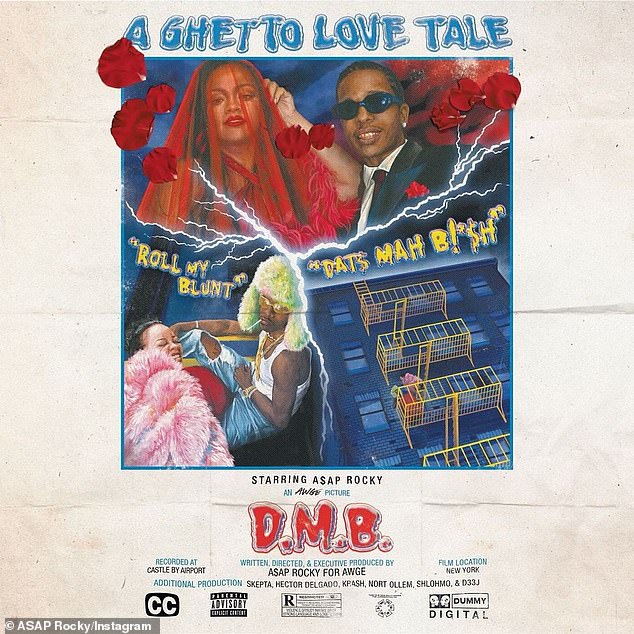 Artsy: The poster image was designed to have a vintage feel, and featured lyrics from the track in quotations 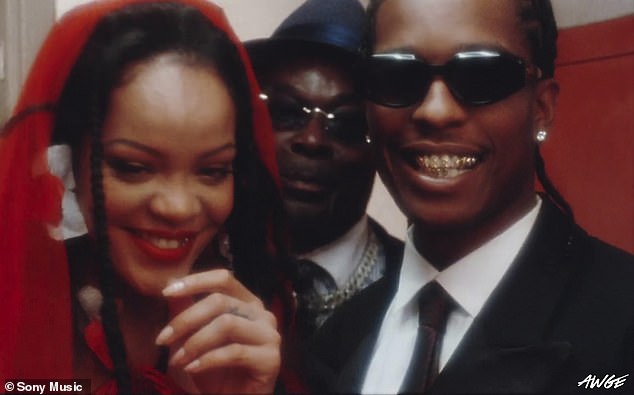 Giddy: The happy couple couldn’t help smiling as they joined hands in marriage 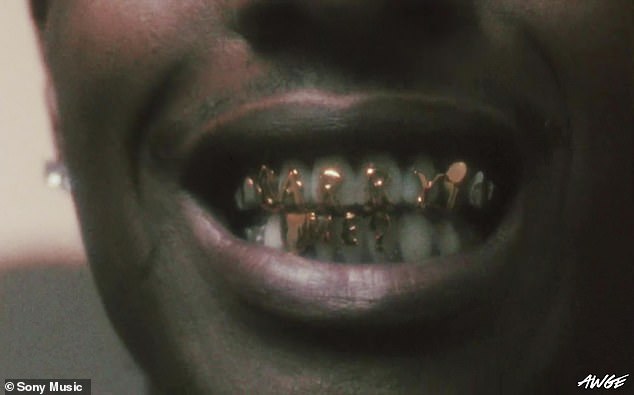 Message: A$AP rocked a gold grill that proposed, ‘Marry me?’ 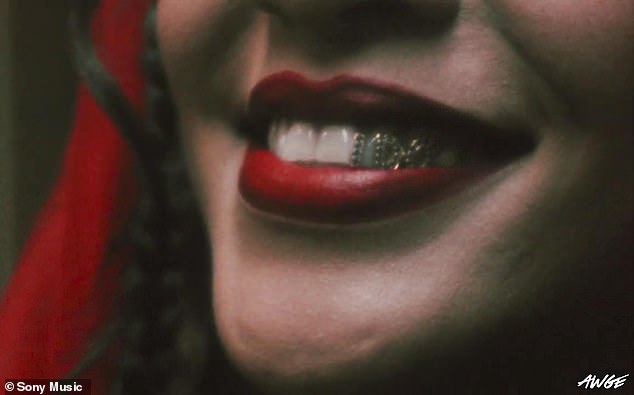 It’s a yes! Rihanna’s grill corresponded with her man’s and answered, ‘I do’

The poster image was designed to have a vintage feel, and featured lyrics from the track in quotations.

One line was stylized to read ‘Dat$ mah b!$h,’ which is what the title’s initials stand for.

Another line said, ‘Roll my blunt,’ appropriately placed, as the twosome are featured rolling and smoking joints throughout the nearly five-minute production. 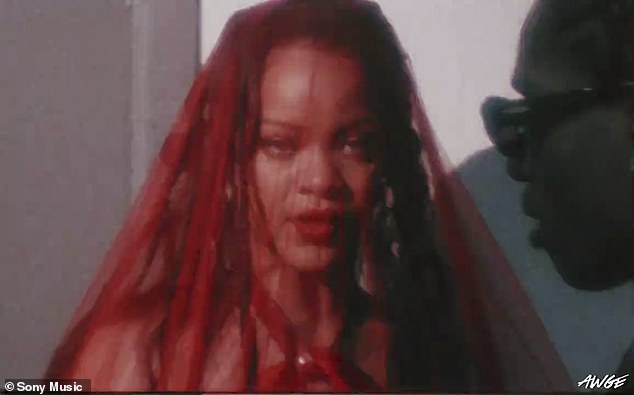 Gorgeous: Rihanna was draped in a blood red veil that matched her matte red lipstick

Riri and Rakim were spotted working on the video back in July as they filmed together in the Bronx.

New York is also where the couple took to announce the songstress’ pregnancy back in January.

Taking to the streets of Harlem, the superstar debuted her burgeoning belly in a vintage pink Chanel winter coat that she left open to expose her stomach.

The twosome made a statement as they walked hand-in-hand during a snowstorm in pictures snapped by celebrity photographer Diggzy. 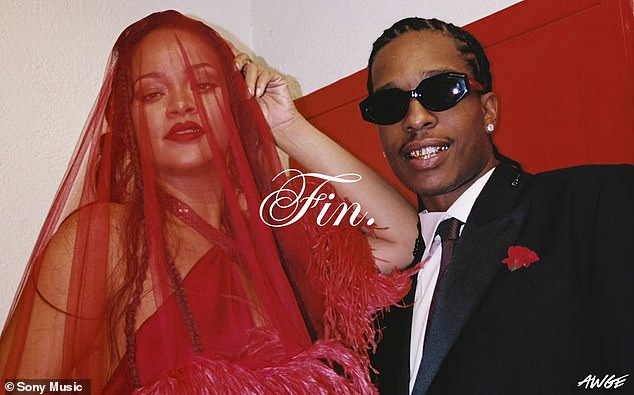 Happily ever after: The video ended on a shot of the newlyweds that said ‘Fin’