Rio Ferdinand has suggested Casemiro will feel ‘disrespected’ over his non-selection from the start in Manchester United’s defeat Manchester City.

Casemiro watched on as his team-mates fell to a 4-0 deficit by half-time, with City’s four-pronged attack of Jack Grealish, Phil Foden, Kevin De Bruyne and Erling Haaland running rampant.

The Brazilian was eventually introduced for Scott McTominay on the hour mark, but by that point his opportunity to greatly influence the game had long since passed.

Speaking the day after United’s chastening defeat that appeared to further evidence the chasm between the two clubs, Ferdinand said he would be ‘surprised’ if United’s £70m summer acquisition was not feeling ‘disrespected’ at his current non-selection in the Premier League, with Erik ten Hag so far having preferred McTominay.

‘He ain’t been given a start in the team when he’s fit and ready, he’s regressed in terms of fitness, so he’s now worse off than when he came. He still had to get up to speed when he came from that league to this league,’ he added. 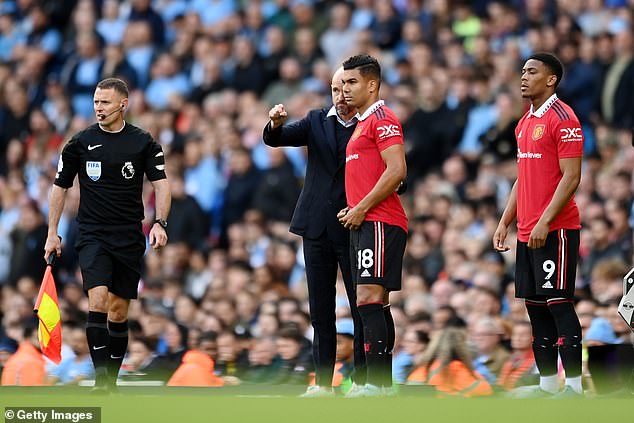 ‘I wonder the impact it’s having on someone like him. Yes he’s experience and whatnot, but he must be sitting there thinking, “wow, I’m happy to be here at Man United but I’m feeling a little bit disrespected here, given what I’ve done”. I’d be surprised if he’s not feeling like that.

‘I think we will [see Cristiano Ronaldo and Casemiro play], but I think it’s the context of what games they’re playing in – they could be playing midweek Europa game. That won’t sit well with them.’ 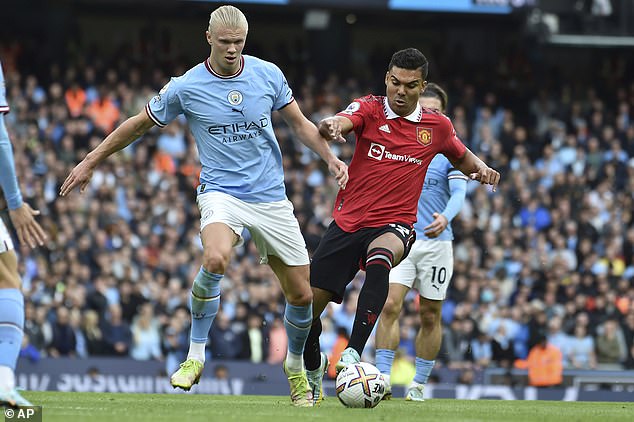 Ferdinand went on to add that Ten Hag was now seeing the difficult ‘sub-plots’ of squad management, issues the former England defender said he did not have to deal with at Ajax.

‘These are the sub-plots to what Ten Hag has to deal with. This is what management is about, he’s got to manage that type of player, that type of ego, the pride that comes with these types of players,’ he said.

‘If you’re not playing, you’ll see a difference in the way they look at you now, and that’s what you’ve got to manage. 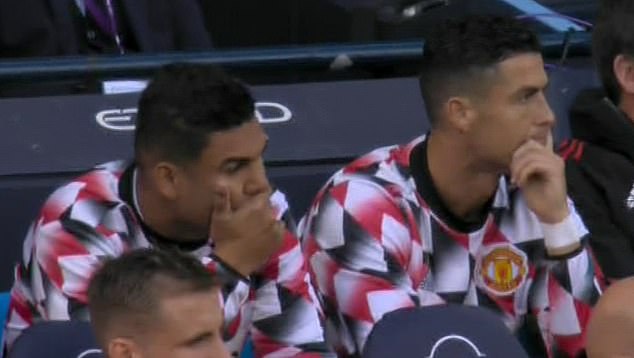 The two former Real Madrid team-mates, Casemiro and Cristiano Ronaldo, cut solemn figures on the bench as they watched their side fall to a 4-0 deficit at the break

‘He didn’t have those problems at Ajax with the players he had, he was very much in control, the master of the universe there. Here you’ve got big egos to deal with and this is the task when you come to a top club.’

Ferdinand went on to pour scorn on the idea that Casemiro was incompatible in midfield alongside Christian Eriksen and Bruno Fernandes, saying he had managed to play with two ‘snails’ in Toni Kroos and Luka Modric at Real Madrid.

‘I’ve heard people today say, “if he plays he needs legs around him, he can’t play with Eriksen and Bruno”. This geezer played with two snails in [Luka] Modric and Toni Kroos – he just knows his way around a football pitch.’

Meanwhile, Ten Hag also faced criticism from Roy Keane over his ‘disrespectful’ treatment of Ronaldo in the defeat at City. 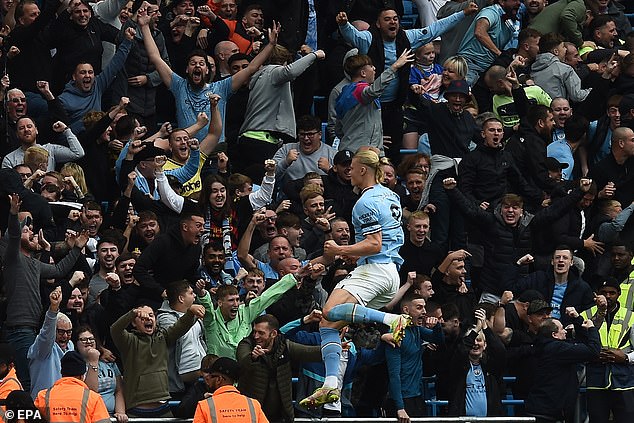 Keane told Sky Sports:  ‘I think Man United are showing disrespect to Ronaldo. I think he should have been let go before the [closing] of the window.

‘If he’s sitting on the bench for United, week in, week out it’s just going to get uglier. I think United have shown nothing but disrespect to Ronaldo.’