Robert Redford has hinted that his latest film ‘The Old Man and the Gun’ may not be his last.

Redford, 82, had said the movie, which Fox Searchlight will release September 28, will be his final one as an actor.

The news, with palpable affection, ricocheted around the world.

But now, he has hinted that David Lowery’s ‘The Old Man and the Gun’ – in which he plays elderly bank robber Forrest Tucker – may not be his last after all.

‘I didn’t expect that kind of response,’ Redford chuckles, speaking by phone from his house in Santa Fe. ‘Now I can’t say I was just kidding!’

‘But I did say ‘Never say never,” he adds, giving himself an out.

‘I just figure that I’ve had a long career that I’m very pleased with. It’s been so long, ever since I was 21.

‘I figure now as I’m getting into my 80s, it’s maybe time to move toward retirement and spend more time with my wife and family.’

That Redford might be hanging it up has the unmistakable feel of an era passing.

For many, his face – from sandy-haired California boy to weathered mountain man – has charted half a century of something intrinsically American.

His Sundance Kid, his Jeremiah Johnson, his Bob Woodward are figures of rigorous self-determination.

From the young C.I.A. agent in ‘Three Days of the Condor’ to the aged sailor in ‘All Is Lost,’ they are smooth-sailing romantics whose quiet ways are violently capsized.

‘For me, the word to be underscored is ‘independence,” says Redford. 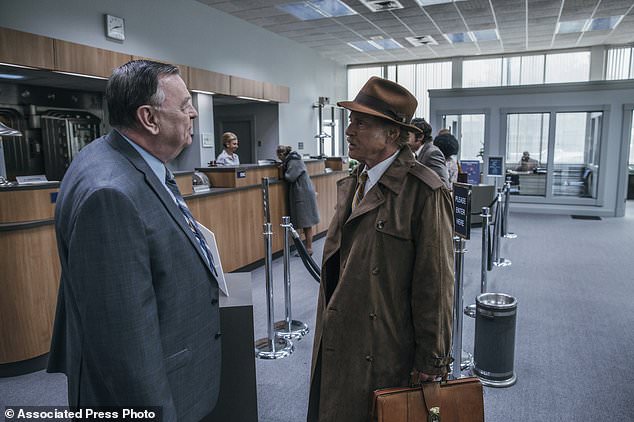 Gene Jones, left, and Robert Redford in a scene from the film, ‘The Old Man & The Gun’

‘I’ve always believed in that word. That’s what led to me eventually wanting to create a category that supported independent artists who weren’t given a chance to be heard.

‘The industry was pretty well controlled by the mainstream, which I was a part of. But I saw other stories out there that weren’t having a chance to be told and I thought, ‘Well, maybe I can commit my energies to giving those people a chance.’ As I look back on it, I feel very good about that.’

It was through the Sundance Institute, the nonprofit he founded in 1981 for independent filmmaking that puts on the Sundance Film Festival, that Redford met Lowery, the 37-year-old director.

Shortly after Lowery’s ‘Ain’t Them Bodies Saints’ premiered at Sundance, he met with Redford, who expressed his interest in making a movie based on Tucker, a lifelong stickup man and prison escapee whom David Grann profiled in the New Yorker .

Lowery then wrote a script that became ‘The Old Man and the Gun.’ 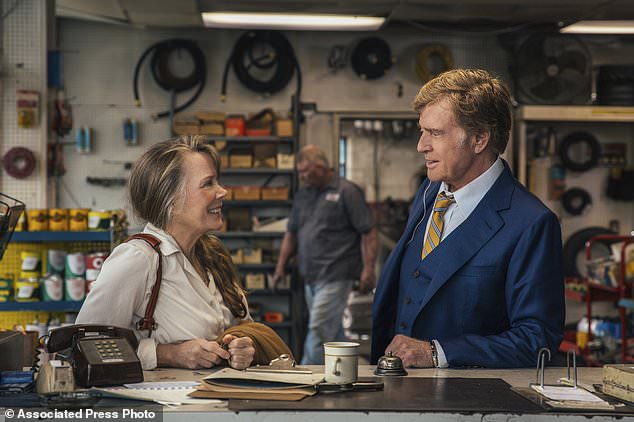 Sissy Spacek, left, and Robert Redford in a scene from the film, ‘The Old Man & The Gun’

It wasn’t until shortly before shooting that his phone lit up after Redford, in an interview, suggested this might be his last movie.

‘My first thought was, boy, pressure’s on. My second thought was that I needed to completely ignore that pressure and not let it influence the movie. I actively worked against it feeling like grand summation,’ says Lowery.

‘But I did want to tap into what makes Robert Redford a movie star and acknowledge where he came from and what he’s done. It wasn’t meant to be a swan song but if it winds up being a bookend, hopefully it’s a fitting one.’

And as a capstone for Redford, the ’70s-set ‘The Old Man and the Gun’ is indeed poignant.

It bears much of the spirit and twinkle of some Redford classics, like ‘Butch Cassidy and the Sundance Kid’ and ‘The Sting,’ only as filtered through Lowery’s lyrical naturalism. And Redford is again on the other side of the law.

‘The idea of the outlaw has always been very appealing to me. If you look at some of the films, it’s usually having to do with the outlaw sensibility, which I think has probably been my sensibility. I think I was just born with it,’ says Redford. 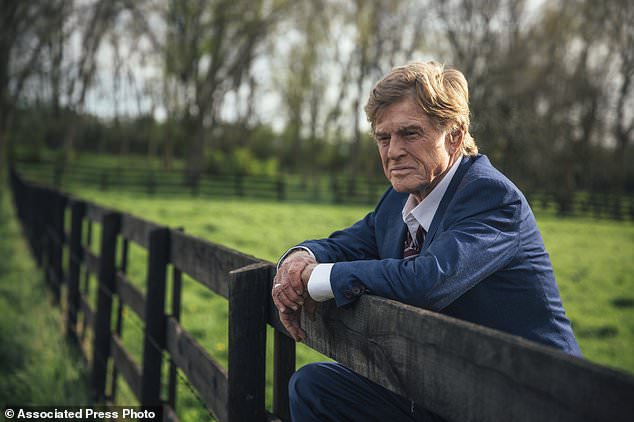 Redford has said the movie, which Fox Searchlight will release September 28, will be his final one as an actor

‘From the time I was just a kid, I was always trying to break free of the bounds that I was stuck with, and always wanted to go outside.’

In the film, Redford’s partners are played by Danny Glover and Tom Waits; Sissy Spacek plays the love interest of the smitten Tucker; and Casey Affleck plays the police detective pursuing Tucker even as his esteem for the bank robber grows.

Redford has kind words for them all but especially for Affleck. ‘I think the world of him,’ says Redford. ‘I just think he’s a really special, talented guy.’

Redford still has hopes of directing one or two more films, but he likes the idea of going out as an actor with an upbeat movie.

Many have compared today’s White House investigation to Watergate, which he so memorably chronicled in ‘All the President’s Men.’

Redford still loves talking about the film, like the light-and-dark interplay by cinematographer Gordon Willis.

‘There were no shadows in the newsroom,’ he says. ‘Once you leave that newsroom, you step into darkness.’

But as to any relation to today, he demurs. ‘I try not to think about today’s politics,’ says Redford. ‘Otherwise you get too depressed.’

‘The hope is that ‘The Old Man and the Gun’ will put a smile on an audience’s face. That’s something I think we could sure use right now.’