Italian chef Andrea Tranchero has revealed the exact meal Roger Federer eats before every game at the Australian Open – as he shares the ‘match winning’ recipe.

The executive chef and his team have been serving authentic Italian cuisines to tennis fans and elite athletes at a ‘Masters of Pasta’ pop-up restaurant during the sporting tournament in Melbourne.

Speaking to Daily Mail Australia, the chef – who has worked in Michelin-starred restaurants around the world – said the world No. 3’s ‘favourite dish’ he always fuels up on before every match is spaghetti pomodoro.

Scroll down for the recipe

Italian chef Andrea Tranchero (right) revealed Roger Federer’s favourite meal he eats before every match at the Australian Open is spaghetti pomodoro (pictured of the chefs preparing Federer’s order before his match against Australia’s John Millman on Friday, January 24) 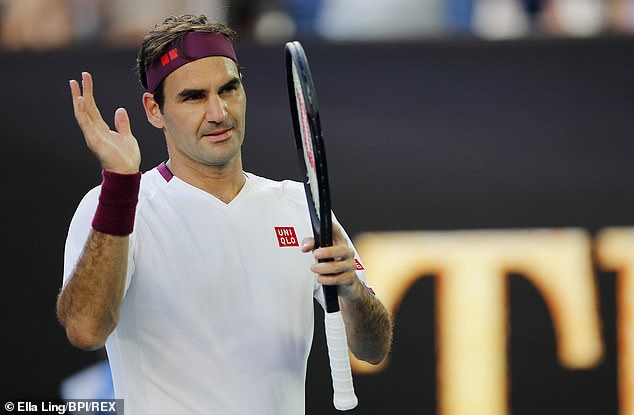 The world No. 3 has been eating a humble bowl of spaghetti pomodoro before every match at the Australian Open (pictured waving at the crowd after surviving seven match points to reach the semi finals following a thrilling five-set win over world No. 100 Tennys Sandgren) 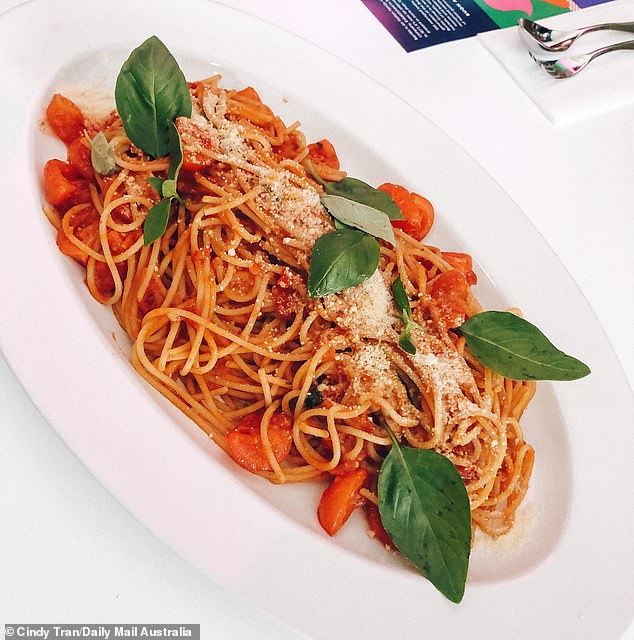 Why are carbohydrates so good for elite athletes?

Sports dietitian Simone Austin has explained the role of carbohydrates for sports performance.

She said eating a serving of pasta won’t undo your hard work because you can eat it in amounts to suit your needs and it offers long-lasting energy, which is particularly important for tennis players.

Ms Austin said eating pasta al dente is better because it takes longer for your body to digest. Al dente pasta will release energy more gradually and keep you fuller for longer.

She added when you cook and cool the pasta, there is the added bonus of forming ‘resistant starch’, which has many health benefits including helping the healthy bacteria to thrive.

‘Roger orders spaghetti pomodoro from the restaurant. We deliver one portion to Roger and his team three hours prior to his match,’ Mr Tranchero, who’s Barilla Australia’s executive chef, said.

‘[There are] no unusual requests [from Roger], the order is always for the same, simple and classic dish.’

The chefs take ‘approximately 20 minutes’ to prepare the Swiss Legend’s meal in the kitchen.

‘The whole team is incredibly honoured to be preparing pasta for Roger and his team over this time,’ Mr Tranchero said.

Describing the dish as a ‘match winning pasta’, he explained how ‘carbohydrates are part of a healthy, balanced diet’, especially for elite athletes.

‘Many elite athletes choose to eat pasta before their matches or competitions in preparation for the physical demands of their sport,’ he said. 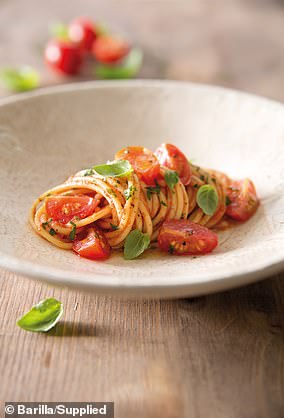 1. Bring plenty of water to the boil, then add rock salt. We recommend 7 grams per litre of water.

2. Drop the Spaghetti in the water and stir.

3. In a large fry pan, gently heat half the olive oil. Add onion and garlic and cook until golden.

4. Add the Basilico sauce and season with salt and pepper. Cook the sauce over medium heat, stirring occasionally for about 3 minutes and then remove the garlic clove.

5. Cook the pasta one minute less than the instructions on the packet, drain and mix with the tomato sauce. Add cherry tomatoes and finish cooking pasta in the sauce.

6. Remove from the heat, add fresh basil and serve with a drizzle of olive oil.

When cooking pasta in a large pot, Mr Tranchero recommended adding seven grams of rock salt per litre of water.

He said the pasta should be ‘dancing’ in the water – but if your spaghetti appears crammed, you should invest in a larger pot.

During the cooking process, he advised against adding olive oil to the water because the trick doesn’t actually stop pasta from sticking together.

‘It does nothing. The oil floats to the top, while the pasta sinks,’ he explained.

Once your pasta is cooked al dente, the best thing to do is drain it, and then drizzle extra virgin olive oil over the top.

He said you should never rinse the pasta with tap water after it is finished boiling because you’re washing off the starch that binds the pasta to the sauce.

The cooking time for pasta is usually eight minutes – but Mr Tranchero said if you’re cooking with sauce and/or protein, you should only cook for six minutes before transferring it from the water straight into the pan. 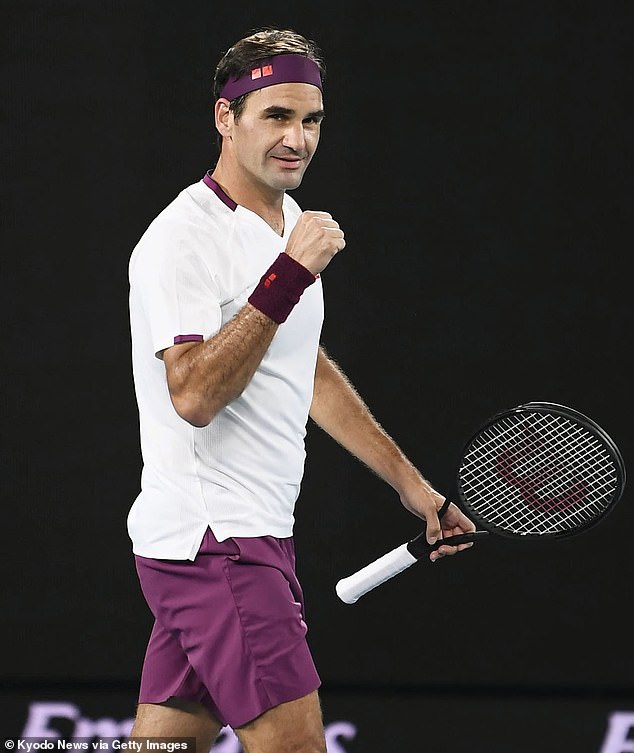 ‘Our bodies like carbohydrates for fuel. It stores carbohydrates as glycogen in the muscles and liver. For it to do this, we need to eat and then digest foods with carbohydrates such as pasta,’ she said.

‘This supplies energy that is instantly accessible to the muscle which is important for the tennis player – think about a sprint to the net. As a tennis match can go on for some time, an athlete’s muscle glycogen levels need to be full.

‘A game lasting longer than 90 minutes, which many do, is entering the zone of an endurance sport. Carbohydrates need to be eaten prior for fuel, and then also for recovery to refuel and prepare the body for the next match in a day or two.

‘An athlete may have a bowl of pasta two or three hours before the game, eating enough to be comfortable and not too heavy.’ 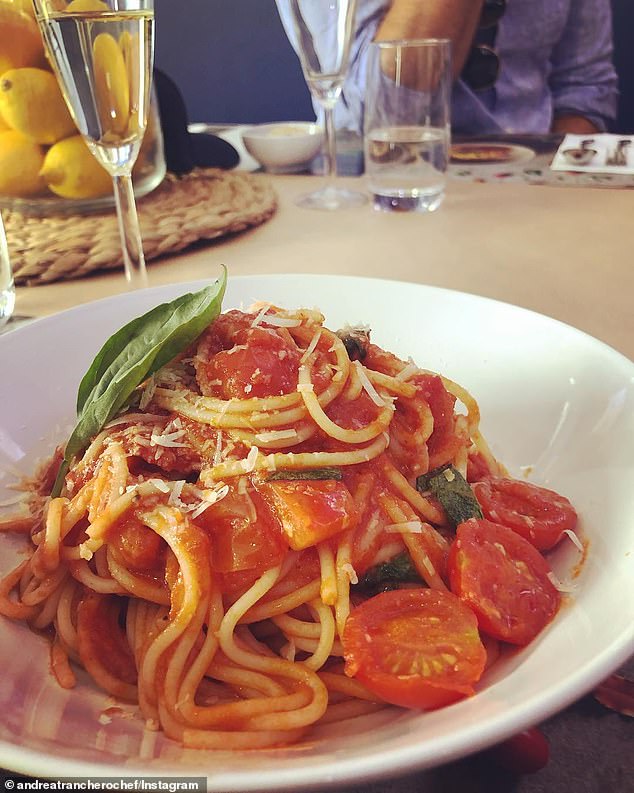 Mr Tranchero revealed he delivered this spaghetti pomodoro to Federer just hours before he beat UK’s Daniel Evans in straight sets on January 16, 2019

She said it’s very crucial to keep pasta al dente because the firm texture allows your body to digest more slowly and have a lower glycaemic index (GI).

‘This will raise blood glucose levels more gradually, supplying energy over time. If energy is needed quickly, cook the pasta more so it can be digested faster,’ she said.

‘For most of us who are not playing tennis for hours, the al dente style is definitely the way to go. It is likely to keep us full for longer as it will be digested more slowly, and also has a lower glycaemic index.’

Ms Austin said if you have leftover cooked pasta, ‘save extra for the next day’ because there are some health benefits.

‘When the pasta cools it forms some resistant starch,’ she said.

‘This is not able to be digested in the small intestines and moves to the large intestines, similar to other types of dietary fibre. Here it acts as a prebiotic fibre – becoming food for our good gut bacteria.

‘The gut bacteria ferment the resistant starch, producing short-chain fatty acids (SCFA) that are important to the health of the colon and stimulate the good gut bacteria that live there to thrive.

‘We are learning more every day about the importance of good gut health for your overall health which has an impact on athletic performance.’