ROLAND WHITE reviews last night’s TV: Mr Crafty, the man who lifted the World Cup, but not for England

By Roland White For The Daily Mail

The 1960s were truly a golden age. Back then, a cheery South London villain could visit an exhibition of temptingly expensive stamps, spot the World Cup, an added attraction unguarded on a nearby plinth, and smuggle it out underneath his coat.

What’s more, he would never be caught.

Sidney ‘Mr Crafty’ Cugullere didn’t even have to be that crafty. As 1966: Who Stole The World Cup? (C4) noted, security guards at the exhibition were in the basement, enjoying a tea break.

The cheeky thief put the Jules Rimet Trophy on his mantelpiece until the full force of the law descended upon him. Not the police, but his wife Nell, who furiously ordered him to get rid of it.

As any pub quizzer knows, the cup was discovered by Pickles the dog, whose owner David Corbett (pictured) went straight to the local nick

For a while, the cup was hidden in a coal bunker in Luton, until Sidney dumped it under a hedge in South London.

With its 1960s music and archive footage, this was a bit like watching Endeavour or Heartbeat. There was even the odd comic moment.

As any pub quizzer knows, the cup was discovered by Pickles the dog, whose owner David Corbett went straight to the local nick.

Corbett briefly became the chief suspect but luckily had an alibi for the theft. He claimed the £5,000 reward and bought himself a house in Surrey.

Pickles became a national hero but came to a sad end. Chasing a cat up a tree, he was strangled by his lead. 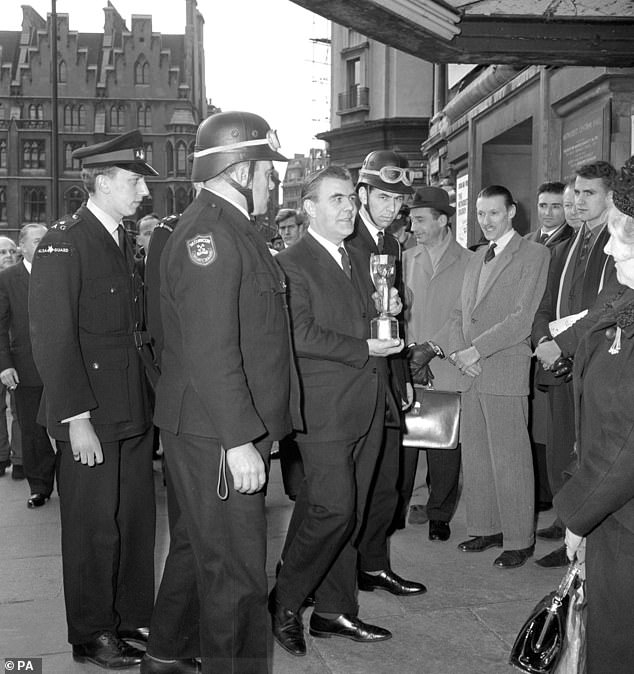 Cugullere’s role in the theft was only revealed after his death. And what of the cup? After Brazil won it three times, they were allowed to keep the trophy. It was then stolen from that country’s FA headquarters, possibly by a Senor Crafty, and never seen again.

If you despair of our politics — and who doesn’t at the moment? — watch Hong Kong’s Fight For Freedom (BBC2) on iPlayer and thank the Lord you don’t live in China.

WARNING OF THE WEEK

Not enough to worry about at the moment? According to The End Of The Solar System (BBC4), the Andromeda galaxy is on a collision course to hit our own Milky Way, causing a celestial spectacular. No need to take cover yet — this won’t happen for another four billion years.

This two-part documentary recalls the violent pro-democracy demonstrations of 2019 in Hong Kong, where the police cornered protesters in tube trains and beat them with batons, yet were mysteriously absent when pro-China vigilantes launched a violent attack on pro-democracy supporters. Staff shortages, apparently.

The origins of the protests lay in the murder in Taiwan of 20-year-old Amber Poon Hiu-wing by her boyfriend. As there was no extradition treaty between Taiwan and Hong Kong, he could not be charged.

When Hong Kong drew up plans to change this, they also decided to allow suspects to be sent to mainland China.

Fear of retribution still exists: students who spoke to the BBC were not only given false names, but computer-generated false faces.

One young woman told how her hip was dislocated by a police attack, but she dared not go to hospital: ‘You never know if a doctor or nurse might report you to the police.’ The protesters had their own medical teams.

Yesterday’s episode ended with the prospect of intervention from Beijing, where an official announced: ‘Those who play with fire will burn themselves.’

Christopher Stevens is away.