Rolls-Royce is planning to use its attempt on the world all-electric air-speed record this year as a launchpad to develop flying taxis.

The 115-year-old engineering giant has built an electric plane, called the Spirit of Innovation, with the aim of reaching speeds of 300mph – breaking the record of 210mph set by Siemens in 2017.

The attempt will see the aircraft complete a set course at Boscombe Down in Wiltshire, a Ministry of Defence site, in the spring.

Battery power: The Spirit of Innovation is set to fly at 300mph

Rolls-Royce electrical director Rob Watson told The Mail on Sunday the type of batteries created for the record bid was similar to the technology that would be required to propel air taxis. He said: ‘We always hoped to capture the public’s imagination and run a project where we would learn some substantive engineering insights and both of those have happened.

‘When this aircraft flies, it’s going to be hugely exciting just because of the spectacle and also because it’s confirmed our ability to deliver transformational technology.’

United Airlines last week revealed plans to buy 200 flying electric taxis from specialist Archer to carry passengers to the airport within the next five years in a $1billion deal.

Rolls-Royce’s Matheu Parr, who is managing the airspeed record project, added: ‘You think about these aircraft taking off from the top of buildings, almost hovering before they then move forwards and take you to your destination.

‘The characteristics those systems require out of batteries is really similar to what we need out of driving an aircraft really fast to get a record speed, so the absolutely brilliant technology we’re able to lift straight out of this project and think about how can we view it in the market.

‘We’re looking at bringing a portfolio of motors, power electronics and batteries into the general aerospace, urban air mobility and small commuter aircraft. We absolutely believe in this market, we believe it’s coming and faster than every body recognises.’ The £6.4million air-speed record project has received half of its funding from the Government and has seen Rolls team up with electric storage start-up Electroflight and motor-maker YASA. 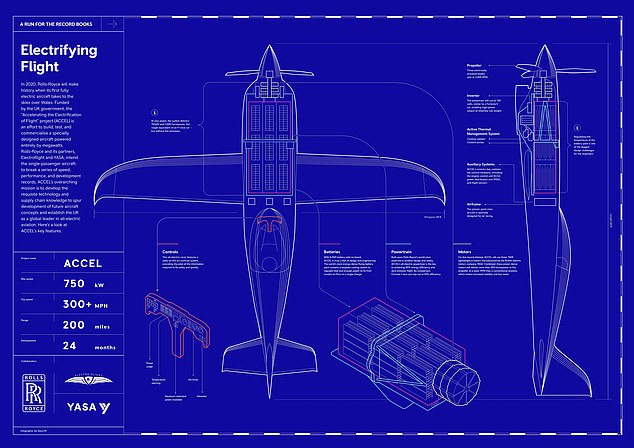 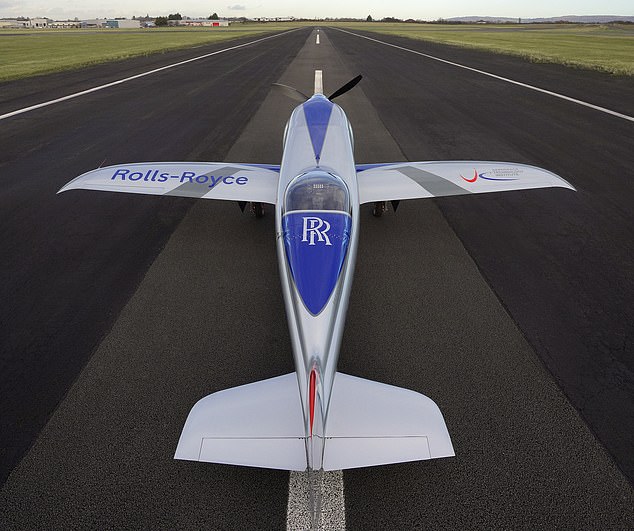 It features the most power-dense battery pack ever assembled for aircraft propulsion, capable of supplying enough energy for 250 homes. Ground testing has been completed at Gloucestershire Airport and taxi testing will take place at Boscombe Down.

Parr said the technology had given Rolls an insight into battery behaviour, safety and reliability as it expands in the electrical vertical take-off and landing vehicle (eVTOL) market, which includes individual passenger transport, cargo and medical flights.

The idea of flying taxis has long been discussed, but progress has been slow. Ride-hailing specialist Uber dampened spirits in December, selling its loss-making division specialising in the vehicles, in partnership with Hyundai.

But there are signs of activity in the UK: Vertical Aerospace, a Bristol-based electric aircraft manufacturer, is working on a feasibility study with engineering giant Atkins.

And last month, it emerged a hub is to be built in Coventry by start-up Urban Air Port, which will be operational by November.

Rolls has embarked upon a string of electrification projects including developing full and hybrid electric trains, boats and helicopters.

However, the Covid-19 crisis in the travel market has plunged Rolls’s civil aerospace division into turmoil. Chief executive Warren East has slashed thousands of jobs and raised £5billion to shore up the firm’s finances.

But Watson revealed that the engine maker has accelerated development of full and hybrid electric propulsion systems for aircraft up to 18 seats due to an increase in demand. These include an all-electric, twin-engine 11 seat commuter aircraft, powered by renewable energy developed with Italian manufacturer Tecnam.