Ronan Farrow facing criticism for his reporting around #MeToo

For almost three years since he published his first story on Harvey Weinstein, Ronan Farrow has risen to become one of America’s premier investigative journalists – both feared and adored among elite circles.

Aged just 32 he has a Pulitzer Prize to his name, a best-selling book under his belt, and can lay claim to helping start the #MeToo movement which brought down a string of powerful men – most significantly Weinstein, who was jailed for sex assault and rape earlier this year.

The son of Woody Allen and Mia Farrow, he began his journalistic career with op-eds and columns before moving into TV news and eventually hard-nosed investigative reporting for network NBC – jumping ship to the New Yorker magazine in 2017 after accusing his old employer of trying to bury his reporting on Weinstein.

But serious questions are now being asked about some of his reporting – from #MeToo to the Russia-gate scandal – with holes being picked in some of his most compelling narratives.

Matt Lauer, a former star anchor of Farrow’s old network NBC and one of the men accused of rape in his reporting, described his work this week as ‘shoddy journalism.’ 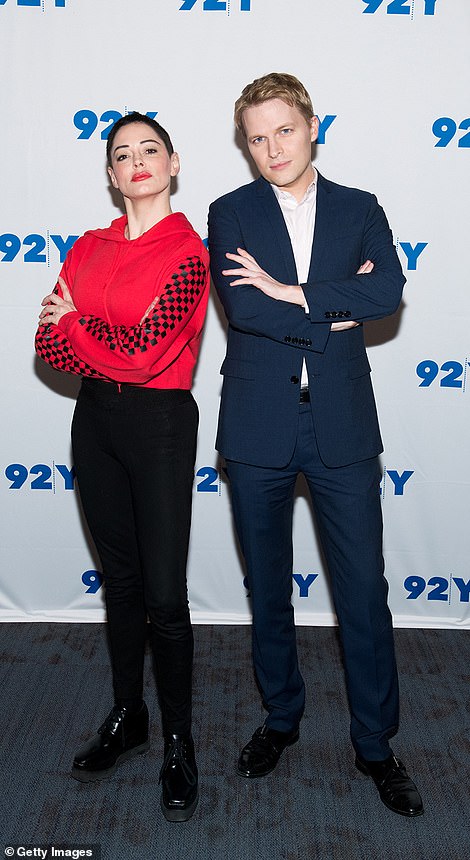 Ronan Farrow (left in 2019 at Time magazine’s 100 most inflential people gala, and right with prominent #MeToo figure Rose McGowan) has risen to prominence thanks to his reporting for the New Yorker, starting with his expose of Harvey Weinstein

The allegations, detailed at length in a column in the New York Times, include that he relies too much on hearsay and conspiracy, has sometimes failed to carry out basic fact-checking and corroboration of his sources, and can be economical with the truth.

‘He delivers narratives that are irresistibly cinematic — with unmistakable heroes and villains,’ Ben Smith writes for the Times, ‘and often omits the complicating facts and inconvenient details that may make them less dramatic.

‘At times, he does not always follow the typical journalistic imperatives of corroboration and rigorous disclosure, or he suggests conspiracies that are tantalizing but he cannot prove.’

The same allegations were also levelled against him by Matt Lauer, former star anchor at Farrow’s old employer NBC who lost his job in 2017 after admitting to a improper relationship with a colleague, and who was later described as a rapist in Farrow’s 2019 book Catch And Kill.

Lauer, in a comment piece for Mediaite published in the wake of the Times column, also accuses Farrow of failing to fact-check stories told to him by sources, failing to provide evidence of communications he says took place, and using misleading language to ‘manipulate’ readers.

He says: ‘In some cases [Farrow] undeniably withheld information from the reader that would call the credibility of sources into question. 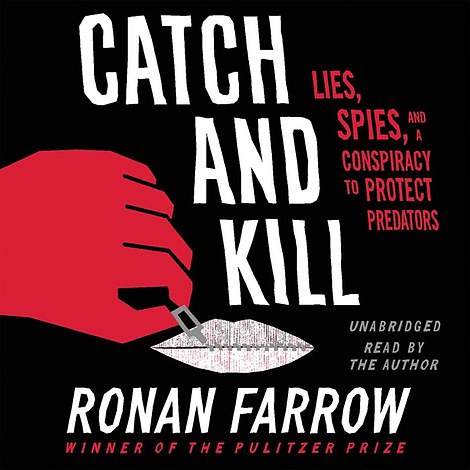 Farrow’s reporting earned him a Pulitzer and spawned a best-selling book (pictured), but now serious questions are being asked about his methods

‘He routinely presented stories in a way that would suit his activist goals, as opposed to any kind of journalistic standards.’

Lauer continues to deny allegations of rape, saying that all contact with accuser Brooke Nevils was consensual. He admits their relationship was inappropriate.

Farrow has described Lauer’s account as ‘just wrong’, adding that his book ‘was thoroughly reported and fact-checked, including with Matt Lauer himself.’

His publisher added: ‘Little, Brown and Company fully supports Ronan Farrow and his reporting in Catch and Kill.

‘Ronan’s dedication to a deep and thorough fact-check of his reporting, his commitment to the rights of victims and his impeccable attention to detail and nuance make us proud to be his publisher.’

In response to the New York Times piece, Farrow said: ‘I’m proud of a body of reporting that has helped to expose wrongdoing and to bring important stories into public view.’

Seemingly destined for great things from birth, Farrow was blessed with striking good looks – but instead relied on a scintillating intellect to mount his enviable climb into the upper echelons of liberal society.

In grade school he was allowed to skip classes to attend the Johns Hopkins Center For Talented Youth before becoming the youngest student ever to attend liberal arts school Bard College at Simon’s Rock aged just 11.

He graduated from parent school Bard College aged 15, and was accepted into Yale Law School aged 16. While there he began working in politics as a UNICEF Spokesperson for Youth.

Leaving Yale with a JD in 2009, the same year he became the youngest employee at Obama’s State Department – working as Special Adviser for Humanitarian and NGO Affairs – aged 21.

After a stint working as a special adviser to then Secretary of State Hillary Clinton, he began studying for a doctorate in philosophy at Magdalen College, Oxford, as a Rhodes Scholar in 2012.

In 2013 he published his first book and began writing op-ed pieces for high-end newspapers and magazines, before going into television as the host of short-lived MSNBC show Ronan Farrow Daily.

By 2016 he had begun speaking out on what he described as a reluctance by journalists to report on allegations of sexual assault by powerful Hollywood figures, which he outlined in a column for the Hollywood Reporter 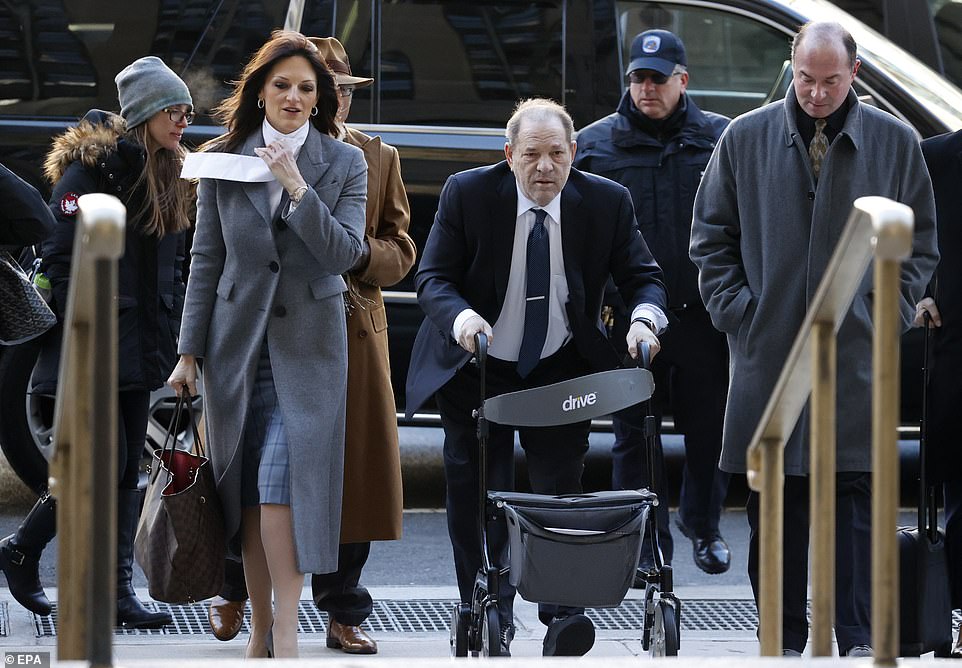 Farrow helped spark the #MeToo movement and his reporting was central to bringing down movie mogul Harvey Weinstein, who was jailed for rape and sexual assault earlier this year

In the piece he spoke at length about allegations his sister Dylan Farrow made against father Woody Allen, claiming he sexually assaulted her aged seven.

That was followed by agenda-setting reporting for the New Yorker which began in 2017, taking on figures from Weinstein to politician Eric Schneiderman, media executive Les Moonves, and Justice Brett Kavanaugh.

Off the back of his reporting, the New Yorker won the Pulitzer Prize the following year, which it shared with the New York Times. In 2019, Farrow published his second book containing more detailed allegations.

But, in examining Farrow’s reporting, the Times shines a light through some of the narrative gaps.

In his initial report on Weinstein, Farrow referenced allegations by Lucia Evans – a college student who claimed the movie mogul forced her to perform oral sex on him in 2004.

Her allegations later formed part of charges against Weinstein at his trial, but were dismissed after it emerged a key witness had refused to discuss details of the alleged incident with fact-checkers from the New Yorker.

She later told a New York Police detective that the encounter was consensual, the Times reports.

Then, in 2018 and while reporting on a different agenda-setting story of alleged Russian collusion with the Trump campaign, Farrow alleged via a source that documents detailing the financial records of the president’s personal lawyer Michael Cohen had gone missing from a government database.

Except, as a Buzzfeed report later clarified, the documents had not gone missing but had merely been moved to a private location to stop them being leaked – as Farrow’s source had done.

Separately, Lauer says Farrow broke ‘the cardinal rule of journalism’ by ‘coming to a self-serving conclusion first, and then he sees everything through the prism of that assumption’.

In his book Catch and Kill Farrow makes the case that NBC shied away from his reporting on Weinstein because several of its executives and personalities, including Lauer, also had sexual harassment allegations in their closets.

But Lauer said Tuesday: ‘At no time did Brooke Nevils ever use the words “assault” or “rape” in regards to any accusation against me while filing her complaint with NBC in November of 2017. That has been confirmed publicly.’ 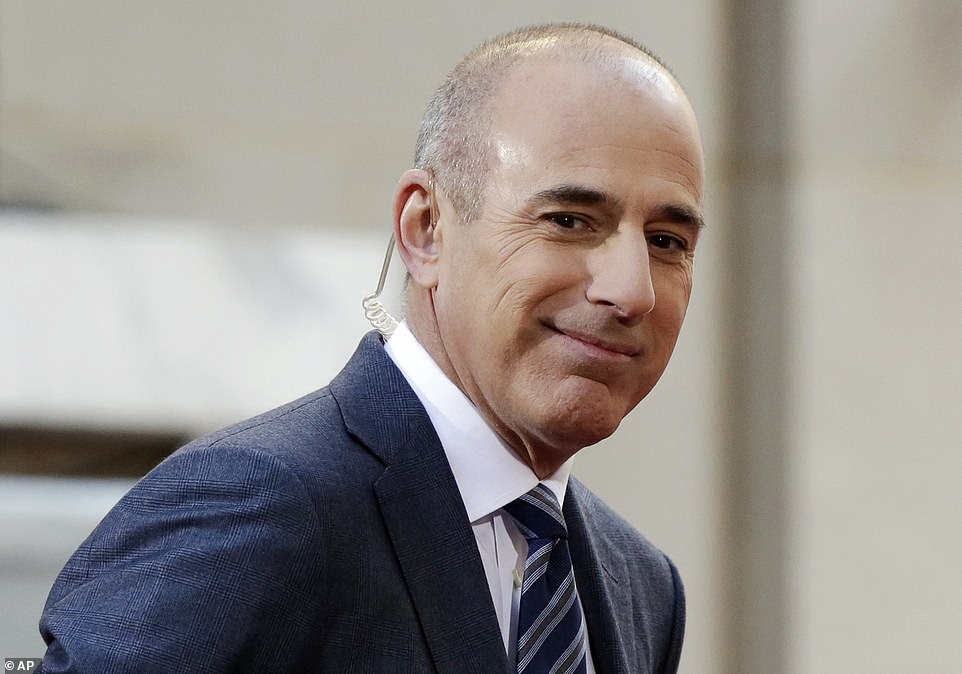 Matt Lauer, a star anchor at network NBC where Farrow once worked, was accused of rape in Farrow’s book – which he has now described as ‘shoddy journalism’, pointing out what he describes as errors in the reporting

He also hit out at Nevils, saying her allegation of rape against him was ‘used to sell books’. He said Tuesday that Farrow had failed to speak with two of Nevils’ ex-boyfriends for the purposes of fact checking in his book claims she had made.

‘I was also disappointed, but not surprised, that Ronan Farrow’s overall reporting faced so little scrutiny’, Lauer added.

‘Until this week’s critical reporting by The New York Times, many in the media perceived his work as inherently beyond basic questioning.’

Lauer had already denied Nevils claims in an angry and defiant letter released by his lawyer last year and said that his public silence since his firing had been a mistake.

Lauer said that he had never assaulted anyone or forced anyone to have sex.

In his letter, he said he ended his relationship with Nevils ‘poorly,’ but that ‘being upset or having second thoughts does not give anyone the right to make false accusations years later.’

Lauer acknowledged other extramarital encounters, and criticized the women involved for having ‘abandoned shared responsibility’ for the affairs to shield themselves from blame behind false allegations.

‘They have avoided having to look at a boyfriend, a husband or a child in the eye and say, ‘I cheated,’ Lauer said. ‘And I will no longer provide them the shelter of my silence.’