From a toddler tantrum to a long-awaited royal proposal, 2017 has been an unforgettable year for the Royal family.

It was the year that the Duke of Edinburgh announced his retirement from public duties, while the Duke and Duchess of Cambridge embarked on a ‘Brexit charm offensive’ in Europe with adorable Prince George and Princess Charlotte in tow.

Shortly after celebrating his fourth birthday, the third-in-line to the throne melted hearts when he had his first day at ‘big school’ with a reluctant Kate, pregnant with the couple’s first child, forced to stay at home with severe morning sickness.

Getty Images’ Royal photographer Chris Jackson, who is married to Kate’s PA Natasha Archer, was there to see at all and here, he shares his favourite moments with MailOnline.

It was the moment the world had been waiting for, and in November Prince Harry and Meghan Markle finally announced their engagement followed by a photo call at Kensington Palace

‘There had been much anticipation over recent months that we would hear an engagement announcement from Kensington Palace as things seemed to be getting serious for Prince Harry and Meghan Markle, especially after their first official public appearance at the Invictus Games in Toronto.

‘However, on a cold and bleak Monday morning it seemed to catch many by surprise. This surprise turned to excitement pretty quickly though as a group of invited media got the opportunity to photograph and film the happy couple in the sunken garden at Kensington Palace, a poignant and meaningful gesture to introduce Meghan to the world in one of Prince Harry’s mother’s favourite places.’

Queen of the jungle! Queen and the Duke of Edinburgh came face to face with an Asian elephant named Donna during a visit to ZSL Whipsnade Zoo, Dunstable in April

‘Undoubtedly one of the more surprising photographs of 2017. When Queen Elizabeth and Prince Philip met Donna the Asian Elephant at Whipsnade Zoo in April.

‘No one was really expecting the monarch to interact with this giant animal in any way so when we were briefed that the Queen may actually give Donna some lunch the realisation that I may be in for a different kind of shot sunk in!

‘Whilst I loved the moment the Queen actually fed a banana to the curious animal my favourite image was when Donna, trunk at full stretch, tried to cheekily snaffle a banana from the HM as she chuckled to herself with the Duke looking on with a bemused expression!

‘Out of shot are a number of worried looking zookeepers on-hand in case Donna decided to get a little bit too close to the Royal couple!’

Prince Charles at the Dyson Centre in Singapore, November 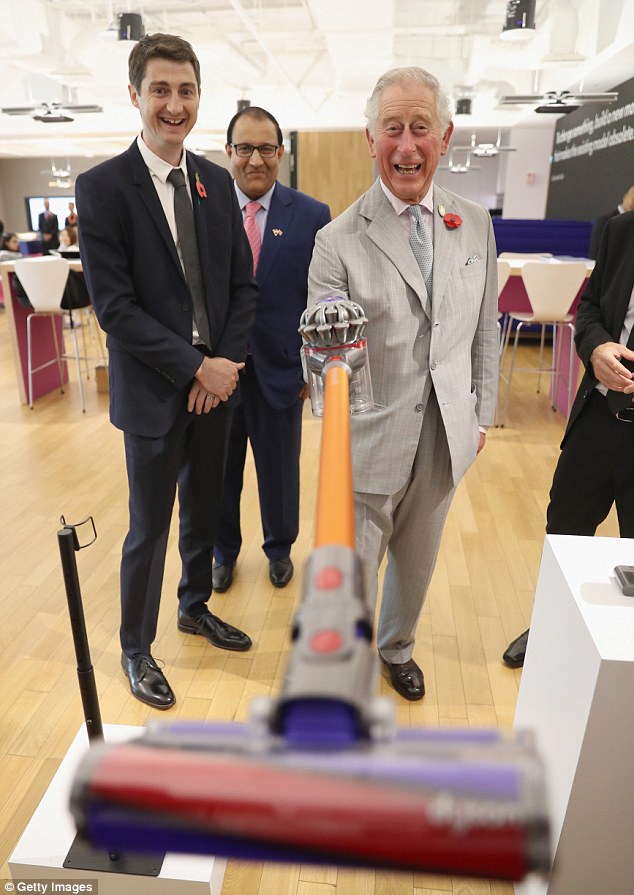 Charles demonstrates a new Dyson V8 Absolute vacuum cleaner on Chris at the Dyson Technology Centre, as part of his tour of Singapore, Malaysia, Brunei and India with Camilla

‘During a visit to the Dyson Innovation Centre in Singapore, as part of an official royal tour by the Prince of Wales and Duchess of Cornwall to the far East, the Prince was being shown some of the company’s most recent products.

‘The Prince was clearly quite taken by the Dyson V8 Absolute vacuum cleaner and thought he might test it out on my trousers! In situations like this you have to be pretty quick off the draw and I was pleased to see I had managed to keep the shot in focus.

‘The Prince always has a great sense of humour in situations like this and it certainly made what could have been quite a mundane visit pictorially into something a little more fun!’

Harry with Barack Obama at the Invictus Games, September

‘They clearly had a lot to catch up on as they watched an energetic game of wheelchair basketball. Invictus Toronto 2017 was a great success and built on the experience and lessons of the last few years.

‘It means so much to the competitors and families and one thing I particularly liked this year was how the event was so integrated into daily Toronto life right in the middle of the City which was buzzing.’ 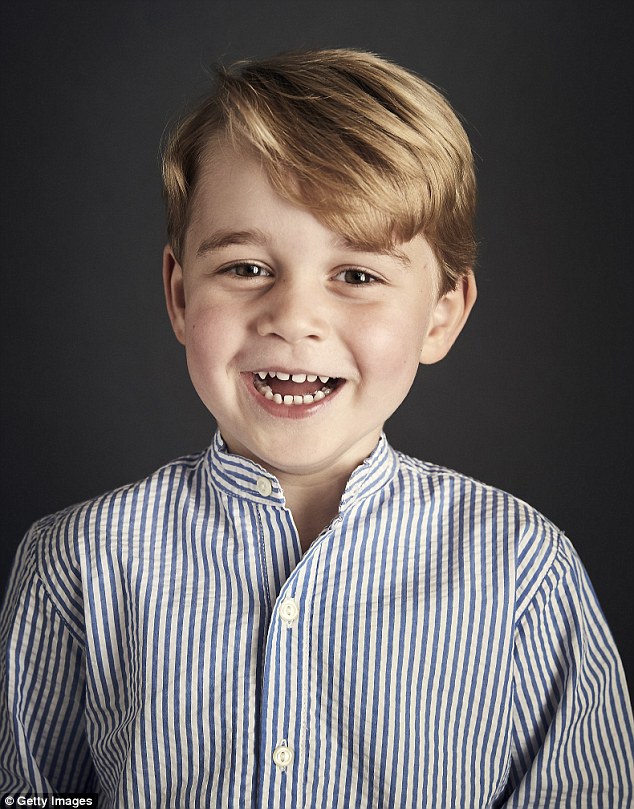 ‘Fun and energetic’: This portrait was taken at Kensington Palace in London at the end of June by Chris to mark Prince George’s fourth birthday

‘One of my standout images of the year. A real honour to get the opportunity to photograph this fun and energetic young boy.

‘The image was released by Kensington Palace to celebrate the young Prince’s 4th birthday.’

Duke and Duchess of Cambridge in Paris, March 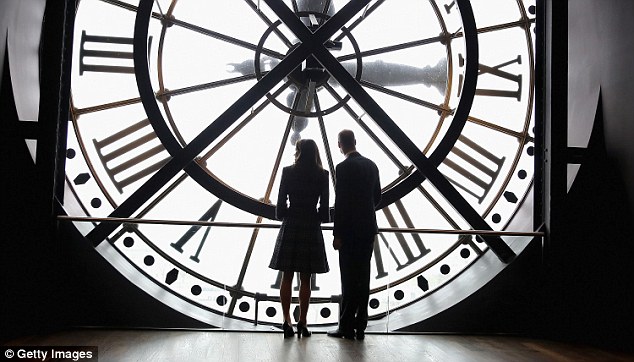 ‘The Musée d’Orsay in Paris is a spectacular converted railway station that now houses some of the world’s most iconic pieces of art.

‘In a world of ‘day to day’ royal pictures, it was a unique moment as I got the opportunity to photograph the royal couple taking in the view though the iconic old railway clocks, looking out over the river Seine.

‘The Duchess glanced to the left slightly and positioning them between the “spokes” of the clock I was very happy with the resulting image – certainly something a little different and rare to see this famous couple on their own in this way.’ 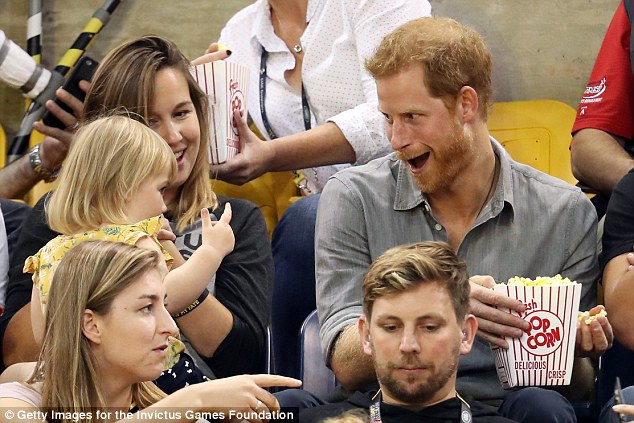 Prince charming! Harry sits with David Henson’s wife Hayley and daughter Emily at the Sitting Volleyball Finals during the Invictus Games in Toronto

‘This is really one of a sequence of pictures which were very amusing. After Prince Harry sat down next to little Emily Henson, the daughter of Dave Henson, one of the British Armed Forces Invictus Games team some serious fun and games began.

‘The faces Prince Harry pulled and little Emily’s fascination with the royal popcorn made for a fantastically entertaining set of photographs, whenever Prince Harry had his head turned Emily had her hand in the tub and will forever be known as the “popcorn burglar”!’

‘One of my favourite photos I’ve taken this year and very special to have been asked to take it. The first day of school is a big moment for both parents and children alike and it was great to see little Prince George with such a big smile on his face as he stood next to his father, the Duke of Cambridge ahead of their first school run together.

‘My favourite story of recent weeks was that Prince George had played the sheep in the school nativity play, I bet he enjoyed it!’ 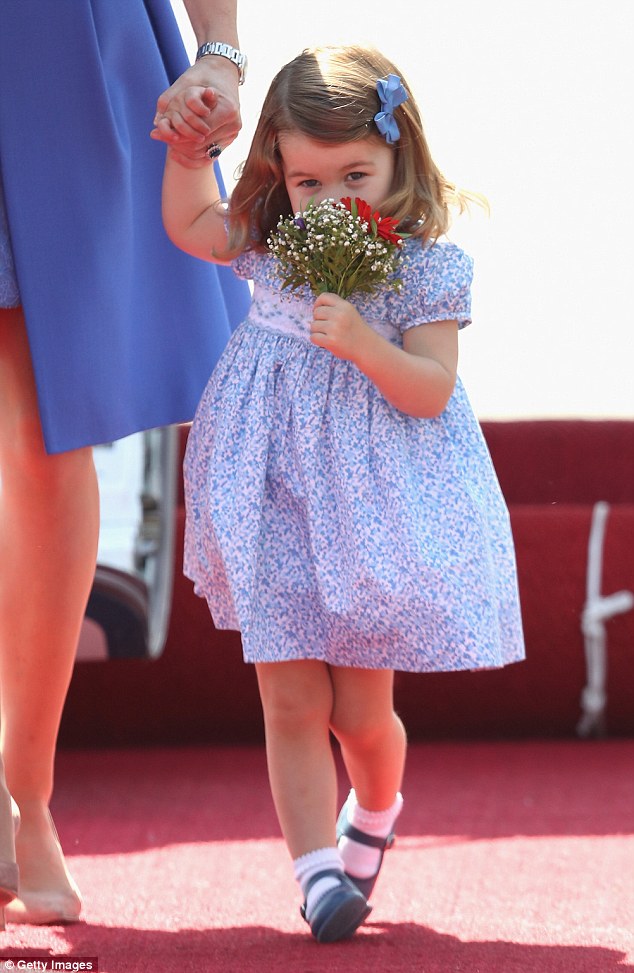 ‘A lifetime of royal duties awaits this young Princess but it was a special and incredibly sweet moment when she was presented with her first bouquet of flowers on arrival into Berlin Tegel Airport.

‘They clearly smelt great as she looked out at the strange view that greeted her! During this official Royal visit by the Cambridge family the young royals were certainly the (occasionally reluctant!) stars of the show.

‘I absolutely love photographing the children as you always come away from these engagements with a feel good factor and normally some exceptionally cute images!’

The Queen visits Draper’s Hall, May 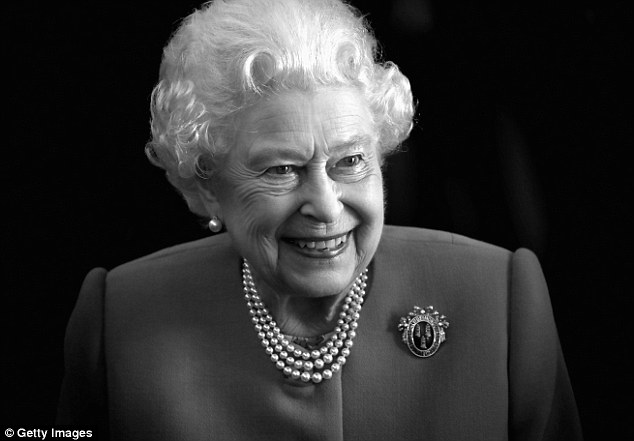 By royal appointment: The Queen visits Drapers’ Hall for a lunch to celebrate the 70th anniversary of her mission to the Freedom of the Company

‘I love photographing the Queen and still get a little excited to this day when I know I will have this opportunity.

‘She certainly has a presence and the anticipation for a photographer to capture a great image if the light falls in the right way and you are rewarded with a nice expression drives you to make the most of even the seemingly routine engagements.

‘This was taking during a visit to Draper’s Hall in the City. As the Queen glanced around to smile at a guest the soft window light gave this resulting image that I was particularly happy with.’

Kate, William and Harry running for Head’s Together, February 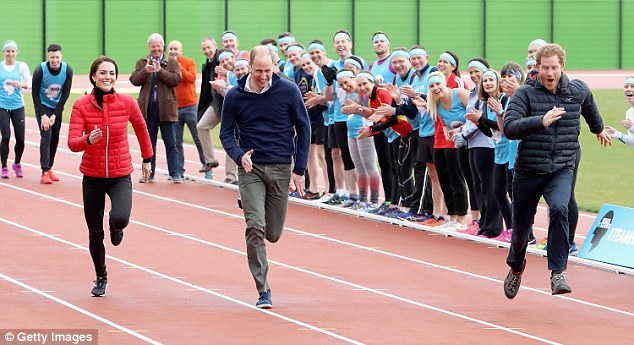 ‘Heads Together has been a standout campaign for the younger royals this year. Their campaign to raise awareness of the stigma about mental health has helped many people raise the confidence to talk about their mental health issues.

‘One highlight of the year was the campaign’s involvement in the London Marathon in which a Head’s Together Team were taking part. During a photo call to introduce the Heads Together marathon team, the Duke and Duchess of Cambridge raced each other down a track at the Olympic Park in east London.

‘Harry sped out ahead but the Duke certainly looked like he was giving it his all! The Duchess breezed through on the inside lane looking elegant as ever!’