Sadiq Khan was criticised again today for refusing to give London bus drivers protective masks despite nine dying from coronavirus, as he launched a two-week trial to test if passengers could use the middle door.

The approach is meant to reduce contact between drivers and their passengers, but critics – including the families of Transport for London workers – insisted a trial would ‘waste time’ and did not go far enough. Passengers will not have to touch in.

Tina Grace tweeted: ‘Not good enough. All TfL staff must have protective masks and gloves, following Germany’s example. Our drivers are dying.’

Another Twitter user wrote: ‘My partner is being forced back out there by you as head of TFL if anything should happen I will hold you personally responsible as apparently they don’t need PPE!!!’

The Mayor of London has faced a barrage of criticism in recent days from transport workers who say they are working in dirty conditions while 90 per cent of the capital’s buses and more than half of Tube services continue to run.

It came as the daily death toll in the UK yesterday surged to nearly 1,000 as government sources indicated the national lockdown is set to extend into May. Prime Minister Boris Johnson remains ‘stable’ in intensive care.

Closing the front door is meant to reduce contact between the driver and their passengers, but critics – including the families of Transport for London workers – insisted a trial would ‘waste time’ and did not go far enough

The trial of middle-door boarding only will begin this week on several routes that operate out of Walworth bus garage in south London, including two that serve hospitals.

TfL say the trial will assess if the measure has a negative impact on passengers and say they have already encouraged people to sit away from the driver and reinforced the plastic barrier protecting the cab.

But one critic today urged Mr Khan not to ‘waste time’ with a two-week trial as others insisted he immediately roll out protective equipment to all staff.

Sean McShane tweeted: ‘Sadiq, please try to imagine back to when your dad was driving the bus and what you would have wanted in place as that my position now with my dad driving the bus at over 60.

‘This should not be a trial – look at what Czech Republic is doing! 1 month could cost unnecessary lives.’

One Twitter user raged:  ‘You just lag behind other cities all the time. This just occurred to you now has it?. You are utterly useless. For heavens sake, step down.’

Another added: ‘Why must workers have to die before we implement some protection? All key workers have and will remain in danger if the firms do not take covid-19 to serious.’

And Lyn Godfrey said: ‘As Mayor you should have known buses were not cleaned and drivers were left unprotected in cabs with people breathing all over them.

‘You hold a huge budget for London and could have commissioned PPE for these poor drivers. Shame on you – you have their blood on your hands.’

Yesterday, Mr Khan insisted that bus drivers did not need to wear personal protective equipment, despite the number of bus, Tube and train workers who have died after testing positive for coronavirus rising 14.

Speaking on Good Morning Britain, he said TfL had sought advice from Public Health England, the Department for Transport and the World Health Organisation on whether drivers should have PPE.

He said: ‘What they’ve told us is that PPE should only be used in care settings.

‘You know the shortage there is of PPE for our NHS and care staff, as recently as yesterday we re-chased the government to get advice on this. Their advice is quite clear transport workers should not be wearing PPE.’

The Mayor’s decision infuriated the Rail, Maritime and Transport (RMT) union, who said transport staff should stop working if they are not provided with adequate safety equipment.

‘That means that if they are not provided with PPE, including masks, eye defenders and gloves where necessary, they should not be working,’ said General Secretary Mick Cash. 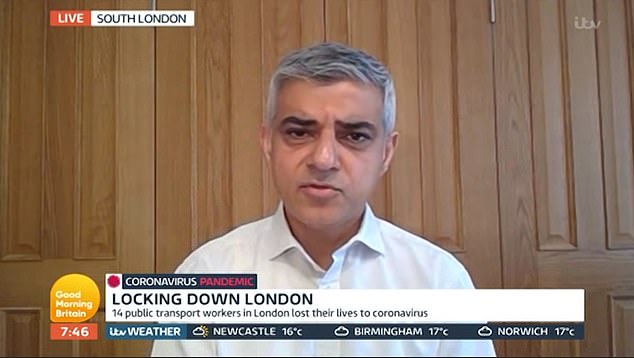 The Mayor on Good Morning Britain yesterday, when he confirmed drivers would not be given masks 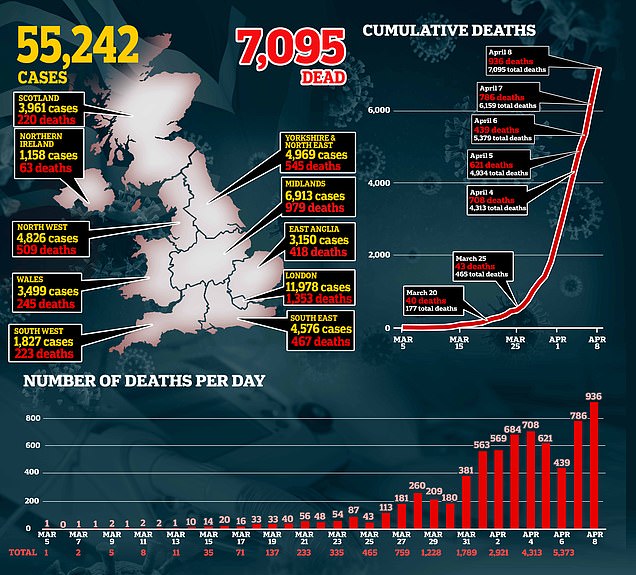 Mr Khan has also faced criticism in recent weeks as key workers forced to continue taking the Tube were forced into busy carriages after a large number of services were cut.

The number of passengers using the Tube has plunged during the lockdown, with 94% fewer on some days last week compared with the time last year. This has meant most trains are largely empty.

However, because the number of services has been dramatically reduced, key workers who still need to travel have been forced to pack into a smaller number of carriages at some busy points in the day.

In response, Mr Khan has insisted he is unable to run any more services because a third of TfL staff are off sick or in coronavirus self-isolation.

Claire Mann, Director of Bus Operations at TfL, said: ‘London’s hard-working transport workers are making a heroic effort at the frontline of the fight against this pandemic, and it is only right we consider everything we can to protect them.

‘We’ve already delivered many other enhanced safety measures and by trialling middle-door only boarding on buses we can gain the information we need to see if we can further improve safety on London’s buses.

‘Most Londoners can do their bit to protect our bus colleagues and other critical workers by remembering: stay home, don’t travel, save lives.’

‘He didn’t take risks – he was doing the job he loved’: Family of one of the London bus drivers to die from coronavirus voices fears about lack of protective equipment

The grieving mother of a London bus driver who died alone of Covid-19 said her son had taken no risks but was simply ‘doing the job he loved’ to help people get to work.

Emeka Nyack, 36, who drove the number four bus from Blackfriars to Archway succumbed to the disease at the end of March after fighting it for two weeks.

His mother Anne said Mr Nyack, a father-of-one, had stayed at home as much as possible to try to avoid coronavirus, but was worried about the lack of protection he was given while driving. 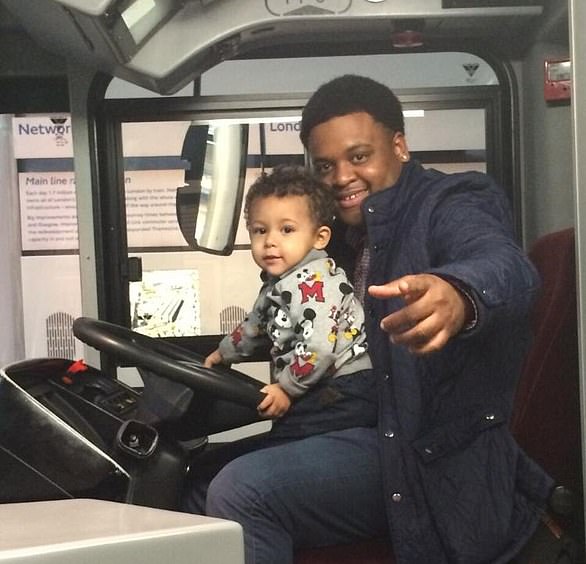 Emeka Nyack, 36, sits in the cab of a bus with his son, Makiah, who is now seven years old

In an interview with MailOnline, she said: ‘My son didn’t go out anywhere that was risky. He just went from home to work and back again. It was a mundane routine but he loved it, and did it in a professional way.

‘He didn’t choose to be out there risking his life like some idiots who ignore the warnings. He was doing the job he loved to help the country get through this.’

She said the family had been desperate to stay with him in his last moments, but were not allowed.

‘He died on his own, with nobody to hold his hand,’ she said. ‘When he collapsed the paramedics threw us out of the room, we weren’t even able to say goodbye. My son’s not going to have parents’ evening any more. It’s just so sad.’

Before his death, Mr Nyack – who suffered from mild asthma – had told colleagues that he was worried about the poor hygiene on the buses and the lack of protection for staff.

Drivers were sent to work with no masks or gloves and the vehicles were not cleaned properly, he claimed. 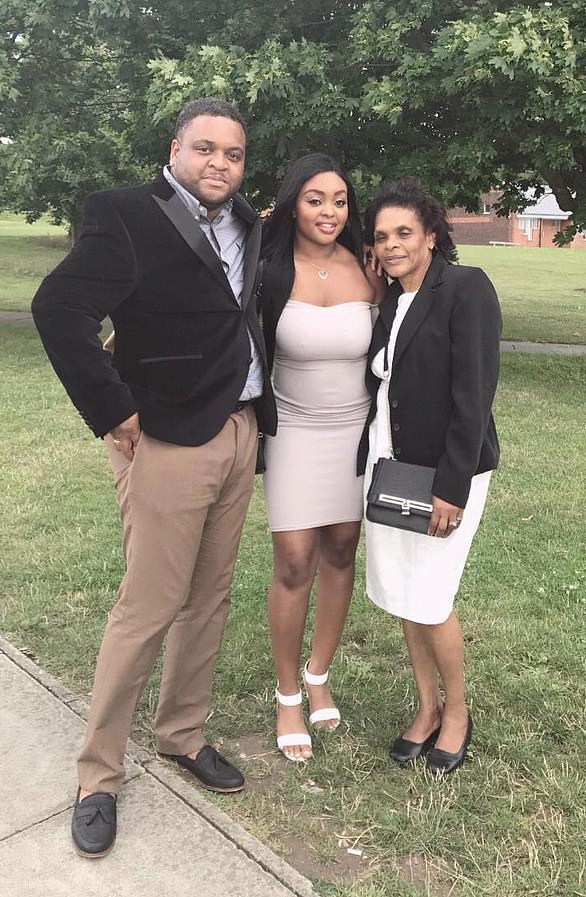 Mrs Nyack, 62, said she wrote to her son’s employers, Metroline, last month, warning them of the danger and begging them to address these concerns. But although she received a supportive reply, no action was taken.

And she claimed London Mayor Sadiq Khan should have done more to offer protective equipment to drivers – and had not even been in touch to offer his condolences.

‘Sadiq Khan should have protected my son. I hold him responsible for what happened,’ she said. ‘I want to state that quite clearly, in bold letters.

‘It’s just devastating that these drivers work so hard serving the public, taking NHS staff to work, and they are sent to risk their lives in dirty buses with no protection.’