Sarah Hyland and Wells Adams are planning their wedding – for the third time.

The Modern Family actress and the 37-year-old reality star have been attempting to plan their wedding since they got engaged in 2019, but have had their plans canceled and pushed back twice due to the COVID-19 pandemic.

After almost two years of waiting, wedding plans are in the works for the third time, with hopes they will not have to cancel their nuptials again.

Here’s hoping: Sarah Hyland and Wells Adams have asked their fans to ‘pray for us’ as they attempt to plan their wedding for a third time following multiple delays; they are seen at the 2019 E! People’s Choice Awards

Wells told Us Weekly: ‘Wedding update – nothing. We’ve had this thing postponed twice and honestly, I don’t know if I can take a third one. So just pray for us, please.’

Her beau also shot down any suggestions about tying the knot with his wife on television, as he did not want any potentially embarrassing anecdotes to be recalled on a public scale.

‘No way because my brother’s best man speech would probably make air and I don’t know if I’m ready for that,’ he said.

The 30-year-old beauty and the Bachelor in Paradise star started dating in 2017 and got engaged two years later, before planning to marry on August 20 last year. 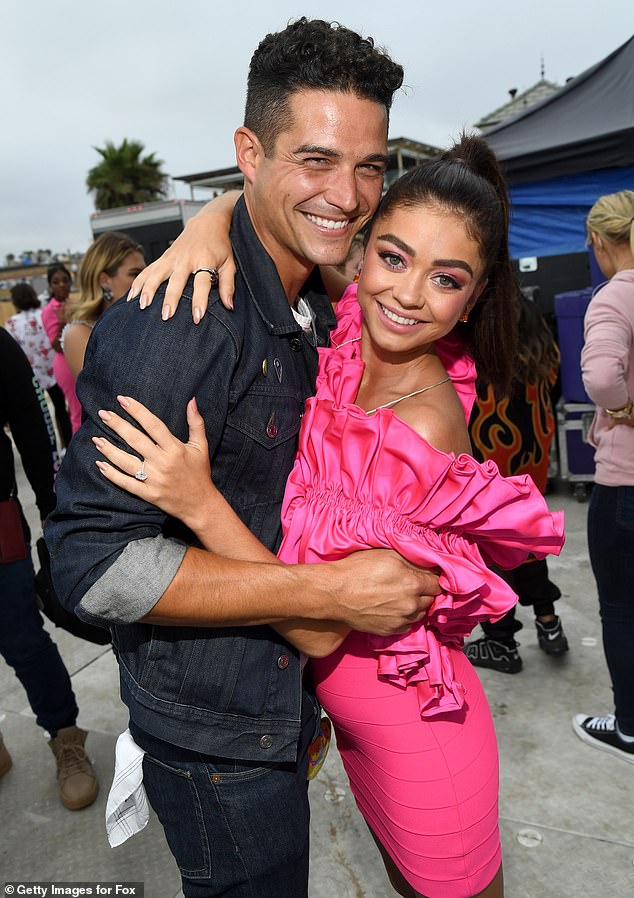 Stressful event: During an interview with Us Weekly, Hyland wrote that she has experienced two delays with her wedding and that she does not ‘know if I can take a third one’; she is seen with Adams at the FOX Teen Choice Awards 2019 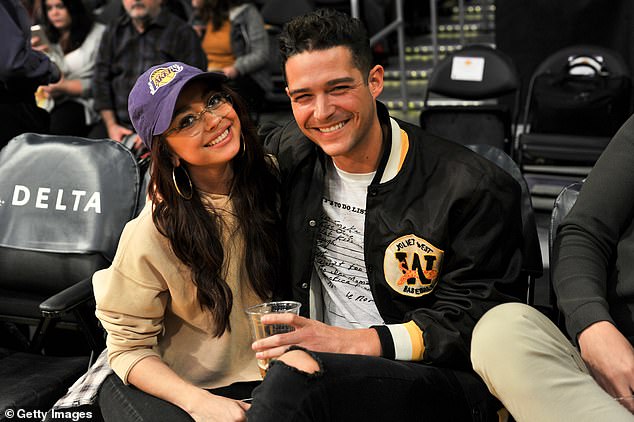 Staying together: The couple began dating in 2017 and they went public with their romance that Halloween; they are seen in the first year of their relationship

Prior to becoming involved with her current fiance, Hyland dated her Geek Charming co-star Matt Prokop for four years.

In 2014, the performer obtained a restraining order against her former boyfriend due to allegations of verbal and physical abuse, and the injunction was later made permanent.

She went on to start a relationship with her Vampire Academy castmate, Dominic Sherwood, in 2015, although they split up two years later.

The actress began dating Adams in 2017, and the two initially attempted to keep their romance under wraps until they went public that Halloween and they went on to become engaged in July of 2019. 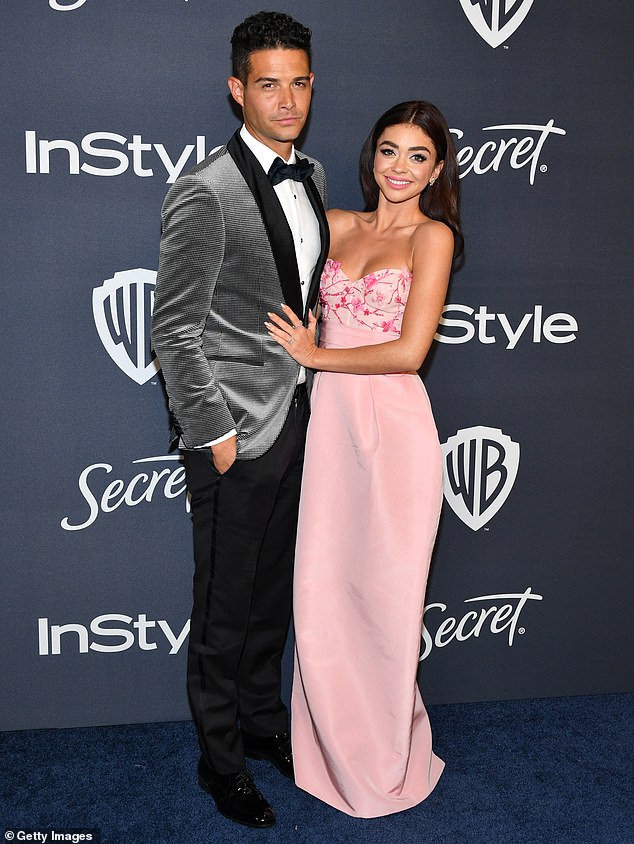 Dating around: Prior to becoming involved with Adams, Hyland was connected to her former costars Matt Prokop and Dominic Sherwood; she is seen with her fiance in 2020

When their plans were canceled, they chose to mark the occasion anyway with an all-white photo shoot that captured what would have been their special day.

Hyland said at the time: ‘It was my first time out of my house in quarantine, and we went to a winery and we went with all of our friends — all of us got tested — our family, our best man, maid of honor.’

She then went on to describe how the occasion was meant as more as a group activity as opposed to a serious photoshoot and wrote that she thoroughly enjoyed the event.

She recalled: ‘I brought a white dress and a veil I got on Etsy and my bridesmaids got a real wedding bouquet and surprised me and we took fake wedding pictures for fun!’ 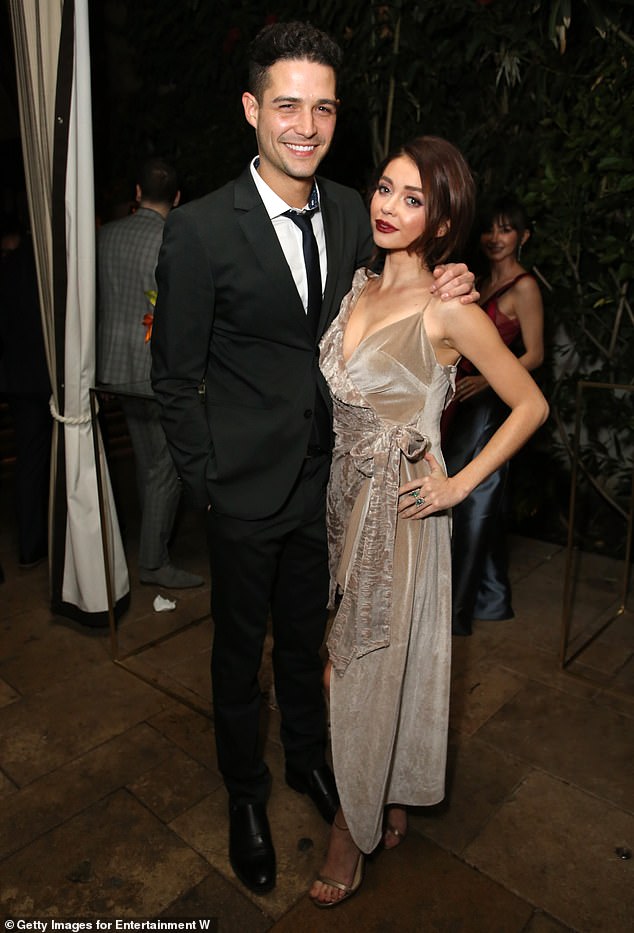 Making the most of it: When the couple’s wedding plans were cancelled for the first time, they held a photoshoot to commemorate what would have been their special day; they are seen in 2018

Posting on social media while marking her fiance’s birthday, she wrote a lengthy message to express her devotion to her significant other.

Hyland began with: ‘It’s the love of my life’s birthday!!!! Thank you for always dancing silly, singing loudly, laughing contagiously, and loving endlessly. I miss you more than words can say and, if it’s possible, I love you even more than that.’

She bemoaned the fact that she was not with the reality television personality on his special day and asked her fans to perform a dance in honor of her beau.

She wrote: ‘Since we can’t be together, I’d like for everyone to do a classic @wellsadams shimmy in celebration of you! To Pluto and Back Sugar Balls. Can’t wait to finally marry you one day.’ 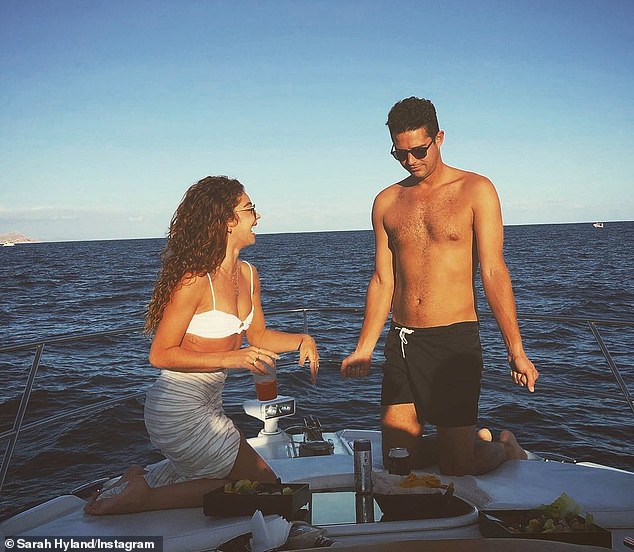 Making it known: Earlier this year, Hyland shared a duo of images with her beau to her Instagram account and wrote that Adams was the ‘love of my life’ in the post’s caption