There were three very good things about Manchester City’s late comeback here. The quality of the two goals, obviously – particularly the free-kick equaliser by Leroy Sane.

The result, because it meant the better team won. Yet the best news of all was that with City getting what they deserved it negated the need for several days of inquest over the worth and process of VAR.

This was coming, have no doubt of it. Referee Carlos Del Cerro Grande wanted to have a look at the handball call against Nicolas Otamendi that led to Schalke’s equaliser in the 33rd minute, but his pitchside monitor was on the fritz. 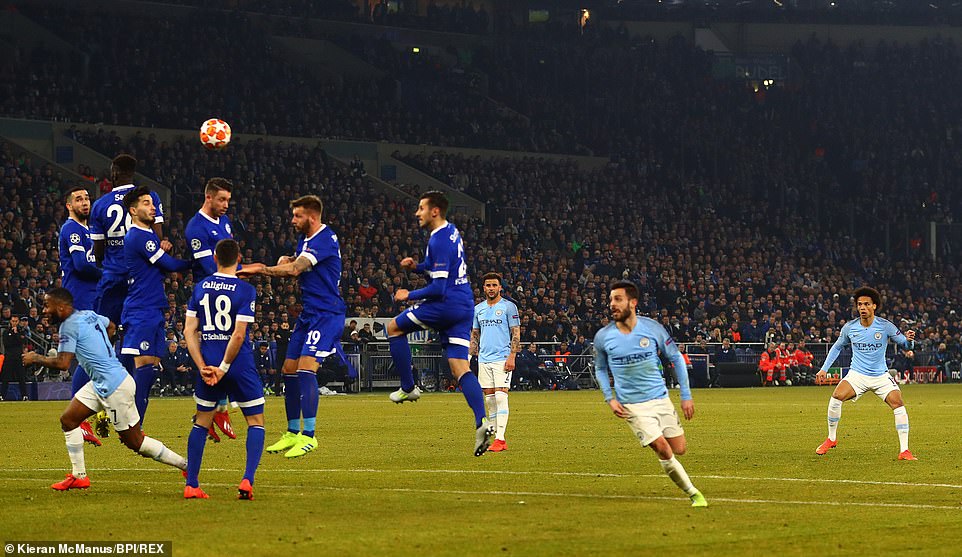 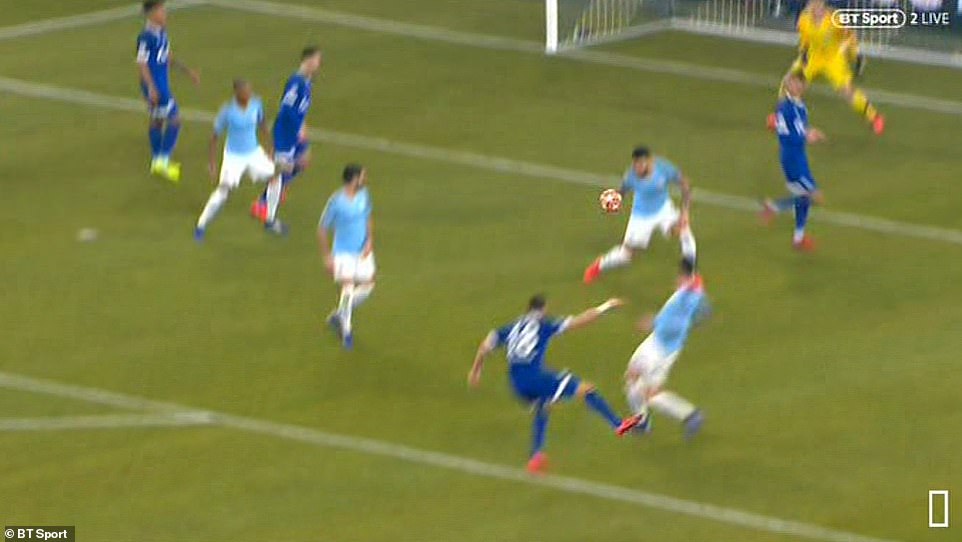 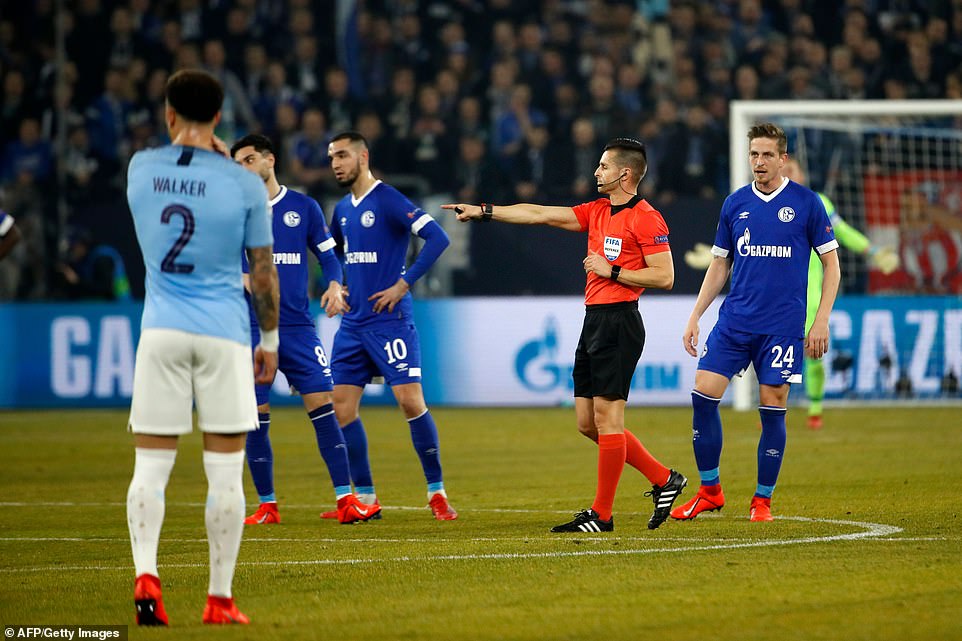 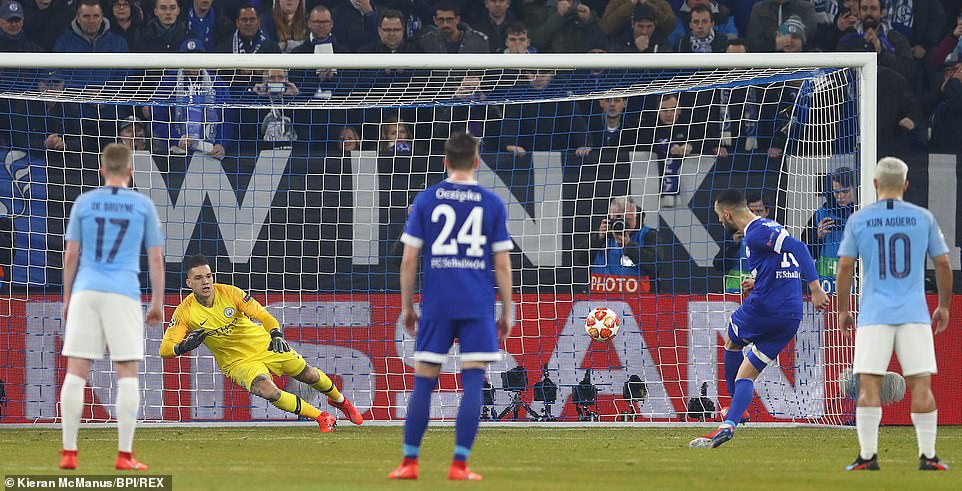 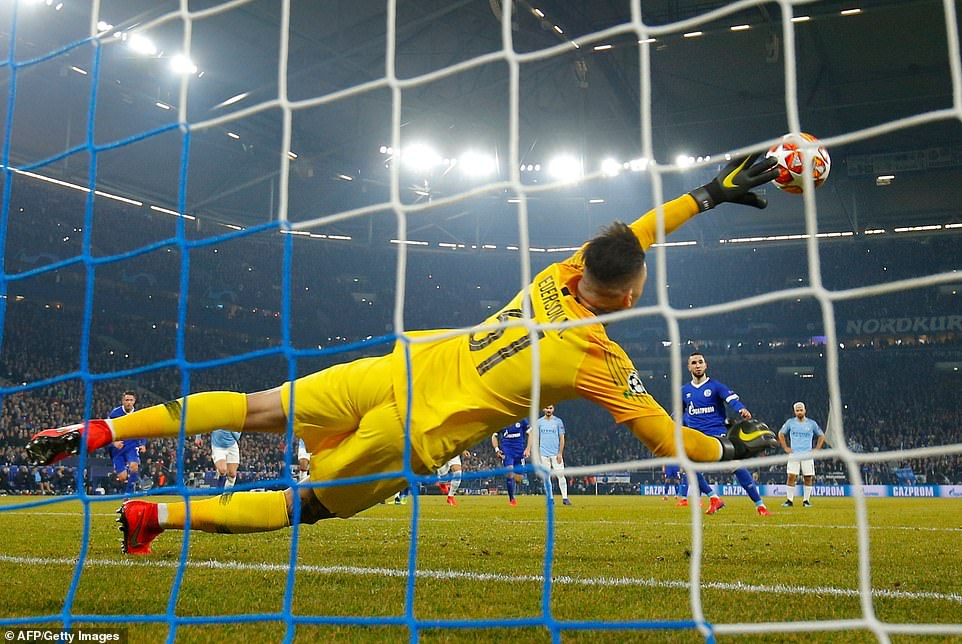 The City goalkeeper came closer to stopping the second penalty, getting a strong right hand on it but couldn’t keep it out 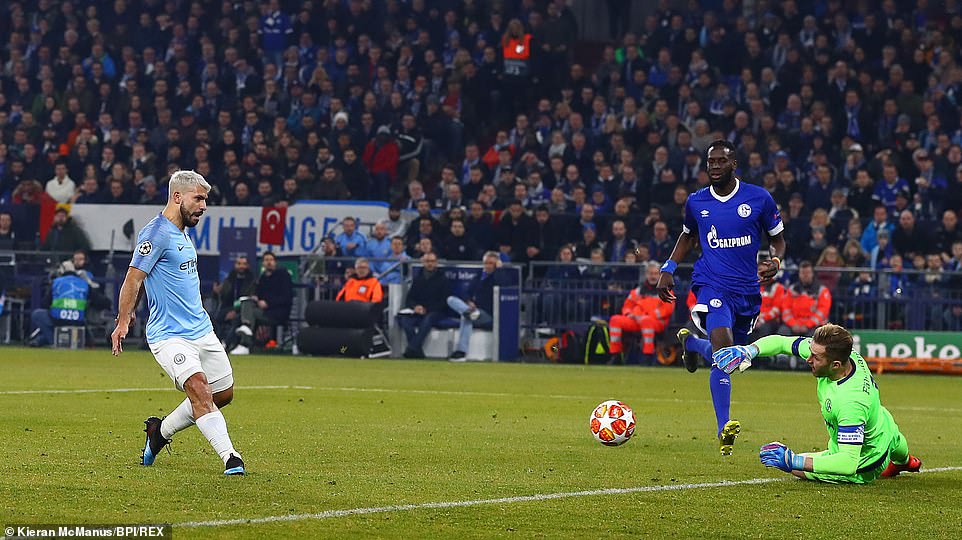 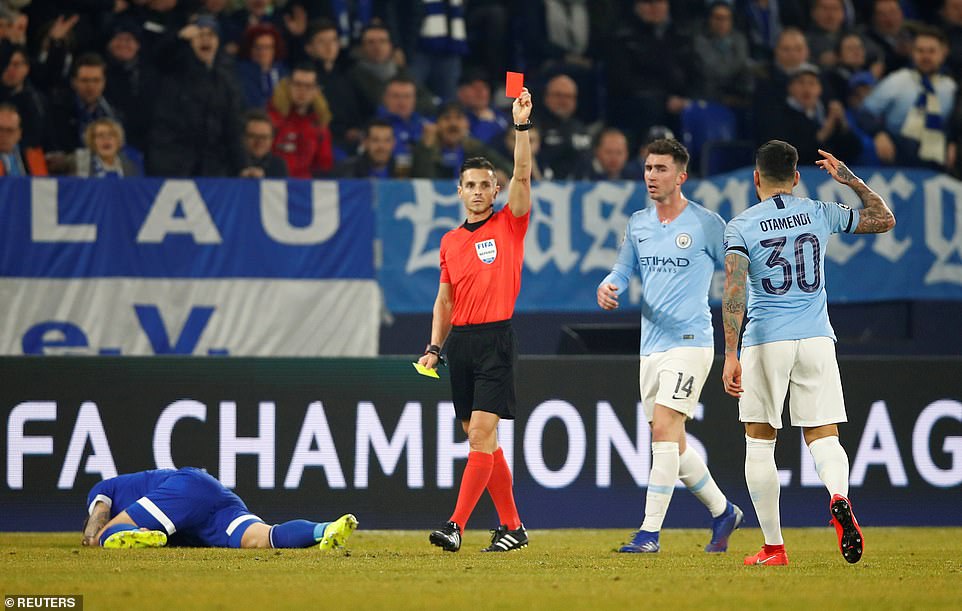 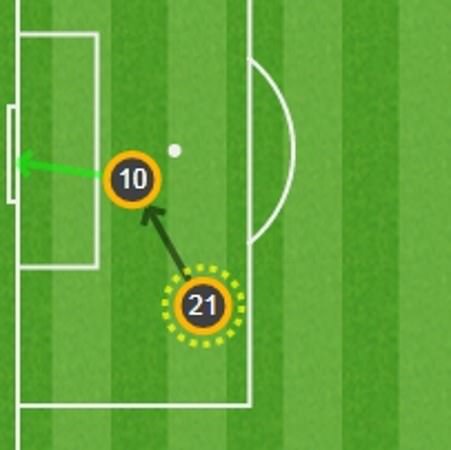 Sergio Aguero had put Manchester City into the lead after David Silva won the ball high and squared for him to tap in. CLICK HERE to see more from Sportsmail’s brilliant MATCH ZONE feature.

There is a dirty great four-sided video screen that hangs from the centre of the Arena AufSchalke and he could definitely have seen that – but to reshow it would mean letting the paying customers in on the secret, too, and there is no way UEFA would allow that.

So Del Cerro Grande’s decision was handed down to him remotely. Was it a penalty? Maybe. Maybe not. Like much of what VAR is required to rule upon, it was a judgement call, pure and simple. Seen them given. Seen them not. Want to talk about some great football first?

Want to talk about Leroy Sane? There were 78 minutes gone when he was finally introduced, 85 when he gave Manchester City the parity they deserved. Why he had to wait that long, heaven knows. City had been trailing 2-1 since shortly before half-time, and went down to ten men in the 68th minute after Nicolas Otamendi was sent off for his second bookable offence, a foul on Guido Burgstaller and a stupidly extreme reaction to the decision, which probably sealed it.

Sane is one of Schalke’s favourite sons. He started here, made his name here as a young sensation in German football; and because he did not leave them for a bigger Bundesliga club, they still love him around these parts. So when he was introduced, late, with City inexplicably trailing there was none of the animosity traditionally reserved for deserters. Even his equaliser was greeted, not with anger, but mild resignation. Schalke knew they were a tad fortunate to be leading. Sane had only given City the minimum they merited. And it was some goal, too.

Maybe they wouldn’t have been quite so philosophical had they known what was to befall them in the final minute of the game, but there you go. City were the best team, and their fightback showed resilience. They worked extremely hard for this win which should ensure progress barring unforeseen calamity. But back to Sane. What a goal to get City back in this game. 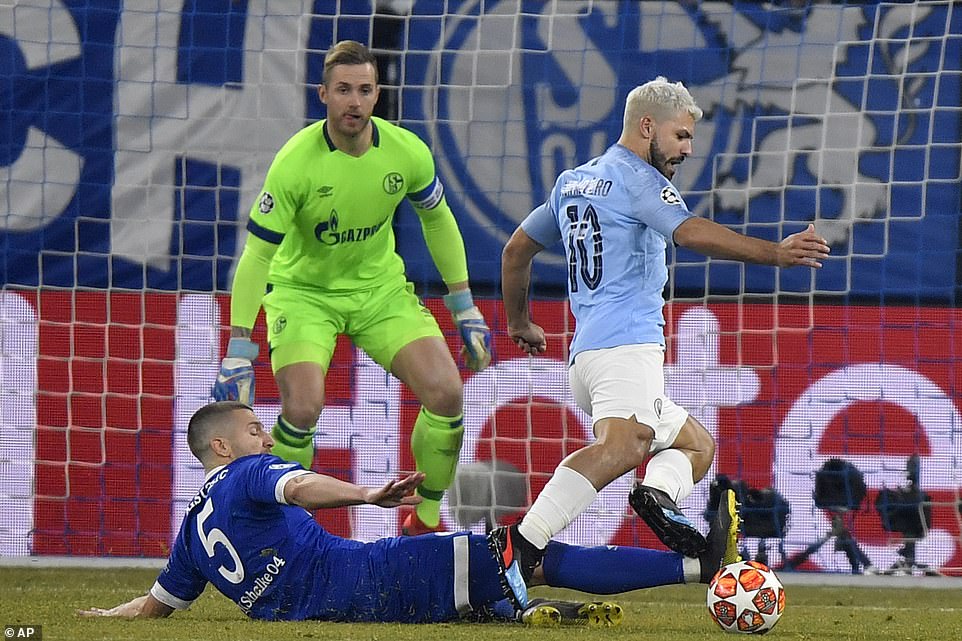 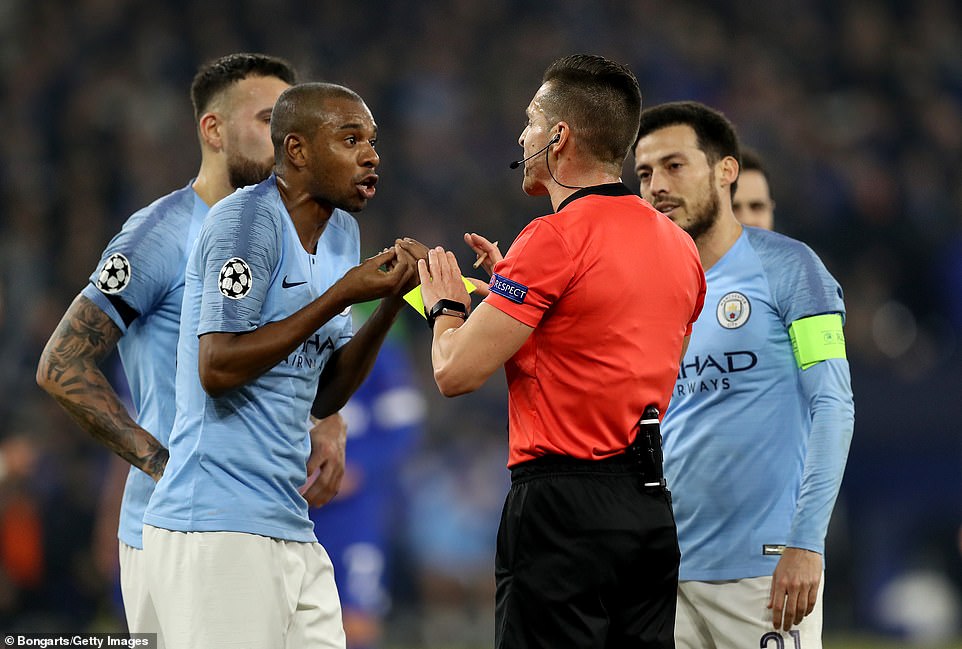 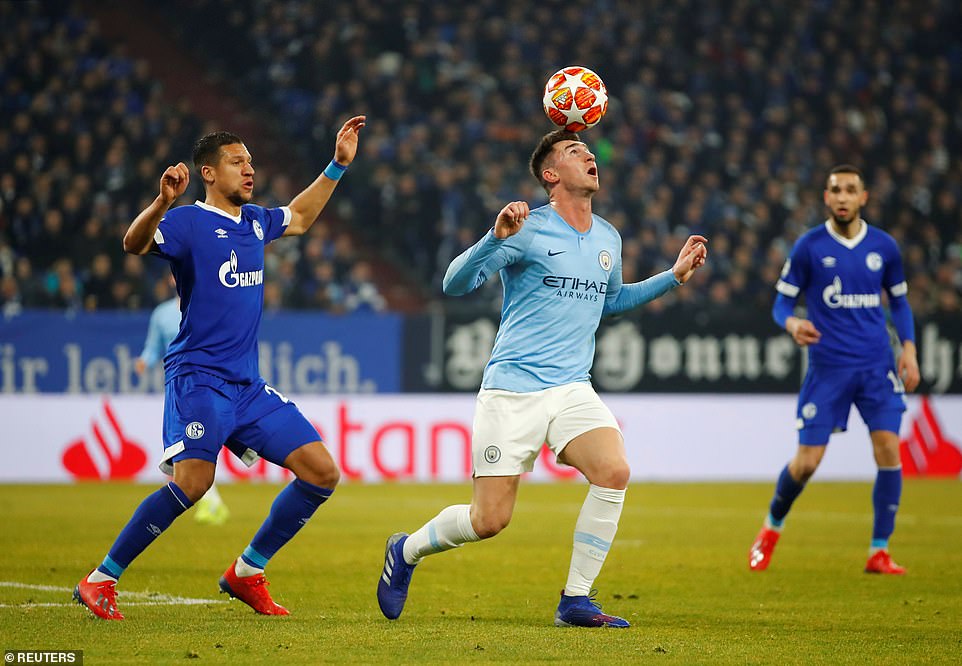 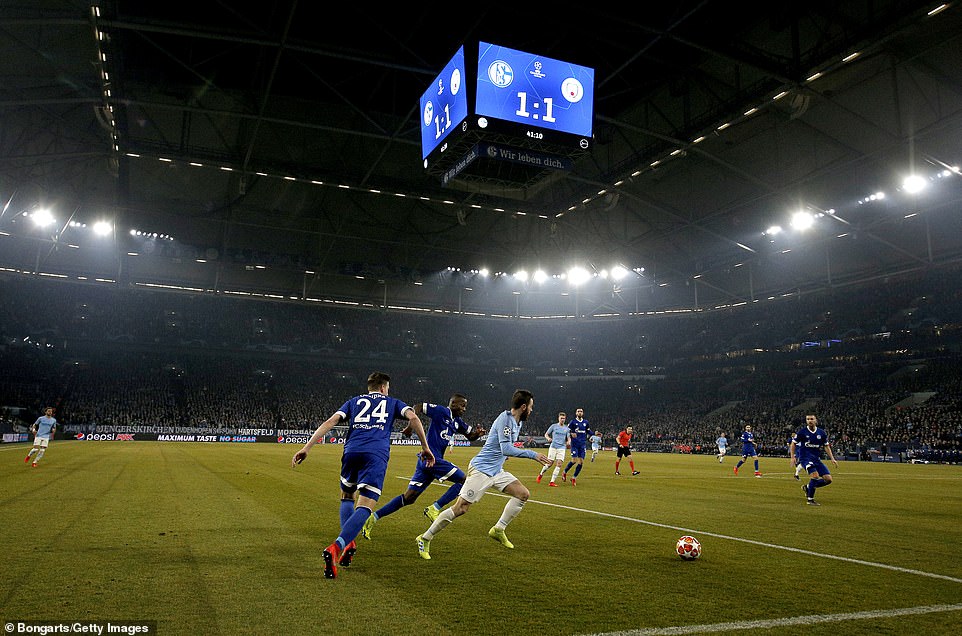 Daniel Caligiuri brought down Raheem Sterling, and Sane stood over a free-kick 25 yards out. He took it in the old-fashioned style but with incredible panache. A full throttle run up, a huge left foot strike and the ball up and over the wall, in with the merest flick off the inside of the post, goalkeeper Ralf Fahrmann powerless to prevent it. He raised one arm, a tiny acknowledgement of a job quite magnificently done. It was respectful, but such a goal deserved more. 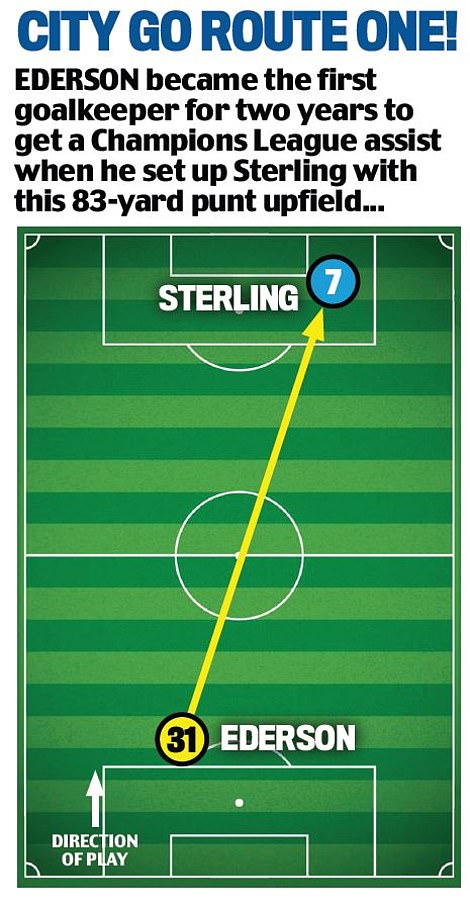 The winner was less spectacular but just as impressively effective. A long punt from goalkeeper Ederson – Manchester City’s secret weapon delivering the sort of football once thought unimaginable from a Pep Guardiola side – set Sterling shoulder to shoulder with defender Bastian Oczipa. He’s slight, Sterling, but tough. Oczipa fell and wanted a foul, rightly didn’t get it, and left the England man to finish smartly. What a comeback just when it looked as if Guardiola was about to lose his first tie to a German side.

How did City almost lose this? A combination of rashness on the part of Fernandinho and the vagaries of VAR. Schalke, having looked entirely without ambition, benefited from two penalties and not only big calls and goals went against Manchester City. They also lost two key players – Fernandinho and Otamendi, banned even before his second yellow – for the return. It started so well, too. Schalke were playing one up, at best, and allowing City possession by dropping deeper and deeper. We’ve seen this film before and know how it ends.

When Manchester United came here in 2011 for a Champions League semi-final, they were up against the rising star of German football in goalkeeper Manuel Neuer – a game-changing player even now, as Liverpool discovered on Tuesday. It is fair to say Fahrmann is no Neuer, certainly not with the ball at his feet.

With 19 minutes gone he was caught in two minds by foolishness on the part of his team-mates at the opposite end of the field. Aymeric Laporte went up for a challenge with Schalke’s Mark Uth; which he won. Schalke wanted a foul, which it wasn’t; Uth stayed down injured, which he wasn’t. The ball then reached Fahrmann, he seemed undecided whether to kick for touch and allow Uth treatment; which he didn’t need.

Instead, he hit a short pass to defender Salif Sane who received it with the relish he might stolen goods. David Silva nipped in, nicked the ball and squared it to Sergio Aguero, who only had to roll it into an empty net. He’s quite capable of scoring the hard ones: he doesn’t need gifts. 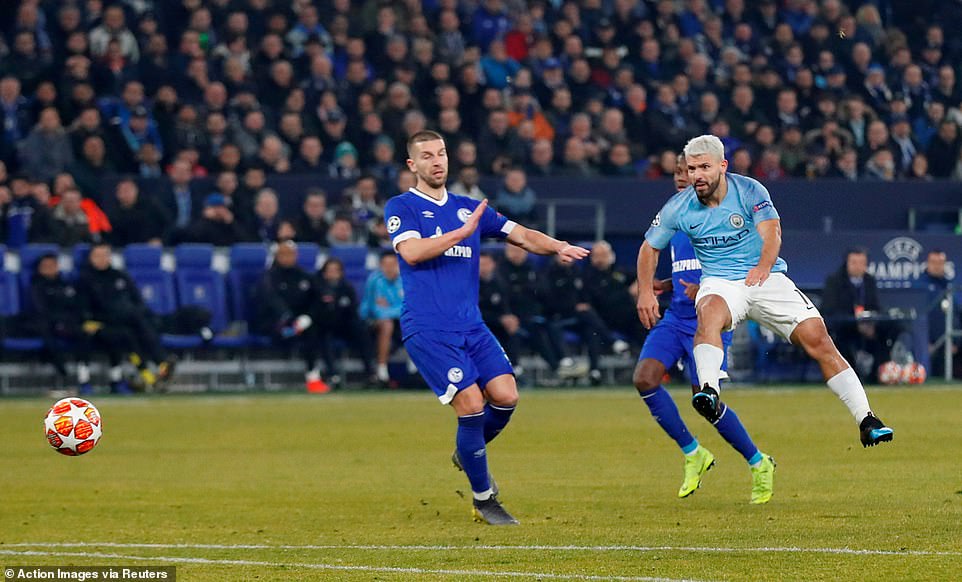 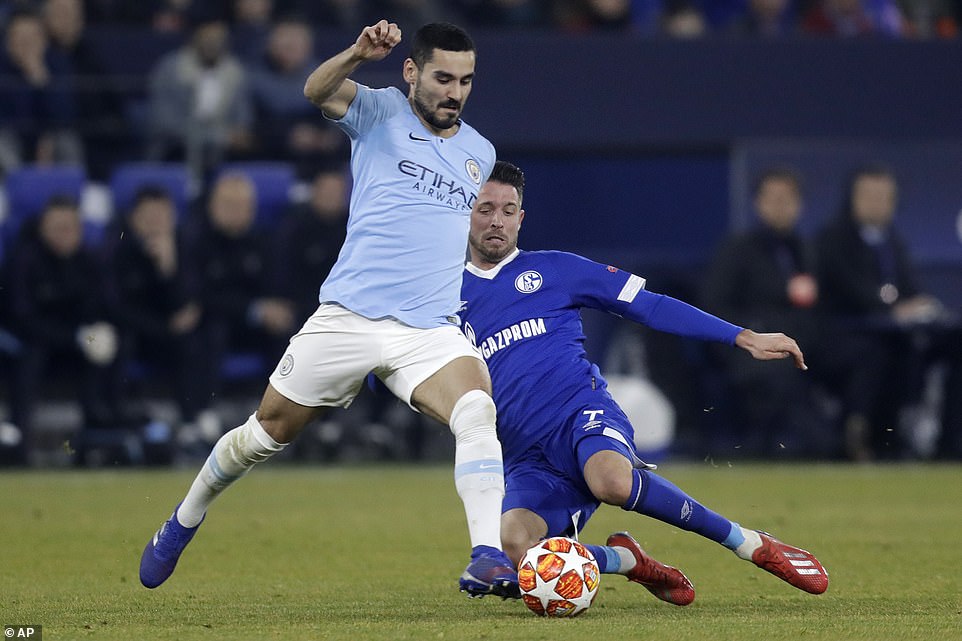 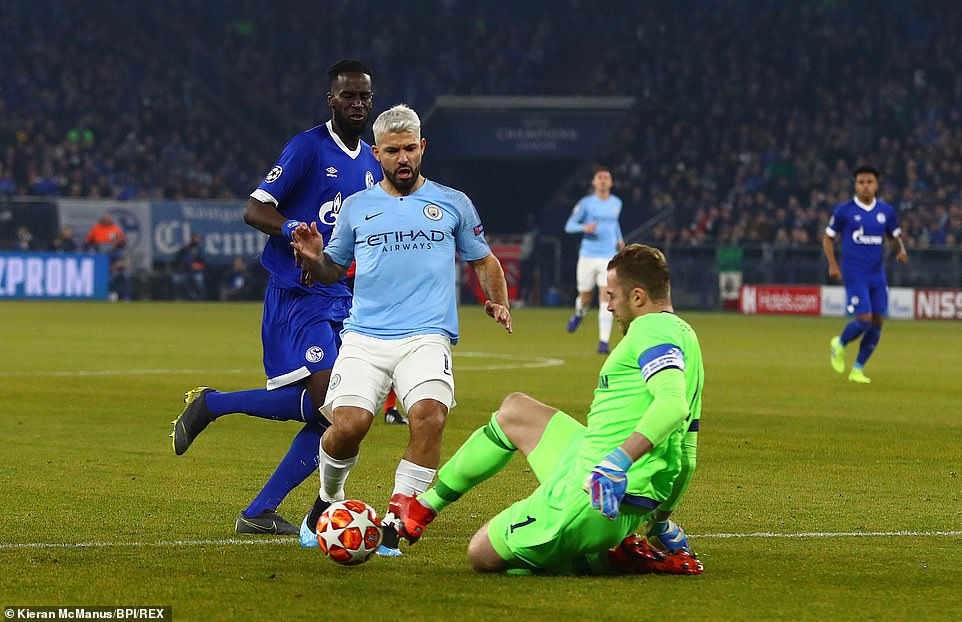 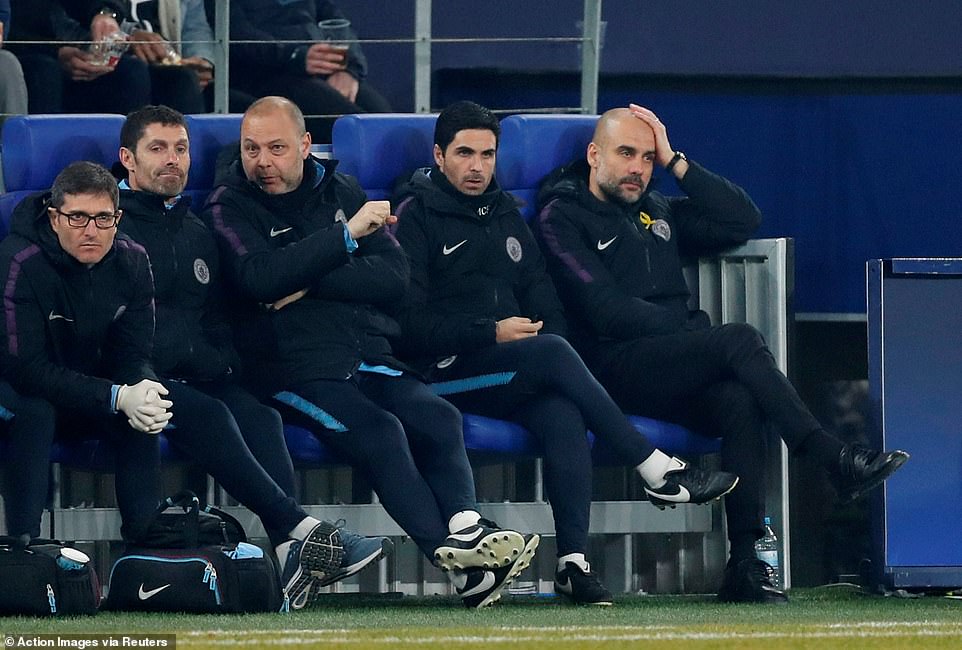 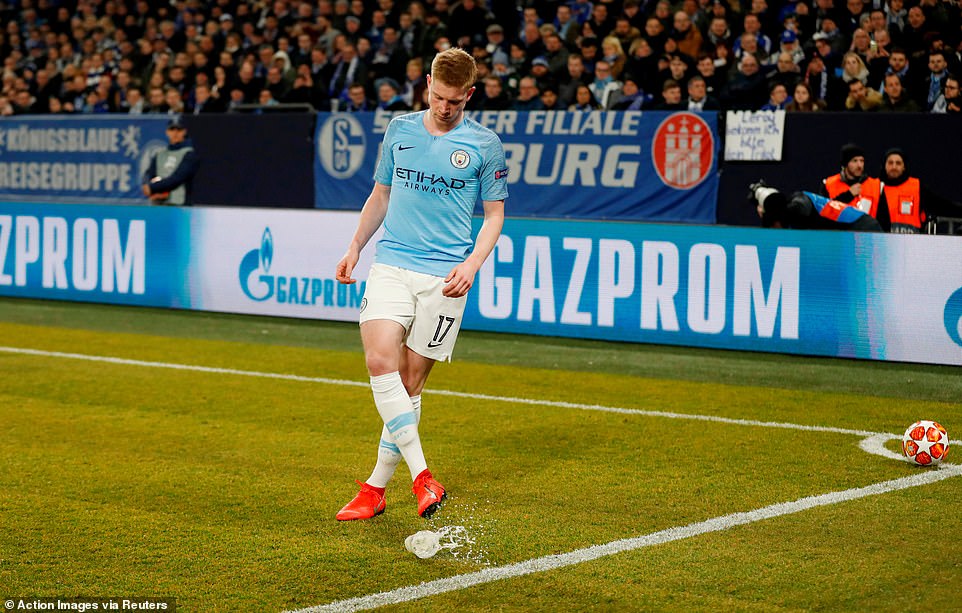 And so to the controversy that brought Schalke back into the game. Perhaps it was a penalty, but it was certainly a mess. Caligiuri’s shot looked goalbound until it struck Otamendi. Immediately, Schalke players surrounded Del Cerro Grande, screaming for a penalty. This seemed to do the trick as he called for a VAR ruling. Well, at least we presume he did.

UEFA said fans would be kept fully informed of developments without being shown an actual replay of the incident. That didn’t happen. We know VAR was in effect because the players mooned around or followed the official like a gang of unsubtle pickpockets, while he walked around with his finger in one ear, as if he was appearing on a particularly hammy episode of Star Trek.

Then, with nobody any the wiser, he called both captains together – and Fahrmann does the job for Schalke, meaning he was summoned from 70 yards away – to order them to tell their players to stop crowding him. Why would they, when exactly that strategy had proved so successful in getting VAR involved in the first place?

Finally, he was given his decision. Penalty to Schalke, booking for Otamendi. He looked to be trying to get his arm out of the way but failed. Finally, when Nabil Bentaleb – late of Tottenham – was standing over the ball UEFA felt confident enough to inform their patrons a penalty had been awarded via VAR. Thanks for that. Bentaleb went right, City goalkeeper Ederson left. Somehow, Schalke were level. The whole process had taken more than four minutes.

Seven minutes later – or 11 in old money, take your pick – Schalke were ahead. Another rare as hen’s teeth expedition into the City penalty area produced unnecessary action from Fernandinho, who defended a free-kick by grappling with Salif Sane. This time Del Cerro Grande spotted the offence without assistance. Bentaleb scored again. This time he went left, as did Ederson, but the connection was too good – high and well-placed. City must have wondered what had hit them. European football circa 2019, it would seem. 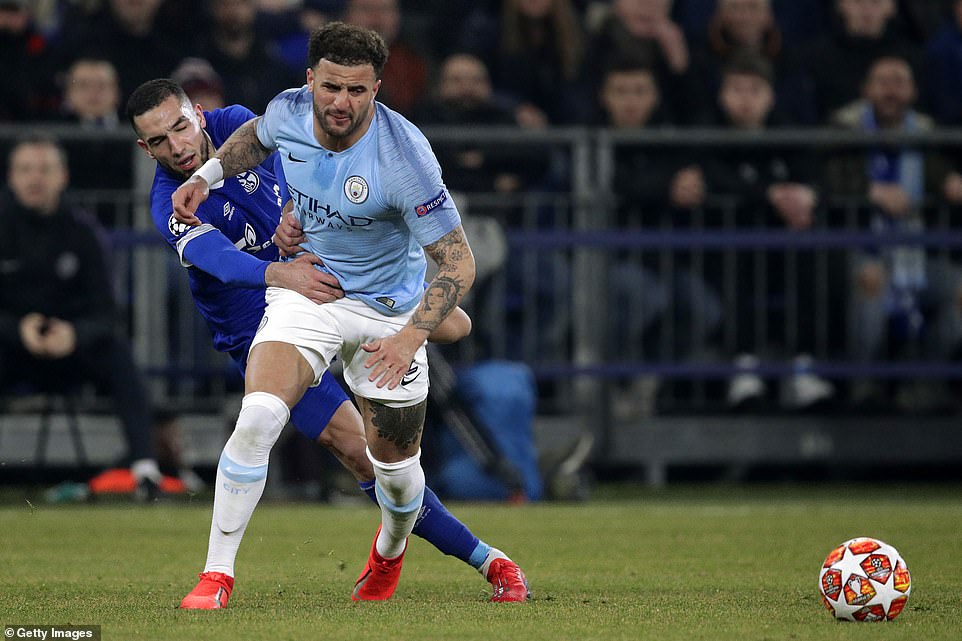 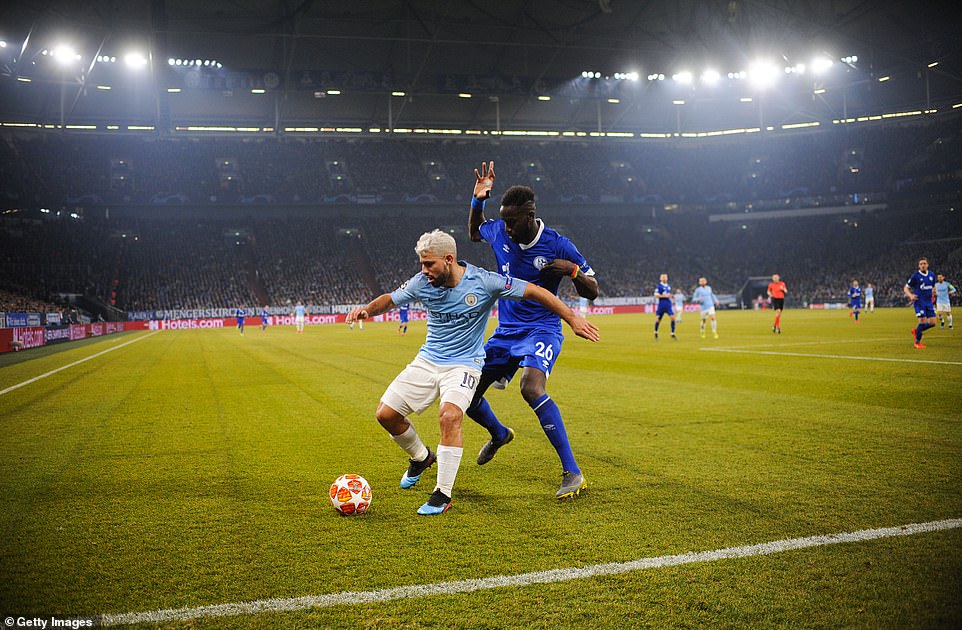 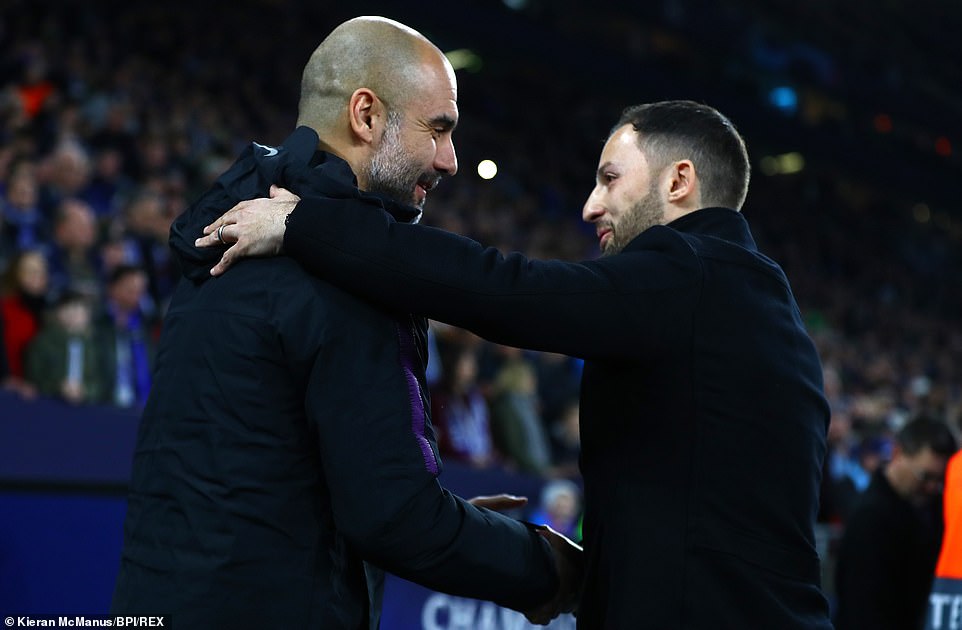