If you don’t know the correct style of running that will stop you being struck down by agonising strains, you’re not alone.

But now scientists have answered the desperate calls of millions of joggers – by telling them exactly how they should run.

In an attempt to crackdown on injuries, researchers have released two sets of side-by-side pictures that show the correct running style.

In both of the pictures, there is one runner with the perfect technique – and one who is at risk of agonising knock because of their style.

Which one is right? In an attempt to crackdown on injuries, researchers have released two sets of pictures that show the correct running style

In order to reveal the ideal technique, they then compared their styles to that of 36 runners who had never suffered a common injury.

The scientists, led by Dr Chris Bramah, found a host of ‘common biomechanical patterns’ among those who had been injured.

These included an outstretched leg, high foot angle at initial contact and a greater forward lean.

But the pattern most strongly linked to a injury was side-to-side pelvis drop, when one hip is higher than the other at each step. 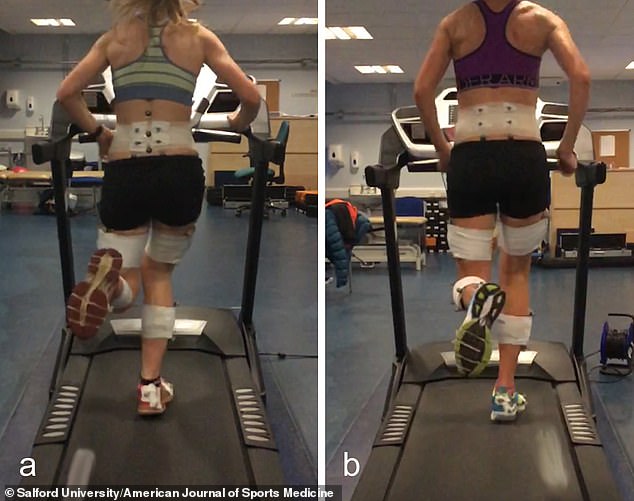 In both of the pictures, there is one runner with the perfect technique – and one who is at risk of agonising knock because of their style

Dr Bramah and colleagues found for every 1° increase in pelvic drop, there was an 80 per cent increased chance of an injury.

He said: ‘These running injuries are some of the most common experienced by runners and can lead to considerable time off the roads.

‘What we wanted to do with the study is identify whether there were aspects of running technique that may be contributing to these injuries.

‘If so, we can hopefully use this information to help runners recover from injury and prevent future injuries happening.’

Dr Bramah added: ‘What we think may be happening, is that these postures are increasing stress through the entire body.’

‘It is simply the weakest link in the chain that becomes injured first, for example, the knee, the Achilles.’

Dr Bramah and his team’s findings about running injuries were published in the American Journal of Sports Medicine.

Figures estimate there are around two million recreational runners in Britain, of which half get injured each year.

The researchers are now exploring possible solutions such as whether increasing step rate, cadence, can offset risks of injury.

Dr Bramah said: ‘What we are finding is that simple changes are having a big effect for the runners we see.

‘Not only have we been able to help runners recover from injury, but we have also seen some people go on to run PBs.’

SO, WHAT IS THE RIGHT ANSWER? 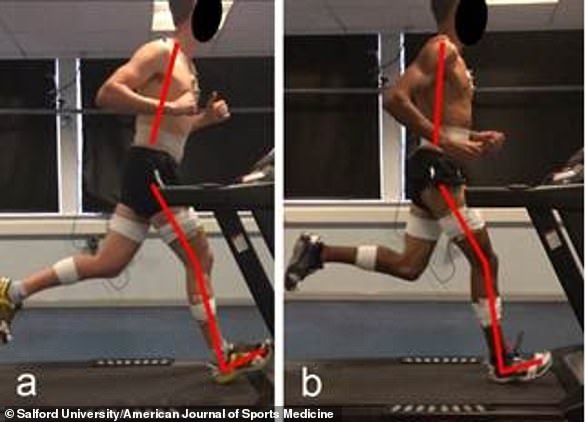 B. Runner B has the healthy pattern because he is not leaning forward when he jogs. His hips are also level.

In comparison, runner A has high foot angle on contact, Dr Bramah and his colleagues said. This makes him prone to injuring himself.

The researchers also said because of the unnamed runner’s forward lean, he may also be risking another injury. 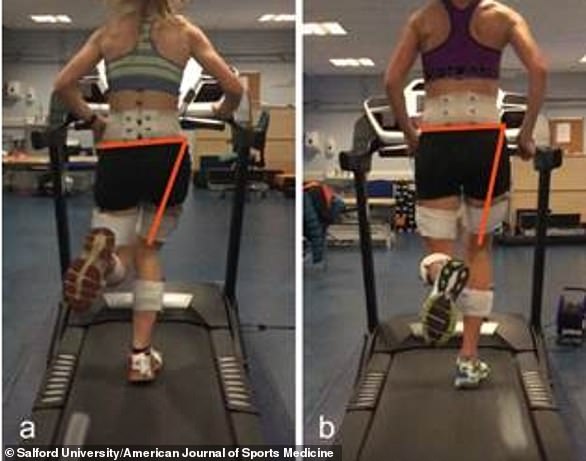 B. Runner B has the correct technique for jogging, according to the team at Salford University.

As seen on the treadmill, the woman on the right has level hips – unlike runner A, whose hips are slightly angled up on each step.

Runner A’s legs also bend in slightly more than they should, leaving her at risk of a running injury.