This is the moment a diver got more than he bargained for when a playful sea lion nibbled on his arm.

Peter Falk was diving with his friend William Drumm near Hornby Island, Canada when they across the sea lions.

Mr Drumm, 31, captured the moment, although he insisted that his friend wasn’t in any danger.

At the start of the clip, you can see the sea lion nibbling at Mr Falk’s rubber wetsuit, as it playfully tries to get the diver’s attention.

But it seems to take the fun a little too far as it tries to bite at Mr Falk’s arm.

The diver pushes the sea lion away forcefully, perhaps a little worried at what might happen to his arm.

This is the moment a sea lion tried to take chunks out of diver Peter Falk’s arm near Hornby Island, Canada

But Mr Drumm is convinced his friend wasn’t in any danger.

The photographer, 31, captured the moment his friend Peter Falk was set upon with other playful sea lions floating nearby.

‘While waiting for the spawn the sea lions have plenty of free time on their flippers, which they sometimes use to pester divers.

‘One decided to see if he could nibble on my friend’s arm. I’m not sure he found it funny at first, I think he was a bit scared and shocked but there was no way the sea lion was going to hurt him, they are just extremely playful.’ 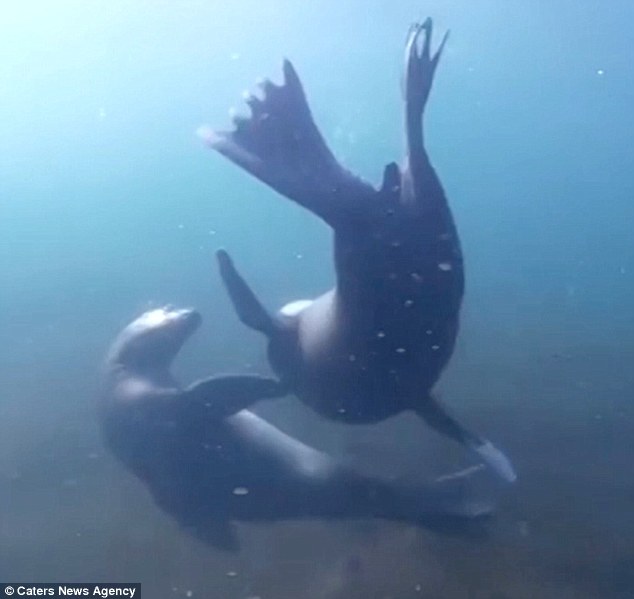 After going for Mr Falk’s arms, it can be seen playing joyfully with the other sea lions that surrounded the divers