Seahawks who never protested get berated over anthem protests

Seattle Seahawks cornerbacks Neiko Thorpe and Mike Tyson are not among the hundreds of NFL players who have knelt in protest during the national anthem, nor are they paid with tax dollars, but those two facts did not stop a woman from berating the pair on both counts.

As seen in a video that Thorpe posted to Twitter, a woman pulled up alongside the pair in a parking lot outside the Virginia Mason Athletic Center in Renton, Washington, where the Seahawks training facility is located. She deduced they were Seahawks players, but was unaware of who they were exactly.

Regardless, she told the players to ‘stand up and be men’ rather than protest inequality and police brutality against minorities by refusing to stand during the national anthem. And to emphasize her message, she pointed at both men with her index finger throughout the exchange.

Neiko Thorpe recorded the woman and posted the video on Twitter

The pair did not protest by refusing to stand during the anthem, like teammate and now-former Seahawks defensive end Michael Bennett. However, the entire Seahawks team did stay in the locker room during the anthem in Week 10.

One of the two players can be heard asking the woman’s name at one point, and she responded by asking the player who he was: ‘I’m not telling you my f****** name. What’s your name?’ 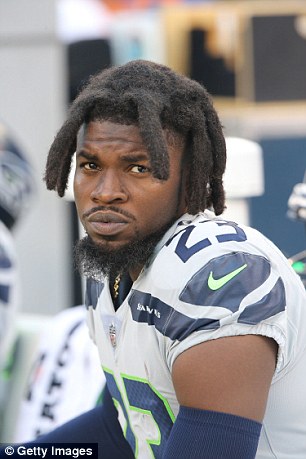 ‘You done yet?’ Tyson said before the end of the video.

Both players can be heard chuckling during the woman’s misguided verbal attack.

The NFL has benefited from tax breaks and other incentives on publicly-funded stadiums but the players are not paid with tax dollars, nor have they ever been.

Bennett, one of the more outspoken NFL players, was recently traded to the reigning Super Bowl champion Philadelphia Eagles. In September he accused Las Vegas police of profiling him, using excessive force and threatening him with a gun – something the department investigated and has since denied.

Video of the incident emerged and showed Bennett being apprehended, but the footage was inconclusive.

In November it was reported that the NFL would consider leaving players in the locker room until after the anthem, which was the league’s routine prior to 2009. The NFL has not announced any plans to change to revert back to that practice and has not implemented any rules compelling players to stand during the anthem. 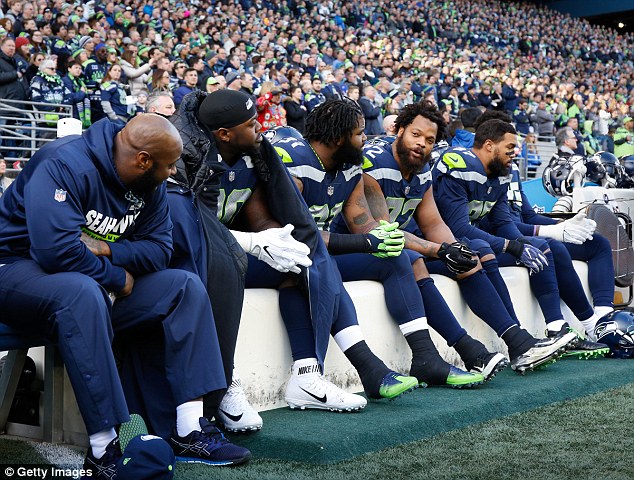 Defensive end Michael Bennett (No. 72) of the Seattle Seahawks, facing, talks with Sheldon Richardson (No. 91) as they sit on the bench during the national anthem before the game against the Arizona Cardinals at CenturyLink Field on December 31, 2017 in Seattle