‘Every time you retweet one of these things or every time you promote this idea, you are promoting ignorance, racism, genocide and anti-Semitism,’ the unnamed Hamilton International Middle School teacher said in the video. He is concealing his identity for his safety.

The video was then tweeted by a student and shared by PewDiePie who wrote to his 16.3million Twitter followers: ‘RT if you’re against everything this dumba** teacher is saying.’

Hamilton school officials have been forced to call Seattle police over the persistent threats.

An unidentified history at Hamilton International Middle School in Seattle criticized PewDiePie in class, telling students every time they retweet him they are promoting ‘ignorance, racism, genocide and anti-Semitism’

Felix Kjellberg, known online as PewDiePie, is a 29-year-old Swedish YouTuber and comedian with over 78million YouTube subscribers.

He is the world’s most watched video blogger and has become known for posting unfiltered comments.

Last year he was dropped by Disney after he posted videos of two men he paid making anti-Semitic comments. The stunt was intended to criticize Fiverr, the platform the video was streamed on.

The issue in class began when posters asking students to subscribe to PewDiePie were put up around the school.

The history teacher then lectured his students about the ramifications of doing so.

‘If something were to happen and PewDiePie were to be sued for this, you could be complicit,’ the teacher told his students in the 40-second clip.

‘If you retweet it they can make you pay a fine as well, because you officially  published anti-Semitic things. So if you are republishing this stuff, you could get in trouble for it,’ he said.

Ambika Doran, co-chair of media law practice at the law firm Davis Wright Tremaine, told KNKX that being sued for a re-tweet is unlikely. 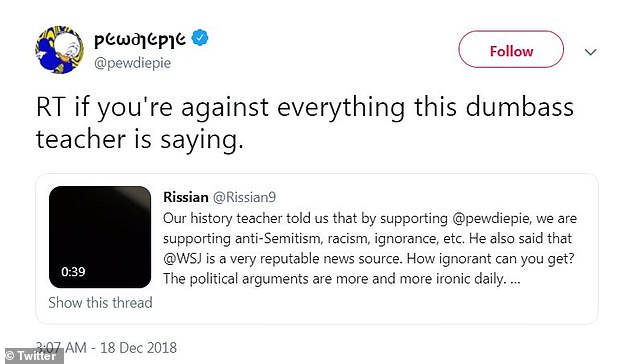 A student secretly recorded him and posted the video online, which was retweeted by the famous YouTuber 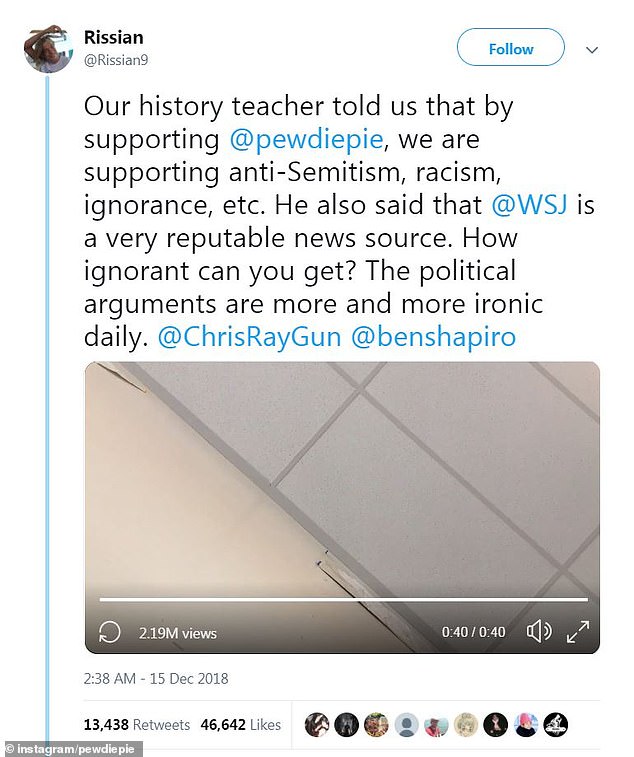 The student tweeted out the video with the caption: ‘Our history teacher told us that by supporting @pewdiepie, we are supporting anti-Semitism, racism, ignorance, etc. He also said that [Wall Street Journal] is a very reputable news source. How ignorant can you get? The political arguments are more and more ironic daily.’

That tweet was shared over 13,000 times and went viral throughout right-wing channels.

Threats included anti-Semitic comments and asked for the teacher’s name and private information be posted online.

On Tuesday, police visited the school and concluded there was no safety risk to students, staff or the building but said Seattle Police will continue to monitor social media for direct threats.

Police spokesman Sgt Sean Whitcomb said Saturday: ‘The alt-right? We got it covered. We’re watching this closely and we’re aware of that point when it does cross a line.’

For now, the teacher is choosing to remain private and he nor the school has made any comment regarding the situation. 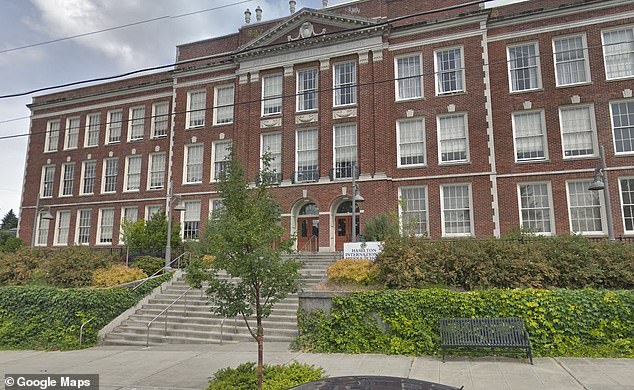