A woman who slashed her lover’s throat with a pocket knife after saying the chilling words ‘See you later, sweetheart’ has been jailed for two-and-a-half years.

The court heard Simpson drank 10 ciders before she arrived at Mr Clarke’s home on January 28 and took a knife to his throat, causing a 7cm deep gash in his neck.

Judge Greg Lynham said Simpson had intended to kill Mr Clarke at his Charters Towers home because she had already told a close friend she intended to do so.

He said Simpson had also been sleeping with the victim for about three to four days before the incident – despite their relationship having already ended.

‘She walks up behind him, pulls his head back and then runs the knife across his throat,’ Judge Lynham said.

He then addressed Simpson, saying; ‘You said the words ‘see you later, sweetheart’ and then with your right hand you dragged the knife across Mr Clarke’s throat.’ 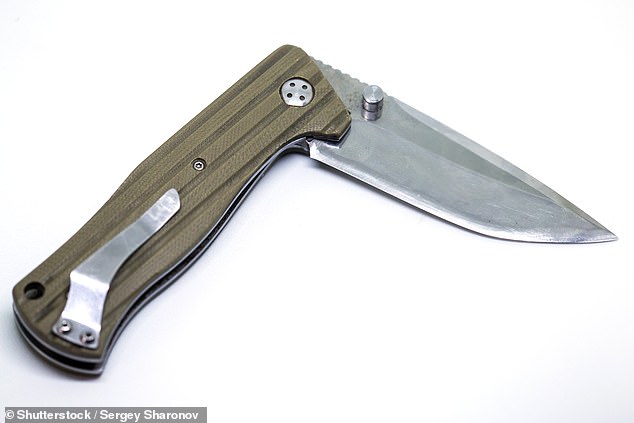 The court heard Simpson drank 10 ciders before she arrived at Mr Clarke’s home on January 28 and took a knife to his throat, causing a 7cm deep gash in his neck

As Simpson took the knife to Mr Clarke’s throat, other people in the house were able to separate the former lovers and call for emergency services.

Luckily, the pocket knife didn’t seriously injure Mr Clarke, and when the paramedics eventually arrived, they found him rolling a cigarette.

The court also heard Mr Clarke didn’t provide a complaint to the police and even submitted a letter of support for Simpson to her defence barrister, Wayne Pennell.

When handing down his sentence, Judge Lynham took into account the ‘unusual support’ shown by the victim – along with Simpson’s minor criminal history.