Britain’s youngest councillor who was described as a ‘bright Conservative campaigner’ has been found dead at the age of 21.

Clarissa Slade, who was elected at the age of 18, was found by a housemate at her university accommodation in Winchester on Monday morning.

The third year Classics student was due to return home to the town of Tiverton, in Devon, where she served as a district and town councillor, yesterday.

It is understood Miss Slade, who was born with a heart defect, had recently been complaining of pains but doctors said there was no cause for concern.

Clarissa Slade, who was elected at the age of 18, was found by a housemate at her university accommodation in Winchester on Monday morning (pictured above, Miss Slade with the Prime Minister last year)

Police say they are treating her death as unexplained and a post-mortem will be carried out in due course.

Her parents, who are also councillors for the Conservative party in their local area, have spoken of their grief at the news.

Her father Cllr Colin Slade told the Telegraph they were in the dark about the circumstances and were waiting for a report by the coroner.

He said: ‘She had a bright future ahead, she was very keen on politics and she was a very bright young councillor, the youngest in the country when she was elected. 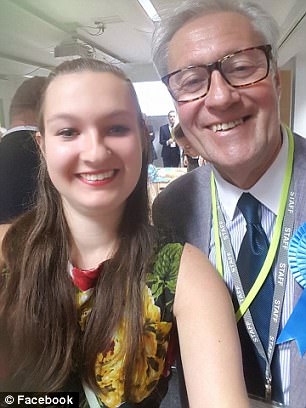 Clarissa Slade, pictured with her father Colin Slade in May 2015

‘She was looking to possibly pursue a career in politics. She was very active in the Conservative Party.’

The Telegraph reports the student had been born with a heart defect and in recent weeks and had complained of pains. It is understood doctors at hospital found no cause for concern.

Miss Slade has been described by colleagues and friends as a committed campaigner for the Conservative party and someone who had a bright future ahead of her.

She was elected as chair of Devon Conservatives Future at the age of 16 and went on to become the youngest councillor elected in the year of 2015 after winning seats on both Mid Devon District and Tiverton Town council.

Later she moved to Winchester University after winning a place to study Classics. With the support of her fellow councillors, she said at the time she was committed to continuing to represent the ward and had ‘no intention’ of stepping down. 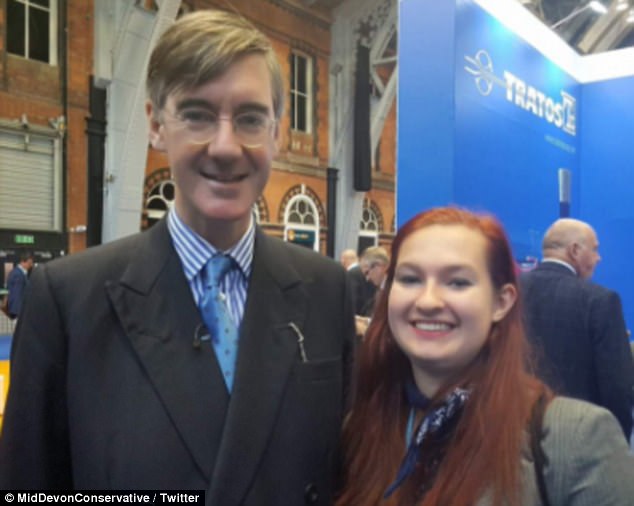 Britain’s youngest councillor Clarissa Slade, pictured with Jacob Rees-Mogg in October 2017, has died at the age of 21 Tragic: Clarissa Slade with parents Colin and Elizabeth after being elected onto both Mid Devon District and Tiverton Town Council in May 2015

‘This is clearly a great shock to everyone at the council and will affect all those who worked with Clarissa and the community she served.’

‘As our youngest ever elected councillor, Clarissa worked hard for her residents in Cranmore ward and also participated across the town in a whole in a variety of events.

‘On the national stage she had also made her mark with her involvement in youth politics.

‘Clarissa had an endearing personality to all those who knew her well, and we will miss her enormously. ‘Our thoughts at this time are with Clarissa’s parents Colin and Elizabeth.’