This is the shocking moment a car mounted the kerb and appeared to deliberately mow down a man trying to run away – sending him flying through the air.

The dashcam video footage, taken on a street in Coventry, West Midlands shows two young men running down a road – closely tailed by a white car.

The car then mounts the kerb and smashes into the man, flipping him over, before speeding off in the direction of the other man.

Despite the horrific collision, the injured man quickly jumps to his feet, pulling up his  tracksuit bottoms before running off.

Richard Smith captured the footage on a dash cam while driving along the road at around 1.45pm on Tuesday.

The 46-year-old said the car involved vanished into the distance and the man who was hit ran into a nearby building.

He said: ‘He seemed like he was running away from the car. It looked like the car was chasing after him down the street.

‘The car went onto the pavement and hit him. He went flying into the air.

‘We were shocked – very shocked. I have never seen anything like it in my life.

In the shocking footage, the man was smashed into by the car, before flipping through the air 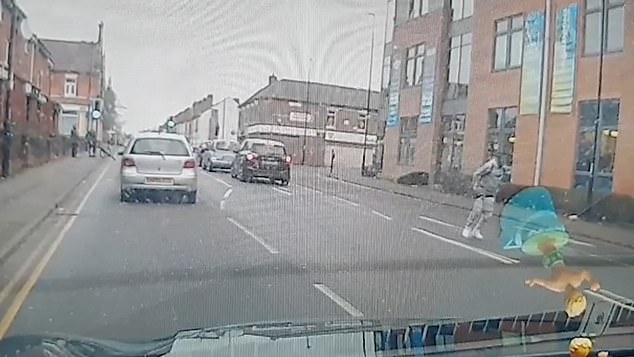 Despite being ploughed into, the man was able to get to his feet, pull his tracksuit bottoms up and run away

‘We heard the bang from inside my car. I thought he would be seriously hurt and it wasn’t nice to see.

‘I have no idea how he managed to get back up and carry on running.’

Richard had just picked up his niece from college when he saw the horrific incident.