In her first major screen part, Emma Corrin looked beguiling in a number of ethereal dresses as Princess Diana in Netflix’s The Crown.

However, the wardrobe for her latest role could not be more different. Dressed in a bright-red shorts and hoodie combination, the actress looked more like a Liverpool footballer than a member of the Royal Family.

The 26-year-old has been filming in New York for a six-part TV murder mystery series, called Retreat, in which she plays an amateur sleuth called Darby Hart – dubbed a Miss Marple for Generation Z.

Her blonde hair has been dyed pink and on one of her legs, above football-boot-style trainers, is a tattoo of a woman in floral pantaloons.

On the ball: Dressed in a bright-red shorts and hoodie combination, Emma Corrin – filming in New York – looked like a Liverpool footballer 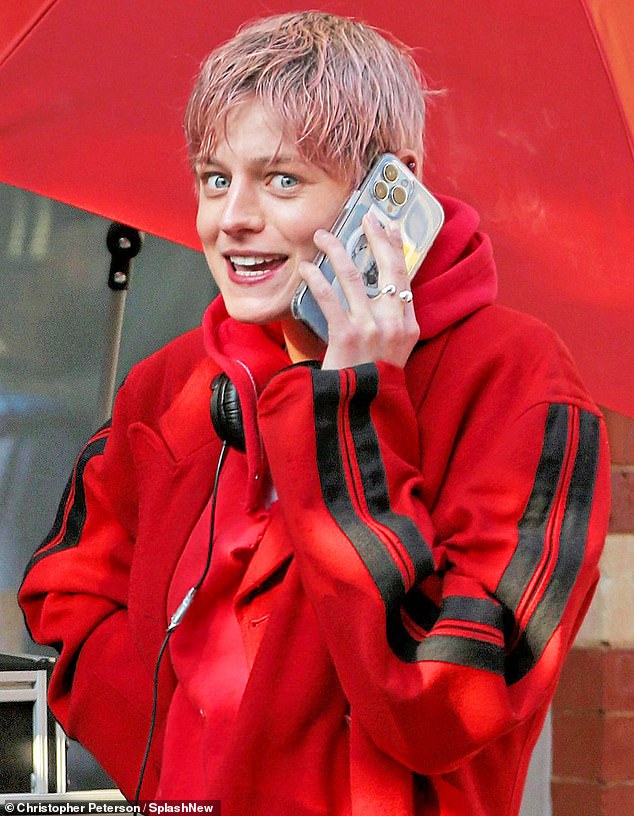 The 26-year-old has been filming for a six-part TV murder mystery series, called Retreat, in which she plays an amateur sleuth called Darby Hart – dubbed a Miss Marple for Generation Z

Blazer glory: In red flares and jumper knitted to look like a jacket, last July

Queen of the dudes: At last week’s Met Gala Ball, in her tribute to Evander Berry Wall

Blow-up: Her quirky Loewe balloon dress and bra, at the Laurence Olivier Awards in April 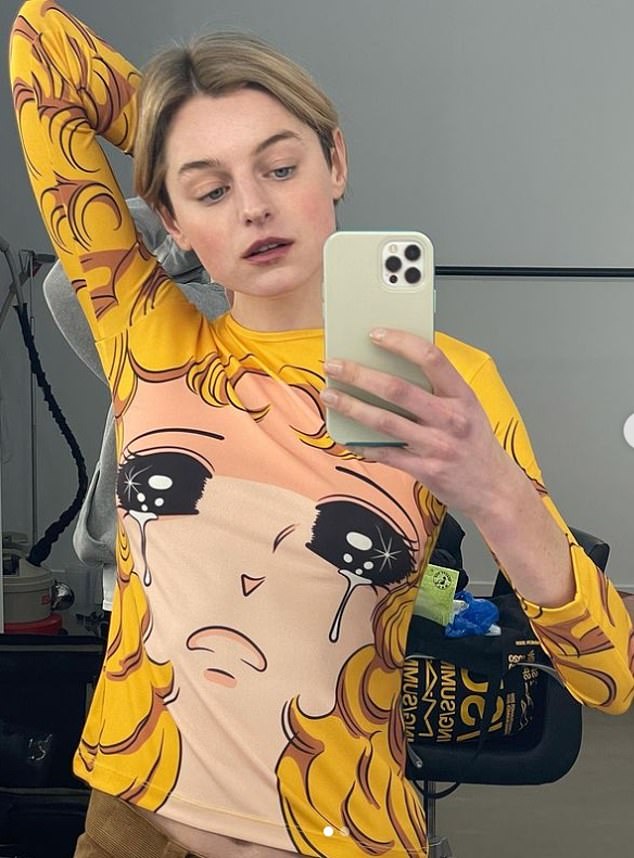 Face of fashion: Emma in a psychedelic T-shirt on social media

While the eye-catching outfit is not her own, in real life Corrin is increasingly eclipsing fellow actress Helena Bonham Carter as the wackiest fashionista in showbusiness.

For more than two decades, 55-year-old Bonham Carter has been talked about for her kooky clothes choices. Perhaps Corrin picked up tips from her while the two women were on set for The Crown, in which Bonham Carter played Princess Margaret.

Last Monday, Corrin made a stunning appearance at the uber-smart Met Gala Ball in New York wearing a plaid Miu Miu coat with a black waistcoat and shorts over white tights.

The characteristically quirky look was inspired by Manhattan socialite Evander Berry Wall, dubbed New York’s best-dressed man in the 1880s and nicknamed ‘King of the Dudes’. Corrin finished off her dazzling outfit with a top hat and a vintage Cartier pocket watch.

Last month she turned heads in a balloon print dress complete with a balloon tie bra made by Spanish luxury fashion house Loewe.

She was widely admired for an extravagantly sleeved rose-embroidered Richard Quinn mini dress that she wore on The Graham Norton Show on BBC1.

It is refreshing, say fashion industry experts, that Corrin feels able to dress with such freedom in an age when internet trolls are so ready to criticise anything out of the ordinary.

She says that her clothes are an ‘ode to self-expression’ and her outfits ‘visually encapsulate the journey I’m on’. 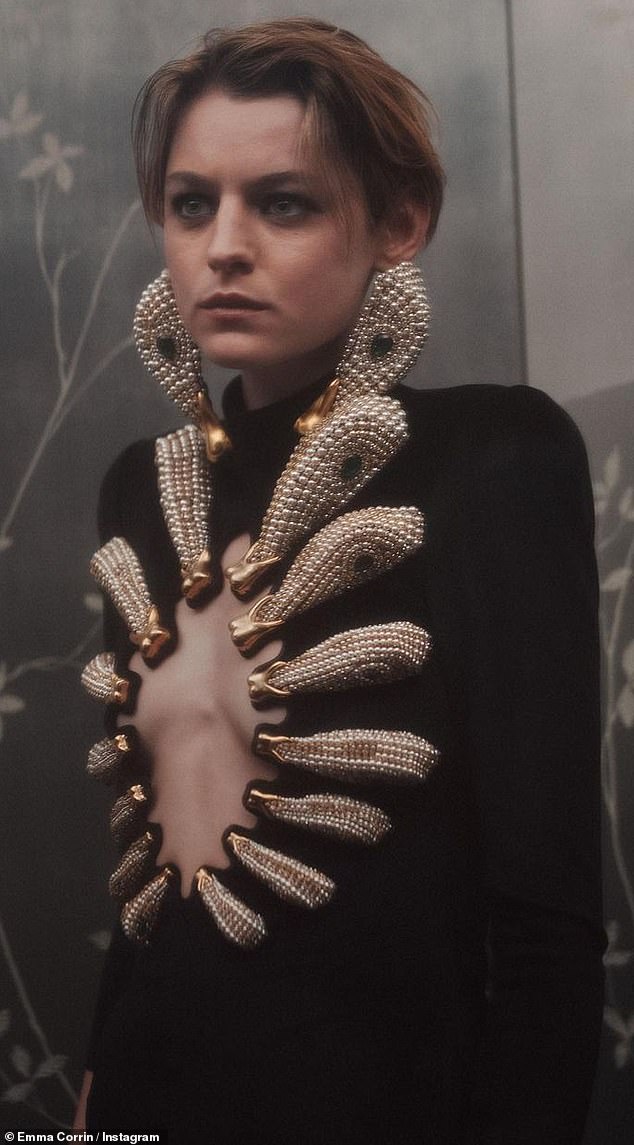 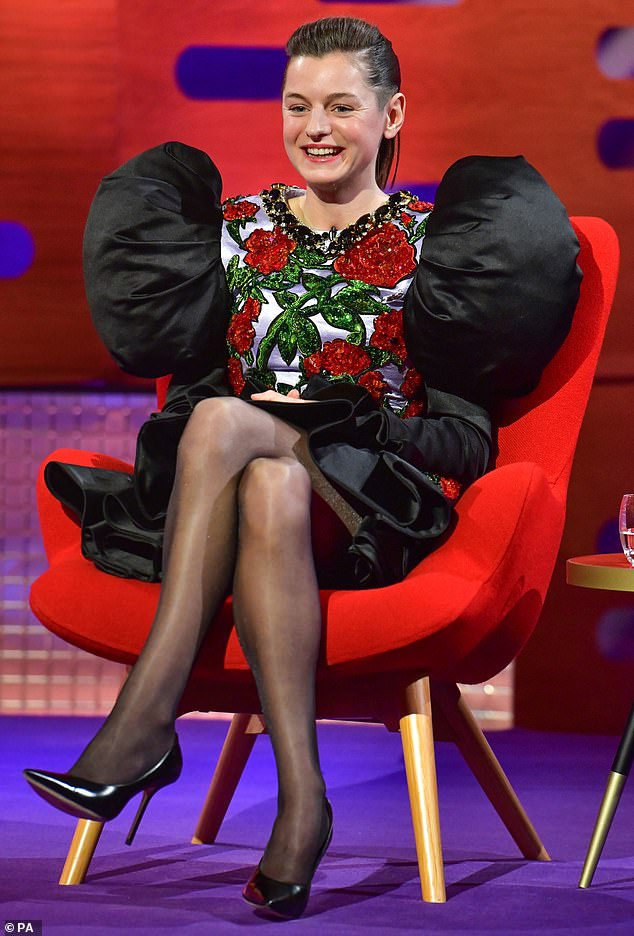 Her Richard Quinn dress on The Graham Norton Show

While Corrin is feted for her eccentric clothing choices, she is guided by the highly regarded stylist Harry Lambert, with whom she joined forces more than a year ago.

Norwich-born Lambert says he loves any bombshell outfit that prompts wide debate. In an interview earlier this year he said: ‘I guess I have a bit of a craving for those red-carpet moments that live for ever.’

He also spoke highly of Corrin, saying: ‘Emma’s a really cool girl – there’s so much depth there. She’s young. She should be having fun. She should be wearing cool things.’

Among his 2021 looks was Corrin at the Emmy awards in Los Angeles, where she wowed on the red carpet with a floor-length cream Miu Miu gown, teamed with a bonnet and fingerless gloves, showing off her long black nails. 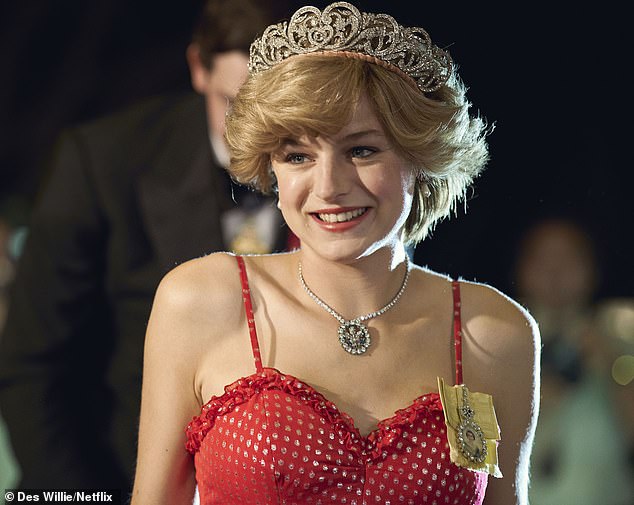 In her first major screen part, Emma Corrin looked beguiling in a number of ethereal dresses as Princess Diana in Netflix’s The Crown

Both Corrin and Lambert have become renowned for posting images of the creations on the social media site Instagram.

Kent-born Corrin announced last year that she identifies as nonbinary and lists she/they as her pronouns on Instagram, where she has 710,000 followers. She has said: ‘I think visibility is key with these things. My journey has been a long one and has still got a long way to go.

‘I think we are so used to defining ourselves. That’s the way society works within these binaries and it’s taken me a long time to realise that I exist somewhere in between.

‘I’m still not sure where that is yet.’