Silicon Valley star Thomas Middleditch has opened up about how an open marriage saved his relationship with costume designer Mollie Gates.

The Canadian actor unexpectedly revealed his penchant for swinging in an interview with Playboy published Tuesday.

‘To be honest, swinging has saved our marriage,’ Middleditch said.

‘Swinging has saved our marriage’: Silicon Valley star Thomas Middleditch revealed that he and wife Mollie Gates are part of the swinging community in the latest issue of Playboy

Middleditch laid bare the intimate details of his relationship with Gates, whom he married in 2015, when the Playboy interviewer mentioned that he and one of the writers on his film Godzilla: King of the Monsters visited a swinging club with their partners.

‘I don’t know how much I can say, because I don’t want my wife to be mad at me,’ the 37-year-old said when asked if he and his wife of four years were familiar with the swinging scene.

‘Only after I got married was I like: “Mollie, I’m sorry, but we have to get nontraditional here.” To her credit, instead of saying “F*** you, I’m out,” she was like, “Let’s figure this out.”‘

He went on to explain: ‘Mollie and I have created our own rules, and compared to most of the people we’ve met who do this kind of s***, our rules are strict.

‘We’re not off on our own; we’re together, a unit. It’s a perpetual state of management and communication.’

Middleditch admitted that the decision to be ‘part of the lifestyle’, which he says is what swinging is called these days, hasn’t been smooth sailing.

‘We argue over it constantly,’ he said, ‘but it’s better than feeling unheard and alone and that you have to scurry in the shadows.’ Getting intimate: Middleditch said he and Gates made the decision to take their relationship down a nontraditional route after they tied the knot in 2015. ‘Mollie and I have created our own rules, and compared to most of the people we’ve met who do this kind of s***, our rules are strict,’ the 37-year-old Canadian actor said

Middleditch insisted that he loves his wife ‘like I’ve never loved anyone before’ and said joining the swinging scene was ‘absolutely not’ something he’d aspired to.

‘I self-deprecatingly call myself a pervert, but that’s not what it is. I just like it. I’m sexual,’ he told Playboy, adding that he never aspired to be in an open relationship.

‘I’d always thought I was a romantic and that when I fall in love, that stuff fades away. It does for some years — enough to be like: “I should get married, and I’ll be different.”

‘But it’s part of me. If that’s part of your being and it feels important to you, find a way to explore it, because repression sucks.’

He described himself as the more aggressive partner in his marriage but said the pair have managed to find a balance.

‘It’s a perpetual state of management and communication, to the point where it’s like: “All right, we’ve got to stop. Chill,” Middleditch said. ‘I’m gas, and she’s brakes.’ 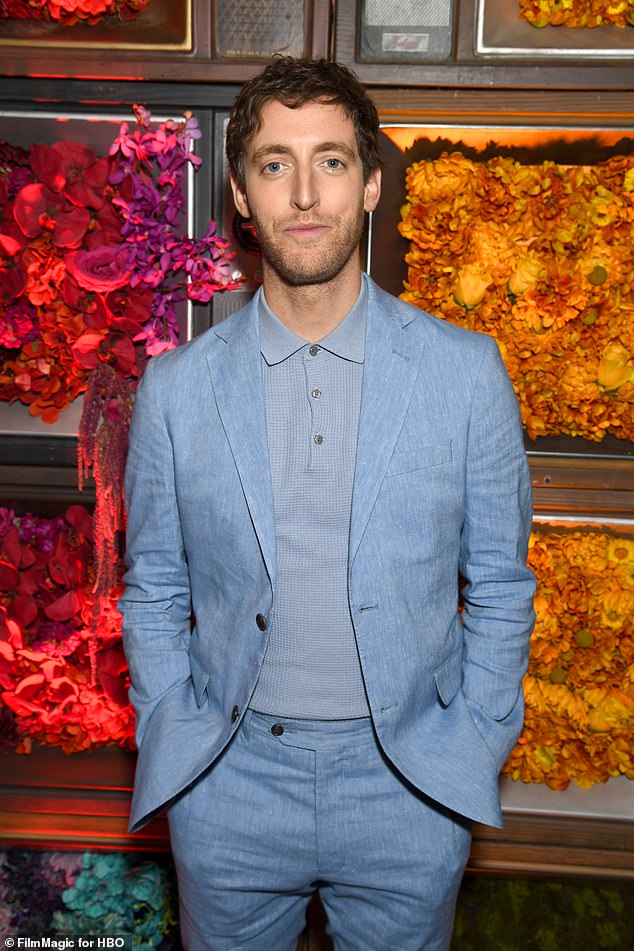 Candid confession: Middleditch insisted that he loves his wife ‘like I’ve never loved anyone before’ and said joining the swinging scene was ‘absolutely not’ something he’d aspired to

He said that his fame has added an extra layer of complexity to the equation.

‘There’s a lot of negotiation, and adding fame sometimes makes it easier and sometimes complicates things,’ he said.

‘That’s the forever-changing landscape in our relationship, because it’s about everybody feeling safe. It’s a game of inches on a minefield to try to predict who’s going to feel safe.

‘My first concern is Mollie. Anything that happens has to be run by the queen.’

When asked if he’s concerned that speaking publicly about being part of ‘the lifestyle’ would inadvertently make him a mascot for the community, the actor said: ‘I would be honored to be the face of something.’

‘I don’t give a fuck, but my wife is more private, so I have to juggle that,’ he added.

He urged anyone interested in swinging to ‘know where the walls of the box are’ and to ‘bring a therapist along for the ride’.

Tech shutdown: Middleditch has played Richard Hendricks on HBO’s Silicon Valley since 2014. The show’s sixth and final season is set to premiere on October 27

Middleditch said the couple’s experience inspired one of his next small screen ventures.

‘This is actually the premise for a comedy series we’re writing together,’ he said.

The actor has starred on HBO’s Silicon Valley as bumbling software designer Richard Hendricks since 2014.

The show, which follows the founders of a tech startup called Pied Piper, kicks off its sixth and final season on October 27.

Middleditch recently played Dr Sam Coleman in Godzilla, which premiered in May.