A hairdresser who suspected an intruder was getting into her home rigged up a secret camera in her bedroom and caught her neighbour rummaging through her knicker drawer.

Sharon Bulman, 45, of Skelton, North Yorkshire, watched in horror as she saw good friend Steve Gill, 49, rifling through her underwear in video taken on a device she had hidden in an owl cushion.

Married HGV driver Gill, who Sharon and her firefighter husband James relied upon to keep watch on the three storey townhouse when they were away, committed a sex act with one of her pop socks.

And while doing so Gill, who had made a copy of a spare key the couple gave him while they were away on holiday, watched a secretly recorded video of Mrs Bulman chatting to a friend. 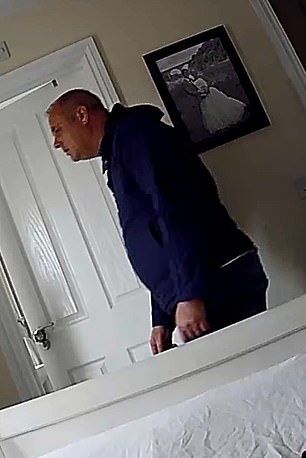 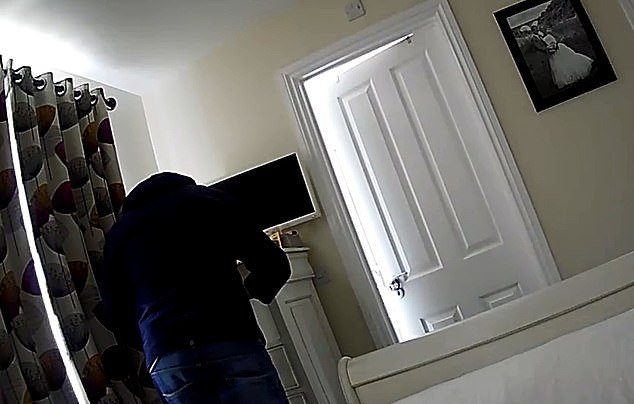 The 49-year-old admitted burglary and stalking and was given a suspended jail term and a restraining order to stay away from Mrs Bulman, which is likely to mean selling his £210,000 home.

After the hearing at Teesside Crown Court, Mrs Bulman, a hairdresser and successful amateur runner, said that Gill had invaded her family’s privacy in ‘the worst possible way.’

The family moved into their home when it was first built seven years ago, with father of two Gill and wife Karen moving in a short while later.

The two couples became friends with Gill offering to do odd jobs and look after their daughter if they were out. 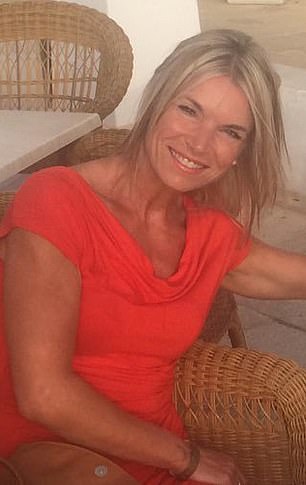 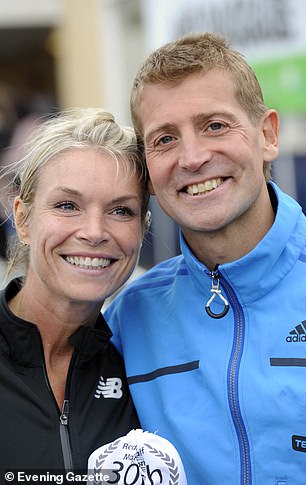 Mrs Bulman, left, and with her husband James, right, said the incident had left her feeling ‘disgusted, filthy and disappointed’

But 18 months ago Sharon started to become suspicious of his reasons for being helpful.

She said: ‘The first time I wondered what was going on was one day that he was in having a coffee and I went upstairs to change into my running gear which was laid out on the landing.

‘As I got ready I saw movement and caught sight of Steve running down the stairs. He later explained that he had gone up to look at our carpet which we’d had cleaned but now of course I believe differently.

‘On another day as I was driving out of the estate I looked in my car’s rear view mirror and got a shock because I thought I saw a figure standing in our house.

‘James also caught Steve leaving our back gate with a can of WD40 and he said he looked very sheepish. He hurriedly explained to James that I’d been complaining about the back door squeaking. 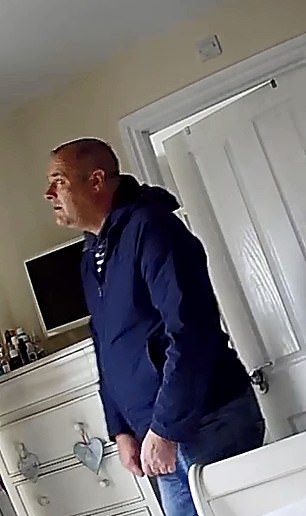 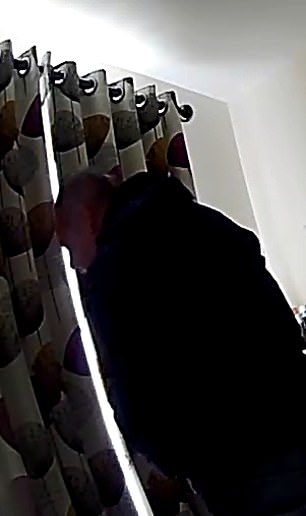 Gill wanders over to the window to draw the curtains, and then is filmed peering outside

‘I’d said no such thing and we became convinced something was going on but I didn’t know what, although I suspected he might be looking in my underwear drawer.

‘I started deliberately leaving it slightly open and sure enough when I would get home it would be shut so someone had to be in there tampering with it.

‘I would very often get texts from Steve saying: ‘Hello lovely Sharon, when do you think you’ll be getting home?’

‘At the time I didn’t think much of it, just that he was being friendly, but again it makes sense now because he wanted to know how much time he had undisturbed in our house.

‘Once we really strongly suspected him James bought a camera from Argos and I hid it inside a cushion which had an owl on it. I took out one of the owl’s eyes and the camera lens poked through.

‘The camera was triggered by movement and it caught the whole thing as he walked into our bedroom.

‘It was absolutely awful to see him walk into our room as though he owned the place, close the curtain,s have a peep outside and then head straight for my underwear drawer. It looked like something he’d become used to doing.

‘Whilst he was doing what he did he was watching and rewinding a video on his phone. You can see the screen on the video and it appears to be a video of me just talking and close up.

‘The whole thing is really creepy and unsettling, he was given a key because he offered to help us while we were on holiday in Cyprus but he’s abused our trust in the worst possible way. 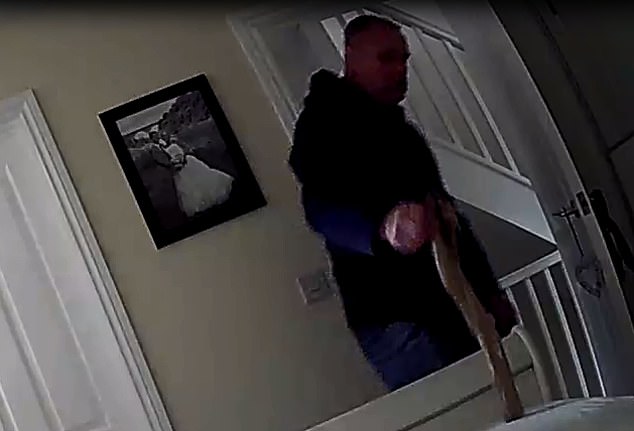 ‘Lots of people rely on good neighbours for help but you never expect someone to do something so horrible, it’s been really hard to deal with.’

Gill admitting burglary and stalking, but dodged prison because he had never been in trouble before and being locked up would have an impact on his two sons and mother.

The court heard that his wife is standing by him.

She was in the public gallery, and was one of a number of family and friends to write a letter of support for the judge to read.

He was given a 12-month jail sentence, suspended for two years, ordered to go on a sex offenders’ treatment programme, do 150 hours of unpaid work, pay £200 costs and £500 compensation to Sharon.

Describing the offences of burglary and stalking as ‘highly unusual examples’, Judge Peter Armstrong told him: ‘It was quite extraordinary behaviour for a man of 49 with no previous convictions.

‘Suspecting things only happened when you were there, your neighbours carried out some detective work and eventually a camera caught you doing what has been rightly described as quite outrageous behaviour.

‘The most serious aspect of this case is the effect on Mrs Bulman.

She must have been devastated to discover what had been happening. No doubt, the thought of you going through her underwear drawer has caused her considerable distress.’

Andrew Turton, mitigating, said Gill was going through a troubled time in his marriage, and appeared to be getting depressed.

He told the court: ‘Custody would have a devastating effect not only on him but also his family.

A lesson has been severely learned by this defendant in his fall from grace.

‘There is clearly distorted thinking in terms of going through the act of entering the house and doing what he did.

He has a good understanding about how his neighbour feels.’

Gill, who sat through the entire hearing with his head bowed, was described by Mr Turton as a loving father and loving husband.

The lawyer added: ‘It is a disturbing case and an unusual case. It was not designed to cause distress because it was designed to carry out the nefarious activity in secret.

‘He was acting out a fantasy in a situation that was secret.

Obviously, he hoped never to be discovered.

‘There was a level of estrangement from his wife, something of an attraction between him and his neighbour which he is candid enough to accept was a misinterpretation on his part in relation to the signals he was receiving.

‘A perfect storm was created given he has in his background some fetish tendencies.’

In a statement, Sharon told how Gill was becoming over-friendly towards her when she first noticed things out of place at her family’s semi-detached home.

She said the ordeal has left her feeling ‘disgusted, filthy and disappointed’ and said: ‘I thought he was a friend and could be trusted, but he has proved me wrong.

‘I no longer want to be in my bedroom and have trouble sleeping. I feel like throwing my underwear out in case anything else has happened.’