The Costa Blanca and Valencian coastline have been pummelled by a vicious storm this morning, shutting Alicante airport, flooding homes and blanketing areas with at least a foot of snow.

Flights to London, Newcastle, Bristol, Edinburgh and other major cities were cancelled as the airport shut for the day, forcing holidaymakers to either travel to a different airport or sit tight until the dangerous weather moved on.

Towering waves have been pictured slamming into the coastline while, in Denia, seawater was filmed gushing through the streets of the city.

Snow drifts have also built up inland as a seven-hour shower in Villena, Valencia, left the city’s 35,000 inhabitants cut off after up to three inch piles of the white stuff blocked roads.

A red alert was issued for Storm Gloria yesterday, before it smashed into the region, warning it would bring heavy rain, snow, up to 75mph winds and waves that could reach eight feet in height.

It is expected to move towards the north-west of Spain tomorrow, with the bad weather unlikely to subside before Wednesday, the Spanish State Meteorological Agency (AEMET) said.

A 54-year-old Romanian woman died from hypothermia in Gandia, Valencia, following the vicious weather, local media reports. A 44-year-old man also died yesterday when he was run over by a van that lost control in snow-covered Santander, Asturias.

Waves batter the beachfront of the coastal town of Javea, Alicante, as Storm Gloria sweeps in from the Mediterranean 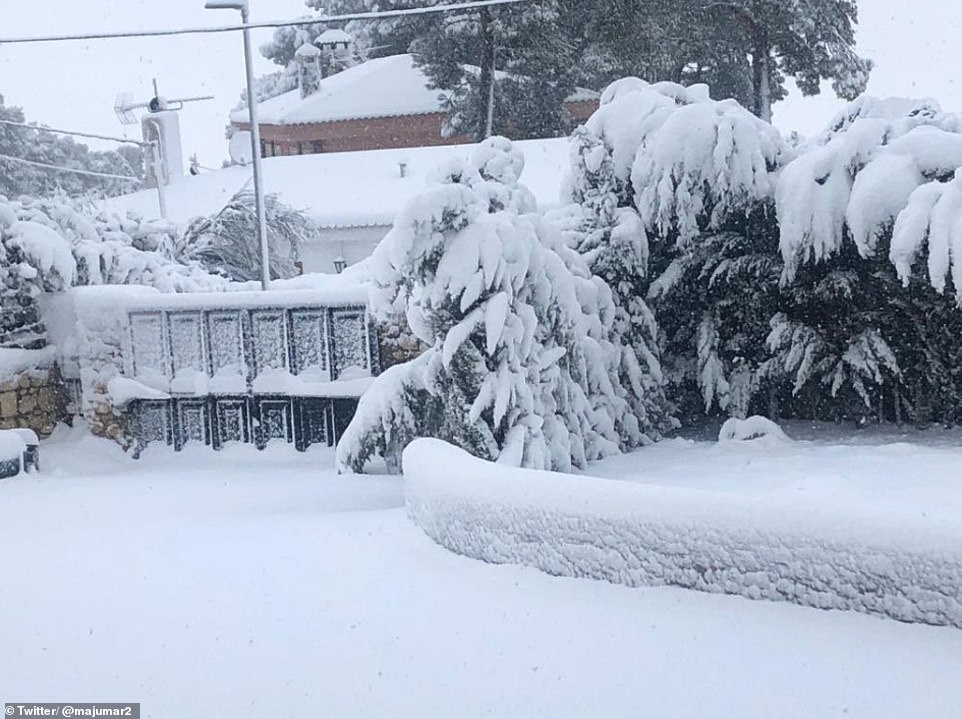 At least a foot of snow covers a driveway, gate and trees in Biar, Alicante. It is several kilometres inland from the coast 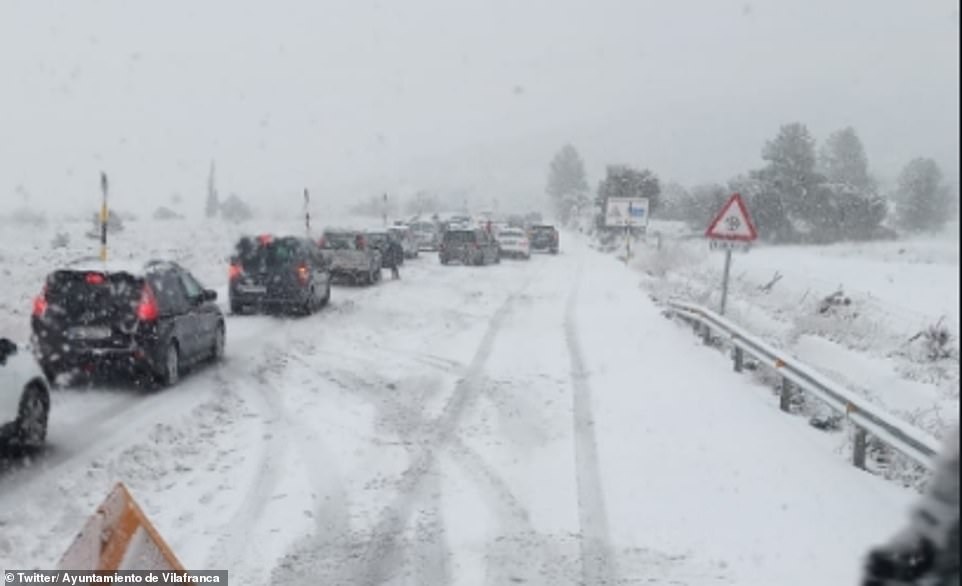 Snow plough moves down a blocked main road in Vilafranca, about 40 miles from the Valencian coastline. A 54-year-old woman has died, local media reports, and a 44-year-old man was killed yesterday by a van that had lost control 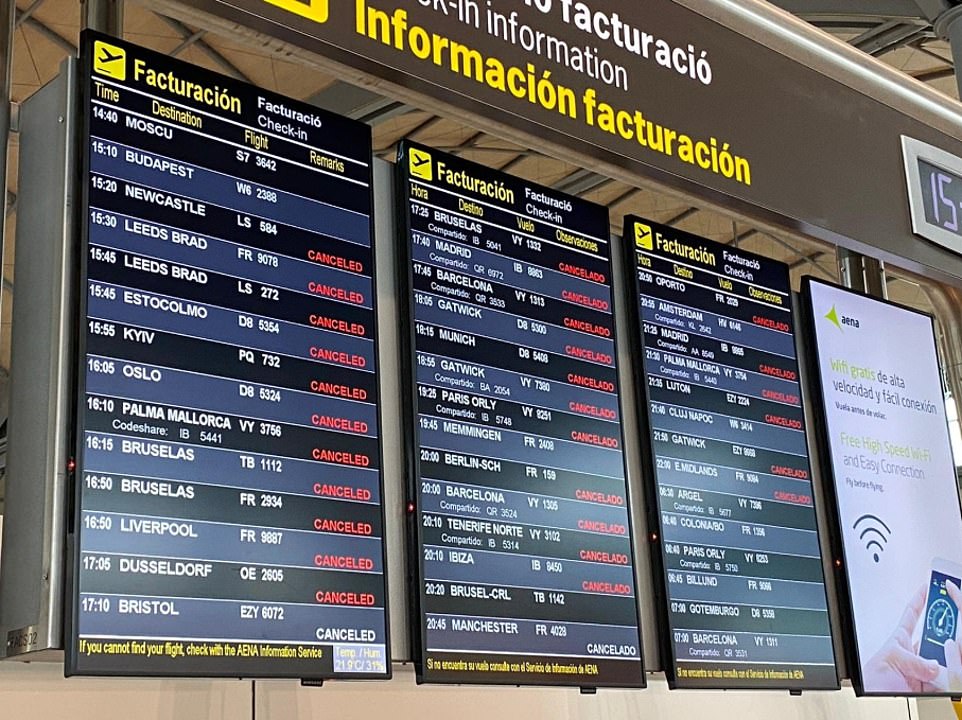 The departures board in Alicante-Elche airport yesterday. It was closed from 1pm ahead of the arrival of Storm Gloria, and has remained closed today 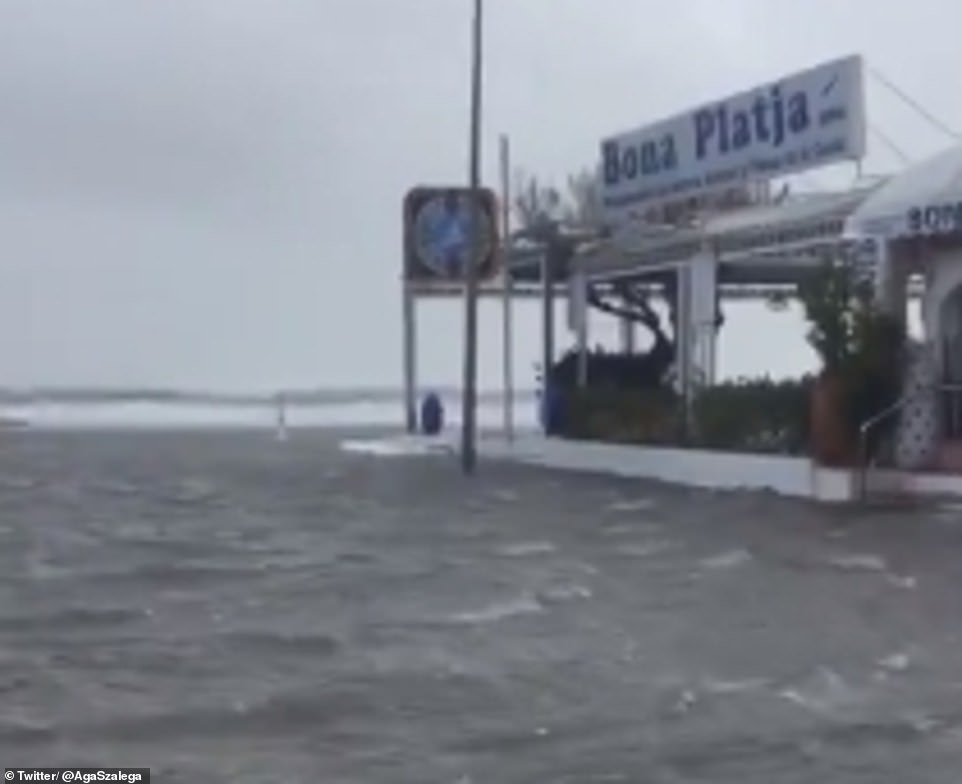 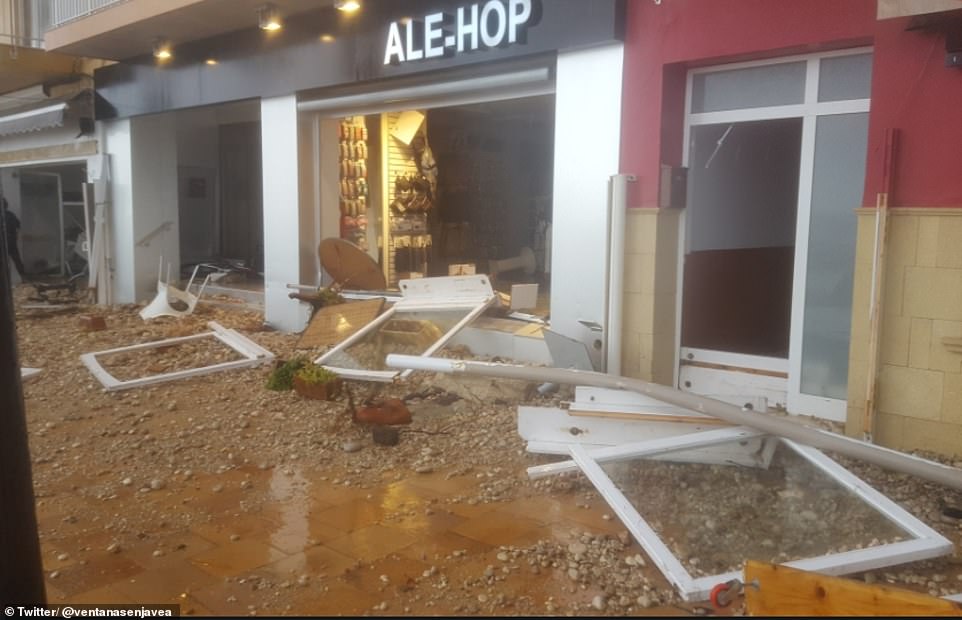 Residents in Javea emerged as the storm began to pass to find the storefront of Ale-Hop had been smashed, along with others

The beach in Javea, further down the coast, has been pictured strewn with rubble and bits of wood washed up as the storm battered the headland.

Storefronts were also pictured smashed on the city’s contents, with glass panels and furniture strewn across the pavement outside.

Waves have been filmed rearing up to several feet high before slamming against the coastline in Calpe, Alicante, by the Alicante Meteorological Project.

The river Algar, in the mountains, has also been filmed bursting its banks and gushing over a tourist viewing platform at the Algar waterfall in a torrent of rapidly moving water.

As the storm hammered its way over the Spanish mainland the rain froze, causing a deluge of snow to fall over inland areas in the interior of Valencia and Alicante.

The 35,000 residents of Villen, Valencia, were isolated this morning after a seven-hour snowfall left snow drifts between two and three inches high blocking roads into and out of the town. 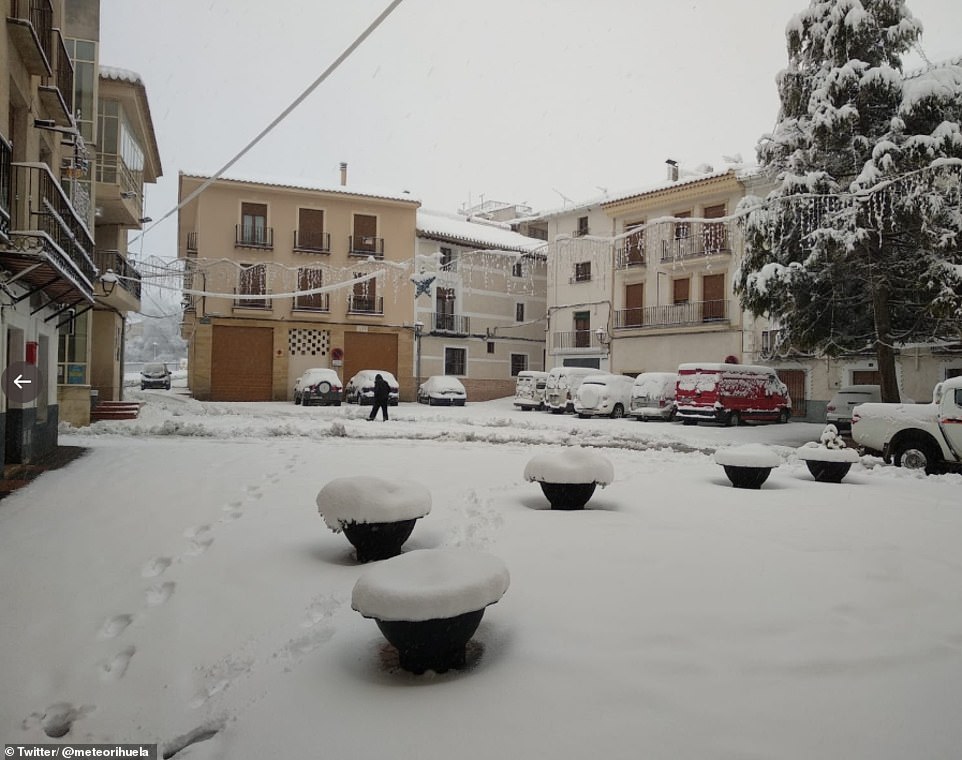 Snow drifts blanketed the town of Albacete in Alicante as Storm Gloria moved through the region this morning. One town in Valencia was completely cut off after a seven-hour snowfall left up to three inches of the white stuff blocking roads 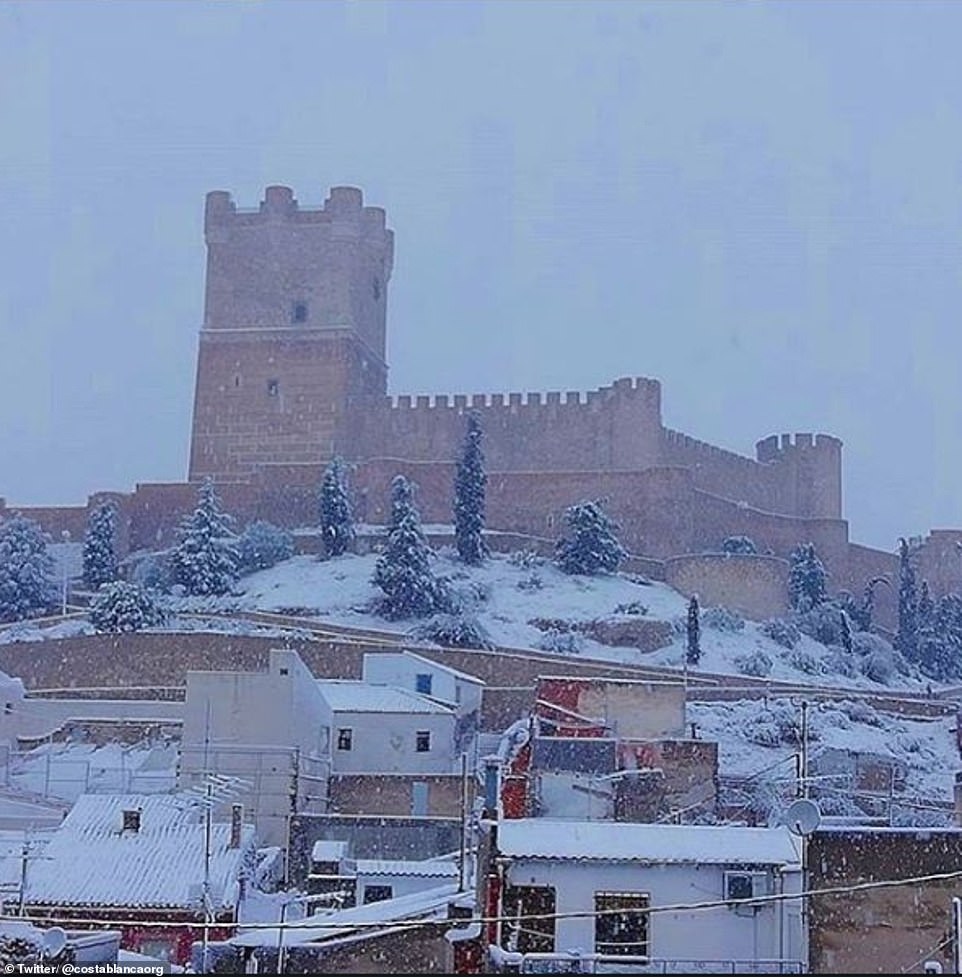 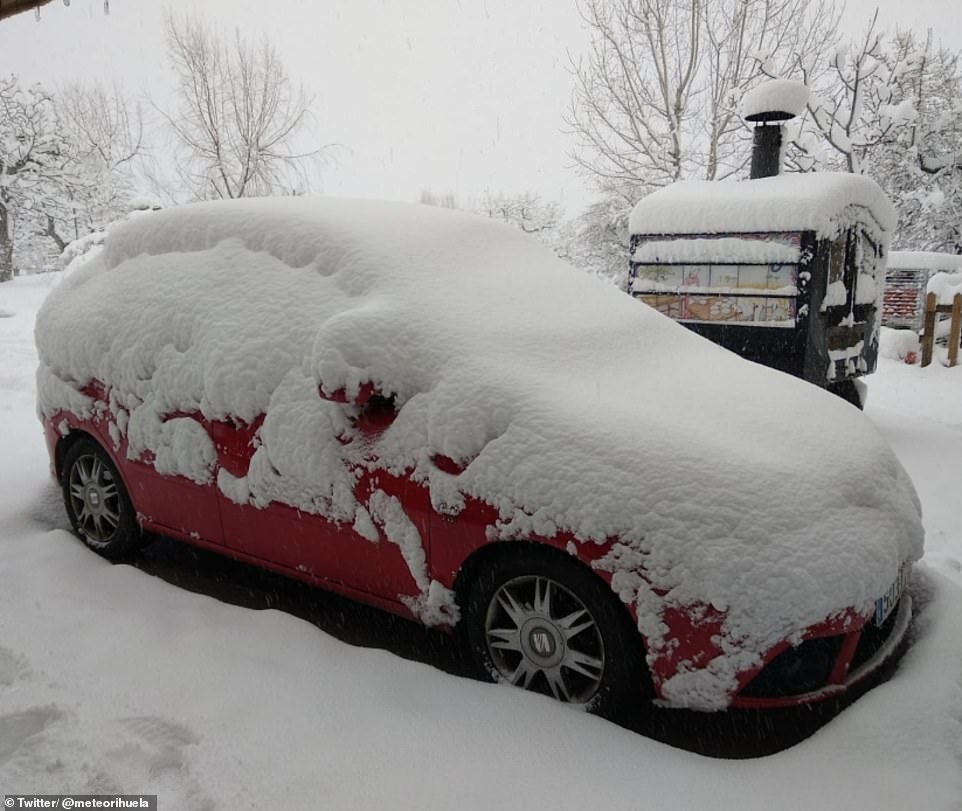 A car is pictured covered in snow after stormy weather hit Albacete inland from Valencia, Spain 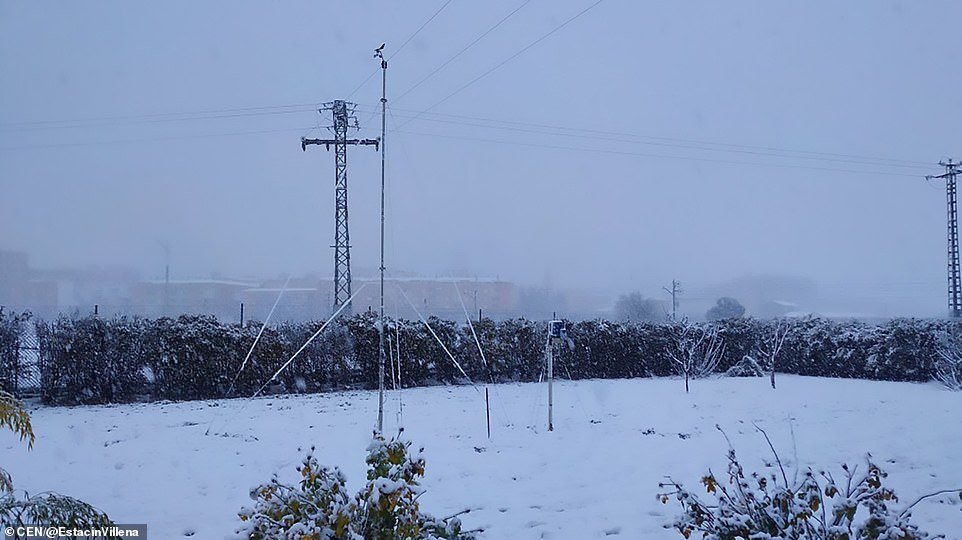 Snow was also pictured covering fields in Villena. The 35,000 residents of the town were cut off following snowfall

Ploughs were also seen clearing the roads in Vilafranca, 40 miles from the Valencian coast, as piles of snow made major highways impassable, while many Spaniards took to social media to express their shock at the winter dusting.

The 13th century Atalaya castle in Villena, Alicante, was photographed covered with snow next to houses and businesses in the area. Snow drifts have also been pictured in Biar, Alicante, and across the area around Villena.

A brief snow shower was also filmed on the Costa Blanca in Mijas, the Olive Press reported.

Ryanair, which has several affected flights, told MailOnline yesterday that a ‘small number’ of its flights would be diverted to either Murcia or Valencia airports. 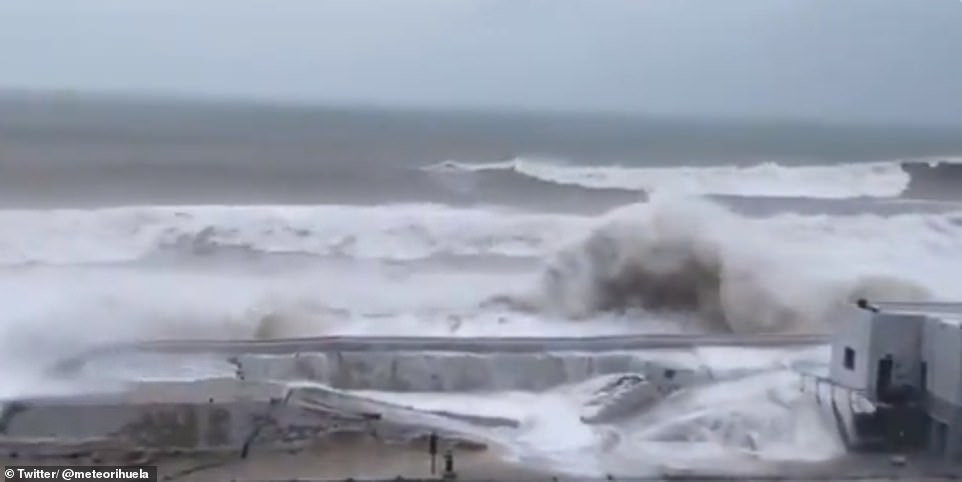 Waves batter the seafront in Calpe, Alicante, which is popular with tourists. Authorities had warned that the waves could be up to eight feet high when the storm hit 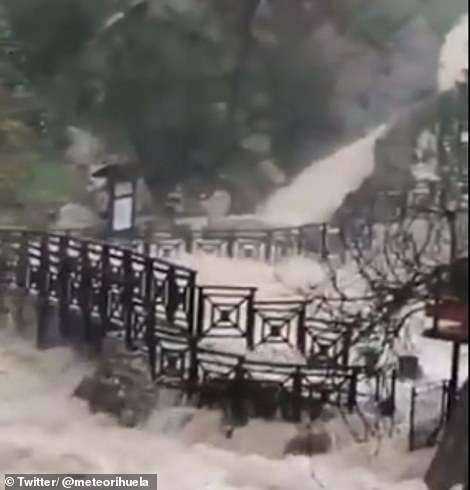 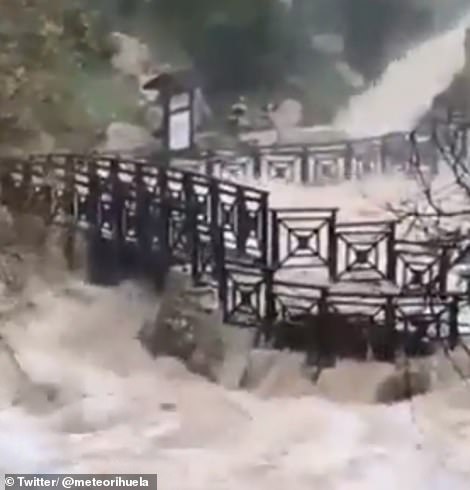 The Algar waterfall has also been filmed bursting its banks and swamping a tourist viewing platform with a torrent of water, as the Alicante river swelled with the heavy rainfall

‘All impacted customers were notified by email and SMS message, they said. Customers arriving in Murcia or Valencia as a consequence of diversions will be coached to Alicante.

‘Ryanair apologised for these schedule changes, which are completely outside of the airline’s control.’

Alicante-Elche airport was closed at 1pm yesterday, ahead of the storms arrival. Airport chiefs said that the airport would remain closed today due to the storm.

It suffered roof damage last week when a fire broke out, which has also been blamed for the current closure.

A statement from Spanish airport operator AENA said: ‘Alicante-Elche airport will remain closed to air traffic today. The alert is being maintained because of Storm Gloria and continuing additional security measures due to the fire last week.’

There are reportedly 33 provinces affected by bad weather with nine of them on red alert: they are Teruel Albacete, Murcia, Barcelona, Tarragon, Girona, Valencia, Castellon and Alicante, according to local media.