Early morning snowfall has been recorded in parts of the UK, with the Met Office declaring it a white Christmas for the first time in three years.

Reports of snow had come in from Leconfield in Humberside and Wattisham in Suffolk as of 5am on Christmas morning. Photos also showed snow on the ground in Hessle, East Yorkshire.

The Met Office had said Christmas Day is likely to be clear and dry for most, but showers in eastern areas of England had the potential to bring sleet or snow in the morning.

It comes amid widespread flooding around the country with people rescued from vehicles and others evacuated from their homes following a period of heavy rain.

The arrival of Storm Bella on Boxing Day will bring further downpours and winds of up to 60-70mph in exposed coastal locations.

The last official white Christmas – defined as if a single snowflake falls during the 24 hours of Christmas Day, anywhere in the UK – was in 2017, when 11 per cent of weather stations recorded snow falling.

Early morning snowfall has been recorded in parts of the UK, with the Met Office declaring it a white Christmas for the first time in three years. Reports of snow had come in from Leconfield in Humberside and Wattisham in Suffolk as of 5am on Christmas morning. Pictured: Snow this morning in Hessle, East Yorkshire 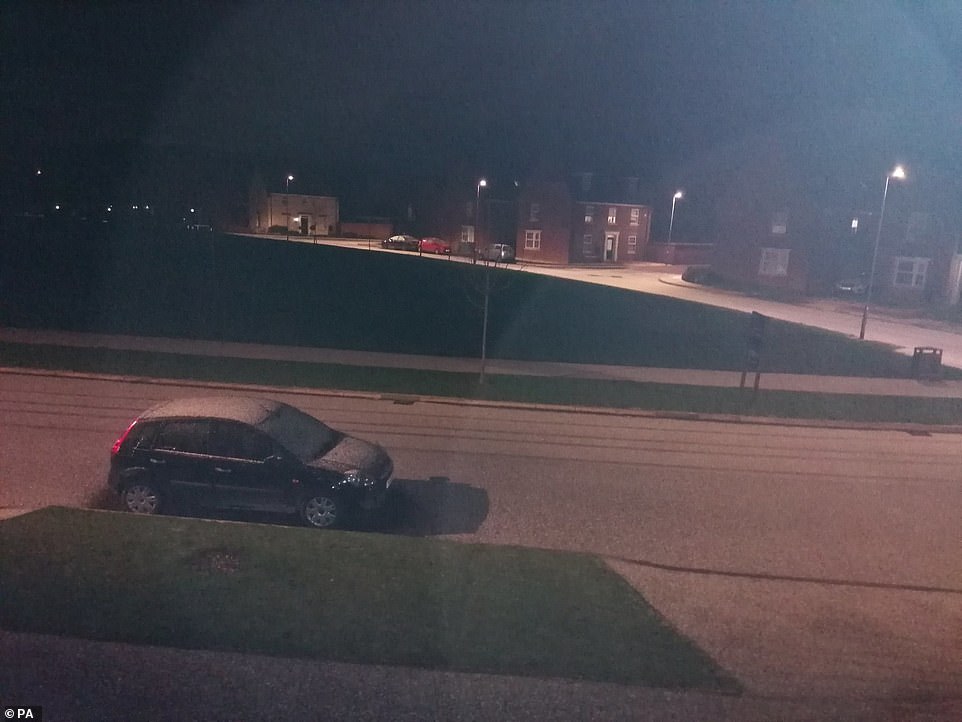 The Met Office had said Christmas Day is likely to be clear and dry for most, but showers in eastern areas of England had the potential to bring sleet or snow in the morning. Pictured: Snow on the ground in Hessle this morning 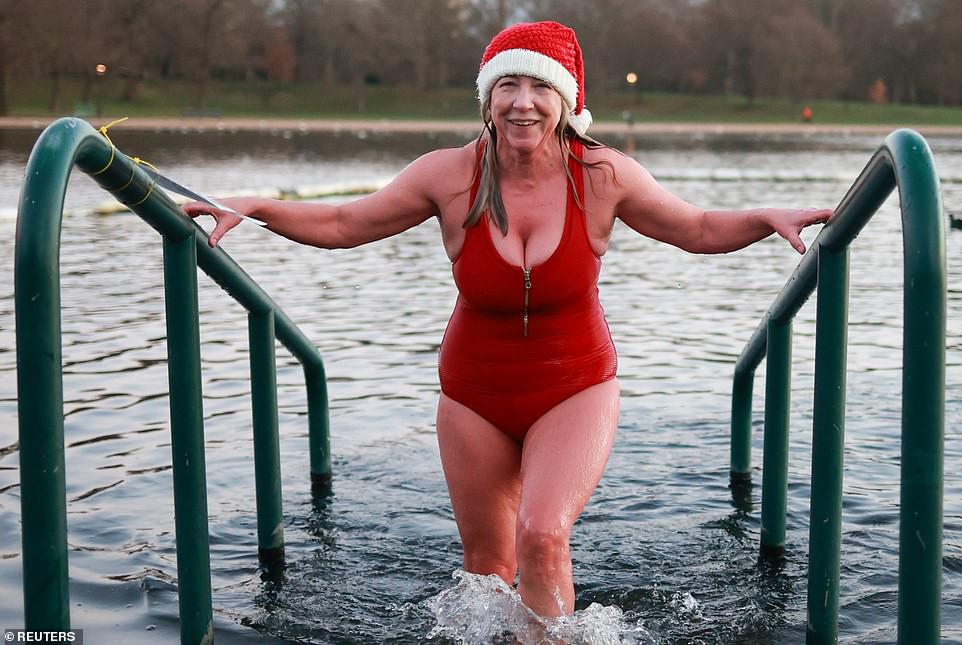 Despite the cold temperatures in London this morning, some still flocked to the Serpentine lack in Hyde Park to take part in the traditional Christmas Day swim

‘So it could be a “white” Christmas in as much as lots of people are going to wake up to a frost.

‘They’ll be very light, scattered, not everywhere will see them by any means, and for most areas it’s going to be a pretty dry day, just cold, but there is a chance we could see a few showers of snow across eastern parts of England, particularly early on Christmas Day.’

However, the focus for many will be on the rain that has already fallen after the wet conditions brought flooding including in the Midlands. 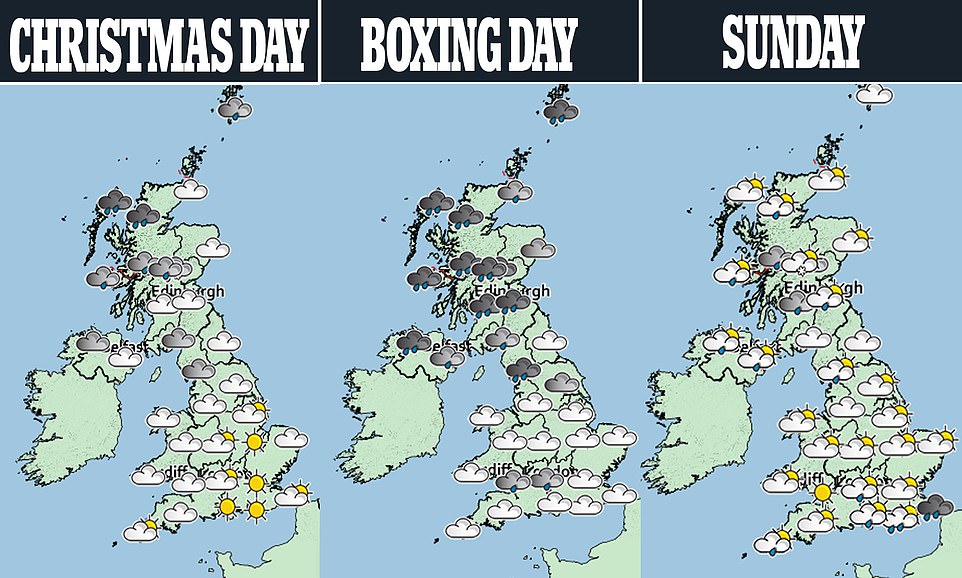 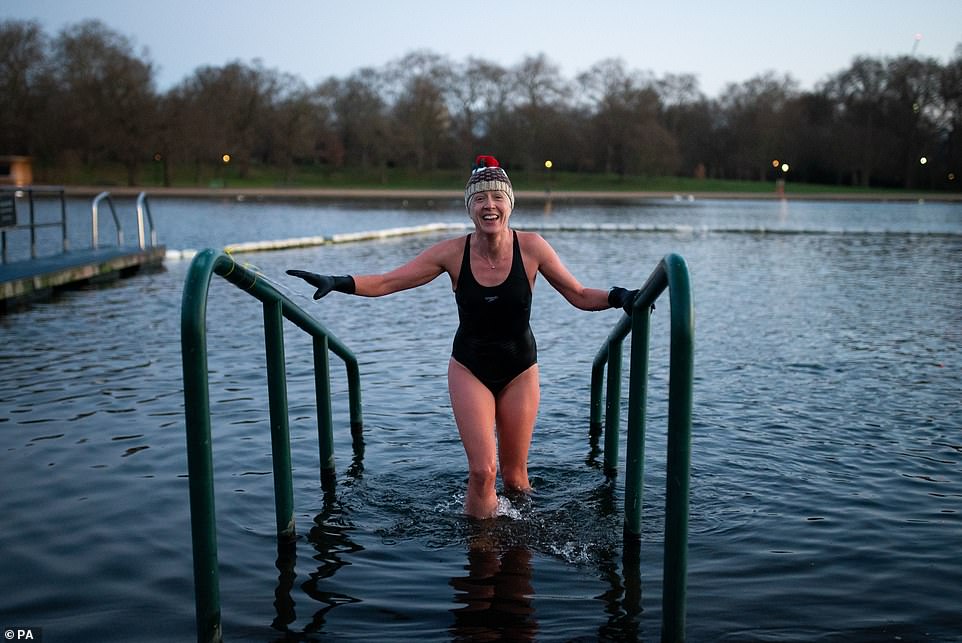 Swimmers in the Serpentine have traditionally met every year to compete in the Christmas Day swim. The tradition stretches back to 1864 in what is known as the Peter Pan Cup. Although this year’s formal competition was cancelled, it did not stop brave Britons from going for a swim anyway 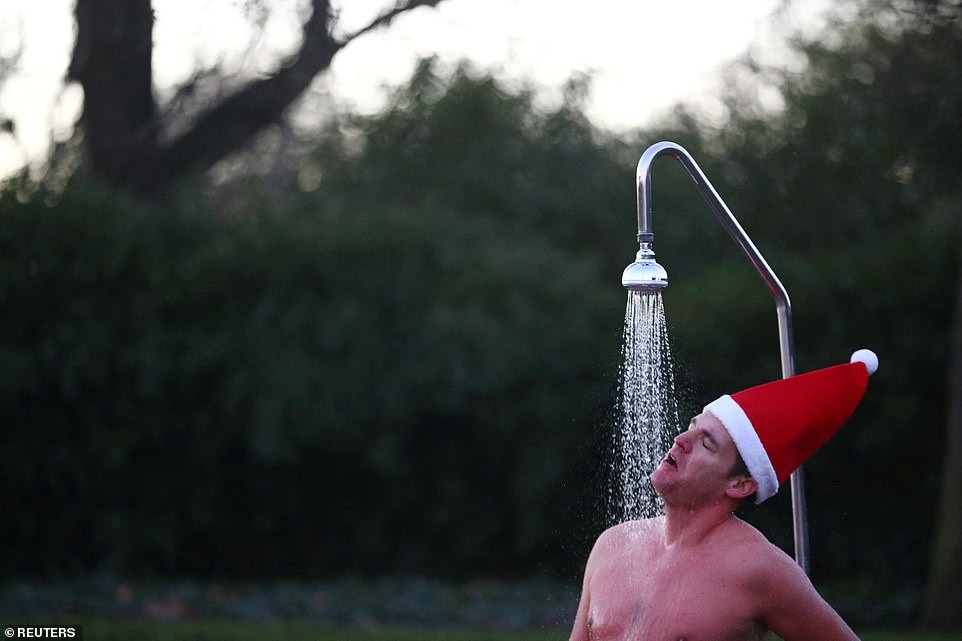 After swimming, this man used the outdoor shower – whilst still wearing his Santa hat

On Thursday, the Environment Agency issued two severe flood warnings for the River Nene in Northamptonshire, indicating a risk to life.

Across England, a total of 111 flood warnings and 137 flood alerts, as well as the two severe flood warnings, remained in force at 5am on Christmas Day as huge amounts of water flowed through river catchments.

What counts as a white Christmas?

The Met Office defines a white Christmas as at least one flake of snow falling in a specific location during the 24 hours of December 25.

Snow does not need to settle on the ground.

Traditionally, the Met Office used a single location – its building in London – to define a white Christmas.

But in recent years, sites including Buckingham Palace, Belfast, Aberdeen, Edinburgh and the Millennium Stadium in Cardiff have been included.

The Met Office also looks at data from its observing stations around the UK to get a better idea of where snow has fallen or is lying on Christmas day.

Northamptonshire Police said the emergency services were working through the night to evacuate more than 1,000 people from the Billing Aquadrome holiday park in the county.

The force said the heavy rain had caused flooding with water up to 5ft deep in places.

Northamptonshire Search and Rescue were involved in the evacuations, which included a new mother and a young baby.

Emergency accommodation was sourced for the residents, some of whom showed signs of hypothermia, at hotels and at least two leisure centres.

Police Chief Superintendent Mick Stamper said it was an ‘exceptionally challenging situation’ and asked residents to leave the site if they could, adding they would be exempt from Covid-19 travel restrictions.

Properties in various parts of the country, including East Anglia and Gloucester, were also flooded as there was up to two inches of rainfall in some areas.

The Met Office said conditions across the UK will turn increasingly unsettled through to December 27, with strong winds and heavy rain moving in from the north.

An amber national severe weather warning has been issued for parts of south Wales and across southern England, with gusts expected to reach up to 60-70mph in exposed coastal locations.

A yellow warning for wind for the whole of England and Wales as well as the far south of Scotland has also been issued and will be in force from 3pm on Boxing Day. 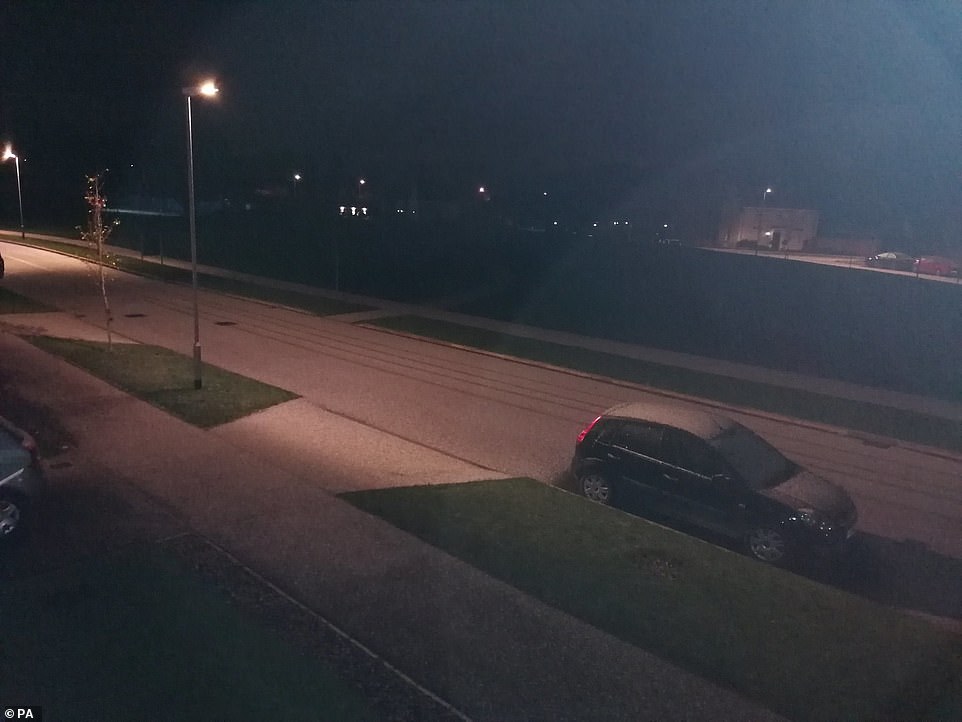 The last official white Christmas – defined as if a single snowflake falls during the 24 hours of Christmas Day, anywhere in the UK – was in 2017, when 11 per cent of weather stations recorded snow falling. Pictured: Snow in Hessle this morning 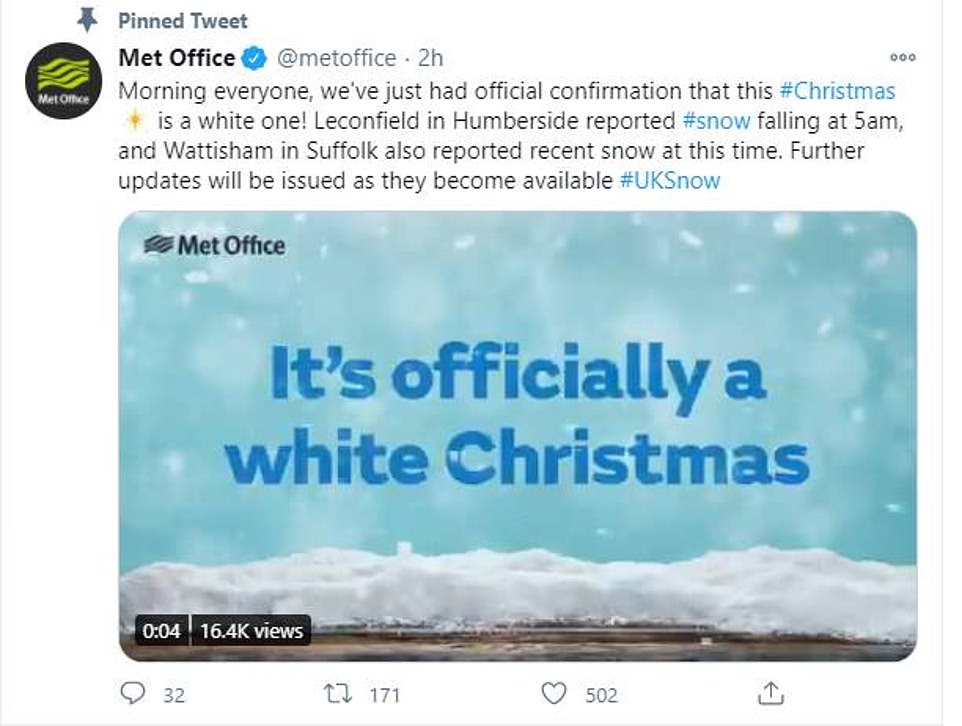 The Met Office tweeted: ‘Morning everyone, we’ve just had official confirmation that this #Christmas is a white one! Leconfield in Humberside reported #snow falling at 5am, and Wattisham in Suffolk also reported recent snow at this time’ 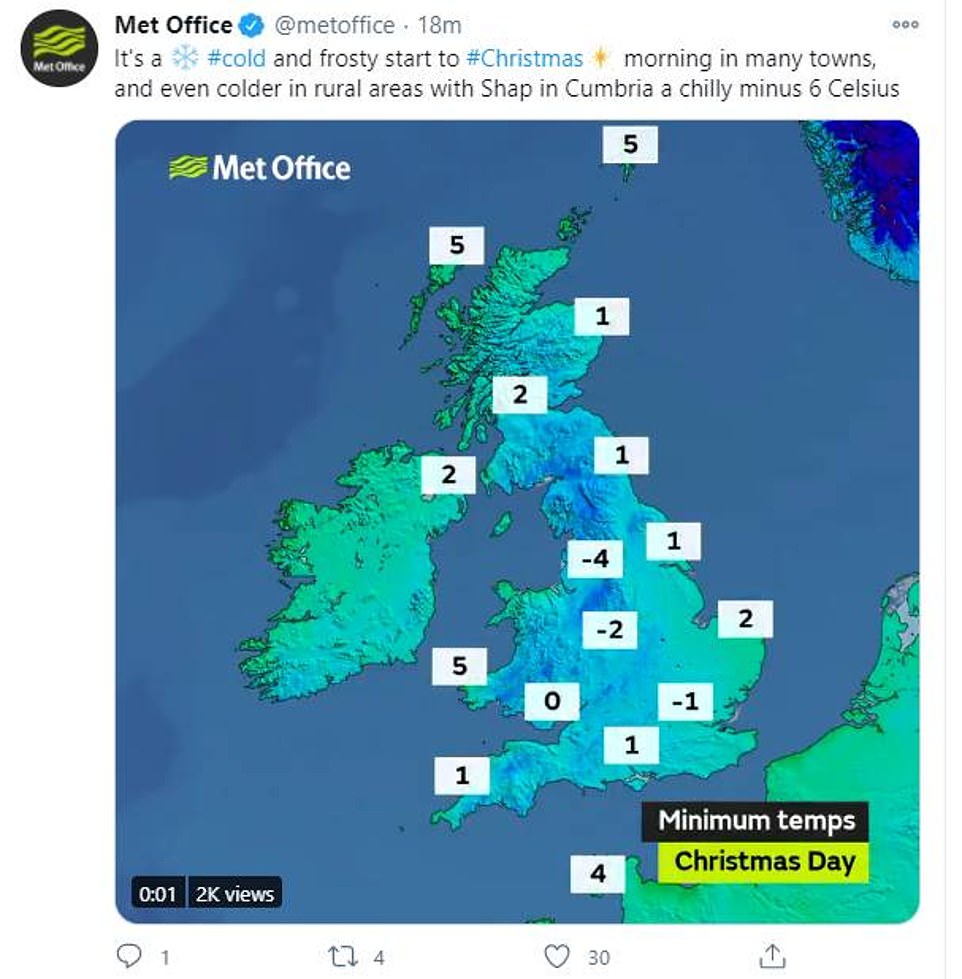 ‘An amber wind warning is in force through Boxing Day night in southern and south-western parts of Wales and southern parts of England.

‘We could see gusts of 60 to 80mph. Through Boxing Day, first of all it is the rain we are most concerned about.

‘Heavy bouts of rain coming in across western Scotland, a rain warning here, the risk of localised flooding, with the highest rainfall totals over the higher ground.’

Speaking of wind, she added: ‘We have got a broad yellow warning anywhere from southern Scotland southwards and again, gusts inland could reach 50mph.

‘Along the coast, 60-70mph. An amber warning. In the south, gusts could reach in excess of 70mph. So some dangerous conditions outside. 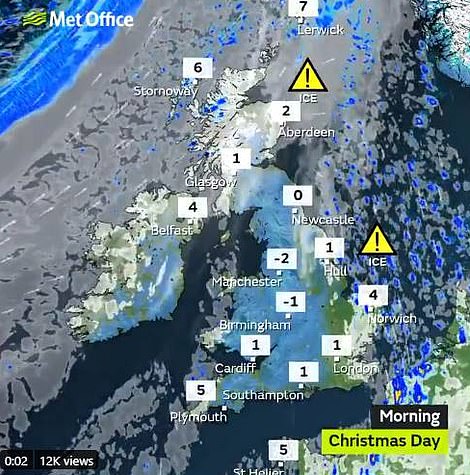 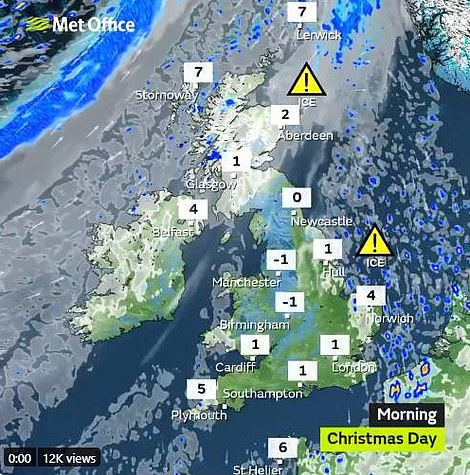 A graphic also showed the weather across the UK this morning, as ice warnings were issued in parts of the country

‘You can see the rain relentless, driven in on that strong wind from the south-west through Boxing Day – a really really wet day to come across these parts.

‘Wet weather extends towards Northern Ireland. The rain then becomes a bit more persistent across northern counties of England later.

‘Patchy rain and cloud further south but notice the winds will pick up some strength later on. It is really Boxing Day night where will see the most significant wind strength. They will be damaging.’

The last time Britons saw a widespread white Christmas was in 2010. There was snow on the ground at 83 per cent of weather stations – the highest amount ever recorded. 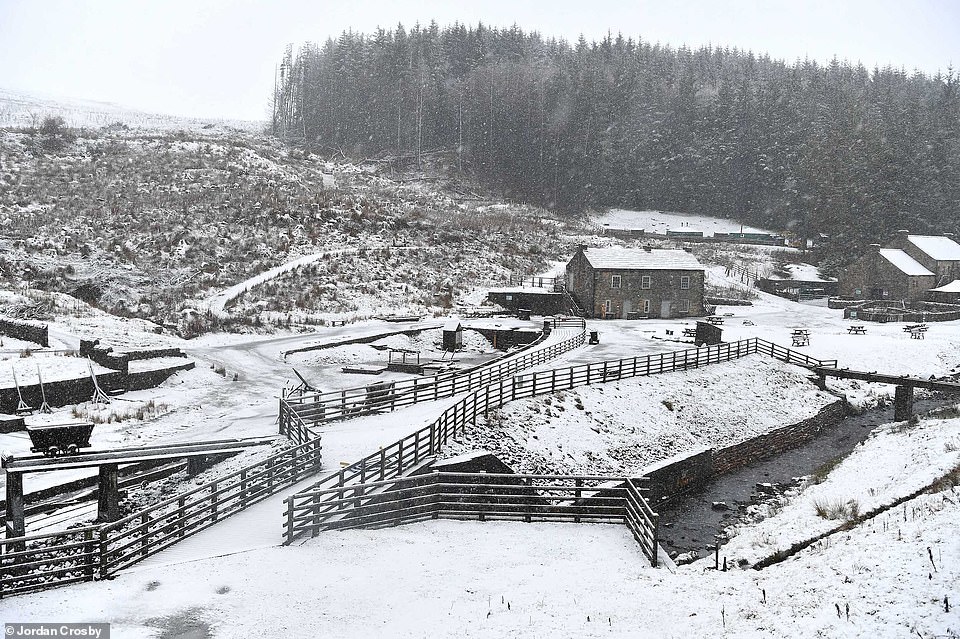 On Thursday, Britons in the North of England woke up to heavy snow. Pictured: The scene in Lanehead, County Durham, yesterday