Snow fell across large parts of Europe on Tuesday as the continent remained in the grip of cold weather despite it being the first official day of spring.

The Spanish islands of Menorca and Majorca saw a dusting of flakes as seven regions across the north of the country were put under snow and ice warnings and dozens of schools were closed in Catalonia.

Snow also fell across the majority of Germany with Berlin particularly badly affected. Temperatures in the city were not set to rise above 3C.

In Croatia, melting snow and ice has caused record flooding around the capital Zagreb while flakes continue to fall further to the east.

According to authorities, the Sava river had reached record water levels, surpassing the previous record by four inches.

The flooding has meant that residents are refusing to leave their properties, resulting in supplies being taken to them by emergency crews.

Snow fell across large parts of Europe on Tuesday despite it being the first official day of spring. Spain was particularly badly affected, with snow and ice warnings in force for much of the north, including in Vitoria, in Basque country (pictured) 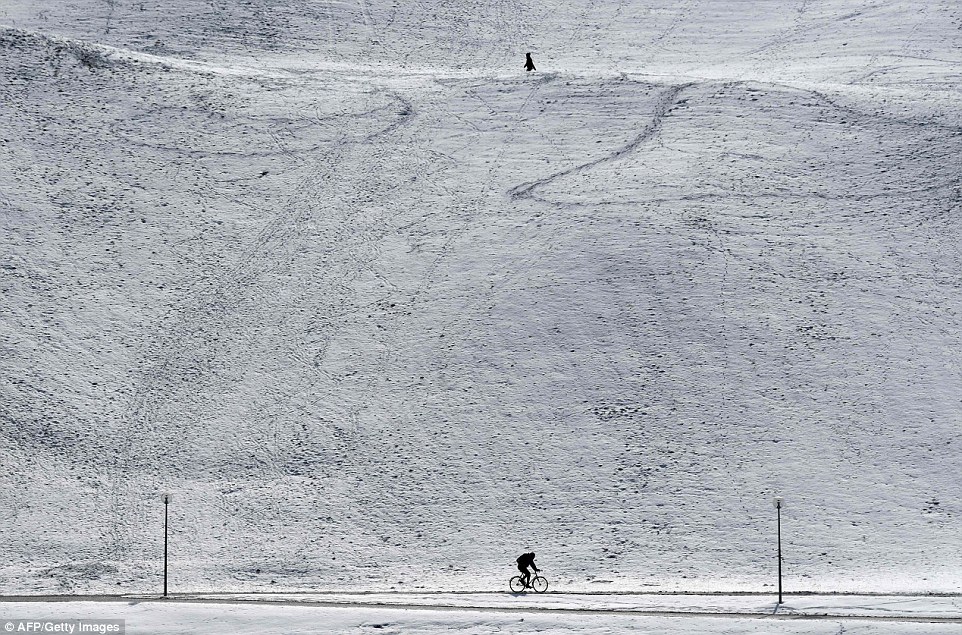 Winter also refused to loosen its grip on Germany, with snow falling across much of the country. In Munich, a cyclist and a pedestrian were photographed making their way through the Olympic Park 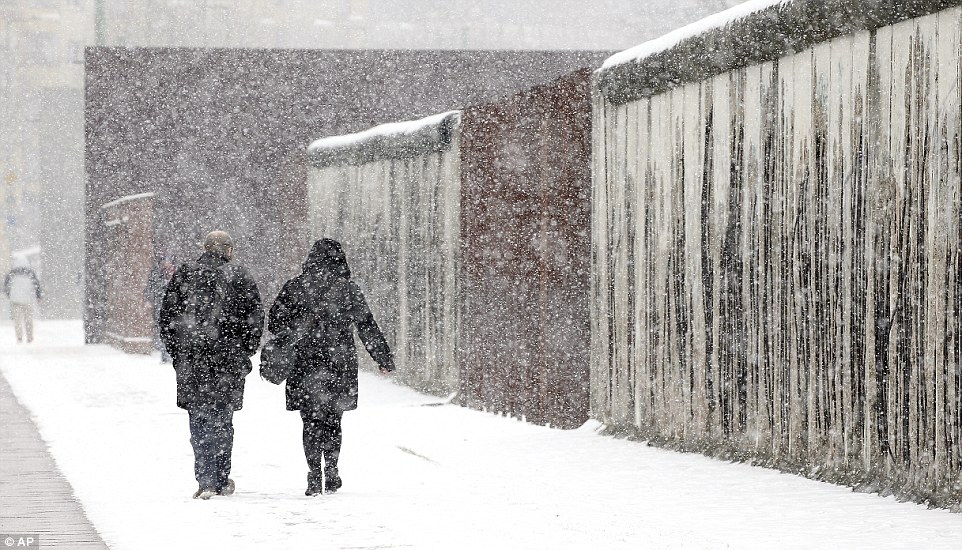 Berlin was particularly badly affected by the snow on Tuesday, with most of the city receiving a thick coating. Here a man and a woman walk alongside a section of the Berlin as the flakes fall A man makes his way through the ground of the Charlottenburg Palace, located in western Berlin, on Tuesday morning 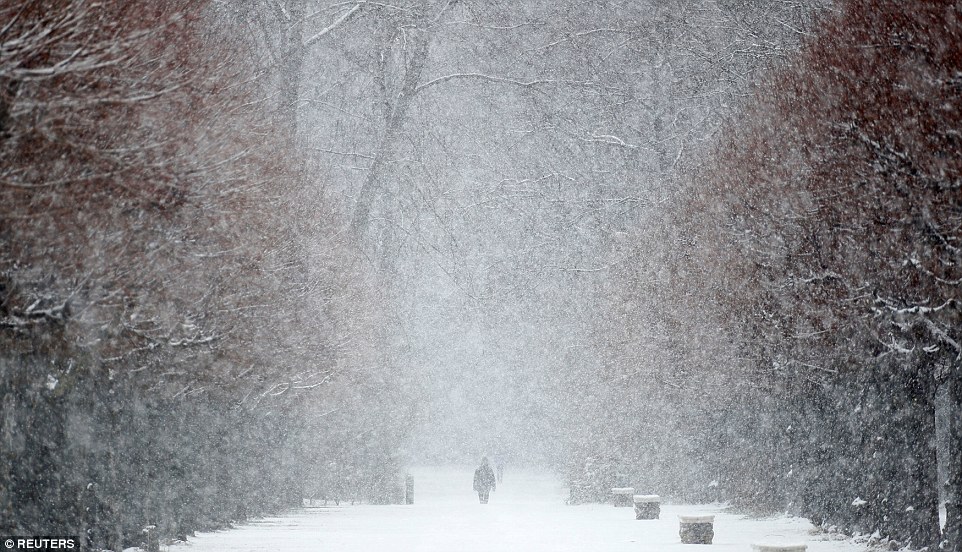 A person is seen walking among the snowfall in the grounds of the Charlottenburg Palace in Berlin, where temperatures were not expected to rise above 3C 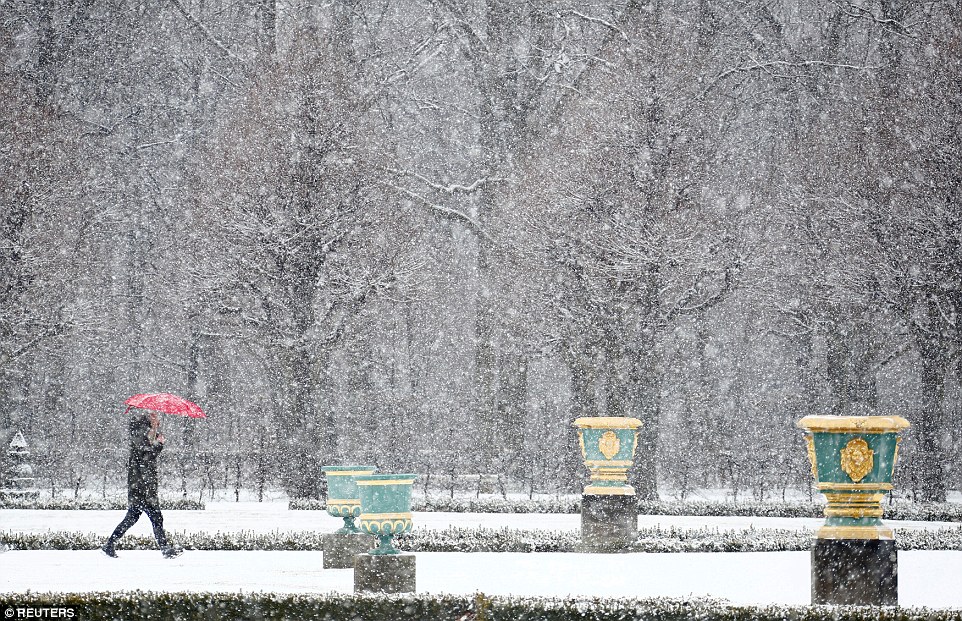 Blizzard-like conditions could be seen in Berlin, as a man with a red umbrella makes his way through the grounds of the Charlottenburg Palace Despite today being the official day of spring, snow continued to fall in Germany’s capital during a cold snap of weather 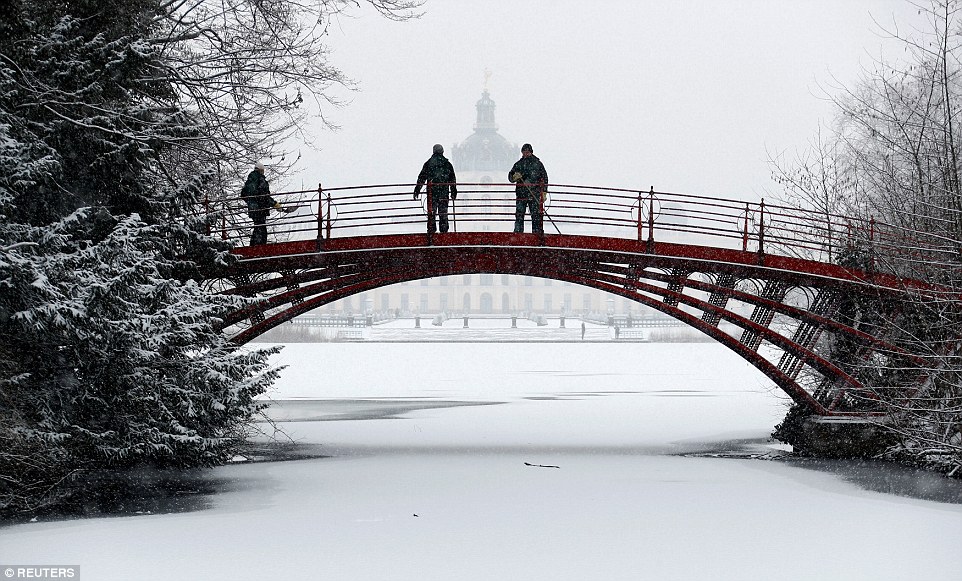 Workers clean a bridge during snowfall in the grounds of the Charlottenburg Palace in Berlin, Germany 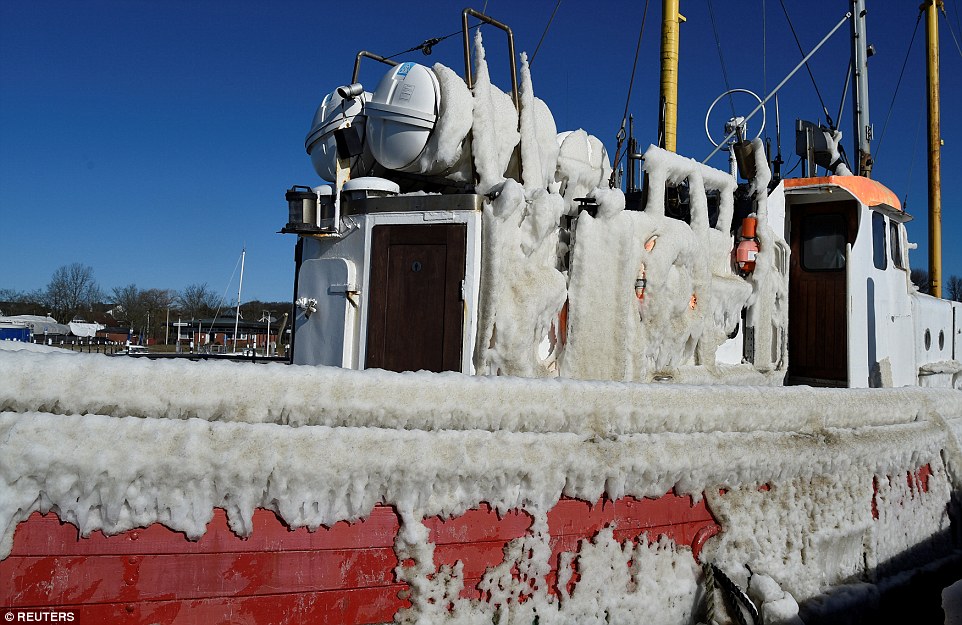 Ship “Nordland III” is covered with ice at the port of Strande at the Baltic Sea, Germany, following the plummeting temperatures 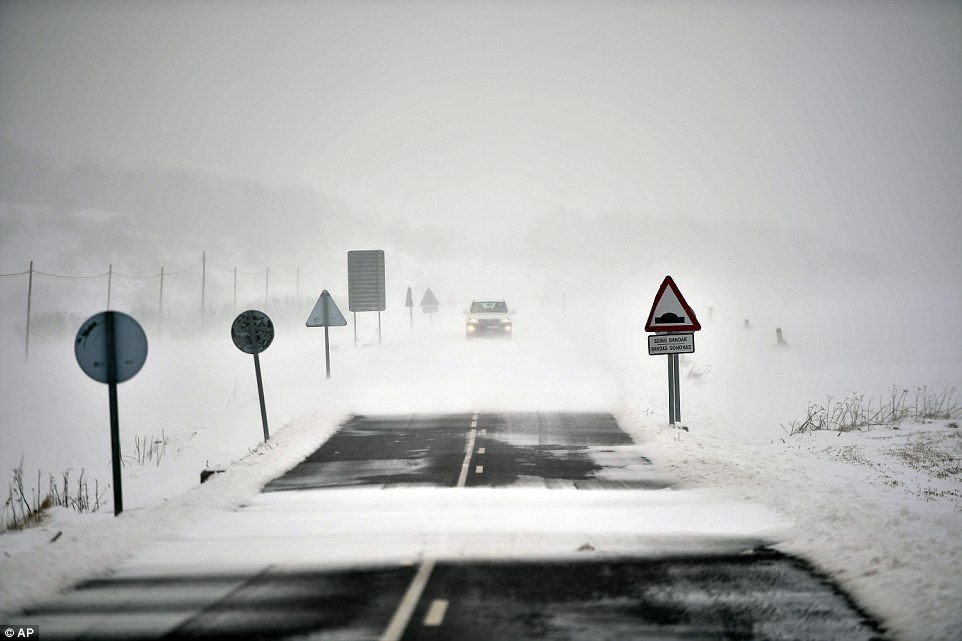 A car travels along a road covered by the snow near to Santa Cruz de Campezo, northern Spain, after the country was dusted with the white stuff 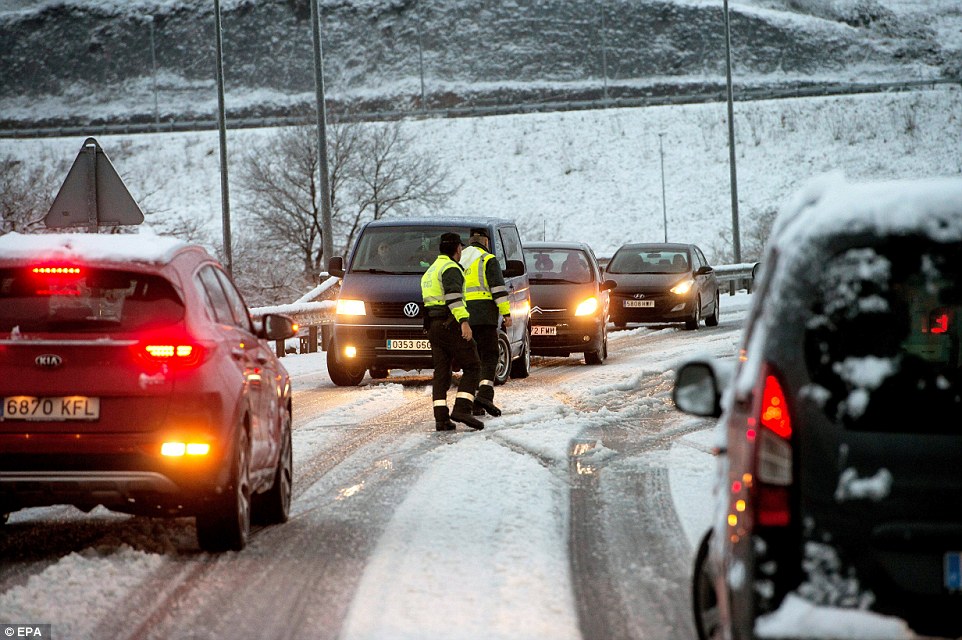 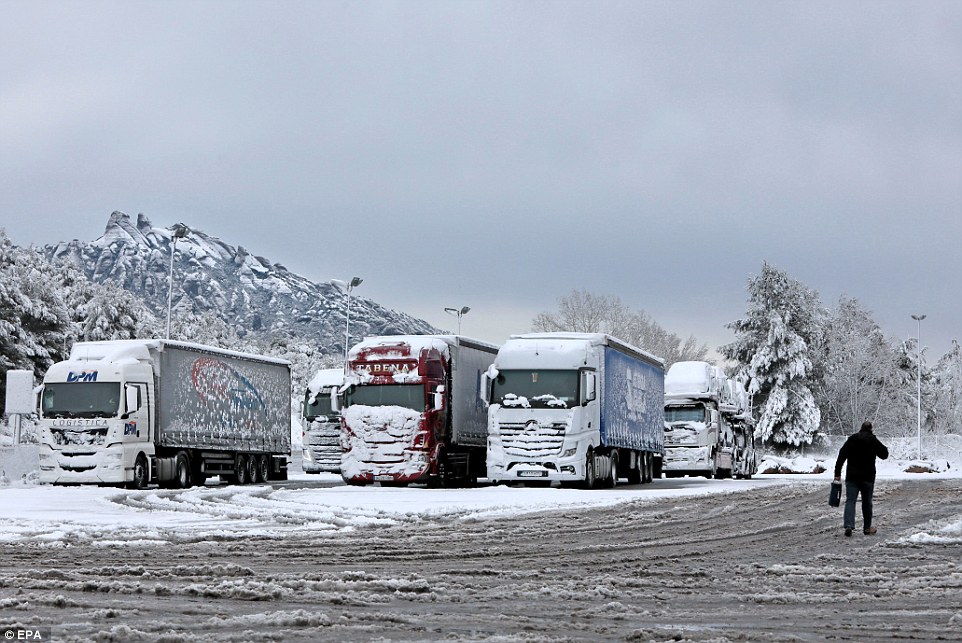 Trucks are detained at Coll del Bruc in Barcelona, Spain, 20 March 2018, as they wait for traffic to reestablish after a snowfall 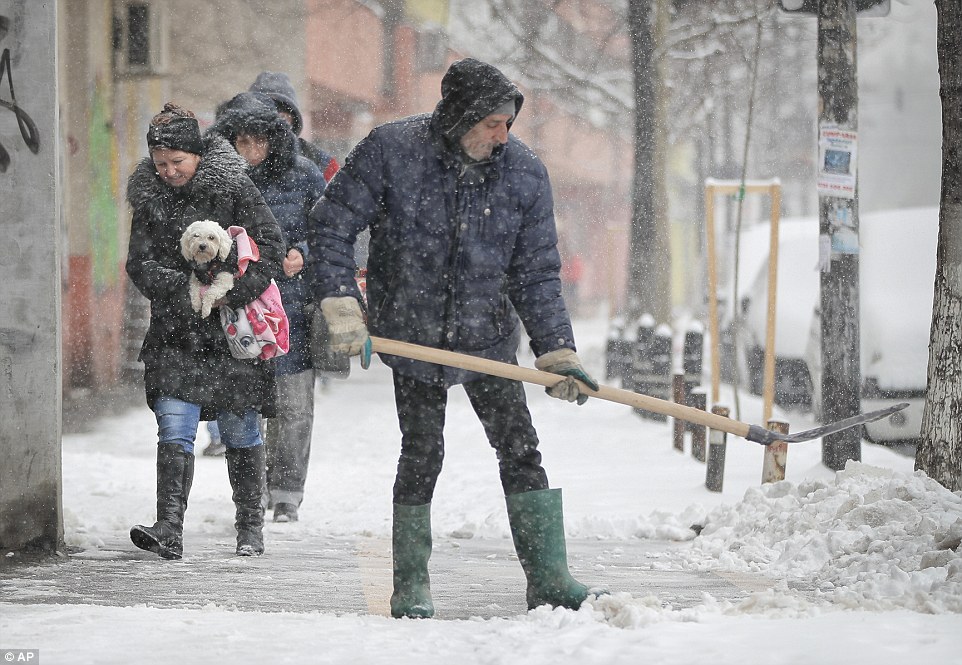 The Romanian capital of Bucharest was left under a covering of snow and ice, and thirty flights were delayed due to the cold conditions

Around 800 people in the Albanian village of Obot were left cut off from the rest of the country thanks to flooding that was also caused by melting snow.

In the past two weeks the villages of Shirq and Mushan were also left isolated after the Bojana river overflowed.

In Diber, Kukes and Elbasan, landslides have been reported, with roads becoming inaccessible but no deaths or injuries reported.

Around 7,400 acres of northwest Albania are flooded, according to the defense ministry and local authorities, with 225 homes waterlogged in the countryside.

But further to the east it was a different story as the Romanian capital of Bucharest was left under a covering of snow and ice.

According to the airport spokesman in Romania, Valentin Iordache, there were 30 flight delays on Monday morning because of the cold snap. Icicles hang from stones over an stream in Pillnitz park in Dresden, Germany, after temperatures plummeted in Europe 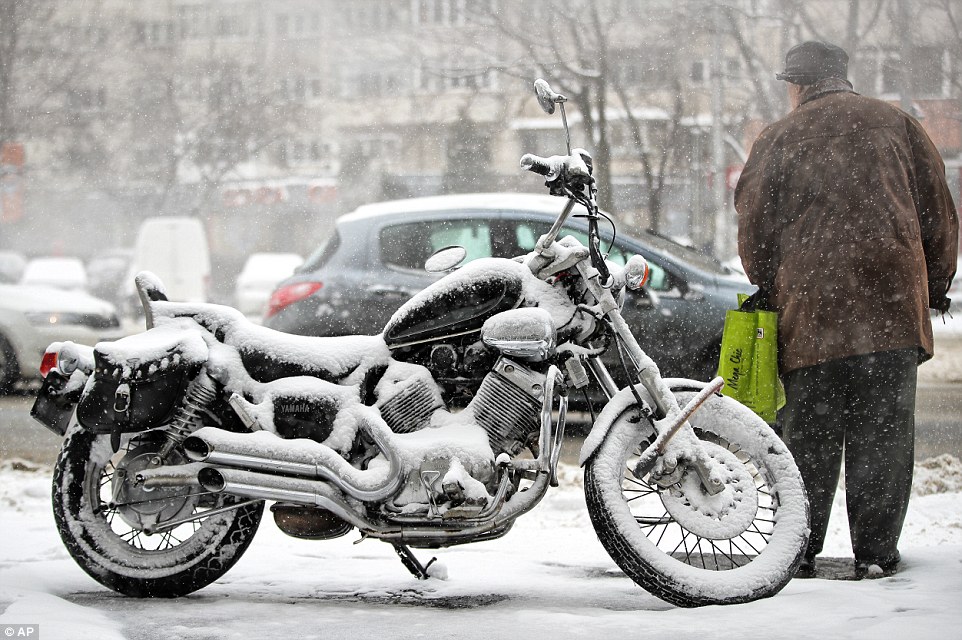 A man stands next to a snow covered motorcycle in Bucharest, Romania, where the city has been pelted with cold conditions 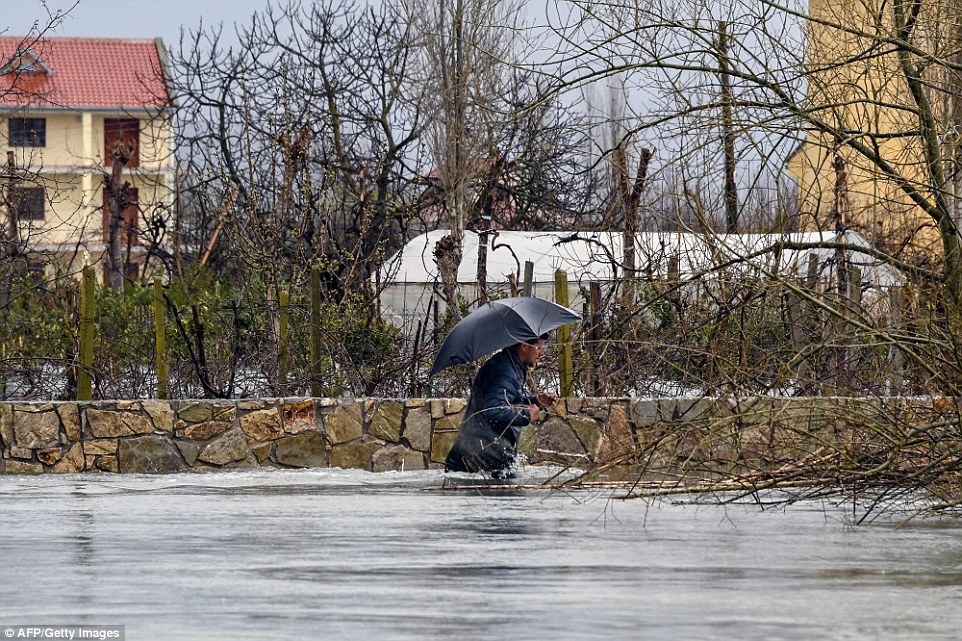 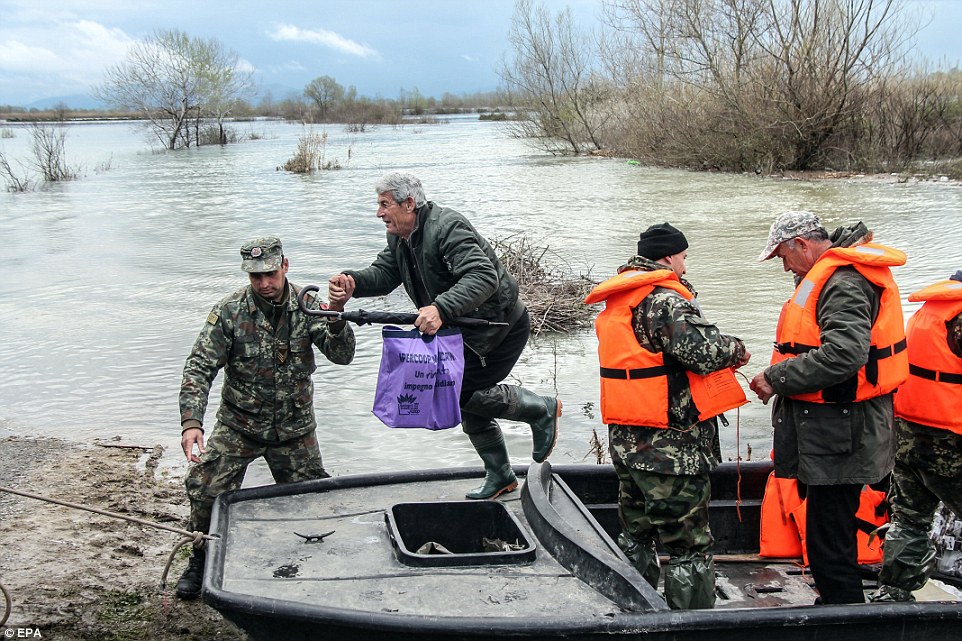 A man is evacuated by Albanian army forces from his home in Obot village near Shkoder, Albania, following the flooding 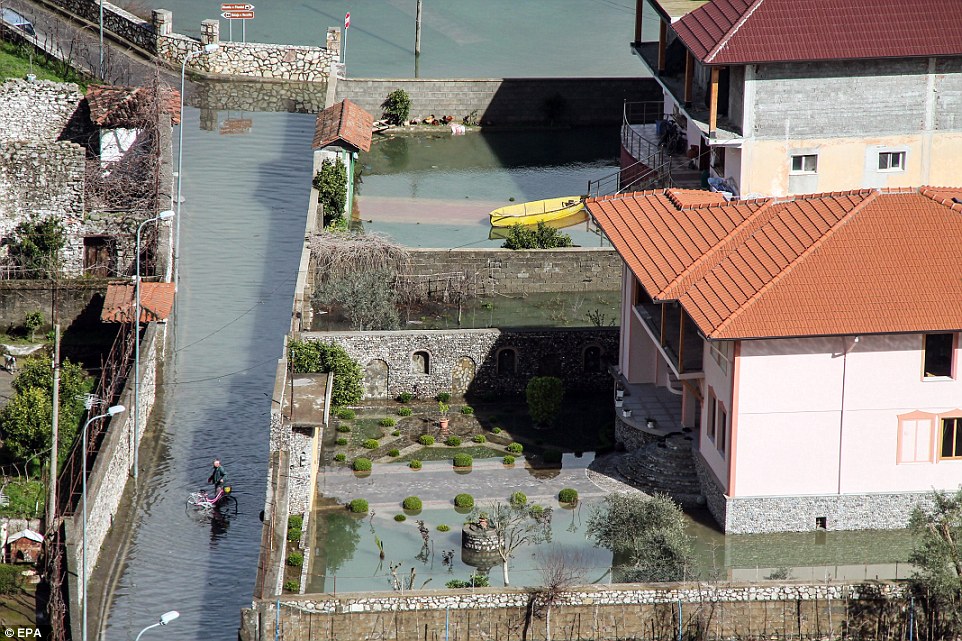 An Albanian man rides on his bicycle in the flooded roads of Ajazem village near Shkoder, after the country was hit by heavy rainfall and melting snow 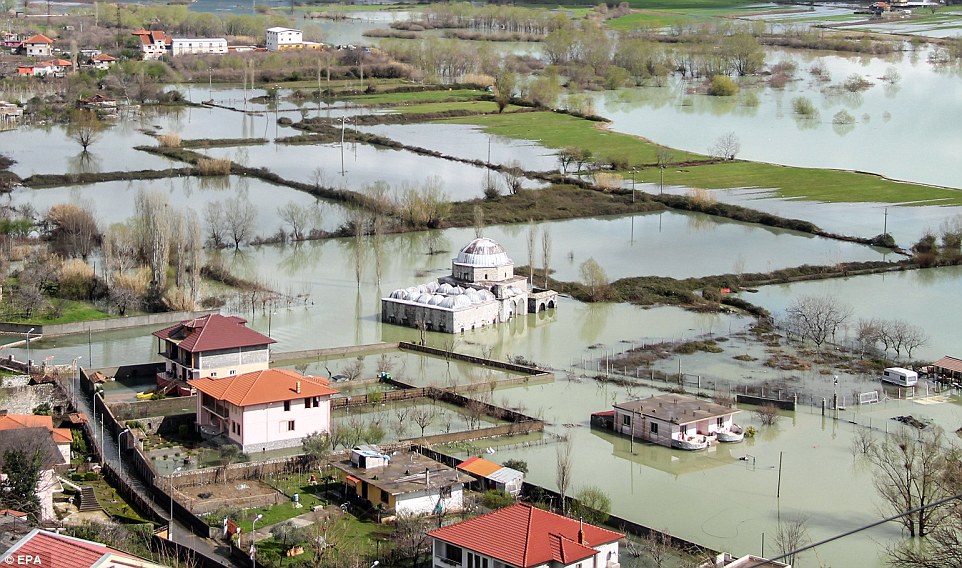 After flooding in Albania, a mosque can be seen submerged by water near Shkoder, alongside other waterlogged properties 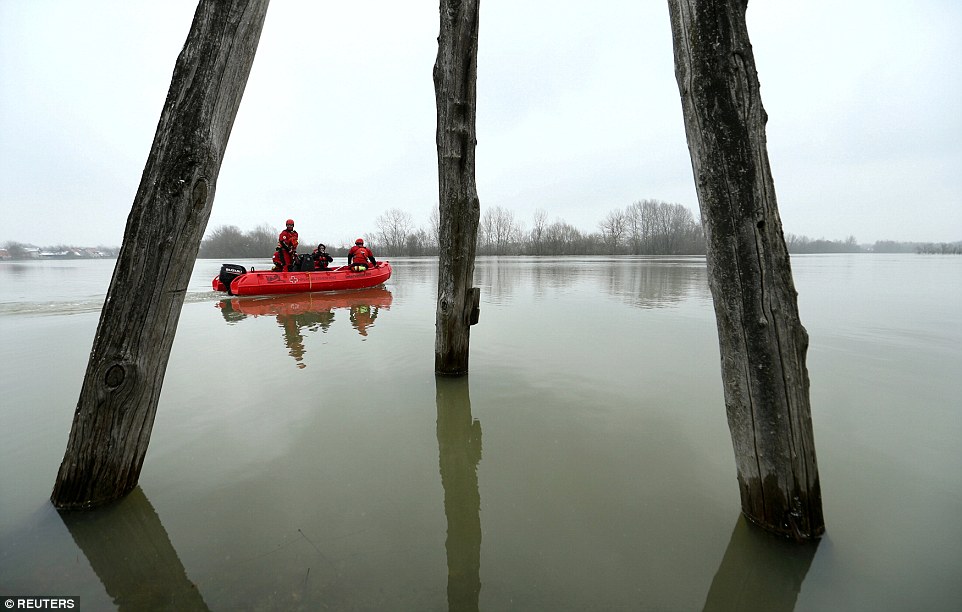 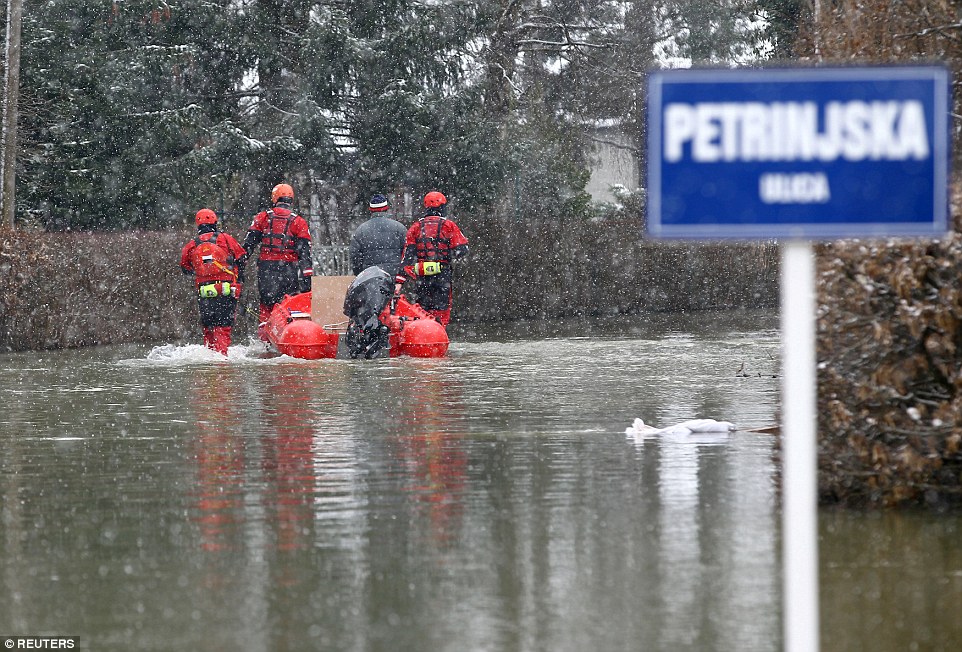 In Croatia, melting snow and ice has caused record flooding around the capital Zagreb while flakes continue to fall further to the east (pictured: Flooding in Zazina)