Spain starlet who’s lighting up the Euros but can’t drive yet! Pedri is the humble hero

‘Look at him, he’s a millionaire and he doesn’t even know it yet.’

Those were the words of Pepe Mel, coach of Spanish second division side Las Palmas, talking to his vice-president while watching a 16-year-old Pedri at a pre-season camp in Marbella two years ago.

Pedri had not played a first-team game, but Mel had seen enough in a couple of sessions to know what lay ahead. Recognising Pedri’s quality never seems to take long.

‘What a talent, remind me how old he is,’ tweeted Gary Lineker after the Spain midfielder became the youngest player to appear in a knockout game at the Euros.

Tomorrow night he faces Italy in his 62nd game of the season. ‘He’s always full of energy, even when he’s playing table tennis — which he is very good at, by the way,’ says Luis Enrique, the coach who has picked him for every match so far.

After former West Brom boss Mel’s prophetic comment in 2019, Barcelona signed the teenager for an initial £4.3million, immediately loaning him back to Las Palmas.

At the end of that campaign, Mel was asked if he thought he might get to keep him for a second season. ‘We hope so,’ he said. ‘But if I was Barcelona coach, I wouldn’t let us.’

Ronald Koeman took heed. ‘Who is the kid in midfield?’ he asked his coaches in pre-season before immediately cancelling Barca’s plans to loan Pedri out again.

By October he was starting matches and by November he was playing 90 minutes, scoring in his first full game. At times it has been said that he needs a rest, but Koeman, Enrique and the player himself have not agreed. 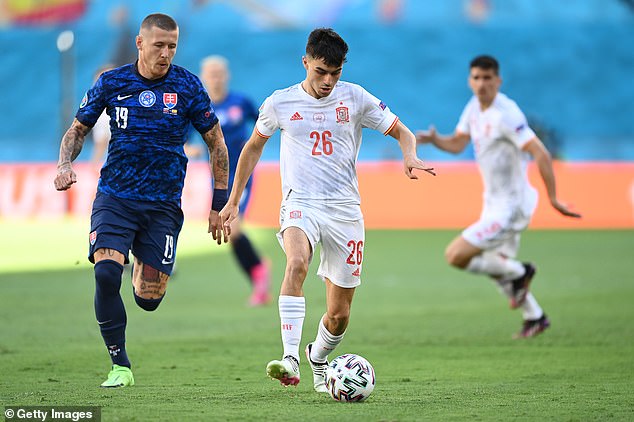 ‘I don’t get tired. The physical side is more mental than anything,’ Pedri says.

Concern over those 61 games played and the kicking he received in the matches against Sweden and Poland led to calls for the 18-year-old to be taken out of the starting XI.

They were also motivated by a reticence in the Spanish capital to get too enamoured with a young talent that Real Madrid had overlooked in the past.

When Las Palmas marked their 70th anniversary two years ago, they invited various football dignitaries to the celebrations and Real sent Emilio Butragueno. Mel — a former Madrid youth player — took the chance to tell the club about Pedri but they never took the gamble.

Pedri had already had a trial at Madrid but after watching him in a few snow-interrupted training sessions, they decided to pass.

‘It’s a jump in the dark when you gamble on a 16-year-old who has never played in the first team,’ says Mel. ‘Barcelona took that risk.’

Not only was Pedri one of Barca’s best players last season, but his emergence was one of the reasons Lionel Messi decided to stay.

He was not yet two years old when Messi made his debut but the two are now in the same team and on the same wavelength on the pitch. Pedri has been likened to another midfielder Messi loved playing alongside, Andres Iniesta.

Mel says it’s unfair to liken the youngster to arguably the most important player in Spain’s history. But it’s hard not to get carried away and in the next breath he adds: ‘He reminds me more of Xavi, the way he protects the ball so well in possession.’ 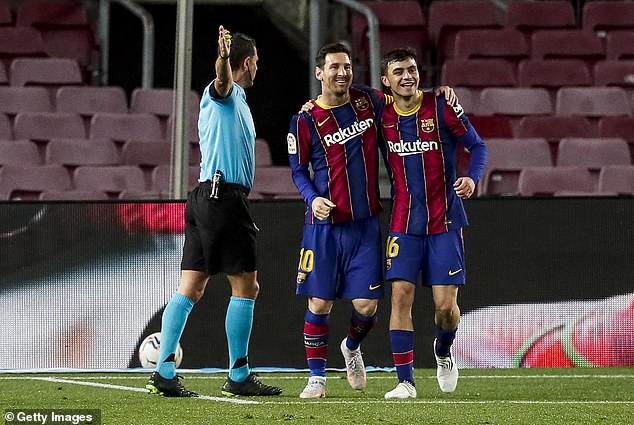 Albert Benaiges, the Barca scout who discovered Iniesta, says: ‘Technically Pedri is very good and he works hard. In that sense, he is a lot like Andres. And they are alike as people, the way they get along with team-mates.’

Those off-the-pitch similarities are striking. Pedri caused a stir last season when he was spotted jumping in a taxi to go home after one of Barcelona’s league games.

How could it be, asked fans, that this brilliant young talent doesn’t get a private car? But that was just Pedri being normal. He turns up for games with his clothes in a carrier bag and goes home in a cab.

As Alvaro Morata commented earlier in the tournament: ‘We said to him the other day, “It’s incredible. You’re playing a Euros before learning to drive”.’

Pedri can worry about lessons when his season ends, if indeed it ever does. He’s been called up for the Olympics and could play on until August 7, a week before the new La Liga term starts.

First, though, comes the Euros semi-final. Italy will know the threat he carries. With his socks at half-mast covering what look like a pair of inadequate shin-pads, he’ll be a moving target once more.

Silvan Widmer’s cynical knee in the back towards the end of the first half slowed him down against the Swiss, but he recovered and was pinging passes until he was taken off a minute before the end of extra-time. That seemed to be the first time Enrique had tried to shield him, sparing him the penalty shootout. Perhaps it’s not Pedri who needs protecting, but the teams he faces.