By Will Stewart And Harry Howard For Mailonline

A ‘spider granny’ was rescued when she hung upside down from a fourth floor window after accidentally falling out.

She survived by a ‘miracle’ after her ankle wedged between the swing window and the ledge some 50 ft above the ground in Yetkul in the Russian region of Chelyabinsk.

She was standing on the windowsill to clean her windows when she became unbalanced and fell, it is believed. 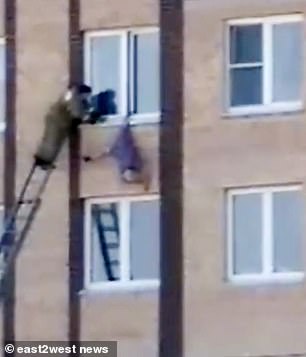 Video footage shows a rescuer using a ladder to reach an old woman who fell out of a fourth-floor window, in Yetkul in the Russian region of Chelyabinsk. The woman fell after standing on the ledge to try to clean her windows

Video footage shows a rescuer using a fire ladder to reach the ‘terrified’ woman, who was so shocked she could not speak.

She was hanging head-down ‘for at least 15 minutes’.

The man tried to encourage her to stay calm while his colleagues broke into her flat to pull her back to safety through the window.

‘She was like a spider granny hanging from the window,’ said one report.

‘A school director in her office saw the woman hanging upside down out of the window,’ said the local Emergencies Ministry.

‘She called the head of the fire brigade, and they had to really wrack their brains on how to rescue her.’ 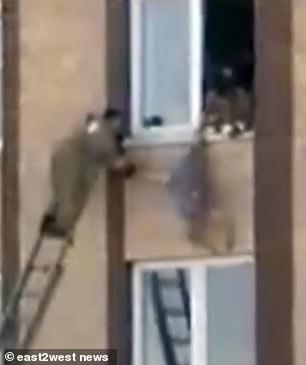 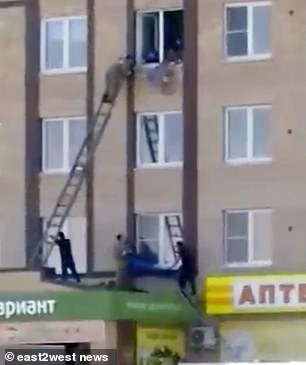 She was hanging head-down ‘for at least 15 minutes’. The man tried to encourage her to stay calm while his colleagues broke into her flat to pull her back to safety through the window

The spokesman said: ‘She was conscious when the first firemen got to her.

‘But from deep shock she couldn’t explain her flat number so they knew where to go to rescue her.

‘She was in state of deep panic.

‘While they were figuring out the flat number, one of the team members stayed (on the ladder) talking to her, saying that she would be all right.’ 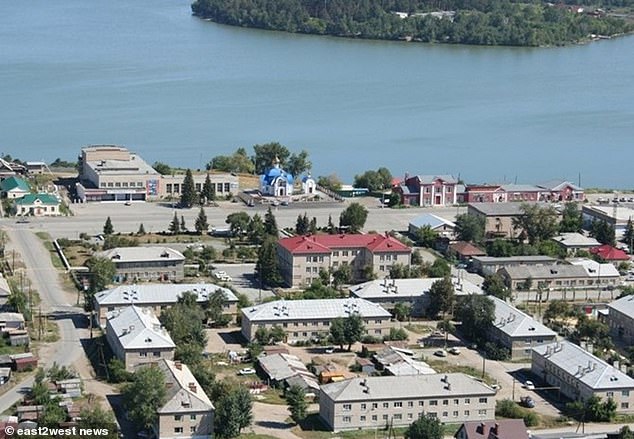 The accident happened in Yetkul (pictured)  in the Russian region of Chelyabinsk, west-central Russia

Meanwhile other rescuers held a blanket underneath in case she fell.

The spokesman said firemen believed she had been ‘cleaning her windows’ when she fell.

‘Both window flaps were open, and when she started to fall she pulled one of the flaps so that it clamped on her ankle.

‘This is what saved her.

‘The firemen had to show a lot of skill in pulling her up as in order to grab her leg they had to open that exact window that held her.’

The woman, unnamed but believed to be in her 60s, was rushed too hospital.