The world is gazing at the skies tonight as a partial lunar eclipse makes the Moon appear red in the sky – 50 years to the day since the launch of Apollo 11.

Stargazers in Britain gathered on London’s Primrose Hill to see the ‘half-blood Moon’ – a full Moon partially hidden by Earth’s shadow – above the landmarks of the capital on Tuesday night.

Elsewhere in Europe there were spectacular views in the skies of Austria, France and Greece, where a fuller Moon hung above the ancient Temple of Poseidon.

A lunar eclipse occurs when the Earth, Sun, and Moon are almost exactly in line and the Moon is on the opposite side of the Earth from the Sun.

As the Moon moves into Earth’s shadow, it is illuminated by a small amount of sunlight that passes through our atmosphere – producing the unusual red colour.

Tonight’s eclipse is particularly well-timed as the Moon is on the public mind anyway, half a century exactly since Neil Armstrong and Buzz Aldrin began their historic journey to the lunar surface.

PRIMROSE HILL, LONDON, UK: The red half-blood moon appears over the London skyline, including landmarks such as The Shard, as seen from Primrose Hill – one of the best vantage points over the capital – on Tuesday evening 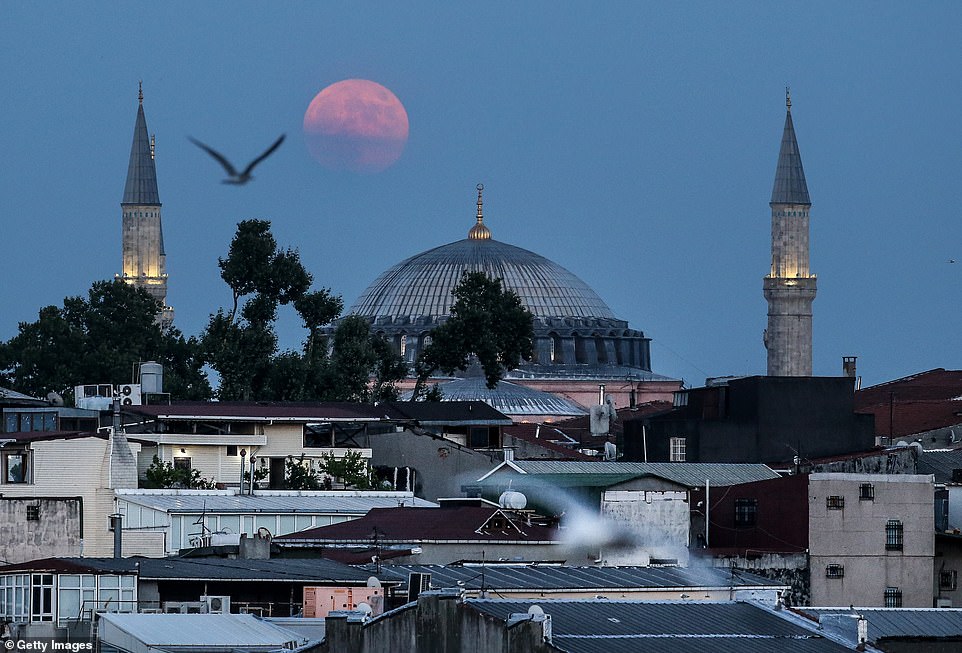 ISTANBUL, TURKEY: The full red Moon is seen over the Hagia Sophia – a centuries-old building that was once a Greek Orthodox cathedral, then a mosque – in Turkey’s largest city on Tuesday night 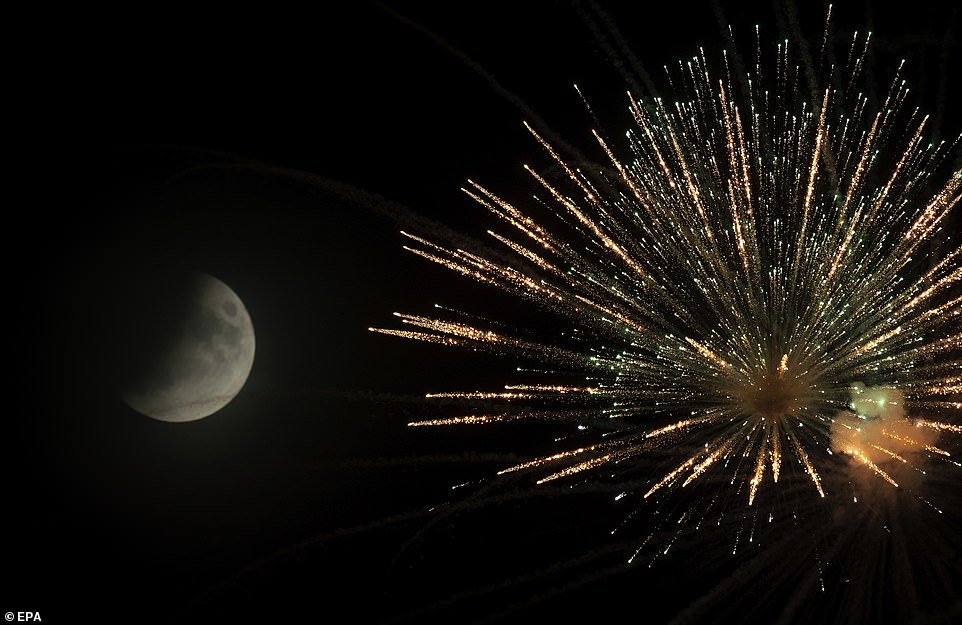 SPEYER, GERMANY: A partial lunar eclipse rise during a firework at the Brezel festival in Germany on Tuesday night 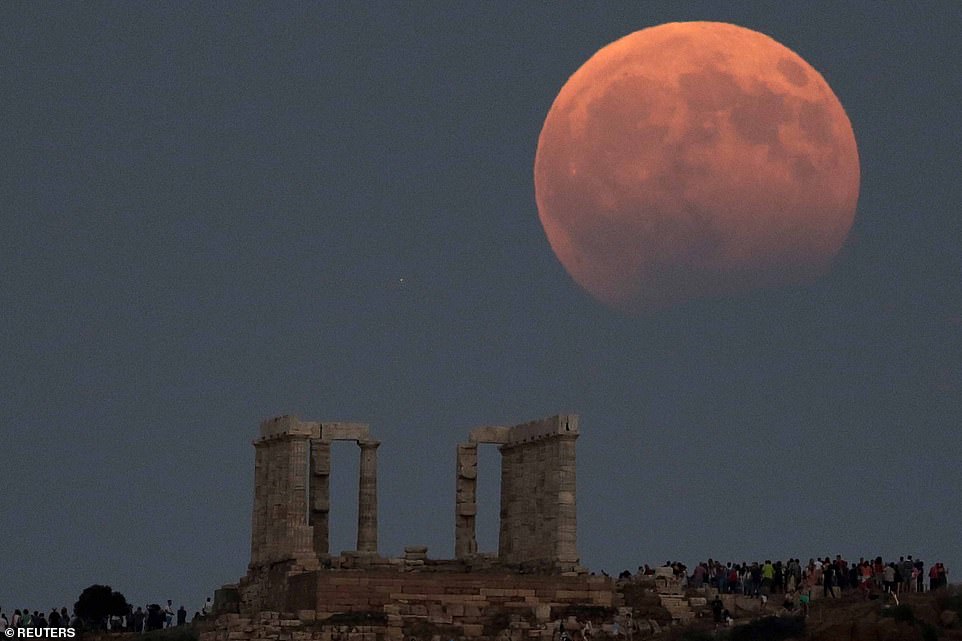 CAPE SOUNION, GREECE: The moon appears huge and red in the sky, partially covered by the Earth’s shadow, above the ancient Temple of Poseidon in Cape Sounion, east of Athens in Greece 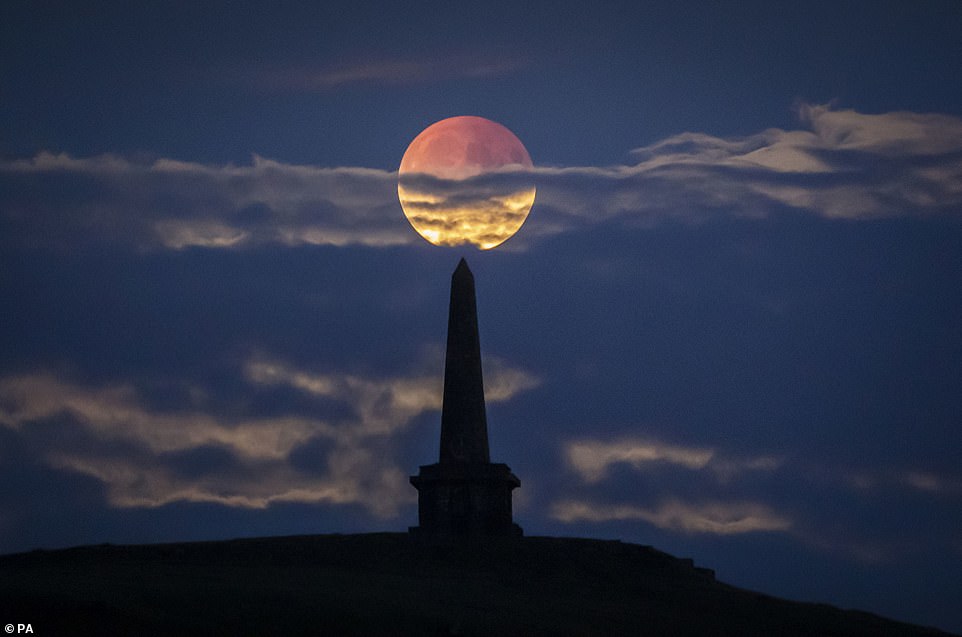 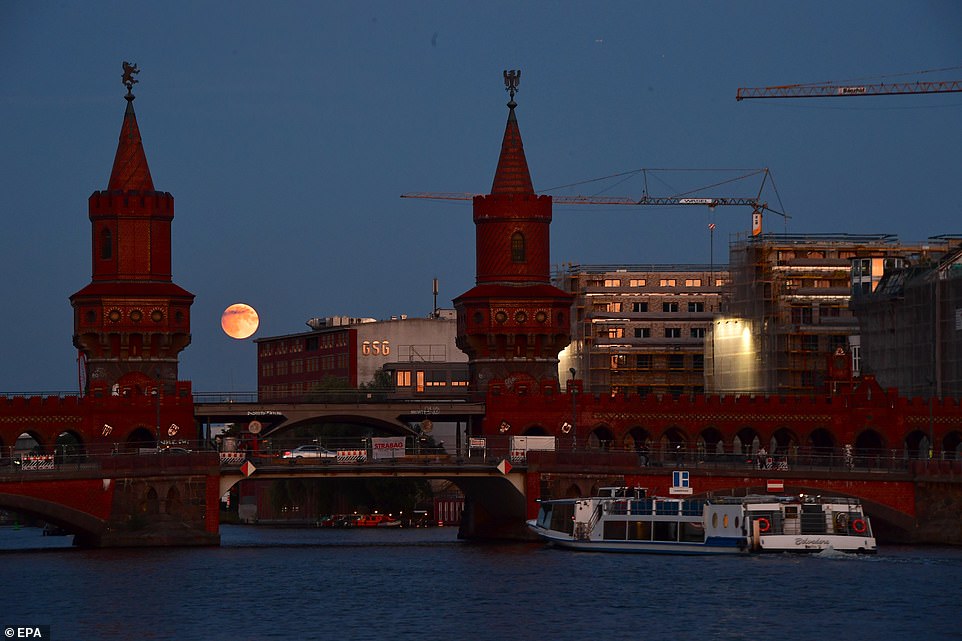 BERLIN, GERMANY: The red-coloured Moon hangs in the sky above the double-decker Oberbaumbrücke, one of the landmarks of the German capital 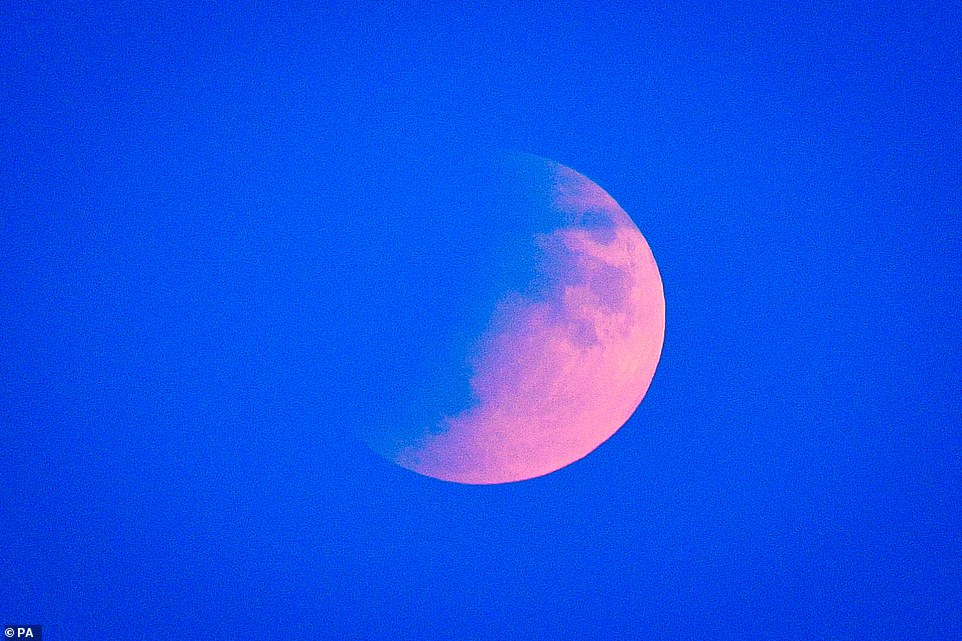 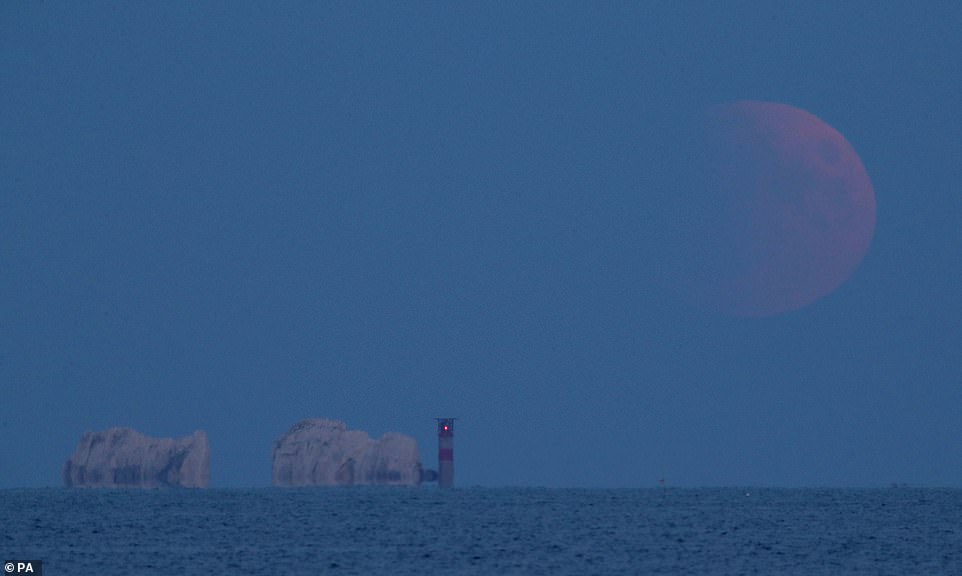 MUDEFORD, DORSET, UK: The Moon over the Needles as seen from Avon beach in Mudeford, Dorset, on Tuesday night 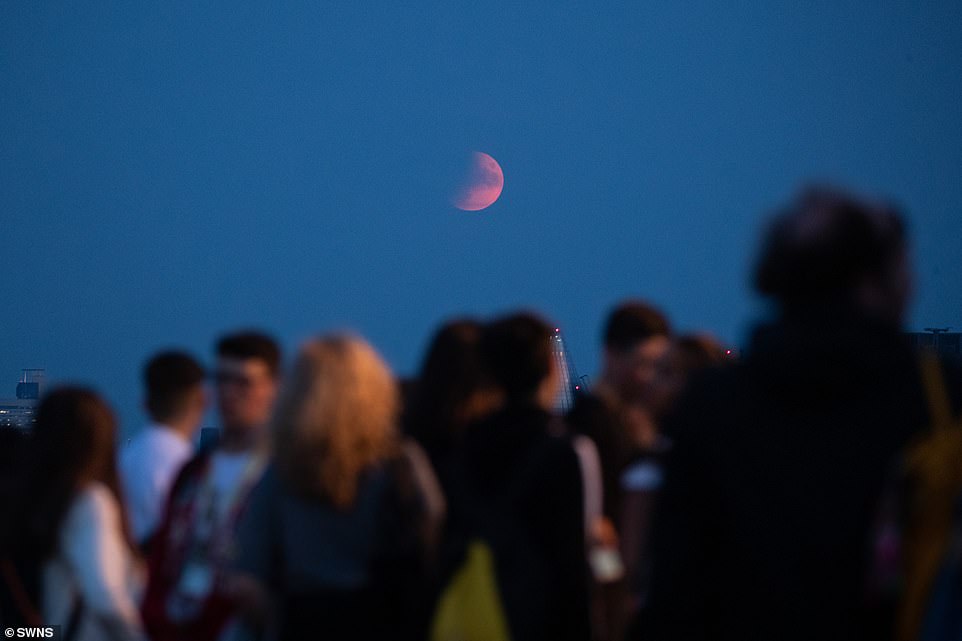 PRIMROSE HILL, LONDON, UK: Stargazers gather at the London park to watch the eclipse above the skyline tonight 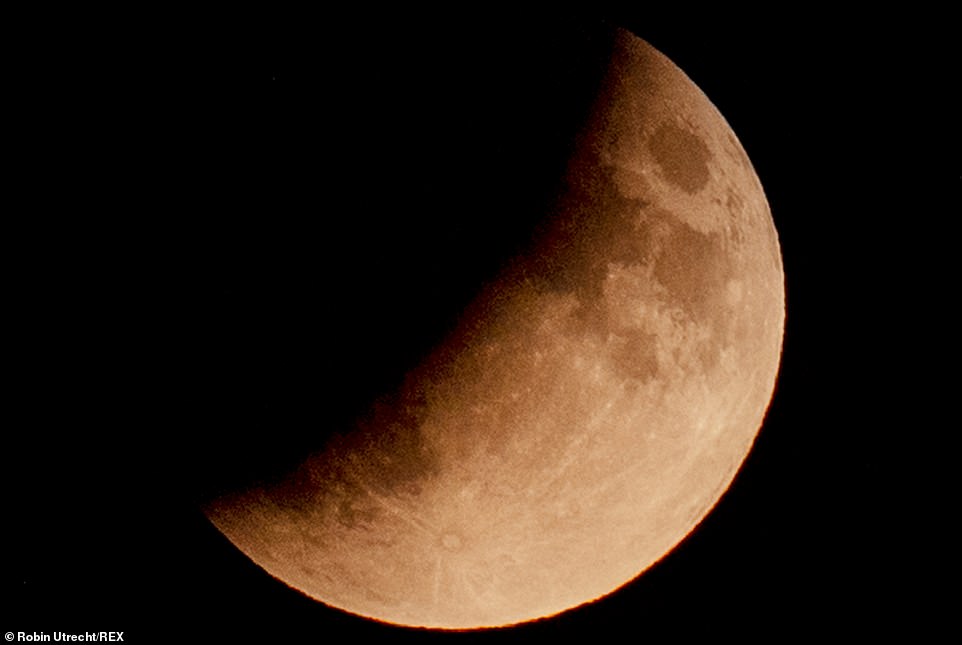 ARNHEM, NETHERLANDS: The Moon appears more brown and orange in this picture taken in the Dutch city 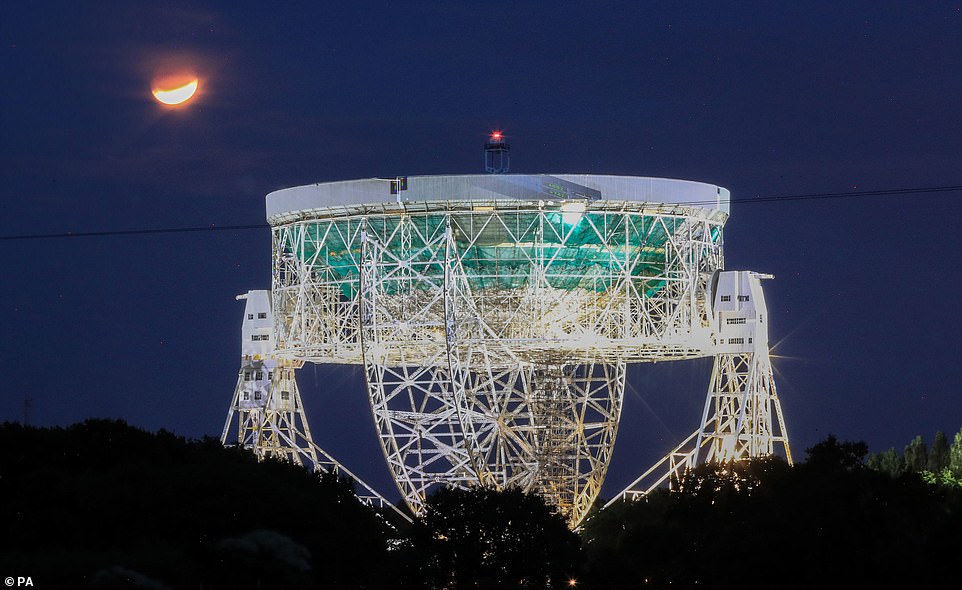 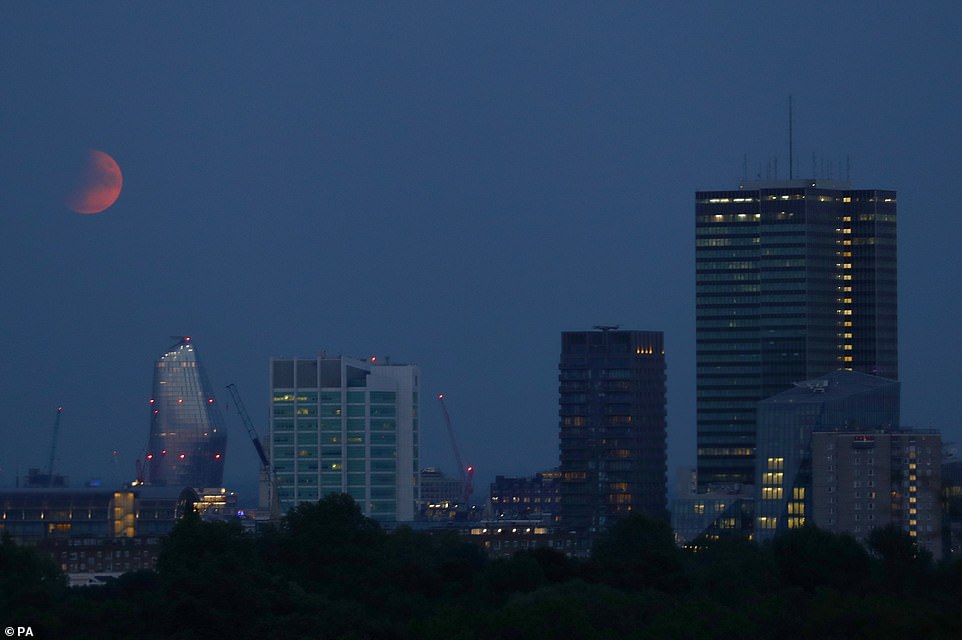 PRIMROSE HILL, LONDON, UK: The Moon hangs above the lights and towers of London at the peak of the partial eclipse 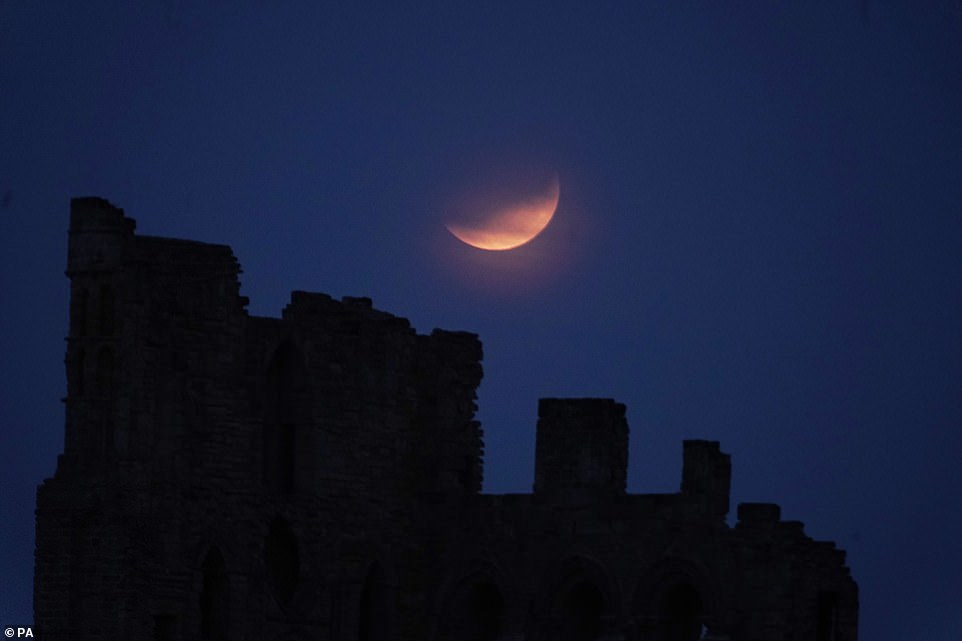 TYNEMOUTH PRIORY, UK: Part of the Moon is visible above the medieval ruins of Tynemouth Priory in north-east England 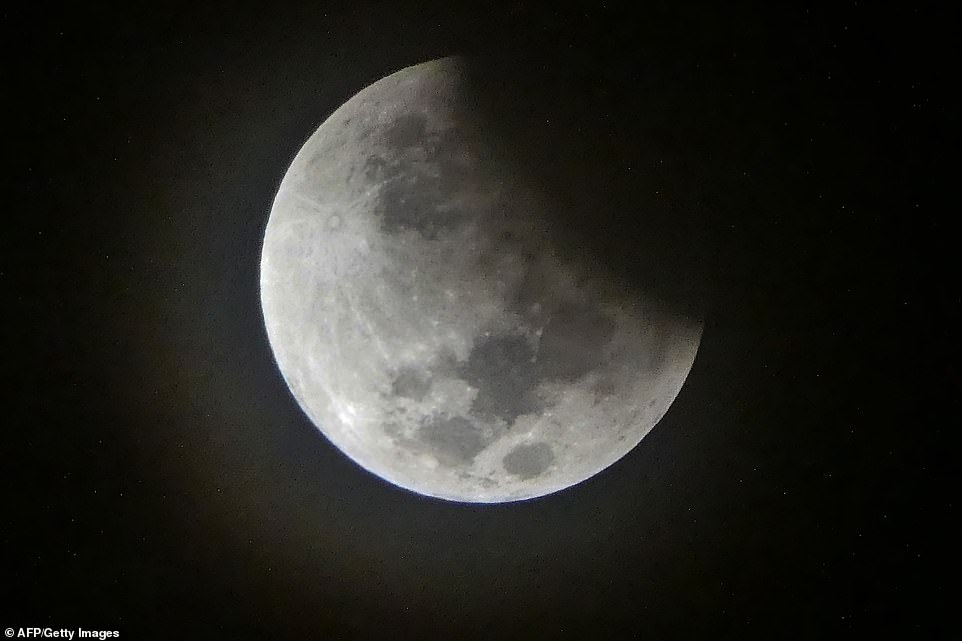 JAKARTA, INDONESIA: The Moon during a lunar eclipse – half a century exactly since the launch of Apollo 11 in 1969 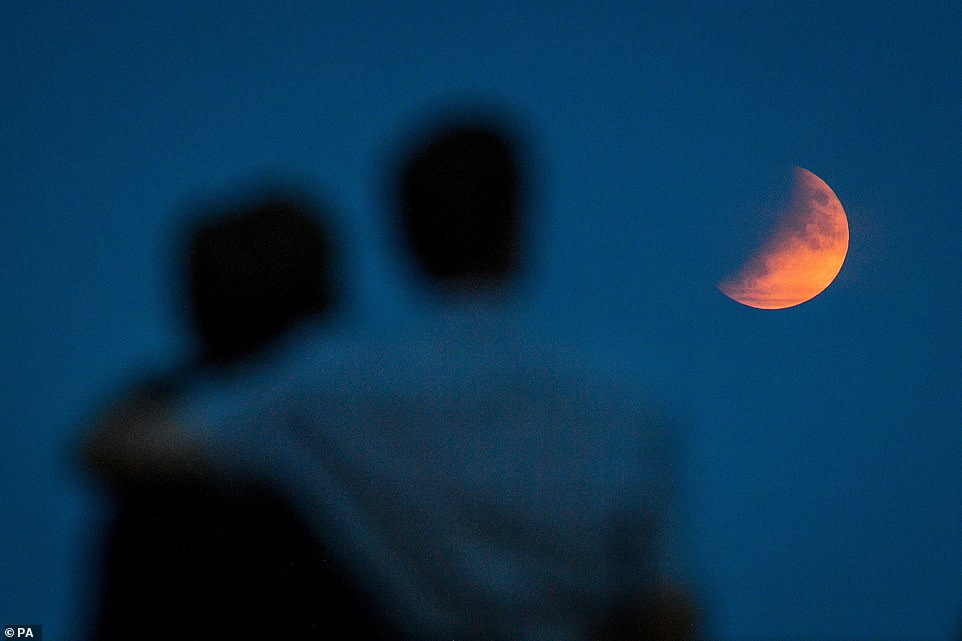 SIDMOUTH, DEVON: One stargazer puts his arm around another’s shoulder as they watch the eclipse in the South West 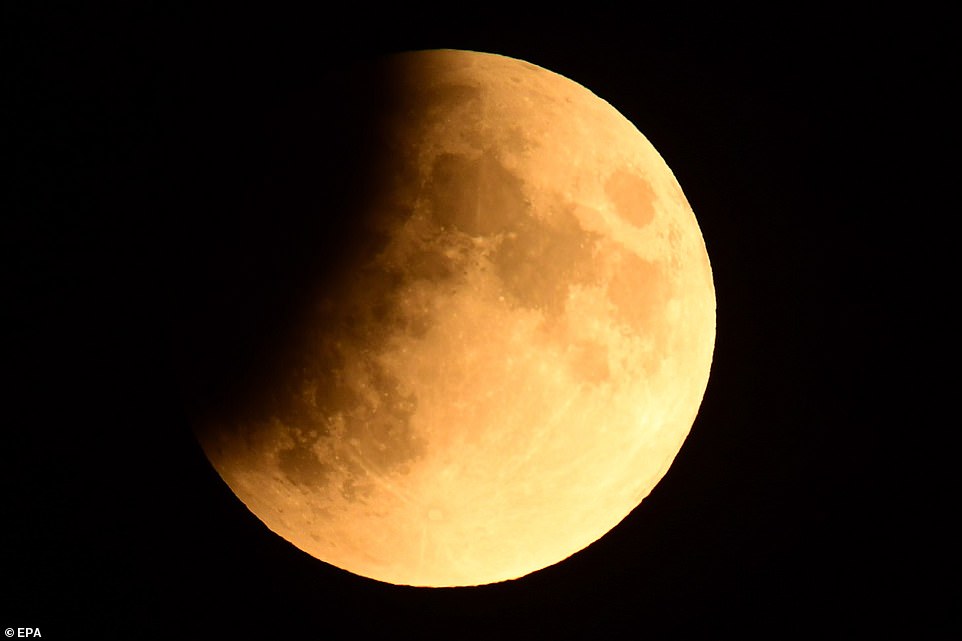 BERLIN, GERMANY: The Moon appears a bright orange colour, although partially obscured, in this picture in Germany 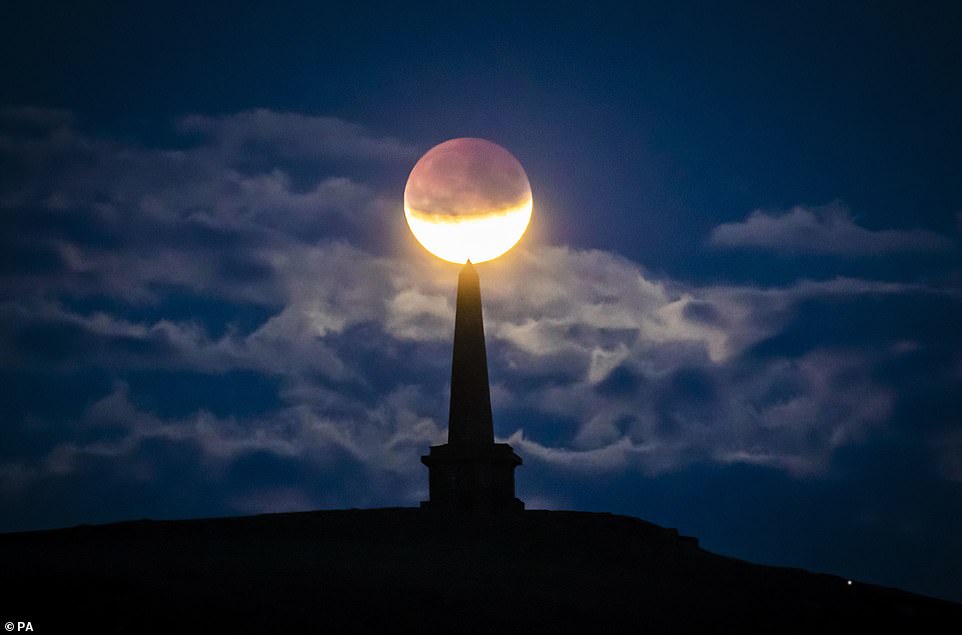 STOODLEY PIKE, WEST YORKSHIRE, UK: In this image, part of the moon appears brightly illuminated in the sky 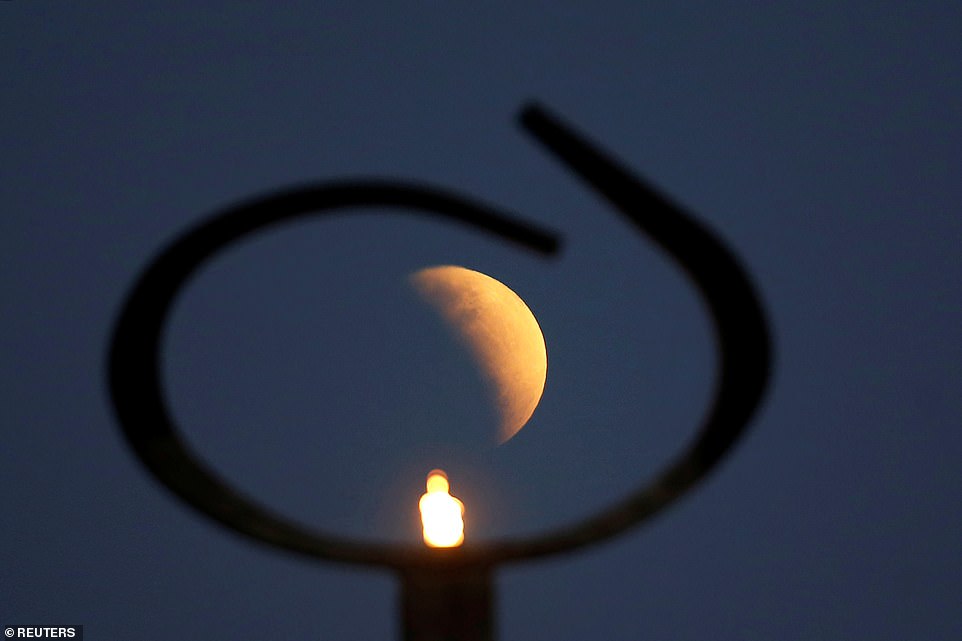 BRASILIA, BRAZIL: Part of the red-coloured Moon is visible through a candle-holder in this picture in the Brazilian capital 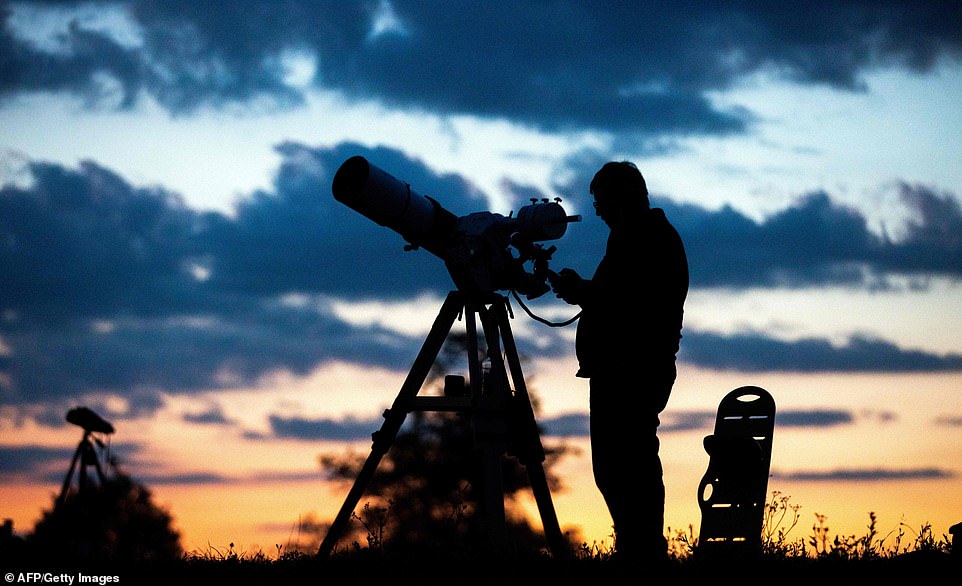 VIENNA, AUSTRIA: A man stands in front of his telescope as he attends with other people for the partial lunar eclipse