How many people believe Jeremy Corbyn’s statement yesterday that the NHS will be ‘on the table and up for sale’ in future trade talks between a Boris Johnson administration and the United States?

Quite a few, I reckon. Or at least there’ll be a good number who will worry that there could be an element of truth in what he says. No smoke without fire and all that.

Although we may complain about the NHS’s shortcomings, the institution has a special place in our hearts. It is part of our national life, and the thought that it might commercialise is deeply disquieting.

How many people believe Jeremy Corbyn’s statement yesterday that the NHS will be ‘on the table and up for sale’ in future trade talks between a Boris Johnson administration and the United States?

We know that if we or the people we love fall ill, the NHS will look after us. Maybe incompetently or churlishly on occasion, but it will always be there. And free.

But not according to Mr Corbyn, who has sent out a letter in which he asserted without qualification that the health service would be privatised under another Tory government.

More from Stephen Glover for the Daily Mail…

He urged people to ‘imagine opening a five-figure bill for your cancer treatment’ or ‘imagine paying to give birth’. He then declared: ‘That’s what Boris Johnson and Donald Trump want.’

That’s a very big claim. It will dismay a lot of people. I believe it is completely untrue. It therefore follows that I think the Labour leader is engaging in the politics of fear in a frantic attempt to win votes. That’s contemptible.

His latest lurid allegations were made public yesterday when he brandished hundreds of pages of government trade documents that had come his way. He claimed they were proof of the planned privatisation of the NHS.

But they are no such thing. The NHS is mentioned only four times in 451 pages. They give an account of six rounds of talks between British and American trade officials between July 2017 and July 2019. That’s before Mr Johnson became Prime Minister.

The meetings encompassed the pharmaceutical industry, agriculture and climate change, as well as other matters. There was absolutely no discussion about the Americans selling so much as a thermometer to the NHS.

The documents show that the U.S. Government was interested in extending drug patents that stop cheaper generic medicines being used. But the British side gave no ground on this point after ‘limited’ discussions.

It’s clear the U.S. side wanted ‘total market access’ to the UK economy, but that is what each party would have been likely to say at the beginning of such negotiations.

Moreover, when the NHS was exceptionally mentioned during discussions, U.S. trade officials were described as ‘sensitive to the particular sensitivities with the health sector in the UK’ and didn’t have a ‘major offensive interest in this space’. 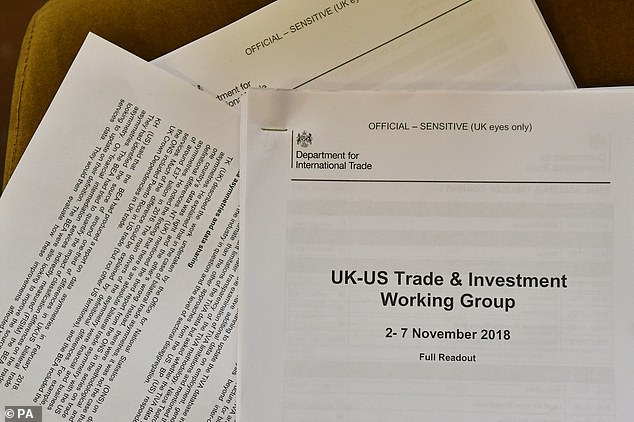 He urged people to ‘imagine opening a five-figure bill for your cancer treatment’ or ‘imagine paying to give birth’. He then declared: ‘That’s what Boris Johnson and Donald Trump want’

How does any of this begin to justify Mr Corbyn’s contention that the NHS is ‘up for sale’, and his insidious suggestion that we will end up having to pay for expensive medical care? It doesn’t.

It is, in truth, such a far-fetched and unsubstantiated extrapolation of what appears in the documents that I’m amazed the media should have given the Labour leader the time of day — and that he should have had the brass neck to peddle such nonsense.

Some independent-minded journalists immediately rejected Mr Corbyn’s wild claims. Hugh Pym, the BBC’s health editor, tweeted: ‘There’s nothing in these meetings which suggests these NHS contracts are on the table.’

The Corporation’s political editor, Laura Kuenssberg, wrote on the BBC website: ‘Jeremy Corbyn doesn’t provide evidence ministers have agreed the health service should be part of a trade deal with U.S.’ 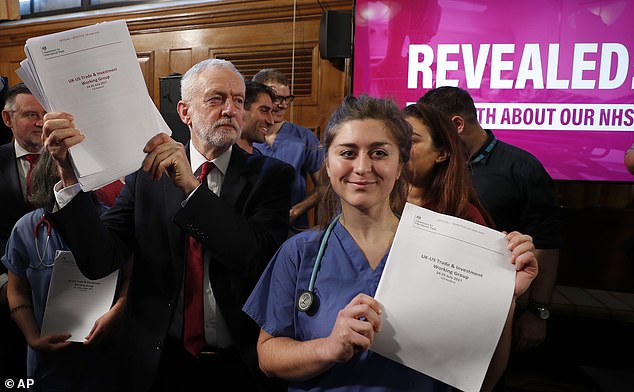 I realise that all parties have told lies and half-truths in this election (I lost count of them during the speech by Nicola Sturgeon at the launch of the SNP manifesto yesterday), but the claim that Mr Johnson intends to flog off the NHS is in a category of its own

And yet, despite these sober judgments by its leading experts, the BBC website yesterday ran a lead story for several hours with this dramatic headline: ‘Proof NHS at risk under U.S. trade deal — Labour.’

I realise that all parties have told lies and half-truths in this election (I lost count of them during the speech by Nicola Sturgeon at the launch of the SNP manifesto yesterday), but the claim that Mr Johnson intends to flog off the NHS is in a category of its own.

How does one counter the really big lie when it is already half way around the world, given a helping hand by the august BBC and other media organisations, before multiplying endlessly on social media?

All one can do — apart from illuminating the shoddiness of Mr Corbyn’s assertions — is to point out that the Tory manifesto explicitly states that neither the price paid for drugs, nor the services provided by the NHS, would be ‘on the table’ during trade negotiations with the U.S.

Could this be another lie? I very much doubt it, because Boris Johnson (who has given a ‘cast-iron guarantee’ that the NHS won’t be part of formal talks) would never survive such a colossal betrayal.

Oh, I know that he, too, sometimes tells lies. But it would simply not be feasible for any Prime Minister categorically to deny that the NHS will be sold off — and then proceed to do it.

And why, anyway, would he do so? Such mendacious behaviour would make him the most hated politician in recent history, which is saying something. It would be on his gravestone. He’d have to be mad, as well as irremediably twisted, to contemplate it for a second.

The truth is that the Tories have been forced to ration funds for the NHS since 2010 as they grappled with the enormous deficit bequeathed by Labour. Even so, between 2009/10 and 2018/19, the NHS budget in England grew by an average of 1.15 per cent a year in real terms (discounting inflation).

Now there has been a change of heart and the Conservatives have pledged to increase NHS spending in England from its present level of £129 billion to £149 billion in 2024. Only an economic recession is likely to deflect them.

Meanwhile, Labour is promising to spend a further £6 billion on top of the Tories’ figure by 2024. Voters will have to make up their minds. They may think the slightly greater expenditure on health indicated by Labour is a reason for voting for Jeremy Corbyn.

Or they may reflect — as I certainly do — that Labour’s wildly unrealistic economic policies, and the possible effects of a four-day working week, are likely to make it harder to deliver the extra spending on the NHS that it wants.

One way or another, though, the NHS will almost certainly be better funded over the next five years than it has been over the past ten, and so waiting lists will begin to reduce. 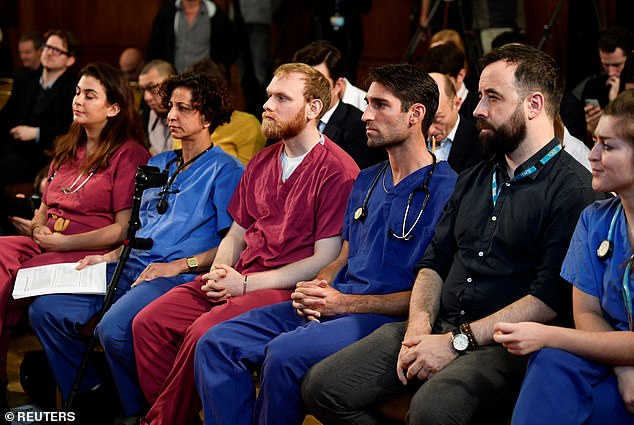 One way or another, though, the NHS will almost certainly be better funded over the next five years than it has been over the past ten, and so waiting lists will begin to reduce

The proportion of GDP (the value of all goods and services) devoted to health will rise slightly. At the moment, it stands at 9.76 per cent, compared with 8.94 per cent in Italy and 11.14 per cent in Germany.

Whoever wins, Tory or Labour, the NHS will improve — though whether it’s the best system in the world is a subject for another day, or probably another decade, given the reluctance of the British people to consider alternatives.

What is 100 per cent certain is that the NHS isn’t going to be sold to the United States. There are many things in life worth worrying about without Jeremy Corbyn’s desperate downright lies and shroud-waving about the future of our health service under the Tories.