The strangest thing about the second season of the Netflix series Stranger Things wasn’t Eleven’s new longer hairstyle, the terrifying shadow monster, or even ‘dancing Hopper’. Instead it was the evolution of character Steve Harrington into a role model – and heartthrob.

In season one, Steve – played by 25-year-old actor Joe Keery – was the bad boy jock that everyone loved to hate, but come season two, fans got the chance to see a softer side of the teen as he began to serve as almost a father figure to middle school students, Mike, Lucas, Max and particularly young Dustin.

And although their characters may have not fully appreciated Steve’s transformation, fans of the show definitely took notice and shared on social media their excitement over new and improved ‘babysitter’ Steve.

Breakout star: Since the premiere of season two of Stranger Things, people have took to social media to express their love for the character Steve Harrington 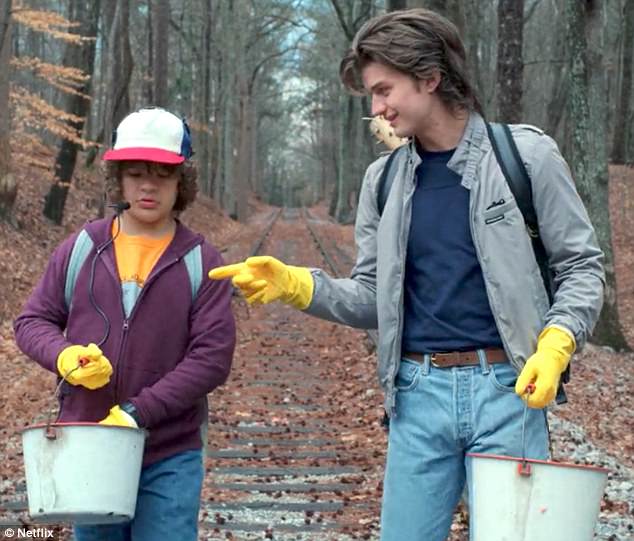 Developed character: In season two of the show, Joe and Gaten’s character’s start a friendship

Another fan took notice of the new Steve in a Tumblr post that highlighted the differences fans see in season two versus season one.

The post said: ‘Character development is Steve Harrington going from popular jock with tubular hair, to doting mom with a dish towel on his shoulder, hands on his hips and telling kids to stay out of trouble.’

And the comments didn’t end there with one Twitter user juxtaposing Steve with Hopper in a tweet that said: ‘Hopper: Eleven’s new dad. Steve: Everyone’s new dad.’

Stranger Things 2: A fan of the Neflix series tweeted what they thought was the difference between season one and season two

Hopper vs Steve: Another fan said that while Hopper was Eleven’s new dad, Steve was ‘everyone else’s new dad’ 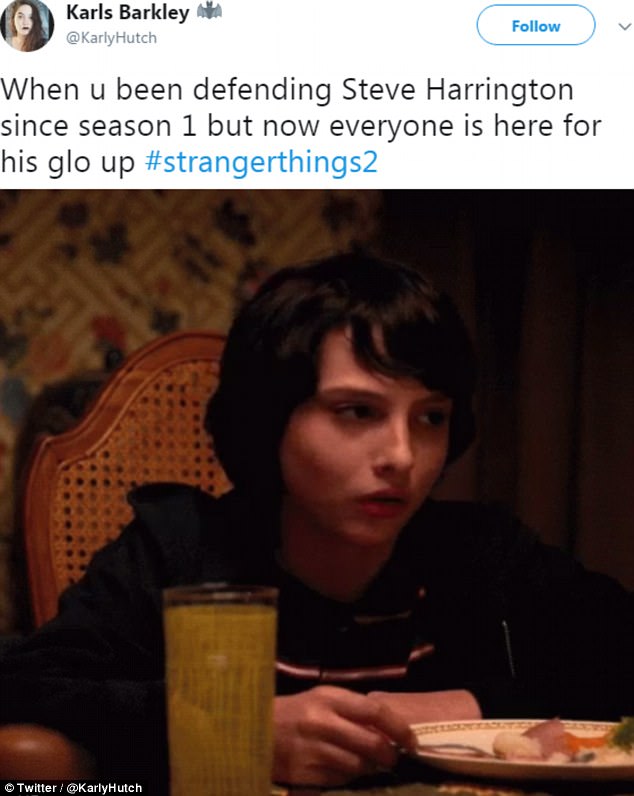 The ‘glo up:’ One fan used a picture of Mike to express their feelings over everyone becoming new fans of Steve Harrington

And even with newly dumped Steve hanging around 13-year-old kids, people still loved the character.

One fan tweeted: ‘Sexual orientation: Steve Harrington holding a baseball bat covered in nails’ while another said: ‘When you [sic] been defending Steve Harrington since season one but now everyone is here for his glo up.’

But the ‘glo up’ wouldn’t have been complete with Dustin who the character formed a close friendship with in the second season.

One tweet said: ‘The friendship between Dustin and Steve was one of the things I loved most about the season’ and she wasn’t the only one as Joe Keery also appreciated the bond he had with Dustin, played by Gaten Matarazzo.

When Steve Harrington comes through: Another fan said that the character would ‘get it’ when he ‘comes thru’ 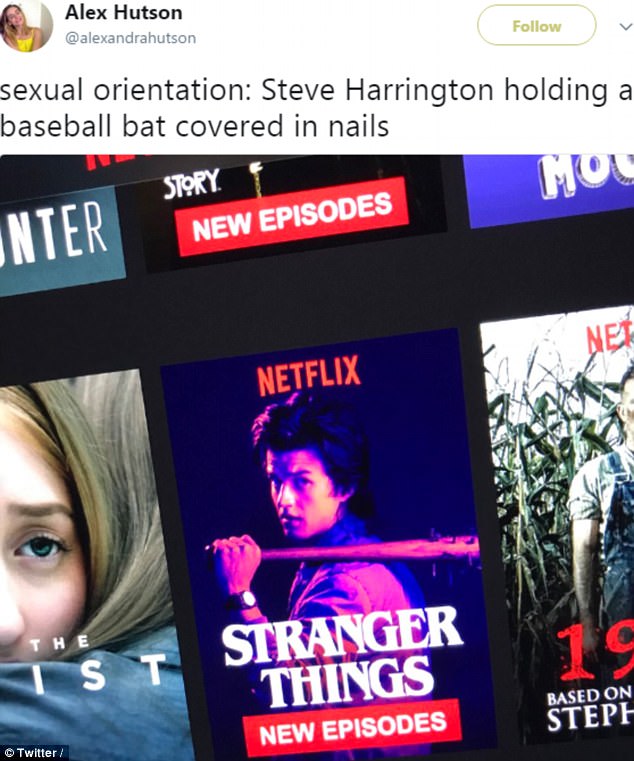 Sexual orientation: A fan shared that Steve Harrington holding a baseball bat was her sexual preference 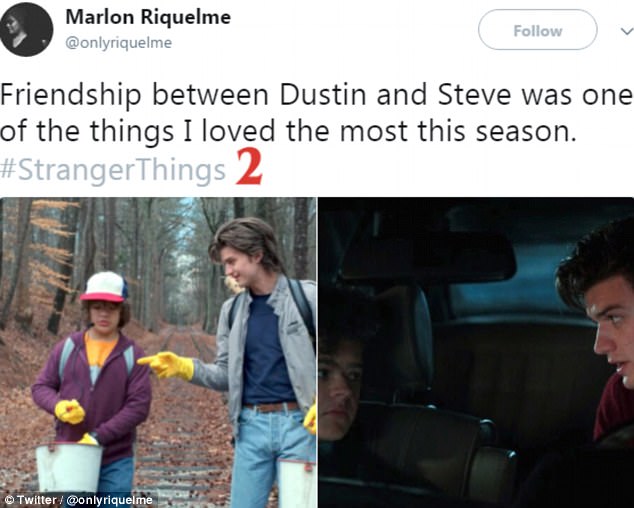 Unlikely friendship: One fan tweeted that their favorite thing about season two was the relationship between Dustin and Steve

‘That relationship is kind of an homage to movies from that period,’ Keery told Vanity Fair. ‘These two different sort of characters who disagree, but there’s this sense of caring underneath. Also, it was just such a blast to work with Gaten.’

‘It’s great,’ he said. ‘Because it’s like you’re at camp or something. You’re just playing pranks on each other and trying to make each other crack up during takes.

Joe Keery has said nothing but wonderful things about his 15-year-old co-star. ‘Gaten is such a genius. he’s such a smart funny kid. And I’m learning so many things about how to be spontaneous and relaxing,’ he told Esquire.

‘The kid is obviously 10 years younger than me, but he feels more mature than me. He’s a gracious kid, man. He has a really good head on his shoulder. A lot of people ask me how the kids are, and the kids are doing excellent. They’re dealing with such a crazy thing going on in their life.’ 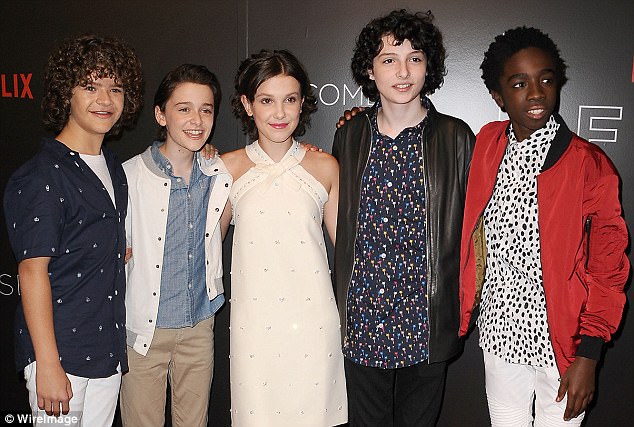 ‘The kids are doing excellent:’ Joe Keery said that the kids are ‘dealing with such a crazy thing going on in their life’ 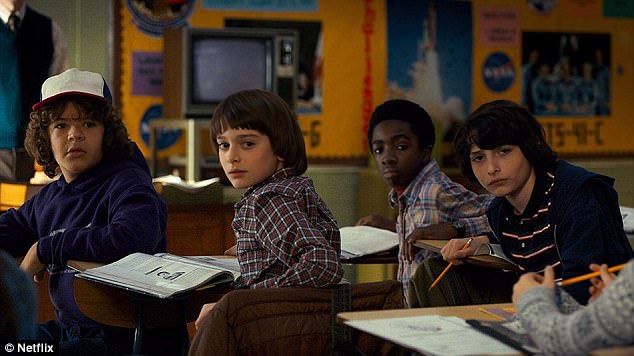 A great relationship: The actor, 25-year-old Joe Keery sometimes posts pictures of him and the kids on his social media. Photo from the Netflix series Stranger Things

Fans of the show who follow Joe on social media can easily see that he has a great relationship with the young actors as he sometimes posts pictures of him and the kids on Twitter and his Instagram account under the handle, uncle_jezzy.

Maybe Steve is more of a cool uncle rather than a dad but only time will tell and fans that have already watched the entire season of season two are already awaiting what’s next in season three for their favorite characters – including the actors themselves.

‘Whenever there are like events and stuff, we’ll all kind of pester them [the Duffers] and ask them what’s what,’ Joe told Entertainment Weekly.

‘They’re very collaborative in terms of your ideas about the character. We’ve talked about it and I’ve got some ideas. I feel like I should probably not say just in case any of them come true then I’m spoiling the season.’

One things for sure, the third season of Stranger Things better still have plenty of Steve Harrington being the daredevil babysitter that he was in season two.