Rights groups say the Public Order Act targets women and is a holdover from the three-decade rule of toppled autocrat Omar al-Bashir.

‘This law is notorious for being used as a tool of exploitation, humiliation & violation of rights,’ Prime Minister Abdallah Hamdok tweeted in reference to the overturned law.

‘I pay tribute to the women and youth of my country who have endured the atrocities that resulted from the implementation of this law.’

Sudanese students can be seen protesting on the roof of a building overlooking a mosque during the time for Friday prayers in the capital Khartoum today. Sudan’s transitional government announced today they would overturn the Public Order Act, a Shariah-based law that was seen to target women and the young 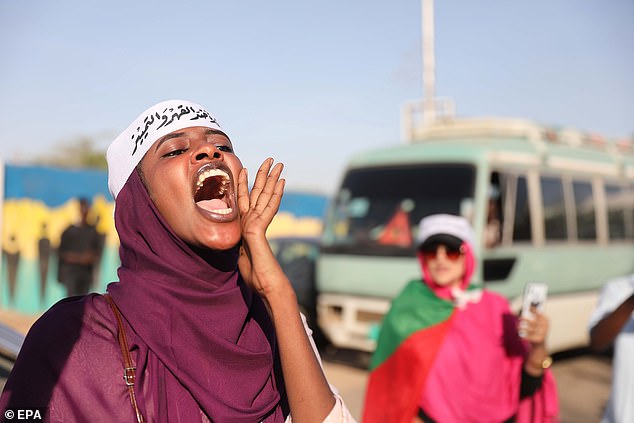 A Sudanese woman cheers as she celebrates the launch of the Unit to Combat Violence against Women and Children, in Khartoum on Monday. Activists have decried the Public Order Act, arguing that its vague language gave police leeway to prosecute women, who later played a crucial role in the mass protests that culminated in al-Bashir’s overthrow in April

The Public Order Act was first passed in 1992 by al-Bashir’s Islamist government and enforced only in the capital, Khartoum, before being applied nationwide four years later.

The Shariah-inspired law outlawed a wide range of individual behavior including revealing clothing and drinking alcohol. Those convicted of violating the act could face prison sentences, fines, lashing and confiscation of property.

For decades, human rights activists have decried the law and argued that its vague language gave the police and judges leeway to prosecute women, who later played a crucial role in the mass protests that culminated in al-Bashir’s overthrow in April.

Amnesty International welcomed the repeal of the controversial law as ‘a step forward for women’s rights.’

The London-based rights group also called on the transitional government to overturn other repressive clauses in criminal laws such as articles dictating women’s dress code and flogging as a form of punishment.

Sudan’s sovereign council and cabinet announced both decisions after a fourteen-hour long meeting that ended shortly after midnight on Thursday.

It said the law to dismantle al-Bashir’s National Congress Party would also confiscate all the ex-ruling party’s assets and funds. 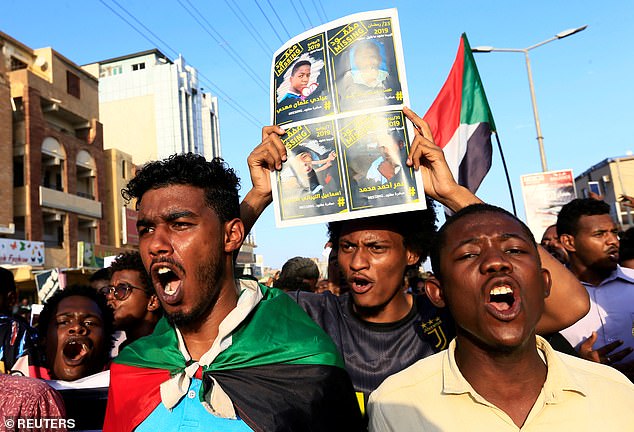 A file photo from October shows Sudanese protesters chanting slogans during a rally calling for the former ruling party of Omar al-Bashir to be dissolved. Prime Minister of the transitional government, Abdallah Hamdok, said today that the dismantling of al-Bashir’s party is not ‘a quest of vengeance’ but to ‘restore the dignity of our people’

The sovereign council grew out of a power-sharing agreement between the country’s ruling generals and protesters demanding sweeping political change.

Under the deal, the council and the civilian-led cabinet share legislative powers until a new parliament is formed.

Pro-democracy groups in the country have also held fresh protests demanding the former ruling party’s disbandment and the exclusion of all its remnants from different state institutions.

Prime Minister Hamdok tweeted that the bill dismantling al-Bashir’s party is not the outcome of ‘a quest of vengeance but rather to preserve and restore the dignity of our people who have grown weary of the injustice under the hands of NCP, who have looted & hindered the development of this great nation.’

The Sudanese Professionals Association, which spearheaded the uprising against al-Bashir, hailed the move as ‘an important step’ towards the establishment of a civil and democratic state in Sudan.

Sudan’s Justice Minister Nasr-Eddin Abdul-Bari announced that the law passed by the interim government on Friday would transfer all assets and funds of al-Bashir’s party to the state treasury.

‘With this law, we will be able to retrieve a lot of funds that were taken from the public treasury to create institutions that acted as a parallel state,’ Abdul-bari told reporters after the meeting.

Al-Bashir was arrested after his overthrow in April and is currently on trial for charges of corruption and money laundering. A verdict is scheduled for December 14.