An eagerly awaited Nintendo-themed world will open at Universal Orlando Resort in 2023, it has been revealed.

Super Nintendo World, which will be based on characters such as Mario and Pokemon, will form part of a fourth theme park, called Epic Universe, at the Florida attraction.

It was reported as far back as 2017 that a Nintendo-themed land was set to open at Universal Orlando Resort.

An eagerly awaited Nintendo-themed world at Universal Orlando Resort will open in 2023, it has been revealed. It will be based on characters such as Mario, pictured, and Pokemon

Then last week, executives of Comcast, which owns the resort, announced when it would open during a question-and-answer part of their earnings call.

The new theme park is part of a more extensive expansion at Universal Orlando that will double the size of the resort.

It will be located on a 750-acre (304-hectare) site a few miles from the current Universal Orlando property, which is home to the Universal Studios and Islands of Adventure parks, as well as the Volcano Bay water park.

More than 14,000 workers will be hired on top of Universal’s existing 25,000-person labour force in Orlando to run the attraction. They will be paid a starting minimum wage of $15 an hour, officials said.

The new attraction should draw millions of additional visitors to the Universal parks, just as the first Harry Potter attractions did when they debuted a decade ago, executives said. 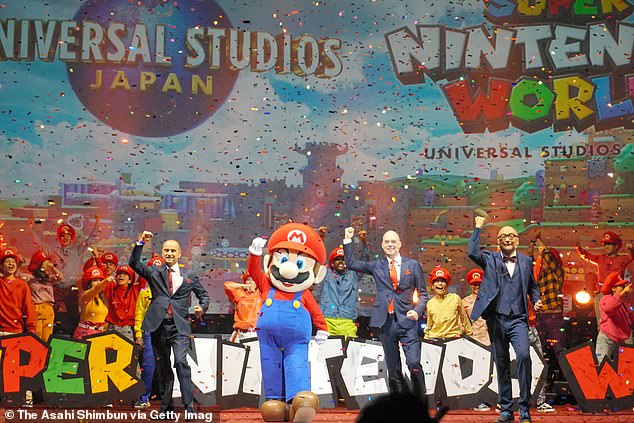 Earlier this month, Universal and Nintendo revealed new details about Super Nintendo World, which is due to open at Universal Studios Japan in Osaka this summer 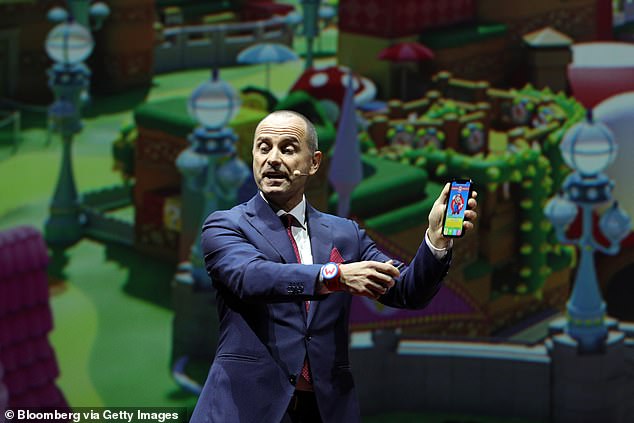 Thierry Coup, senior vice president of Universal Creative, wears a ‘Power Up Band’ wristband. Visitors to the Super Nintendo World in Japan will be able to wear the wristbands to collect digital coins – just like players can in the Mario games

It has been promised that guests will be able to enjoy an ‘experience that blends the physical world with the world of the video game – bringing the world of Nintendo to life’.

It was confirmed at a press conference earlier this month that one experience at the park will be based on Super Mario’s Mushroom Kingdom Universe.

Visitors will be able to wear wristbands, called Power Up Bands, which will allow them to collect digital coins, just like Mario does in the games.

As they explore the theme park, they can compete with others in ‘fun and friendly competitions’ in a bid to collect the coins.

Another Nintendo park is also due to open at Universal Studios Hollywood, but there is no launch date yet.