Mohammed Bashir Zaheer (pictured) was stabbed to death on Thursday morning. He is pictured six months ago at a family wedding

A security guard who allegedly stabbed his boss to death in the foyer of an apartment building had pulled a knife on him before.

Mohammed Bashir Zaheer, 44, the building manager, was killed at the Mirage apartment block in Pyrmont, Sydney, about 8am on Thursday.

He was found slumped in the lift with the foyer covered in blood and could not be revived by paramedics.

Alleged killer Jiwad Jiwad fled the scene still wearing the blue suit that was his security uniform, sparking a citywide manhunt before he was arrested about 7pm.

The 41-year-old was arrested on Macquarie Street in Parramatta in Sydney’s west just on Thursday night.

He was taken to Westmead Hospital for observation, where he remained under police guard early Friday morning.

No charges have yet been laid and inquiries are continuing.

The pair have known each other for more than 20 years, meeting in India after leaving Kabul in Afghanistan and moving to Australia in the late 1990s. 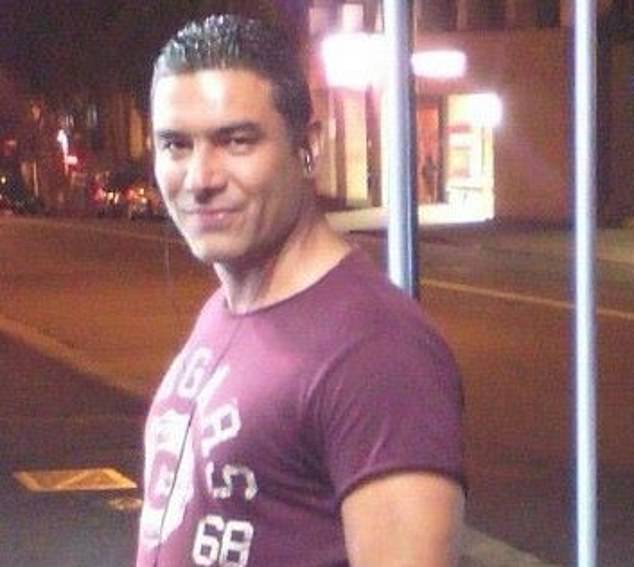 Alleged killer Jiwad Jiwad, 41, fled the scene, sparking a citywide manhunt before he was arrested about 7pm

Jiwad also allegedly threatened at least one other person with a knife but was never charged over any of the incidents.

However, he was arrested at least once for drug offences and was a regular user of meth, which gave him a violent temper, Mr Zaheer’s family said.

Mr Zaheer, a respected member of the Afghan community, ran Four Star Security since 2001 after arriving in Australia via India with barely a penny to his name.

His ex-brother-in-law AJ said Mr Zaheer worked at Mirage for $10 cash-in-hand more than 15 years ago and worked his way up to management, and amassed a large property portfolio.

Mr Zaheer’s father died in New York less than two months ago and he was unable to attend the funeral due to the coronavirus travel ban.

Outside the building mourners were comforted by loved ones as police and paramedics assisted.

A woman in a headscarf was distraught perched on a garden ledge could be heard weeping before collapsing on the footpath with Mr Zaheer’s sister Najia.

The group were later helped into the nearby ambulance. 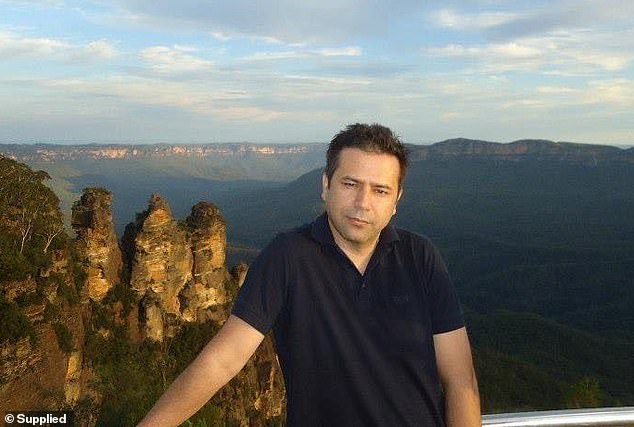 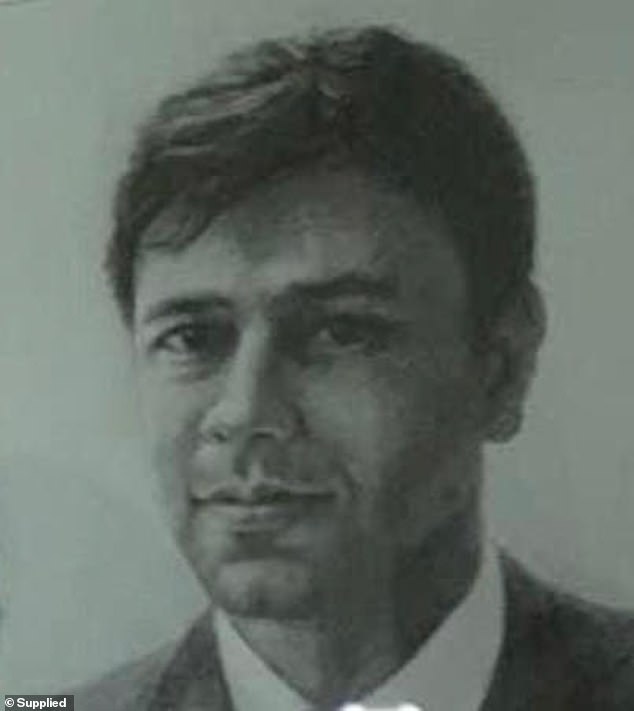 Later the group wailed and screamed Mr Zaheer’s name in anguish as his body was wheeled out of the hotel about 3.30pm.

AJ told reporters Mr Zaheer was a pillar of the Afghan community who worked tirelessly as a penniless immigrant to build his ’empire’.

‘Bashir started working here [at the Mirage] for $10 and hour cash, sleeping only four hours a night, working his way up,’ he said.

‘He started with nothing and did everything with hard work, now he owns more than 20 units all over Sydney.’

An emotional AJ said the family was planning to find Mr Zaheer a wife as he deserved to be happily married amid his success.

‘We are all so proud of him. Everyone loved him, no one had a bad word to say about him – I challenge anyone to say anything bad about him,’ he said.

‘You want perfect? He was the perfect man… He was the light of our family and our community.’

AJ said Mr Zaheer was a devout Muslim who prayed five times a day, and never drank alcohol, smoked, or ‘even looked and another man’s woman’.

‘His two sisters relied on him. What a guy… I just can’t believe he’s gone, he didn’t deserve this.’ 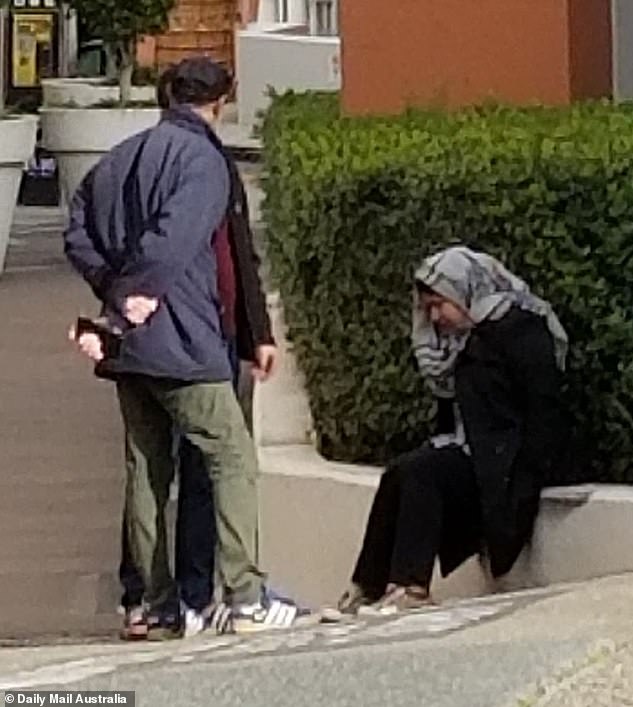 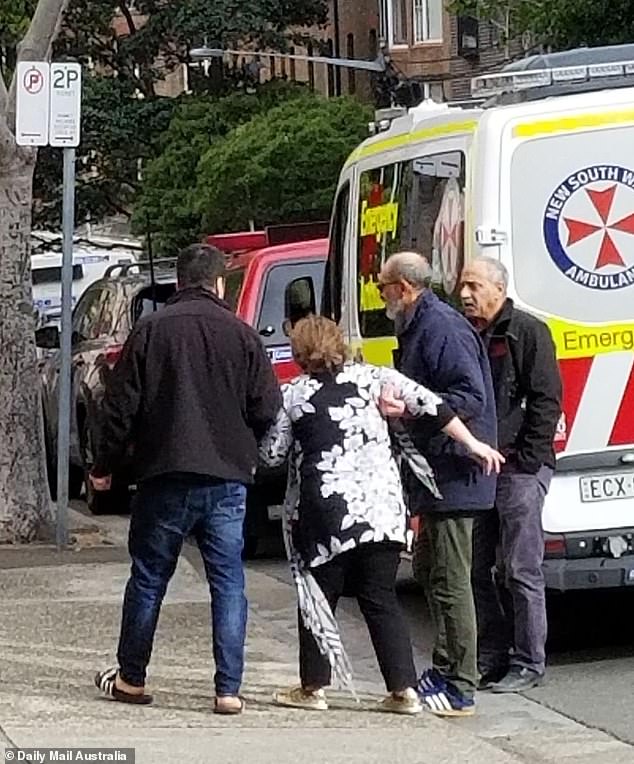 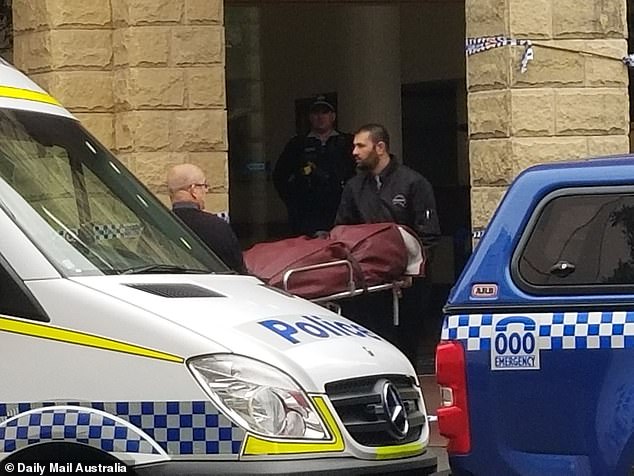 Pictured: A body is wheeled out of the apartment block on Thursday afternoon

Furious that anyone would hurt such a beloved and kind man, AJ said he didn’t know who was responsible, but if it was an employee they were a traitor.

‘He’ll get what’s coming to him, even dogs are loyal,’ he said.

Mr Zaheer was dedicated to his community and was a committee member of the Neda-E-Afghan Cultural Council Association.

Shocking photos taken at the apartment block showed what appeared to be a body covered by a blue sheet as forensics workers combed the tower for evidence and took pictures of the crime scene.

One resident said blankets and a stretcher were used to pull the man’s body out of the lift and into the lobby.

Residents described Mr Zaheer as a kind and helpful man who happily chatted to small children.

James Wen, who owns a unit in the building, said the man lived in Mirage since at least 2008 after immigrating from Afghanistan. 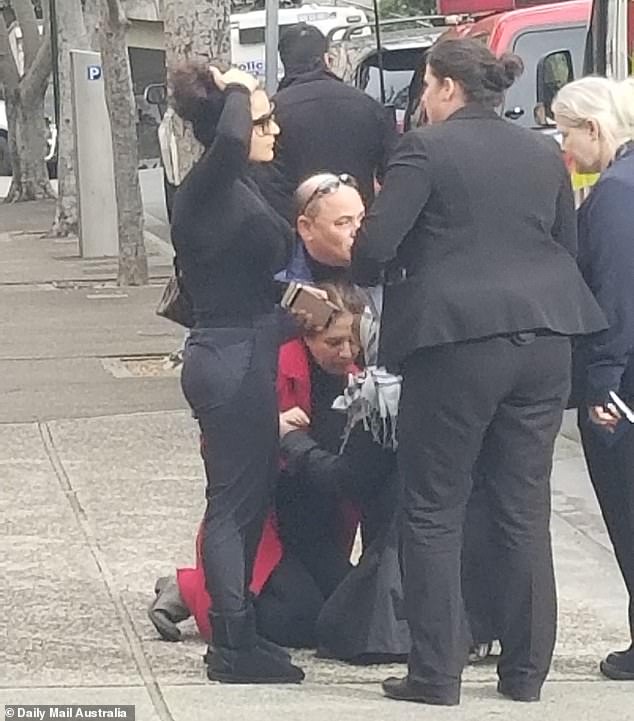 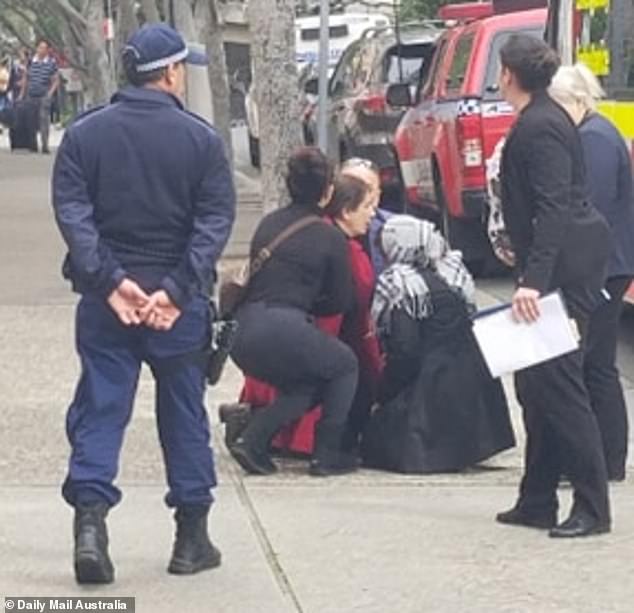 ‘He’s a nice guy, he works very hard. He said hello to everyone who came in and out,’ he said.

‘He always tried to help people solve their problems because he feels like this building is his own.

‘He owns his own apartment and five or six others that he rents out.’

A friend who stopped by the scene said he was in shock that the man was suddenly dead.

‘I don’t know why someone would kill him… maybe he was trying to stop someone coming in to hurt someone else,’ he said.

‘He was the kind of person who would do that to help people there.’

Mirage resident Cameron Slaughter said he stumbled upon the horrific scene as he returned from the gym moments after the killing. 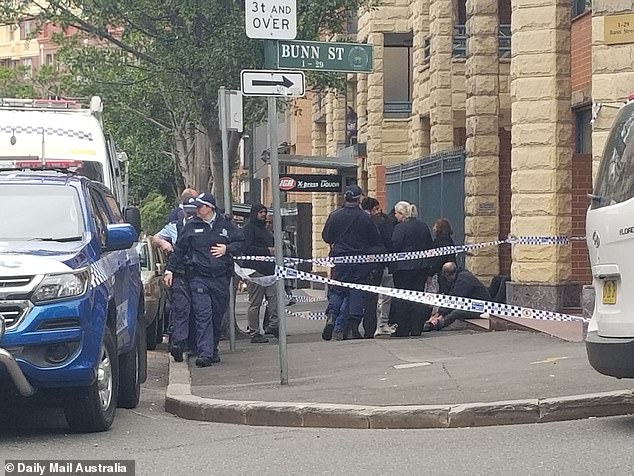 Police tape is seen around the apartment block in Pyrmont, Sydney, on Thursday 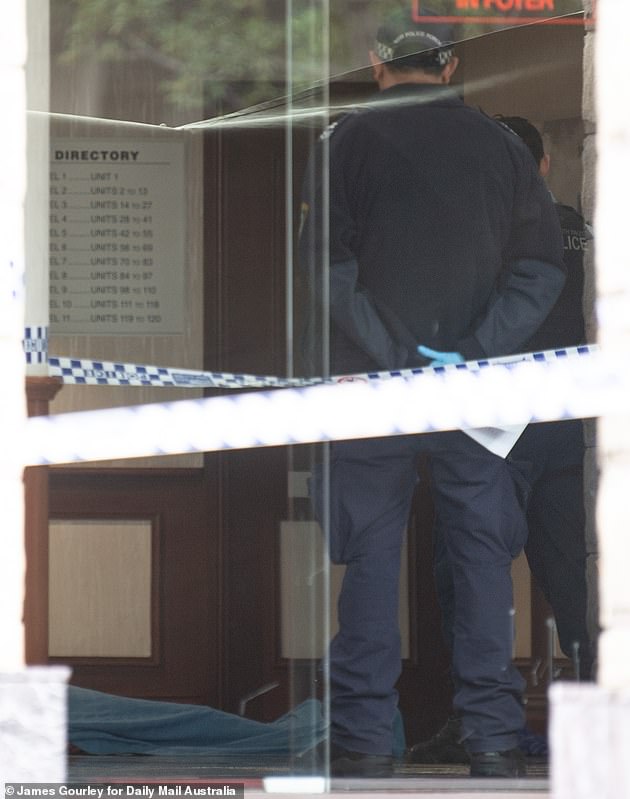 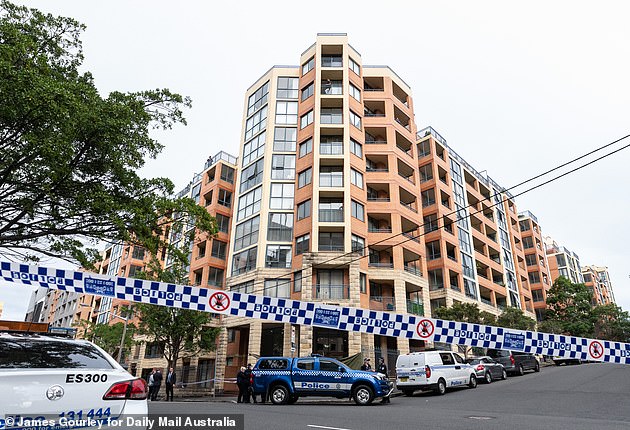 ‘The lobby was covered in blood, there was a stretcher and as they were moving the stretcher out of the lift area I noticed they were putting blankets around the stretcher,’ he told reporters.

The stabbing is believed to have taken place during the changeover from night shift at 6am to day shift at 8am, during which the victim manned the desk.

‘They’re distraught, as you can imagine. Very, very distraught.’Same as the police and other emergency services that turned up not long after,’ he said.

A manhunt is underway for the alleged killer, aged 35 to 40 and of ‘Mediterranean or Middle Eastern appearance’, wearing a blue suit – his security guard uniform.

Police are looking for a white Holden Viva with number plate AM23CQ that he ran to before fleeing the scene behind the wheel.

‘The person driving that car is the man we want to speak to,’ Supintendent Heaney said.

‘We don’t believe he’s armed but he has been involved in the death of this man, so we consider him very dangerous.’ 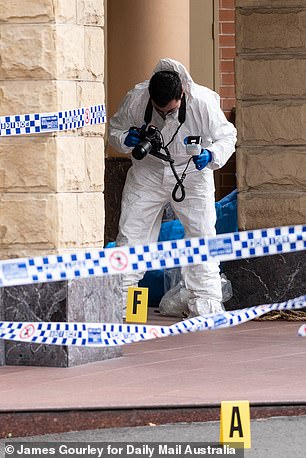 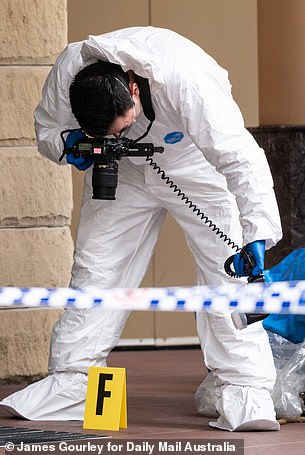 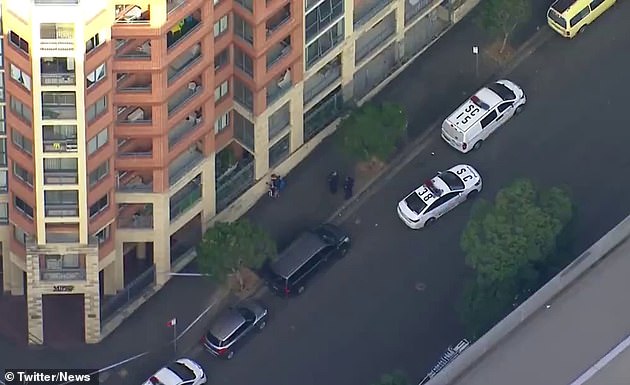 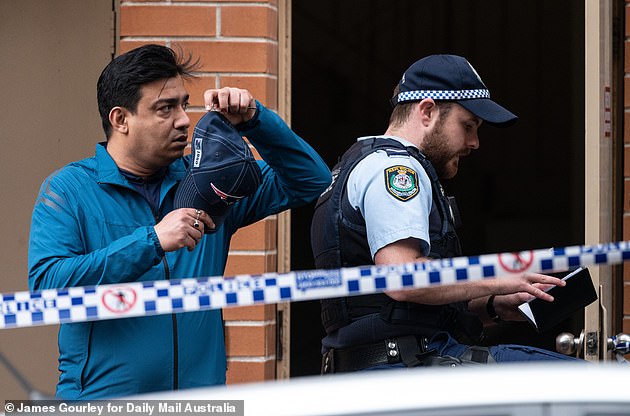 Three ambulance crews were called to the scene and tried in vain to give the man CPR, a NSW Ambulance spokesman said.

‘Arriving at the job was quite intense – you are never really sure what you are turning up to, so it can be quite unnerving,’ NSW Ambulance duty operations manager Inspector Nadia Tomlinson said.

‘This type of injury can cause significant damage and our paramedics were tremendous in providing treatment to the man, but despite their best efforts there was nothing more they could do.

‘The issue with treating these sorts of wounds is that you can’t always tell how much damage has actually been done internally.

‘When your job is to try and save a life, it is always tough for all emergency services when you get an outcome like this.’ 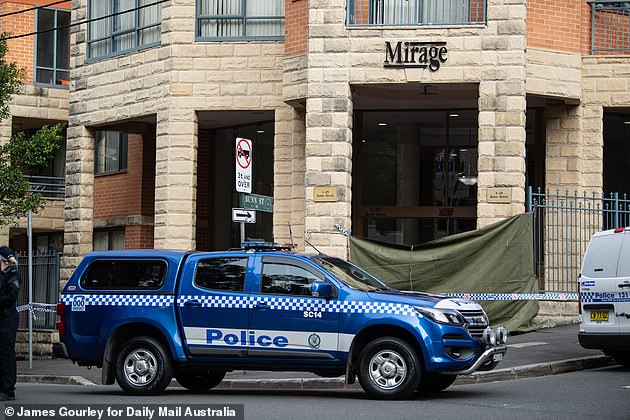 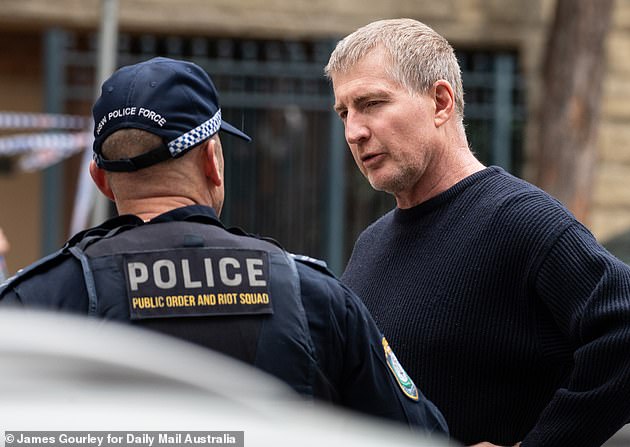