The experience was so humiliating that Fahad said it almost caused him to give up his dream of becoming a doctor.

In a TikTok video, which has almost 50K likes, third-year medical student Fahad Khan recalled his experience of attending  Sydney University’s Open Day as a year 12 student in 2016 from western Sydney.

Under the caption ‘Getting snobbed @USyd Open Day as a person from Western Sydney’ Fahad said the first thing he did was go to the medicine information session.

‘I saw that there were two medical students, I think, and about 10 Year 12 students with them,’ Fahad says.

‘When I went close to them I heard them speaking about things like ‘does Mr X still teach maths and does Mrs X still do that?’

‘And they were all having a laugh and I went ‘look they are all mates, that’s like pretty nice’.’

The caption on the TikTok video changes to: ‘This is why I believe there’s parts of USyd with a toxic selective/private school culture’ as Fahad describes trying to join in the conversation.

‘I tried to say hello and they ignored me,’ he says.

‘And they all turned around and they looked at me and then they looked away and one of the medical students was like ‘oh, hi’.

‘And then they all started talking about their high school again and I said ‘what the hell? They just like kind of ignored me’,’ Fahad says.

‘But I said ‘You know what? The session is starting in five minutes, maybe this is just a group of mates and fair enough if they want to talk to their mates before they start talking to everyone, that’s fine’.’

However, things did not improve when the session started.

‘The first question they asked was ‘Which high school did everyone go to?’,’ Fahad says.

‘Most of them were James Ruse students, there was some Sydney Boys [High] and Sydney Girls. 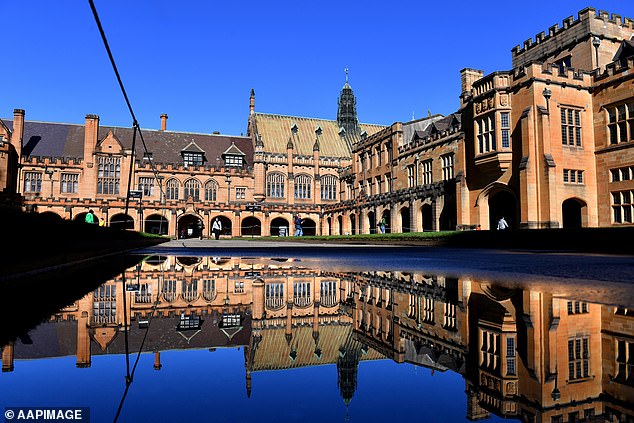 ‘I was the only student from a non-selective non-private school.’

Fahad describes what happened next as ‘unbelievable’.

He said all those from the selective and private schools were taken to one side of the room to talk to the medical students while he was left alone on the other side.

‘I asked them ‘Am I coming? Am I also included in this?’

The third medical student did not show up.

Fahad decided he was ‘going to force’ himself into the experience.

‘So, I went there and I sat with them, and I forced myself to sit with them and do what they were doing,’ Fahad says.

‘And I kid you not throughout the entire 100 per cent of the session they were talking about inside jokes from their high school.

‘Whenever I asked a question like, ‘How was first year? How was second year?’ they were like, ‘Oh yeah, it’s alright’.

‘Then they looked away and started talking about their high school again and I was like, ‘What the hell is wrong with these people?’.’

Fahad said the experience was shattering.

One TikTok user, who said they worked at the university, expressed their horror at the story

‘I remember leaving that session completely humiliated,’ he says.

‘Then on the train home I remember thinking about how my peers at school would laugh at me when I said I wanted to be a doctor and they would just say to me ‘you know some dreams are out of reach’.

‘That day almost made me believe I couldn’t be a doctor.’

On its website Sydney University says that ‘welcoming is part of our culture’.

‘We get behind a range of activities to ensure everyone is accepted and has equal opportunities when it comes to education and employment in our university,’ the university writes under the heading of ‘Diversity’.

The comments underneath the video made it clear that Fahad’s experience wasn’t unique.

‘I went through usyd med as one of the only non selective/public schooled/low SES students and it was so isolating being around so much privilege,’ one wrote.

‘Usyd was so toxic, I transferred there my 2nd uni year and the vast majority of people looked down on me for the area I came from,’ another said.

‘Definitely a superiority complex held by many students at usyd,’ another wrote.

‘They won’t go too far. I go usyd and I swear med sci kids r always like this!’

Fahad’s story touched at least one person who said they were associated with the university.

‘From someone that works at USYD: Really sorry you had to go through this man. Was heartbreaking to watch,’ they wrote.