Two brave police officers are being hailed as heroes after risking their lives in neck-deep water to save a man trapped in his sinking ute.

The probationary constables – Lindsay Morgan and Ryan Blume-Poulton – miraculously managed to pull the man from the submerged vehicle in rapidly rising flood waters in South Windsor on Sydney’s outskirts.

The dramatic rescue was sparked by an emergency call from a witness who saw the ute in trouble and noticed a ‘flicker’ in the window – which he quickly realised was a person.

‘He said he only had six inches between the water rising and the roof and due to his age and the pressure against the car door, he couldn’t get it open,’ Probationary Constables Lindsay Morgan told 9News.

‘Alright I’m going to smash the window, look the other way and close your eyes,’ one of the officers can be heard saying.

But eight attempts to break it with a rock and their batons failed.

Then one officer noticed the door was slightly cracked just enough for them to get their fingertips in and wench it open. 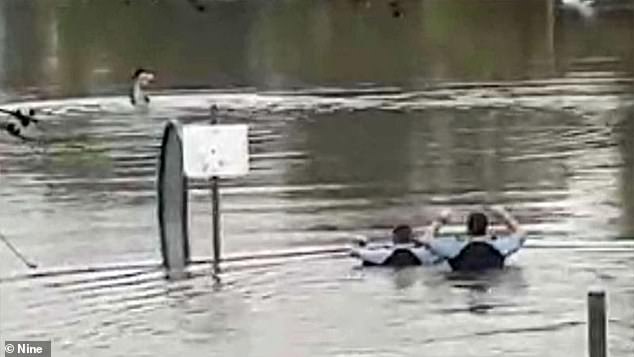 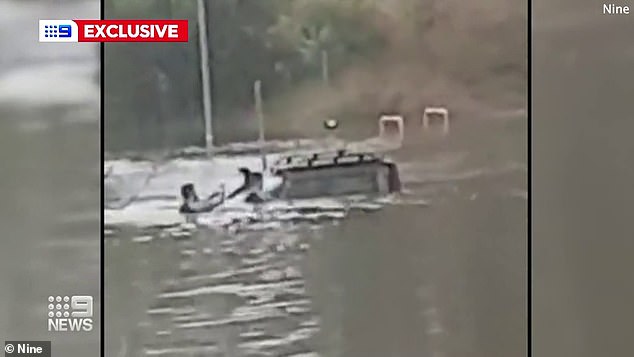 The officers said the water was so high at points they had to swim and found themselves hitting fences completely submerged they couldn’t see.

“You just don’t know what is under the water, crossing fences you couldn’t even see… at one point we were swimming across a lake,” Probationary Constable Ryan Blume-Poulton said.

The man who called in the emergency said if it wasn’t for the brave officers the man would have been lost.

“I rang the police and they were here within minutes,” David Malone said.

“They definitely would have drowned.’

The rescue comes as Sydney’s and large parts of NSW have suffered immense storms with an astonishing weekend of rain resulting in more precipitation since Friday than London experiences in 12 months.

Between Friday and Monday the Harbour City has copped a whopping 733mm – as causing life-threatening floods and an triggering a natural disaster to be declared.

That level of downpour swamps London’s annual average of 615mm despite it being one of Europe’s wettest cities which on average sees 109 days of rainfall per year.

A severe weather warning of heavy rain and damaging winds of up to 90km/h remains in place for Sydney, the NSW Central Coast and Hunter regions, with Gosford, Cessnock, Maitland, Dungog and Kulnura all in the firing line.

Authorities warned the floodwaters will take up to a week to recede even if the rain eases on Tuesday night as expected.

The Hawkesbury River at Windsor reached major flood levels for the third time within months, peaking at 14m on Tuesday morning – above the 13.8m level recorded in March. 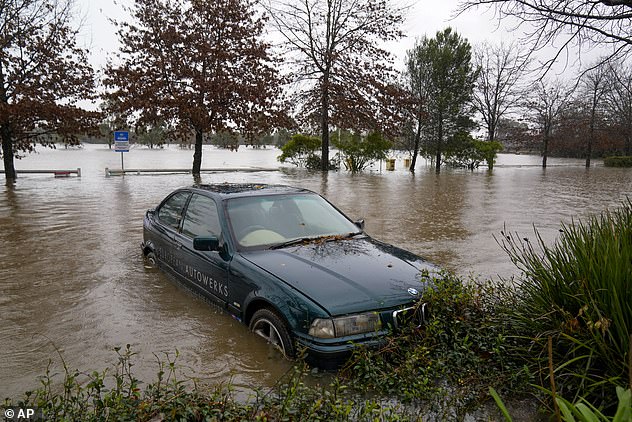 The Central Coast and Newcastle are expected to receive between 50 to 100mm of rain on Tuesday, while Sydney will be hit with 15 to 20mm (pictured, a flooded car in Camden) 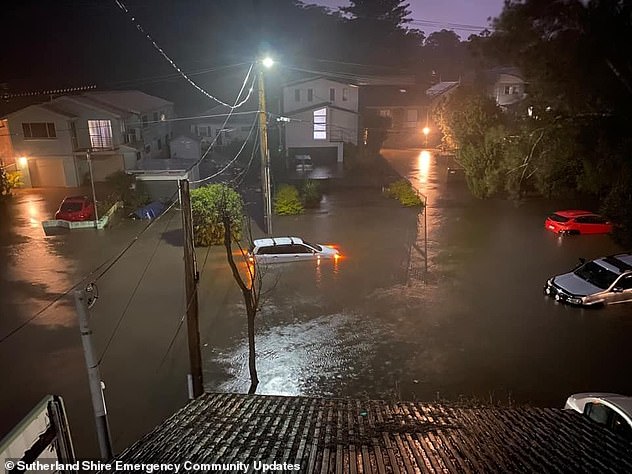 A fresh warning has been issued on Tuesday for the Budgewoi and Tuggerah Lakes areas and are now considered ‘high danger’ – with 19 suburbs at risk.