And at 73, Sylvester Stallone is still living by his mantra ‘Keep punching’.

On Tuesday, the actor shared a motivational message via his Instagram and in the accompanying video clip, revealed he is embracing his now gray hair and beard.

Motivational message: Sylvester Stallone is embracing his natural gray, revealing his new look in an Instagram post he shared on Tuesday

It’s the first time that Stallone has been seen with his natural hair color.

He’s been photographed with a salt-and-pepper look for the past several weeks, and it now appears he has been allowing his previously dyed black hair to grow out.

In the video, he is sitting in a luxury vehicle wearing a white hoodie and looking relaxed and tanned.

The vehicle is being driven along a wide tree-lined street as the Rocky legend talks directly into the camera, saying ‘Keep punching, my friend. Keep punching.’

Aging gracefully: It’s the first time the Hollywood icon, who’s 73, has been seen with his natural hair color. He’s been photographed with a salt-and-pepper look for the past several weeks 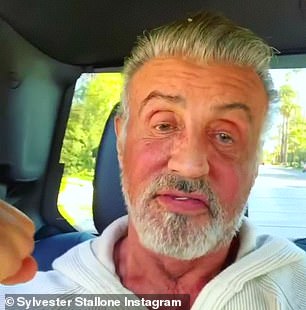 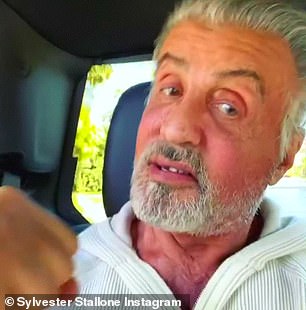 Shared advice: In the video, the actor, wearing a white hoodie, is being driven along a wide tree-lined street. The Rocky legend says ‘Keep punching, my friend. Keep punching’

In the caption accompanying the post, Stallone provided some context to his motivational message.

‘Sometimes I wake up I feel like doing nothing. Just relaxing. Just very true. If anyone says different, they’re lying – it’s human nature.’

‘Then you roll over, get a little mad at yourself, and realize to get anywhere you’ve got to make a deposit in the GOAL BANK. So, I’ll go back to my favorite phrase and do it!! #KeepPunching.’

Last September Stallone said goodbye to his famous alter-ego John Rambo with the release of the final installment of the franchise Rambo: Last Blood.

Next up, he’s about to start filming a sci-fi drama Samaritan for Overlord director Julius Avery.

The film, according to Deadline.com, ‘centers on young boy who is out to discover if a mythic superhero, who vanished 20 years earlier following a tragic event, is still alive.’ 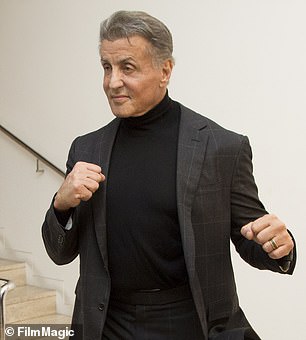 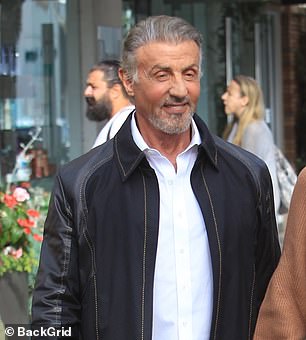 Growing dye out: In early November, Stallone appeared to have a few grays in his normally dark hair, left. Three weeks ago, he sported more of a salt-and-pepper look, right 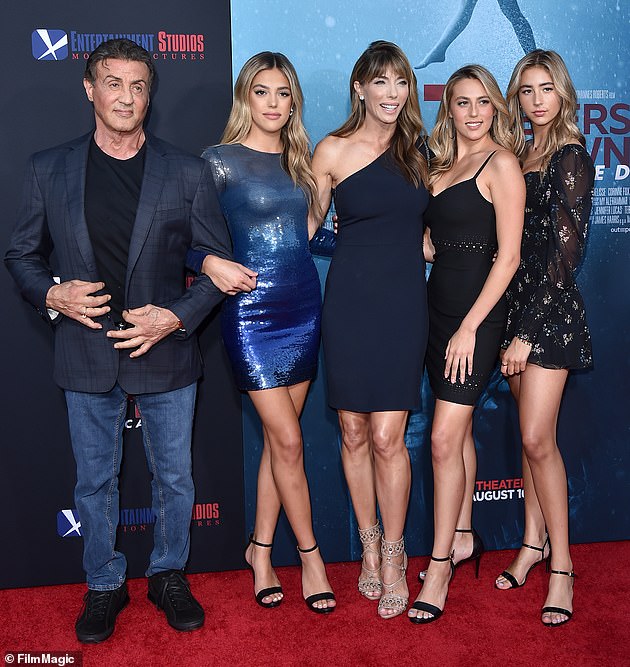 Hollywood star: Back in August, Stallone rocked a full head of black hair as he posed with wife Jennifer and their daughters Sistine, 21, Scarlet, 17, and Sophia, 23.

Later on Tuesday, Stallone headed out for dinner in West Hollywood with wife Jennifer Flavin.

Sly was dapper in a black shirt and black blazer paired with blue jeans while his wife of 23 years was casually stylish in a brown turtleneck sweater and skinny blue jeans. 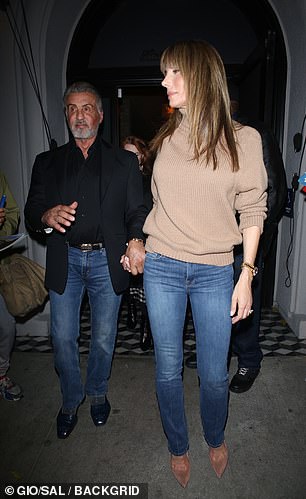 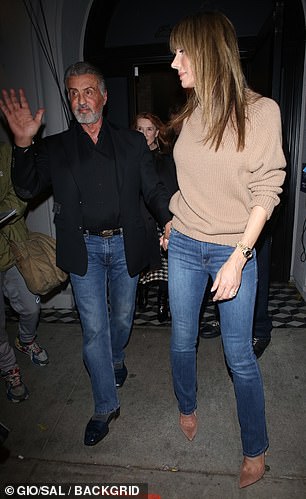