It’s a voyage through a posh wine list! Taste vintage Bordeaux on a river cruise up the Dordogne and Garonne

Thanks to its famous wine, Bordeaux is known all over the world.

Surprisingly, it’s not a big city – with a population of 240,000, it’s about the same size as Derby. It’s perfect for a short break and ideal as a base for cruising.

On a Uniworld cruise you can have both pleasures: enjoy a short break in Bordeaux together with a jolly river adventure.

Cruising here looks away from the sea and concentrates on the two rivers that meet up near Bordeaux: the Dordogne and the Garonne. To reach these rivers, cruise boats have to squeeze themselves under the city’s Pont de Pierre – one of the great spectacles of modern river cruising.

Actually, river-cruise ships can’t journey far down either river, so on a seven-night cruise from Bordeaux you’re never very far from the city.

The basis of a gentle holiday should be some relaxed pottering about. And this is exactly what you get.

Our Uniworld vessel, SS Bon Voyage, ventured 30 miles up the Gironde to Blaye and Pauillac before returning towards Bordeaux and then heading up the Garonne to Cadillac and afterwards up the Dordogne to Libourne before finishing with two nights in Bordeaux. 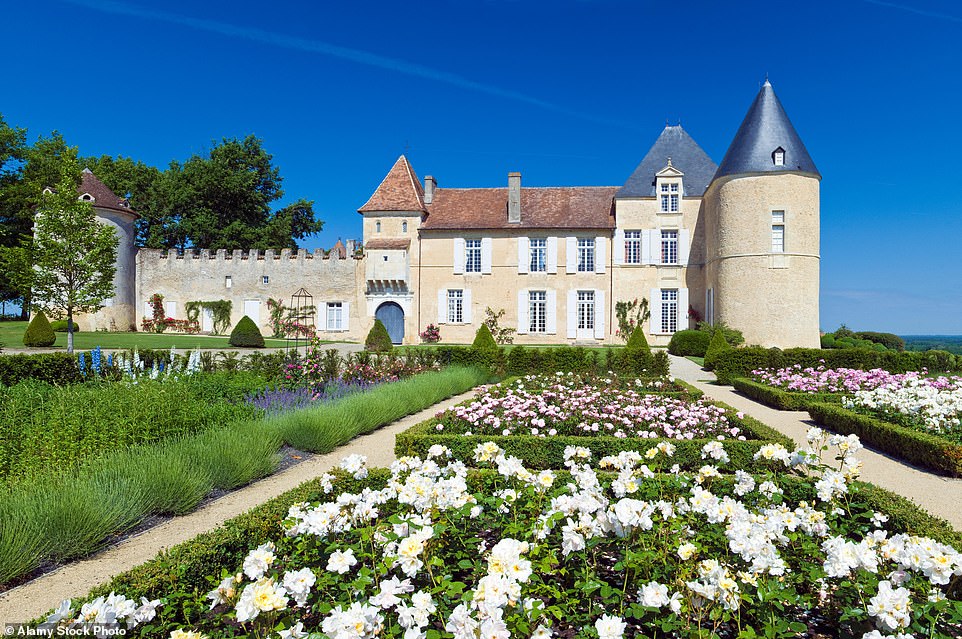 Noble rot: A visit to Chateau d’Yquem includes a tasting of Château d’Yquem vintage, considered the finest wine in the region

Almost the first thing you are given on board is a wine map of Bordeaux. A journey here is like a voyage through a posh wine list: heading up the Gironde there are great names to the right and left. On the left bank, for example, look out for St-Estephe, Pauillac, Médoc and Margaux – over on the right bank you’ll find of St-Georges and St-Emilion.

Everything is included – food, alcoholic drinks (including, of course, excellent local wine with meals) but also gratuities and excursions. Every day there’s an excellent outing, usually wine-related.

But not always. Our first tour, for example, was a Bunkers Archaeological Tour. A ‘bonkers’ tour or a ‘bunkers’ tour?

Actually it was a tour of the German Second World War bunkers built at Soulac-sur-Mer near the mouth of the Gironde.

These concrete fortifications were so well built that the German soldiers occupying them didn’t surrender until April 19, 1945, a full ten months after D-Day and just a few weeks before the end of the war.

Our next visit was to a privately owned castle – the Château de Cazeneuve, once the residence of King Henry IV and Queen Marguerite.

Everyone’s favourite excursion was to St-Emilion, a small town with a big reputation for fine wine.

It’s a thriving hub, packed with wine shops and good restaurants, with plenty of interesting sights, including the Eglise Monolithe, an 11th Century church that is cut out of the limestone rock.

Beneath it are historic catacombs – next door you can also visit the Ermitage Saint-Emilion, once the home of the eponymous saint.

Bordeaux, for the final two nights, provides the icing on the cake. One of the most handsome cities in France, its good looks relate directly to the wealth generated by the wine business. Cheers to that…

THREE MORE WAYS TO DRINK IN THE SCENERY

The vineyards of Beaujolais, the cellars of Châteauneuf du Pape and the views of Provence – with a glass of rose in hand – are convivial highlights of a new cruise for 2020 enticingly named Flavours of Burgundy and Provence.

Sailing aboard Emerald Liberté from Lyons combines the best of everything – gastronomy, oenophilia, interesting outings and relaxation – all in one indulgent week. On your first morning you’ll watch a clever hound sniff out truffles in secret spots in the forest and then enjoy aromatic snacks made with this precious ingredient. Then get stuck into tasting regional cheeses with an expert on board. Compare the wines of Beaujolais and Châteauneuf du Pape on winery tours and tastings ashore, and why not buy a few bottles to take home?

On board, docked in Avignon (after a gourmet walking tour of the town), Provencale chef Fabien Morreale will create a sumptuous dinner paired with top-class, locally produced wines.

You can work off the extra calories on a guided hike through the vineyards around Tain l’Hermitage (unless you opt for the tempting tour of Valrhona Cité du Chocolat instead), on a bike tour of Lyons – and doing laps in the onboard swimming pool, which has a retractable roof.

Departures are in July and August 2020. The cost, from £2,195, includes flights (or travel via Eurostar) activities and excursions and tips (emeraldwaterways.co.uk).

Sail through the beautiful Douro Valley, its steep river banks striped with vineyards, on Viking’s nine-night Portugal’s River Of Gold holiday. You can try eight port wines in Graham’s 1890 Lodge in Porto, have lunch in a rustic winery and visit Mateus Palace (pictured on Mateus Rosé bottles). From £2,145pp (vikingrivercruises.co.uk).

Fancy sampling malty ‘red’ rotbier in ancient cellars cut into rock under Nuremberg, tasting Bavarian lager brewed by monks for 1,000 years in Welternberg, learning how apricot schnapps is distilled in the Wachau Valley and sipping fruity rieslings in a Viennese vineyard? You can on a seven-night Gems Of The Danube cruise. Fares start at £2,220pp (scenic.co.uk).