Taxi driver, 50, died when he was run over by his own car

Taxi driver, 50, died when he was run over by his own car while helping an elderly customer who desperately tried to stop the cab but couldn’t find the handbrake

A taxi driver has died after his own car rolled down a hill and hit him while an elderly passenger inside desperately tried to find the handbrake.

Father-of-four Brian Braiden, 50, got out of his car to close a customer’s gate after picking her up, but his car rolled down a steep him towards him.

His passenger, an elderly woman travelling to the airport for a flight to Singapore, desperately tried to stop the car but couldn’t find the handbrake.

Grandfather-of-one Mr Braiden died at the scene in Belfast, Northern Ireland, on Monday. He leaves behind a heartbroken wife, Carol, 47.

Taxi driver Brian Braiden, pictured with his wife Carol, died in a tragic accident this week

His sister-in-law, Margaret Kell, 57, said: ‘He would have closed the gate for anyone. That’s just the sort of person he was. He had a heart of gold.

‘He loved his job and loved to meet other people. If anyone needed help in any way he would offer.

‘It was a freak accident. You couldn’t ever imagine something like this happening. It’s unbelievable.

‘We have been thinking “why us?, why Brian?”. He didn’t have a bad bone in his body and was so loving. It doesn’t seem like real life that it has happened.

‘We are all still in shock about it. He got out of his car to shut a gate and never came home. Our hearts go out to that poor lady who tried to save him.

‘We know she did all she could. She looked for the handbrake but couldn’t find it. How can she enjoy her holiday having seen what she saw and heard what she did.’ 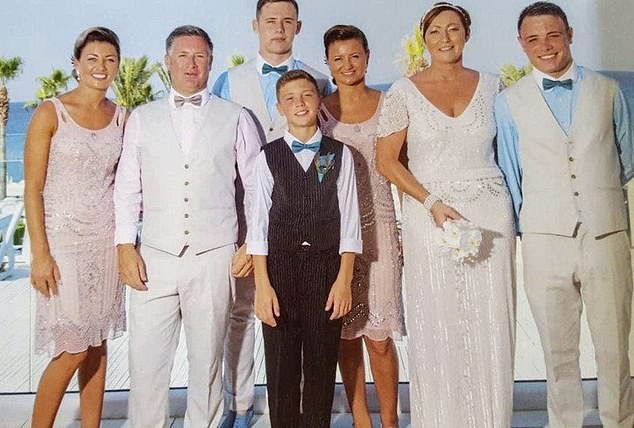 Mr Braiden (second left) and his wife, Carol (second from right), pictured with their four children and grandson at their wedding three years ago in Cyprus

Mr Braiden, who had been driving taxis for 20 years, was described by his family as a ‘devoted husband and grandfather’, who always took the time to tell his children he loved them.

His children Johnnine, Tammie, Ross and Leith, have had their ‘hearts ripped out’ by their father’s devastating death, his sister-in-law said.

Mr Braiden had spoken to his wife Carol, a yoga instructor, just moments before the tragic accident and had just made plans with her for that evening.

The couple have been together since 1998 but married three years ago.

His sister-in-law said the couple were ‘soul mates’ and devoted their lives to providing for the large but close-knit family. 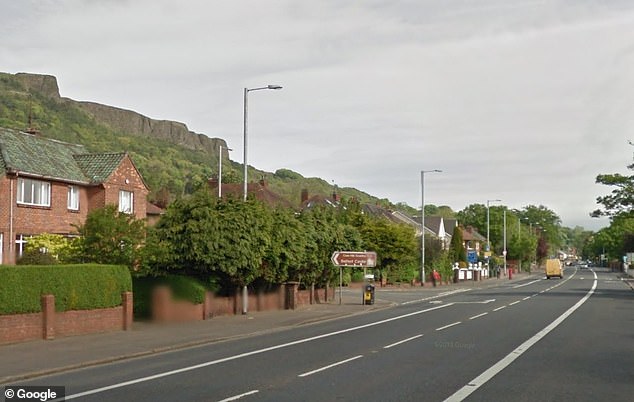 Mr Braiden was picking up a customer on Belfast’s Antrim Road, which is connected to a number of steep roads at the foot of Belfast’s Cave Hill

She said: ‘He was the life and soul of every party and lived to provide for his family. He lived his life like a saint.

‘Carol is a tough girl but she has been torn apart by it. She is trying to be strong for her children but they are devastated.

‘Carol will want to carry on as normal for them. He was the best father ever. He was there for the children constantly and I can’t imagine what they are going through.

‘Brian brought so much happiness to everyone’s life and to everyone he met. He was loved by his whole family and he loved being together with them.

‘Everyone will miss Brian tremendously. He will be remembered for so many reasons and in so many ways.’

A funeral service for Brian will be held on December 5, at Roselawn Crematorium in Belfast.