A teachers’ union has been accused of ‘blocking’ learning by advising against online lessons because they say it does not replicate the in-school experience and puts teachers at risk of an increased workload.

It comes as Britain’s biggest trade unions threatened to tell millions of members not to return to work unless the government introduces policies to ensure workplaces are safe.

Leaders of unions such as Unite, Unison and the General, Municipal, Boilermakers (GMB) have written an open letter to Prime Minister Boris Johnson demanding he guarantees ‘the right policies and practices are in place to make workplaces safe’ in the midst of the coronavirus pandemic.

The National Education Union (NEU) has told teachers that recorded and live-streamed classes should be kept to a ‘minimum’ while schools are closed.

Documents, provided for both primary and secondary educators, added teachers should only give lessons from their home or video call with students in ‘exceptional circumstances.’

The Government is considering plans for pupils to be taught on a ‘week on, week off’ basis in smaller classes when they return to schools – which is being planned for June.

The guidance for primary teachers states: ‘Teachers should not live-stream lessons from their homes, nor engage in any video-calling unless in exceptional circumstances, with the parent.

‘Online lessons are not desirable for primary children as the teacher-pupil interaction is not easily replicated.’

Teachers at secondary schools were told online lessons ‘should be kept to a minimum as the interaction needed between teacher and pupils in schools is high and cannot be easily replicated for a young audience, even at KS4 level.

‘Any school which carries out online lessons must have protocols in place to protect staff and safeguard pupils, and no teacher should be expected to carry out any online teaching with which they feel uncomfortable or in the absence of agreed protocols.’

It added: ‘At this time, teachers should not be expected to carry out routine marking or grading of pupils’ work. To do so would be to disadvantage those who do not have the resources and support available at home to make that fair.’

Parents have complained to schools about the lack of work set by teachers, with some saying it is ‘shocking’ and ‘infuriating’ that educators are refusing to provide lessons online. 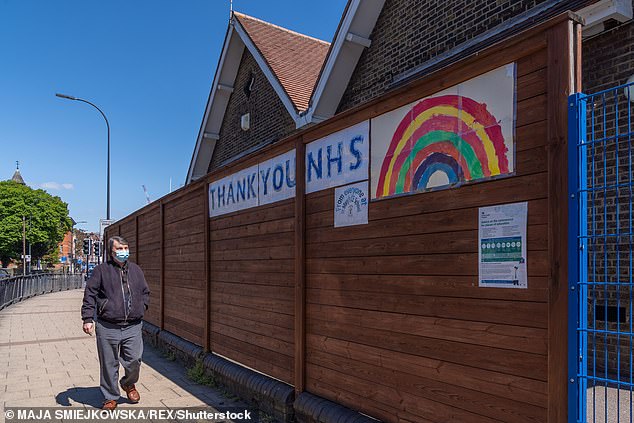 Documents, provided for both primary and secondary educators, added teachers should only give lessons from their home or video call with students in ‘exceptional circumstances’ 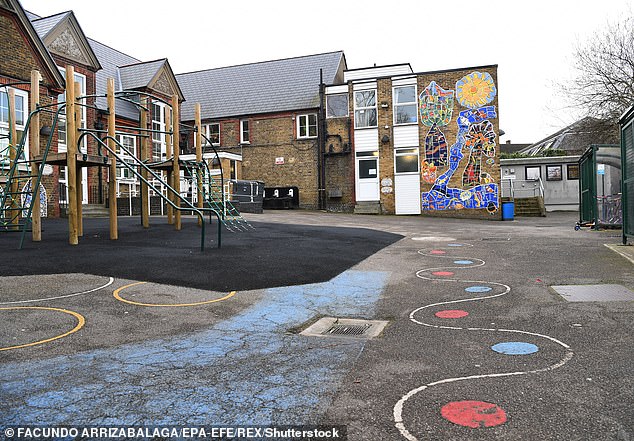 Pictured: An empty playground at Edmund Waller school in South London on March 19

‘Parents are desperately trying to struggle with working from home,’ one mother said. ‘I found the fact that its unions blocking it to be really shocking.’

A headteacher from Brighton explained he had hoped teachers would produce a couple of online lessons per week to keep pupils engaged with their schoolwork.

He told the Telegraph: ‘There is not a huge amount I can do if I am honest. You could try and enforce it but you would never get very far, they would just down tools and say ‘you can’t force me”.

Kevin Courtney, joint general secretary of the NEU, said the guidelines are not about ‘preventing learning’ but were put in place to manage the workload of educators and students.

He said: ‘Arrangements for online learning must also protect teachers’ and childrens’ privacy and ensure children are kept safe while online. The NEU is supporting teachers and families to do the best they can with the resources available to them.’

Students could return to schools on a ‘week on, week off’ basis in new plans being considered by Westminster, the Express reported.

The proposed system would see pupils spend alternating weeks at home and school, with educators in at-risk categories continuing to teach from home.

Class sizes would also be smaller to allow social distancing inside schools, with proposals also suggesting playgrounds would be split into ‘zones’.

It comes as union chiefs have threatened to derail plans to reopen schools on June 1 unless the government accept a range of ‘essential’ safety demands for teachers – including a national ‘test and trace’ system. 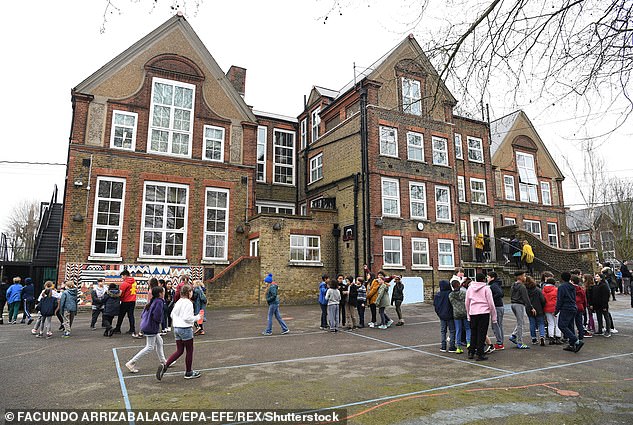 Students could return to schools on a ‘week on, week off’ basis in new plans being considered by Westminster (Pictured: A school in London on March 19) 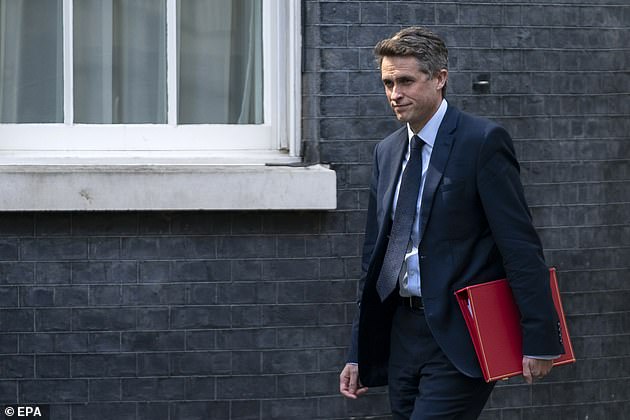 The re-opening of schools in June is expected to form part of Prime Minister Boris Johnson’s address to the nation this evening.

Much of the content of the address is believed to have been briefed to Westminster Lobby correspondents, causing concern among unions.

Among the demands made by teaching unions, is a commitment to provide cash for the deep cleaning of schools as well as adequate supplies of PPE.

Also, unions want the power to close schools delegated to a local level in case of further isolated Covid-19 outbreaks.

Teachers will ‘vote with their feet’ and not show up to work if they are not convinced by the plans, said Geoff Barton, general secretary of the Association of School and College Leaders.

Writing in the Times Educational Supplement, Mr Barton said unless the plans are thorough, teachers – as well as pupils – ‘simply won’t turn up’.

And according to the National Association of Head Teachers just 10 per cent of heads think it is safe to open in the coming weeks.

Education Secretary Gavin Williamson has said schools are set to reopen in a ‘phased manner’ but has not set a date. The Department for Education said this date will be based on ‘scientific advice’.

Last week, an NHS chief warned the Government it should be wary about reopening schools too early as scientists do not fully understand the extent of coronavirus transmission between children.

Meanwhile, Welsh First Minister Mark Drakeford confirmed on Friday that schools in Wales would not be opening on June 1.