REVEALED: Majority of the teens who posed in high school prom photo throwing up the Nazi salute have REFUSED to apologize – while many supporters believe THEY are the victims

After a prom photo of more than 60 high school boys throwing up a Nazi salute went viral, a Wisconsin town remains split on whether the teens should be held accountable for their actions or are victims of a social media attack.

The Baraboo High School teens sparked outrage in November after their class prom photo showed them in tuxedos smiling and laughing while raising one arm or giving the white power hand signal.

One Jewish student Eva Huffaker, 15, tells the Guardian she had hoped for an apology from her classmates following the incident, and says just a couple came to her home to say sorry to her and her family.

But that was just a small majority, as Huffaker says that within the school the boys in the photo are seen as the victims of social media backlash.

A prom photo of about 60 students from Baraboo High School threw up the Nazi salute in a photo that went viral in November. Many of the students refuse to apologize, believing that it was simply a joke that’s been blown out of proportion 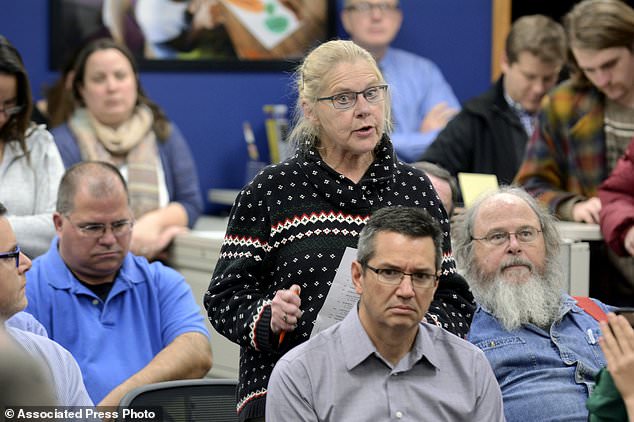 Parents voiced their concerns with the viral image at a Baraboo School Board meeting on November 12, and still remain split on whether the boys should be held accountable for their actions or are victims of a social media attack

‘There were students who immediately after the picture came out went around saying ”We’re Baraboo proud”, kind of implying that they’re not against this,’ Huffaker said. ‘And there have been antisemitic comments.

‘There was an incident where a kid looked at me and he did the white supremacy symbol and then he stood up and did the Sieg Heil.’

The issue of the photo has been a topic during a series of community meetings, with some pushing for a collective apology from the boys and others seeing them as targets from the public to label them white supremacists.

Keri Olson, one of the meeting organizers, is sympathetic to the teens.

‘I can’t imagine being a 17-year-old and having the world looking upon you as the personification of evil,’ she said. ‘This is a community of 12,000 that all of a sudden has been cast in this light around the world. How do you prepare for that? How do you respond to that? It’s been a state of crisis here.’

Huffaker said that many of the students say it was only a joke and the whole issue is being blown out of proportion, something she finds hurtful.

Meanwhile, photographer Peter Gust who took the photo in May but posted it to his website in November, defended the students by saying the gesture was taken out of context.

‘I said, ”OK boys, you’re going to say goodbye to your parents. So wave”’ Gust said. ‘For society to now turn it around and now blame these kids is absolutely wrong.’ 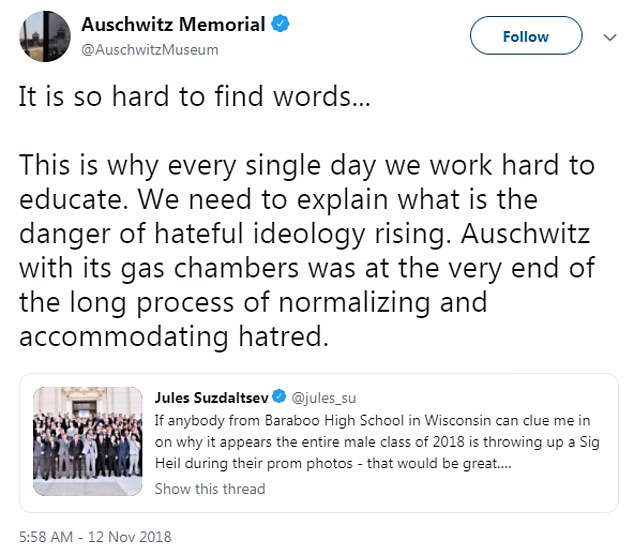 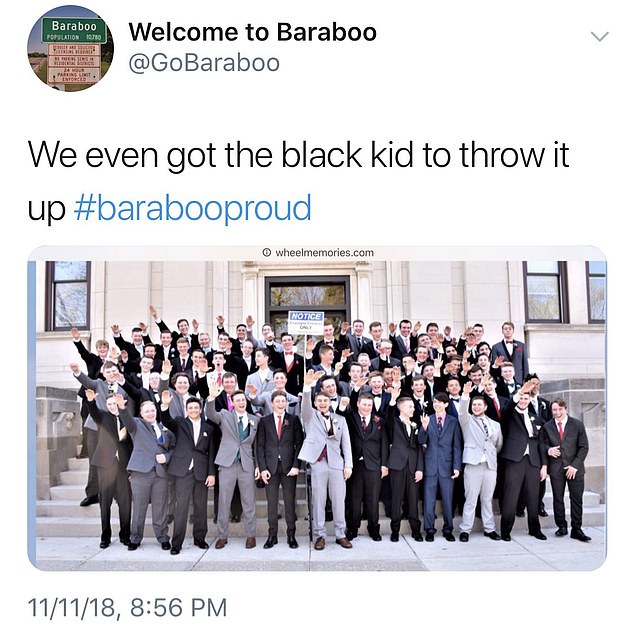 The photo emerged on Twitter in November after being shared by an account called Welcome to Baraboo.

‘We even got the black kid to throw it up #barabooproud,’ the caption on the photo read.

At least one student in the front row was also pictured making the white power hand signal.

‘It is so hard to find words… This is why every single day we work hard to educate. We need to explain what is the danger of hateful ideology rising,’ the tweet read.

‘Auschwitz with its gas chambers was at the very end of the long process of normalizing and accommodating hatred.’

Huffaker said: ‘While they may not know the full effect of how hurtful that gesture is, they know who used it. They know, and a majority of the people in the picture still chose to do it.’ 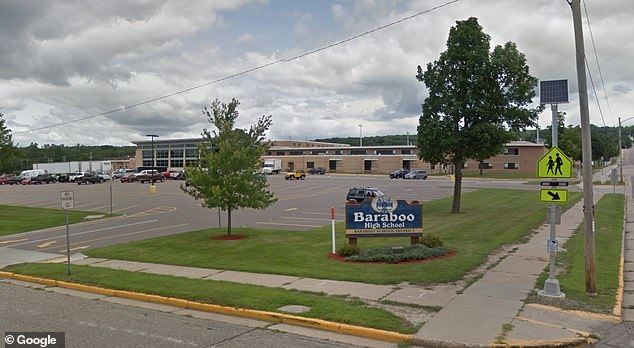 The photo was originally taken in May ahead of the Baraboo High School prom, pictured is the school