Mike Bowen, the vice president of a Texas-based mask-making company, testified Thursday that the Department of Defense gave business to Mexico instead of his company, Prestige Ameritech.

The Berry Amendment requires that the DOD give home grown manufacturers a preference.

Bowen declared that his ‘conscience was clear’ because for 13 years he warned government officials – including both President Obama and President Trump – that the U.S. would face an N95 mask shortage because were now being made abroad.

‘I wrote Barack Obama 20 letters, wrote President Trump and everybody in his early administration,’ Bowen said. 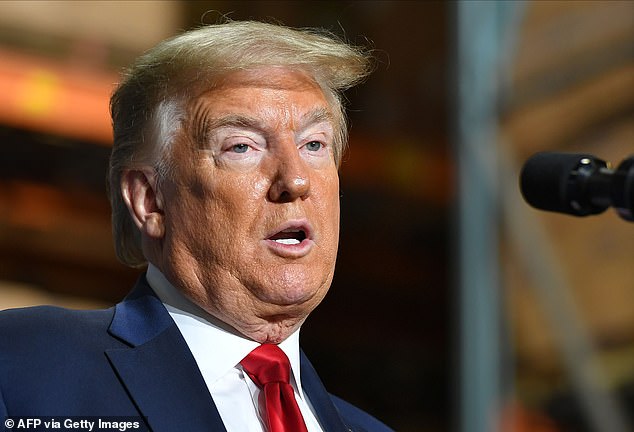 Mike Bowen said he reached out to President Obama and to President Trump (pictured) and early members of his administration, requesting that masks fall under the Berry Amendment, thus ensuring that those bought by the government are American-made

He explained that he asked both presidents to have the DOD follow the Berry Amendment for mask purchases, thus ensuring there would always be an American-made supply.

He name-checked a number of Democratic and Republican government officials including Senate Minority Leader Chuck Schumer, a New York Democrat, and Rick Perry, then the GOP governor of Texas, who he had reached out to warning that in the case of a pandemic there could be a shortage.

In an emergency, Bowen predicted that China and also Mexico would keep their own supplies and stop exporting.

Bowen did find understanding at BARDA – the Biomedical Advanced Research and Development Authority – which was, until recently, led by Dr. Rick Bright, the whistleblower who testified before the same House panel earlier Thursday.

BARDA, the Health and Human Services Agency charged with developing countermeasures – like vaccines – for bioterroristic threats and pandemics, has no buying power, however.

‘I thought of them as brothers in arms, I knew they couldn’t buy my products, but they were the only people who believed it,’ Bowen testified, speaking of the coming mask shortage.

Rep. Brett Guthrie, a Kentucky Republican, had asked why Bowen had been reaching out to Bright, who was attacked repeatedly on Thursday by GOP lawmakers and President Trump and his former boss Alex Azar, the HHS chief, for his whistleblower testimony.

‘You got it all wrong. I wasn’t looking for business, I open my email, I don’t need your business, my phones are ringing off the wall,’ Bowen snapped. He said he reached out to Bright and the BARDA team to issue a warning.

Bright, in his own testimony, recalled what Bowen had said. 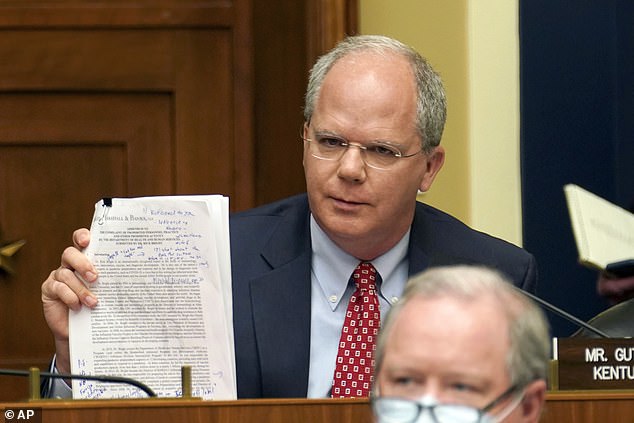 Rep. Brett Guthrie, a Kentucky Republican, got an earful from mask manufacturer Mike Bowen, who said his conscience was clear after reaching out to leaders on both sides of the political divide to warn them of a potential mask shortage since supplies weren’t American made

‘I’ll never forget the emails I received from Mike Bowen indicating that our mask supplier, N95 respirator supplier, was completely decimated and he said “we’re in deep s***, the world is, and we need to act,”‘ Bright told the same House members Thursday morning. ‘And I pushed that forward to the highest levels I could in HHS and got no repsonse.’

Bowen, too, spoke of being ignored.

Guthrie apologized, saying that he was just trying to figure out who Bowen had talked to. ‘I apologize if I offended you,’ the lawmaker later said.

Bowen also talked about why he had said in an email that he would only fully ramp up mask production if the U.S. government retained him as a mask dealer post-pandemic.

‘The U.S. government has never bought from me except during a pandemic,’ Bowen said.

He said the point that he was trying to make was, ‘Give me business during peacetime so I can survive to help you during a pandemic.’

HHS had tried to etch out a contract with Bowen’s company in order to utilize additional equipjment Bowen had obtained from China, but the witness explained that it wouldn’t be worth the pain if the commitment from the government didn’t last.

‘I told them it’s going to take three or four months, they only want masks through the end of the year,’ Bowen said. ‘So I would have to hire 100 people, train 100 people and then fire them at the end of the program.’

He also testified that he had offered the government use of the equipment that he had gotten from China with no strings attached.

Asked about not using those four machines, by Rep. Buddy Carter, a Republican from Georgia, Bowen went off.

‘Listen, we’ve gone from one shift to three, 80 people to 200, we’re making four times the products we made. We’re making over a million masks a day, don’t you look at me and act like I’m sitting on my ass and not firing up four machines,’ the witness told Carter. ‘It’s not like just turning on a switch.’

When Carter tried to interject, Bowen talked over him.

‘Listen, I sat and watched my business partner cry when he had to lay those people off, we’re not doing that again,’ Bowen said.

He had hired up to make masks for the government in 2010, only to have to lay off those workers, Bowen said.

Carter reiterated that Bowen would need a government contract to fire those machines up now.

Bowen also offered Carter use of the machines.

At one point in the hearing, Bowen took a minute to defend Bright, the previous witness.

‘Can I point out something,’ he asked at one ponit. ‘I watched all of this in a room a little while ago. It seemed that everybody was beating up on Dr. Bright was a Republican and everybody who was defending him was a Democrat.’

‘I’m a Republican, I voted for President Trump and I admire Dr. Bright,’ he said, though later added that he didn’t identify as a ‘Trump supporter’ as he’s been critical of the president since the 2016 election.

As the hearing was winding down, Bowen apologized if his frustrations had gotten the best of him. Speaking to Rep. Annie Kuster, a New Hampshire Democrat, he talked about his family and how he lost his oldest child to the same brain cancer that killed Beau Biden, Joe Biden’s son.