The best places in the UK to swim outdoors

What’s your favourite item of clothing? Until recently, I probably would have picked a dress. But, over the past year, the garment about which I have felt most sentimental has ended up being a cheap, plain swimming costume.

Yes, I am one of the recent converts to ‘wild swimming’. Its proponents can, admittedly, be annoying. One semi-serious survey of swimmers at London’s Tooting Bec Lido even found a proportion who said it was better than sex.

For me, it has become one of the most important tools in my attempt to manage a mental illness that first struck three years ago following a serious personal trauma.

‘Just as running has gone from being something you did only if you were in the school cross-country team, to a mainstream pursuit, why shouldn’t swimming — wild, cold or otherwise — have its moment, too?’ writes Isabel Hardman

Indeed, there is an exciting body of emerging research that suggests cold-water swimming could help control our ‘fight-or-flight’ instinct. It could also reduce inflammation, which, medics suspect, may have a part to play in depressive illnesses.

After even a short dip, I feel calmer and more awake. I have felt my body grow stronger, not just from the physical action of pushing my way through the water, but from the cold winter swims I love the most.

These need careful acclimatisation, and you can spend only a few minutes in water that’s just a couple of degrees above freezing, but the effect of swimming surrounded by ice seems to last a few days. It’s the best shock therapy out there.

The Outdoor Swimming Society says its follower count has climbed to more than 70,000 since its inception in 2006, when it had just a few hundred members. This is no longer a hobby for eccentrics.

Few swimmers will know even the names of the plants, birds and insects they encounter on their watery adventures, but wild swimming brings us back to nature.

I love how great-crested grebes surface suddenly in front of me in the Serpentine in London’s Hyde Park and damselflies hover like glow sticks by my arms.

Some scoff at the trendiness. Isn’t this what outdoor types have been doing for years, with an Instagram-friendly rebrand? Well, perhaps.

I prefer to say I’m a ‘cold-water swimmer’, for the sole reason that I find fashionable people annoying.

The point is that this isn’t the same type of swimming on which we’ve been brought up. There are no overheated, echoey, chlorinated indoor pools.

Just as running has gone from being something you did only if you were in the school cross-country team, to a mainstream pursuit, why shouldn’t swimming — wild, cold or otherwise — have its moment, too?

Here are some of the best places in the UK to swim outdoors . . . 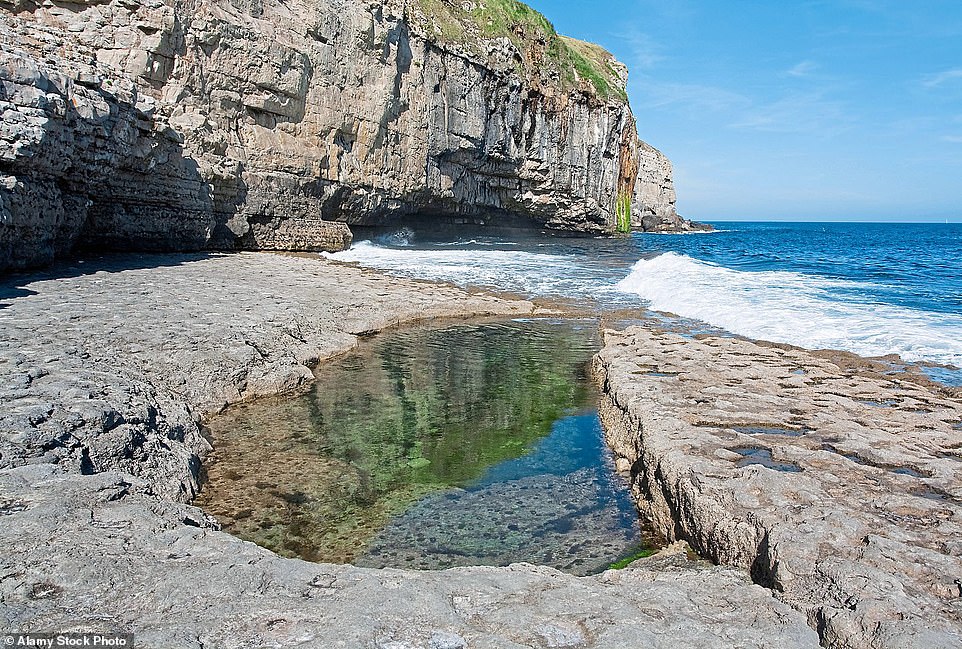 Dive in: Dancing Ledge in Dorset is a tidal bathing pool. It’s important to note you can only swim here at low tide

You’ll enjoy a lovely walk through wildflower meadows and a scramble down steep rocks to the tidal bathing pool at Dancing Ledge, Dorset — blasted out of the rock decades ago for the use of local prep schools. You can swim only at low tide.

Where is it? Set off from the National Trust’s Dancing Ledge car park (BH19 3LD) and head towards the sea, crossing a stile when you reach the cliffs at OS grid reference SY 99782 76885.

Look out for: Peregrine falcons soaring above you.

Where’s the pub? The Square And Compass at Worth Matravers. It feels as old as its Fossil Museum.

Dos and don’ts before you take a dip…

Friendly swimmers’ group The Wild Ones organises regular dips in Edinburgh. Enjoy a Thermos of tea or coffee to warm up afterwards.

Where is it? Wardie Bay swims start by the Eastern Breakwater (EH5 1ET), while Portobello swims meet at the Swim Centre (EH15 2BS).

For dates and times, join The Wild Ones’ group at facebook.com/ groups/wildonesedinburgh

Look out for: Seals popping up in the water to peer at you.

Where’s the pub? The Old Chain Pier on nearby Trinity Crescent serves good fish and chips.

Where is it? Beacon Tarn (OS grid reference 27424 90027) is just west of Coniston Water. Park in laybys at Water Yeat (LA12 8DJ) or Blawith and follow the marked footpath west over the fells. It’s a half-hour walk through the common land above Coniston.

Look out for: Sheep, and plenty of them, many of which seem to laugh at you as you enter the water.

The Thames is so clean and busy with wildlife as it flows through Bourne End in Berkshire. If you fancy an adventure, you can enter the water at Cock Marsh and swim downstream to see Cliveden House — the setting of the Profumo Affair.

Where is it? You can park at Cock Marsh near Cookham, (SL6 9TJ) and saunter for around five minutes over the water meadow to the river.

Look out for: Pleasure boats.

Where’s the pub? The Bounty is right beside the water at Cock Marsh.

Chalk streams are special: so clear and cool. One of the loveliest is the Little Ouse, near Santon Downham in Suffolk. Swim for miles or bumble along in Thetford Forest.

Where is it? Drive to St Helen’s picnic site in Santon Downham, (IP27 0TJ) and enter the water via the footbridge.

Look out for: Everyone else having the same idea.

Where’s the pub? The social hub is the Breckland Club, open four nights a week. 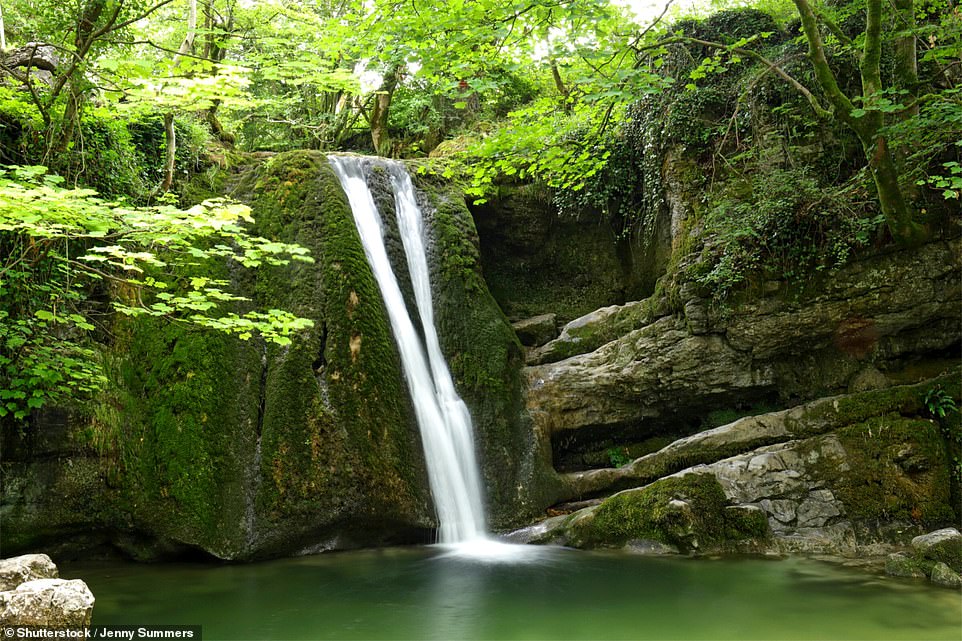 Janet’s Foss in Yorkshire is a waterfall plunge pool in a dramatic amphitheatre famous in the wild swimming world. Even in winter, you’re likely to find a few brave souls splashing about in the deep water.

Where is it? There’s a circular walk starting from Malham, (BD23 4DL), which takes you past Malham Cove’s sublime cliffs and along a track to reach the waterfall.

Look out for: Overexcited swimmers skinny-dipping.

Where’s the pub? The cosy Buck Inn in Malham will do very nicely.

Downstream from Staverton Weir in Devon, there is a tree to jump from or you can swim for a good distance once you’re in the clear river.

Where is it? Near Dartington. Park at Staverton Bridge (TQ9 6FE) and walk down a track to the river.

Look out for: Spots highlighted in Alice Oswald’s Dart — which charts the voices of people living and working beside this river.

Where’s the pub? The White Hart at Dartington has superb seasonal food.

Snowdonia is full of beautiful stretches of clear, blue water in lakes, old quarries and waterfall pools. Climb Snowdon and cool off in the Afon Cwm Llan waterfalls on the way back down.

Where is it? Reach the pools by parking near Gwynant chapel cafe (LL55 4NL) and walking along the Watkin Path.

Look out for: Walkers wishing they’d brought their swimsuits. 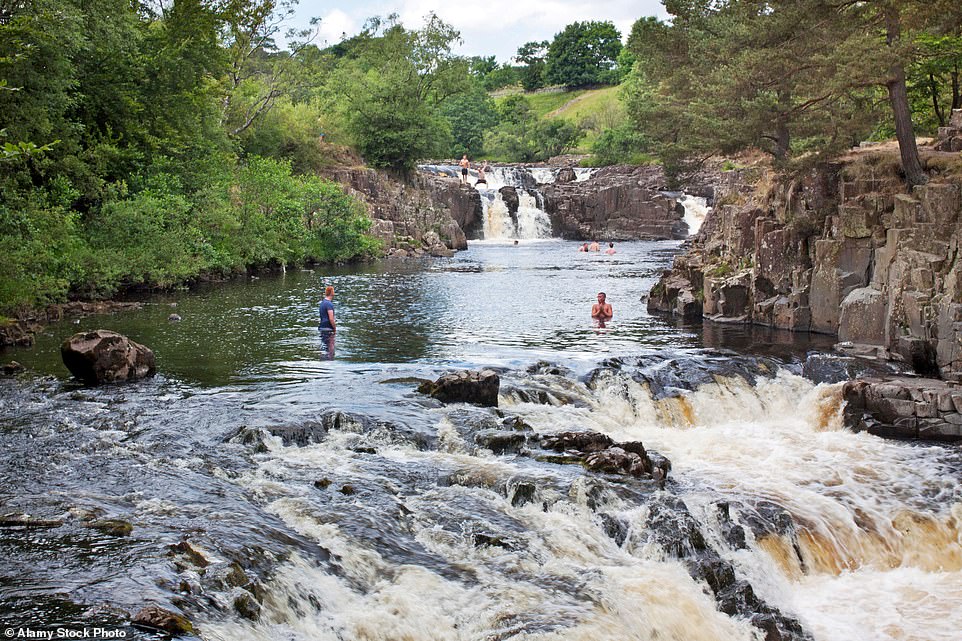 Wild thing: Low Force is a dramatic waterfall and deep pool in County Durham on the River Tees

Low Force is a dramatic waterfall and deep pool in County Durham on the River Tees.

Despite its name, it is only safe in summer when the waters aren’t raging. But it’s a fabulous swim and good for jumping in, if you’re that sort of swimmer.

Where is it? Set off on a five-mile round walk from Bowlees Visitor Centre (DL12 0XE).

Look out for: The nationally important wildlife, including wading birds, and beautiful wildflower meadows.

Where’s the pub? The High Force Hotel is on the walk and serves food, welcomes dogs and runs outdoor activities. 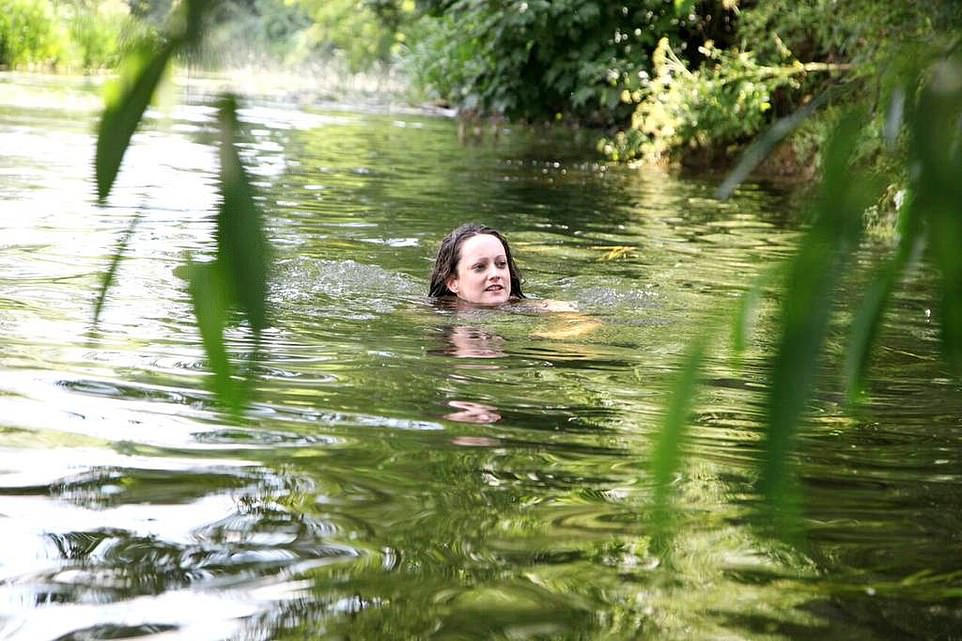 ‘If you’re a strong swimmer, the Thames upstream from Richmond Lock is marvellous and much cleaner than you would expect’

If you’re a strong swimmer, the Thames upstream from Richmond Lock is marvellous and much cleaner than you would expect.

Try the bathing steps at Marble Hill House and enjoy the riverside flowers that often end up underwater when the tide is high.

Where is it? Walk through Marble Hill Park (TW1 2NL) to the river. There are benches by the steps into the water.

Look out for: People who think you fell in. Why else would you be swimming in the Thames?

Where’s the pub? The White Cross is so close to the river that it regularly ends up being flooded by it during high tide.