The cruise where you float above the river! See the stunning Irrawaddy in Myanmar from every angle

The cruise where you float… above the river! See the stunning Irrawaddy river in Myanmar from every angle on balloons, kites and boats

By Robert Powell For The Mail On Sunday

Having to get up at 5am was soon forgotten as our hot-air balloon took flight over the temples, pagodas and stupas in Myanmar.

About 20 other huge and colourful balloons were floating up all around. It was the start of the latest wonderful day on our Scenic Aura river cruise.

After a smooth landing we returned to our boat for coffee before setting off for Mount Popa on one of the many excursions on hand.

High life: A hot air balloon soars over the temples of Myanmar. The mystical Irrawaddy River runs through the country

Mount Popa is a volcano 4,600ft above sea level, said to be home to the 37 most powerful spirits, called nats, of Myanmar.

The monastery of Taung Kalat is perched on the top of Popa’s southern flank and we were given the choice of climbing the 800 steps to the monastery or having a drink at a resort on a hill overlooking the mountain.

We opted for the climb, which has to be done in bare feet. At the top a cold beer and great food helped us forget our sore feet and we enjoyed the view before heading down to the town of Bagan.

That’s where we had another climb, this time into horse-drawn carts for a tour of the temples we had seen from the air previously. Trotting down country lanes with golden pagodas and stupas around every corner was the perfect end to a fabulous day.

The next day we continued our journey down the Irrawaddy river, enjoying lunch and a lecture on the past, present and future of Myanmar. After that we put in at a sandbank and were handed kites. We flew them along the river bank while the crew set up our sunset barbecue. And then something magical happened: a local band joined us to play at our impromptu party.

Those two events stand out on this 16-day journey. The river runs the length of Myanmar, and as the great civilisations of this country rose and fell by the banks of the river, a cruise is the best way to explore the history. 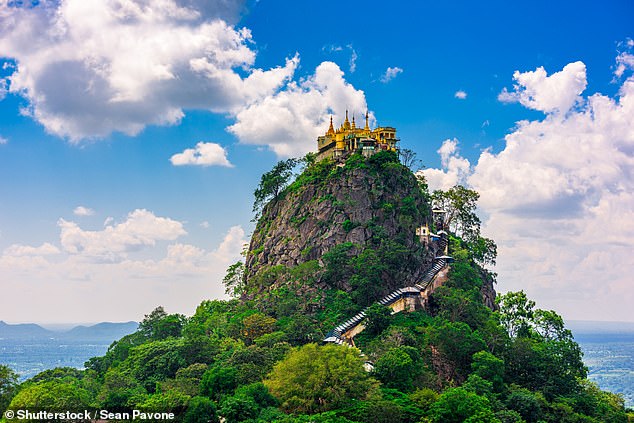 Mount Popa, pictured, is a volcano 4,600ft above sea level, said to be home to the 37 most powerful spirits of Myanmar

Our trip began in Yangon, formerly Rangoon, where we had dinner at the Strand Hotel – built in 1901 and associated with writers Somerset Maugham, Rudyard Kipling and H. G. Wells, who all stayed here.

Here we boarded Scenic Aura, an exceptionally luxurious ship, with just 22 balcony suites hosting 44 guests with an almost 1:1 crew-to-guest ratio. Before dinner we discovered a pool, library, wellness centre, lounge with a well-stocked bar and Bamar Dining room where we ate well every night.

The days on board shot by, a constant stream of new experiences, including travelling by horse and cart to Thayet Golf Club, the oldest in Myanmar. My wife Babs and I also loved walking into Yandabo, where the peace treaty of the first Anglo-Burmese War was signed. Now it is a village famous for its pottery, which we saw being made.

The walking tour of Mingun was also enlightening. Here we found King Bodawpaya’s uncompleted stupa. Apparently while it was being built the king’s astrologer told him that he would die upon completion. Work was immediately halted. 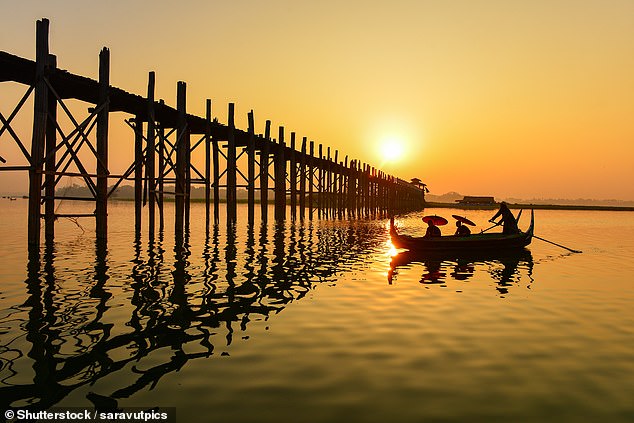 The U-Bein Bridge in Mandalay, pictured, is reputed to be the world’s longest and oldest teak bridge

Mandalay was our final destination where we visited silk workshops and U-Bein Bridge, reputed to be the world’s longest and oldest teak bridge. There we climbed into tiny local boats, sampans, to be taken on a cruise of the lake and waited for the sun to set.

The silhouette of the bridge, with Lowry-type figures walking along it and the sun setting behind, was unforgettable. And just when we were thinking it couldn’t get better, it did.

A sampan with some of our crew from Scenic Aura drew up alongside and handed us glasses of champagne. That summed up our whole, wonderful experience exploring this magnificent river.