A nourishing diet is a vital part of any patient’s recovery — but too often meals fed to seriously ill patients in hospital fail to provide basic standards of nutrition, as Good Health found in this experiment.

Furthermore, as our grim pictures show, many do little to whet the appetite either.

The standard of hospital catering has come into the spotlight again following the recent deaths of six patients from listeria contracted after eating hospital sandwiches and salads.

That was followed last month by revelations that some patients are eating hospital food initially cooked up to a year earlier in a factory, before being frozen and shipped to hospitals as far as 650 miles away.

Patients being treated for a wide variety of health issues in hospitals up and down the UK photographed their evening meal within a three-day period at the beginning of this month. Above: A meal photographed at Crosshouse Hospital, in Ayshire, Scotland

This, say campaigners, is symptomatic of a lack of importance placed by many hospitals on the vital role that food can play in health and recovery.

Indeed, ‘pigswill’ and ‘unfit for dogs’ are just some of the criticisms of hospital food recorded by patients, according to the Campaign for Better Hospital Food, conducted by the charity Sustain.

‘Hospital food isn’t up to scratch,’ says Rob Percival, head of food and policy at the Soil Association, which has developed awards for hospital catering.

‘There is currently no monitoring of hospital food standards and no checks to ensure that hospitals are making it easy for patients, staff and visitors to eat well.’

A recent poll by Unison, the health workers’ union, found that even hospital staff would not touch some of the dishes served up to patients.

But can the food really be that bad? To find out, we asked patients to send details of their meals for a snapshot survey of the state of hospital food around Britain.

Patients being treated for a wide variety of health issues in hospitals up and down the UK photographed their evening meal within a three-day period at the beginning of this month.

The meals were then assessed by Hannah Whittaker, an NHS dietitian and a spokesperson for the British Dietetic Association.

She explains: ‘It’s very important for patients to get a good balance between protein for repair and growth, carbohydrate for energy, and vegetables or fruit for vitamins and minerals and fibre.

‘In general, for a main meal, a quarter of the plate should be protein, a quarter veg and half carbohydrates.

‘Presentation and portion size is also really important as it can heavily influence whether a patient will attempt to eat their meal.’

While some hospitals are offering patients tempting and nourishing meals, others are serving up food so poor that patients would rather go hungry.

We also found that some meals the patients thought awful were nutritionally spot on — although that matters little if patients are unable to bring themselves actually to eat the food.

So look for yourselves and see if you can spot the home-cooked food from the meals that have been shipped in and reheated. The answers may surprise you.

She suffers from Crohn’s disease, an inflammatory bowel disease, and has difficulties digesting many foods.

Hospital catering: All meals are cooked on site. Patient surveys conducted by the hospital show 85 per cent satisfaction with the food. 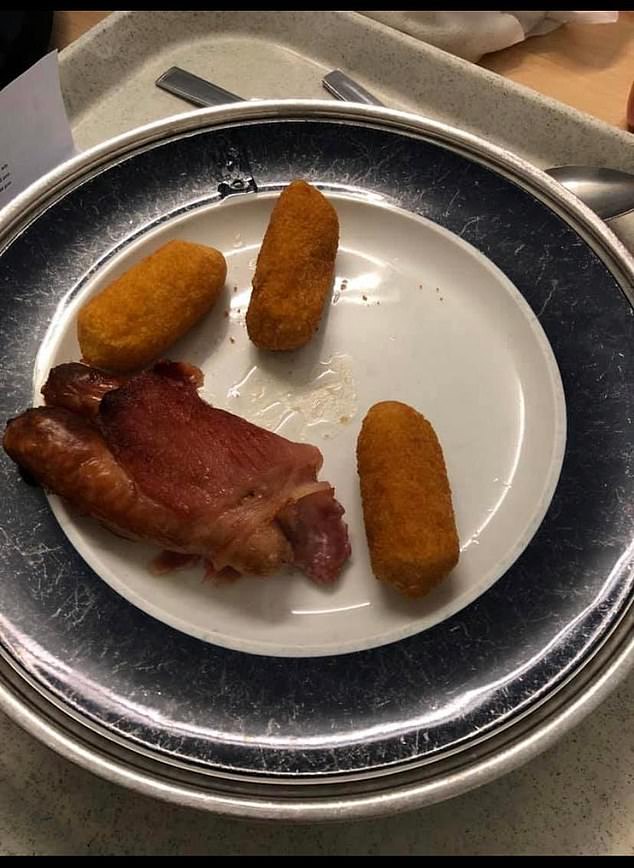 Sausage, bacon and potato croquettes, which was served to Crohn’s  disease sufferer Jaclyn Chidwick, 31, at Crosshouse hospital in Ayrshire, was branded greasy, fatty and unappealing by our expert dietician Hannah Whittaker

Patient’s verdict: Having Crohn’s makes it a challenge to eat properly as so many foods cause flare-ups.

On one occasion I had to ask for a plain baked potato just so I could eat something. It was awful.

Expert verdict: Greasy, fatty and unappealing, and nutritionally not beneficial to any patient.

There are no vegetables.

Patients with breathing difficulties need more calories because they have a higher respiration rate but this meal doesn’t look adequate for this either.

The patient: Nia Williams, 37, a singer, lives in Caerphilly near Cardiff. She spent two nights in Royal Gwent Hospital, Newport, with a head injury. 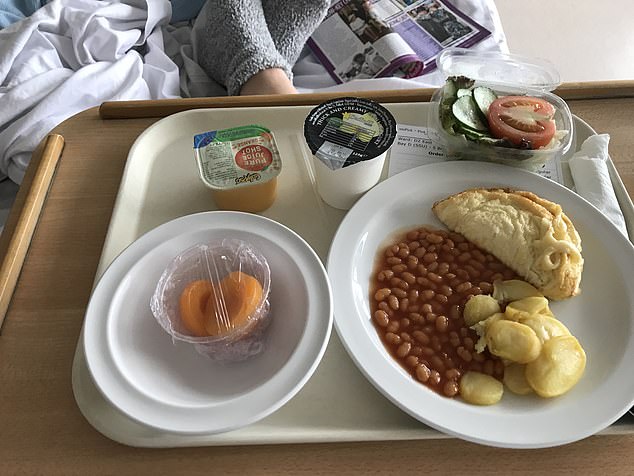 Hospital catering: Meals are prepared in-house. The hospital has a five-star rating from the Food Standards Agency.

Patient’s verdict: A nurse came round each morning and offered a number of options. Food was made to order and was very tasty.

Expert verdict: This meal offers a good variety of protein, carbohydrates, veg and fruit, though the egg looks a little rubbery and portions may be too large for a patient with a small appetite.

The patient: Chloe Edges, 33, lives in Grimsby and runs cookery website feastgloriousfeast.com. She was in Diana, Princess of Wales Hospital, Grimsby, for eight days to investigate her persistent headaches.

Hospital catering: Prepared by outside catering firm Apetito and reheated by hospital staff on the ward. In 2018 the food got a 96 per cent rating, according to the national external audit, the Patient-Led Assessments of the Care Environment (PLACE). 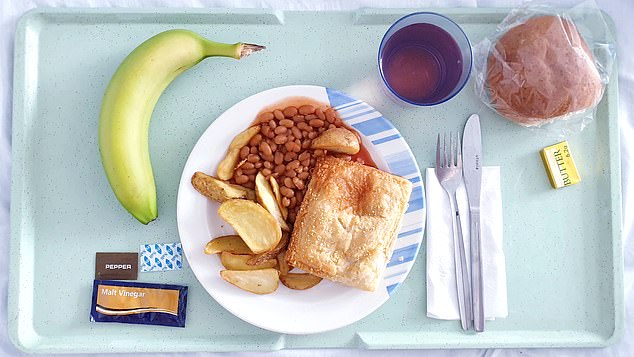 This meal consisting of beans, a pasty and potato wedges was served to Chloe Edges, 33, at Diana Princess of Wales Hospital, in Grimsby

Patient verdict: This was one of the best meals I had in the hospital. We had a menu to choose from at every meal and those beans were supposed to go with a jacket potato but I asked for them with my pasty instead. I chose a banana for dessert but it was too green to be edible. Nearly everything I ate was tasty but it didn’t always look great, especially the stews.

Expert verdict: This looks great. The wedges are crispy, there’s an adequate portion of beans, which count as one of your five-a-day, and the pasty, while possibly off-puttingly large for someone with a small appetite, helps make the meal energy-dense.

The patient: Simon Cook, 38, is a fireman. He was in Royal Glamorgan Hospital, South Wales, for three days for sinus problems. 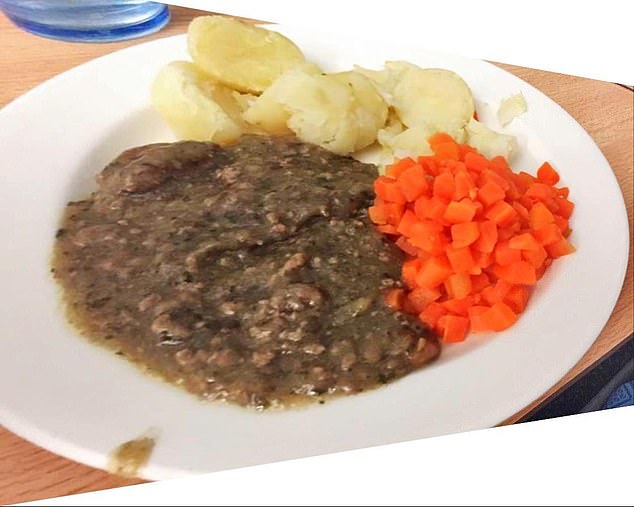 Patient’s verdict: The food was very hit and miss and seemed to vary greatly in standard. This particular meal wasn’t very nice. The food on other days was better and sometimes quite enjoyable. Dessert on this particular day was a tub of ice cream.

Expert verdict: While this is a balanced meal nutritionally, it looks to be very poor quality. The potatoes look dry and overcooked, the mince looks like slop and the carrots look plastic. Its appearance might be off-putting for anyone with a small appetite or experiencing nausea.

With vanilla sponge and custard

The patient: Katie Brown, 30, a housewife from Widnes, was in Warrington Hospital for four days for keyhole surgery to remove part of her ovaries. 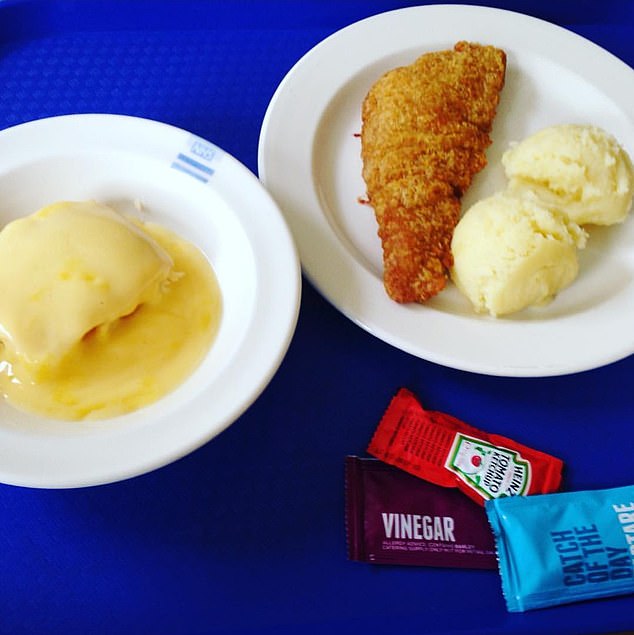 Patient’s verdict: The food generally was bland and tasteless. The texture of the fish was like chewing dry pieces of rubber.

The mash potato was Smash — and I’d actually ordered fish, chips and peas but received this.

I ended up having a sandwich from Subway because the meal was inedible. I think the food would be classed as healthy but I couldn’t eat it.

Expert verdict: Again, this meal has no vegetables, which are an important source of minerals, vitamins and roughage.

What’s more, there are surprisingly few calories in the main meal — around 150-200 from the fish and 100 from the mashed potato, I would estimate.

The pudding (the custard looks lumpy) seems large and could cause a spike in blood sugar levels, which would not be good for a patient with diabetes, for instance.

The patient: Ingrid Lewis, 71, lives in Cuffley, Hertfordshire. She was in Barnet General Hospital for five days after being admitted as an emergency and fitted with a pacemaker. 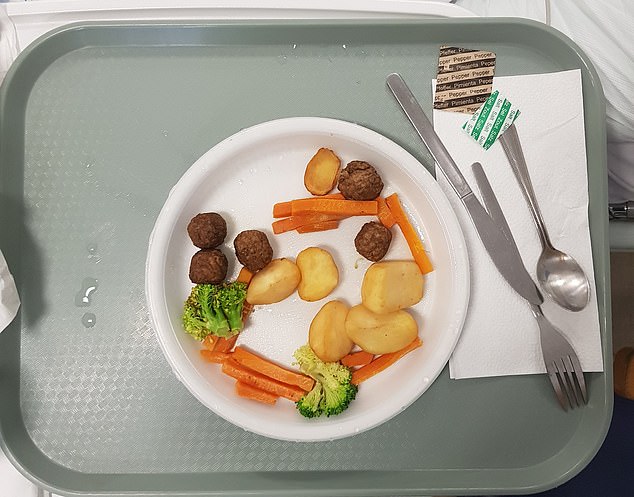 Patient’s verdict: The food was quite awful. I felt very unwell and wanted something light and nutritious but just looking at this made me feel ill!

The meatballs were beyond bad, the broccoli was burnt and the potatoes hard. Another day I had a cheese sandwich which was pre-packed and bland.

It is adequate nutritionally — protein, vegetables and carbohydrate — but the vegetables look as if they’ve been overcooked and the presentation is very poor.

I’m not surprised the patient found it inedible.

The patient: David Demetriou-Smith, 30, a social worker, was in Leighton Hospital, Cheshire, for two days with flu-like symptoms following a trip to Uganda. 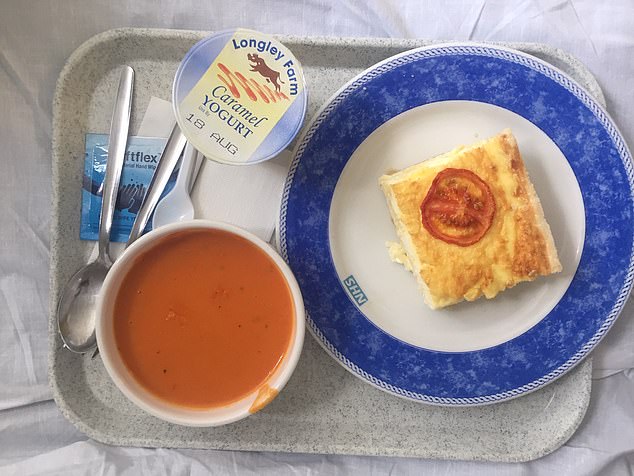 Tomato soup and quiche was served to David Demetriou-Smith, 30, at Leighton Hospital, Cheshire

Patient’s verdict: The food was fantastic. You had several choices for lunch and dinner, served hot by catering staff. I felt well fed and nourished.

Expert verdict: The quiche looks rubbery, but the portion size is suitable. It’s nutritionally balanced with protein and carbohydrate and one of your five-a-day in the soup. I’d just question how high it is in salt with the cheese and the pastry.

The patient: Derek Becket, 79, lives in Milford Haven, Pembrokeshire. He has been in Withybush Hospital, South Wales, for three weeks. He had his right leg amputated in June and is undergoing further tests. 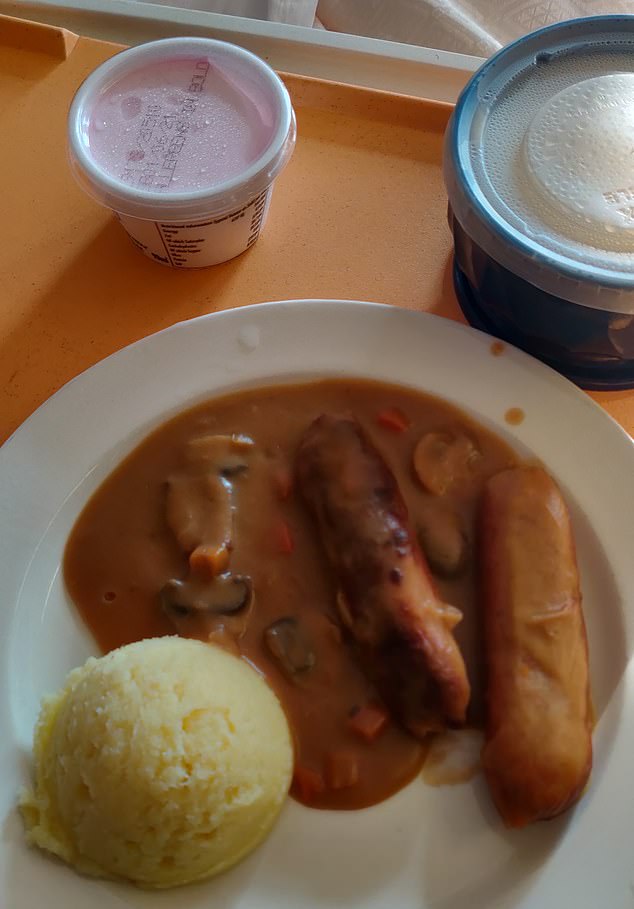 Sausage casserole with cauliflower and apple soup and ice cream was served to Derek Becket, 79, at Withybush Hospital in South Wales

Patient’s verdict: I lost a lot of weight over the past few months during various hospital stays as I just didn’t like the food.

I would eat vegetable soup but I wouldn’t have cauliflower and apple.

The casserole had mushrooms in and I don’t eat mushrooms, and the scoop of potato is like being at school.

Expert verdict: This meal is nutritionally balanced, with protein in the sausages, vegetable and fruit in the soup and carbohydrate in the ice cream.

Some people would love this combination, but it’s possibly too ambitious in terms of the flavours they’ve chosen to tempt elderly patients.

Such patients usually need simple, home-cooked food in small portions to encourage them to eat.

The patient: Dean Moyce, 57, a retired security worker, lives in Brockley, South London. He was in University Hospital, Lewisham, for six weeks suffering from sepsis. 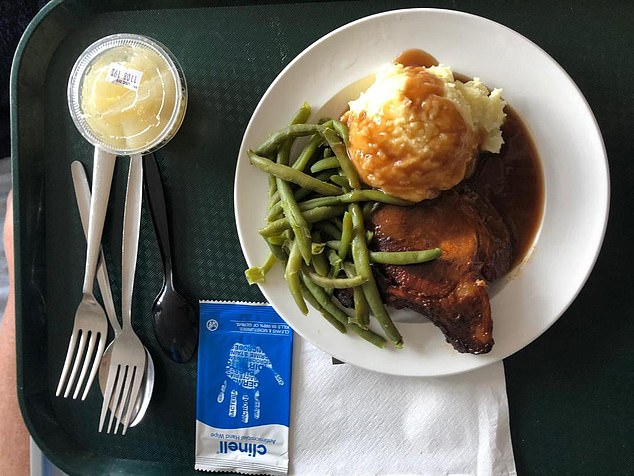 Pork chop, mashed potato and green beans with stewed pears as a dessert was served to Dean Moyce, 57, at University Hospital in Lewisham

Patient’s verdict: This meal with a pork chop was one of the better ones, although the pears were hard. Overall, I’m sorry to say I didn’t feel well fed. A lot of the food was inedible.

Expert verdict: Presentation is perfect, and this good, balanced meal appears to be cooked well and looks very appetising.

Tinned fruit is perfectly acceptable so long as it’s in fruit juice and not syrup.

The patient: Sarah Dunkley, 32, a stay-at-home mother from Dartford in Kent, was in Darent Valley Hospital in Dartford for three days after a Caesarean following the birth of her second child. 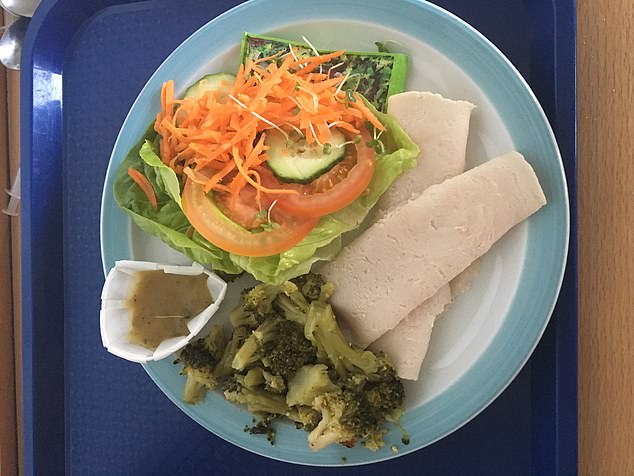 Turkey salad was served to Sarah Dunkley, 32, at Darent Valley Hospital in Dartford

Patient’s verdict: The food was poor. I’m diabetic and follow a low-carb diet, so my choices were incredibly limited.

My husband ended up bringing me meals in for breakfast and lunch.

For dessert, I was offered a choice of sponge cake with custard or ice cream, but I had to refuse both as it wasn’t in line with my low-carb diet.

Expert verdict: A nice salad, although the turkey looks as though it’s processed and high in salt, and the broccoli looks overcooked, which means it will have lost some of its nutrients.

The portion size is adequate but some boiled potatoes or pasta to provide carbohydrates would have been a good addition.