The Obamas are soaking up everything France has to offer — including a meetup with famous rock stars.

Barack and his wife Michelle were joined by their daughters Malia and Sasha while enjoying a lunch date with U2’s Bono and The Edge on Friday afternoon, just one day after it was reported their next vacation stop is George and Amal Clooney’s Italian villa on Lake Como.

The 57-year-old former president and his family were seen strolling through the medieval city of Èze as they made their way to the two-Michelin-starred restaurant La Chèvre d’Or.

A-list lunch: Barack and Michelle Obama enjoyed lunch with U2’s Bono and The Edge (not pictured) in  Èze, France, on Friday 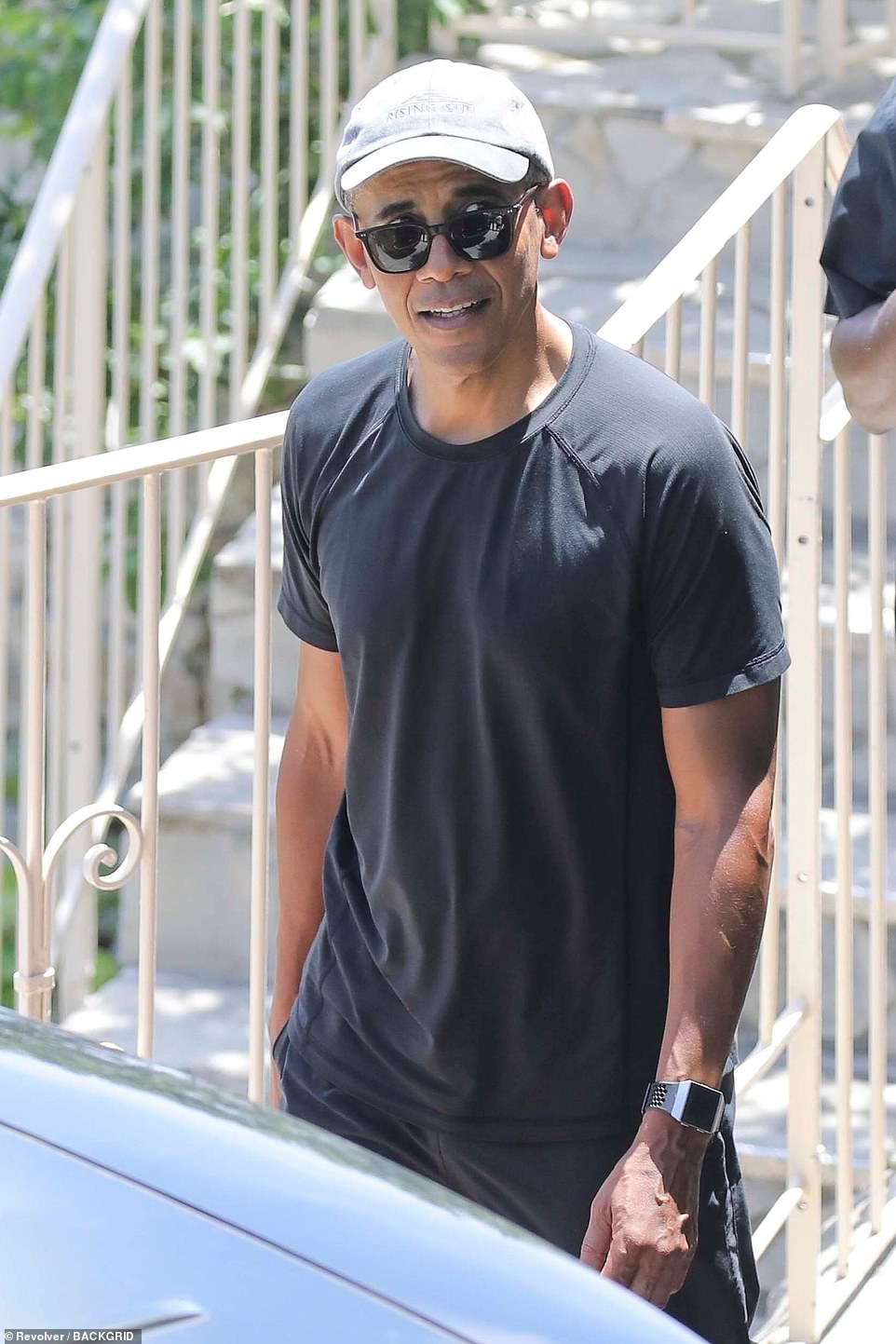 Casual Friday: Barack, 57, looked relaxed in a black T-shirt and athletic pants, which he paired with a gray baseball cap, sunglasses 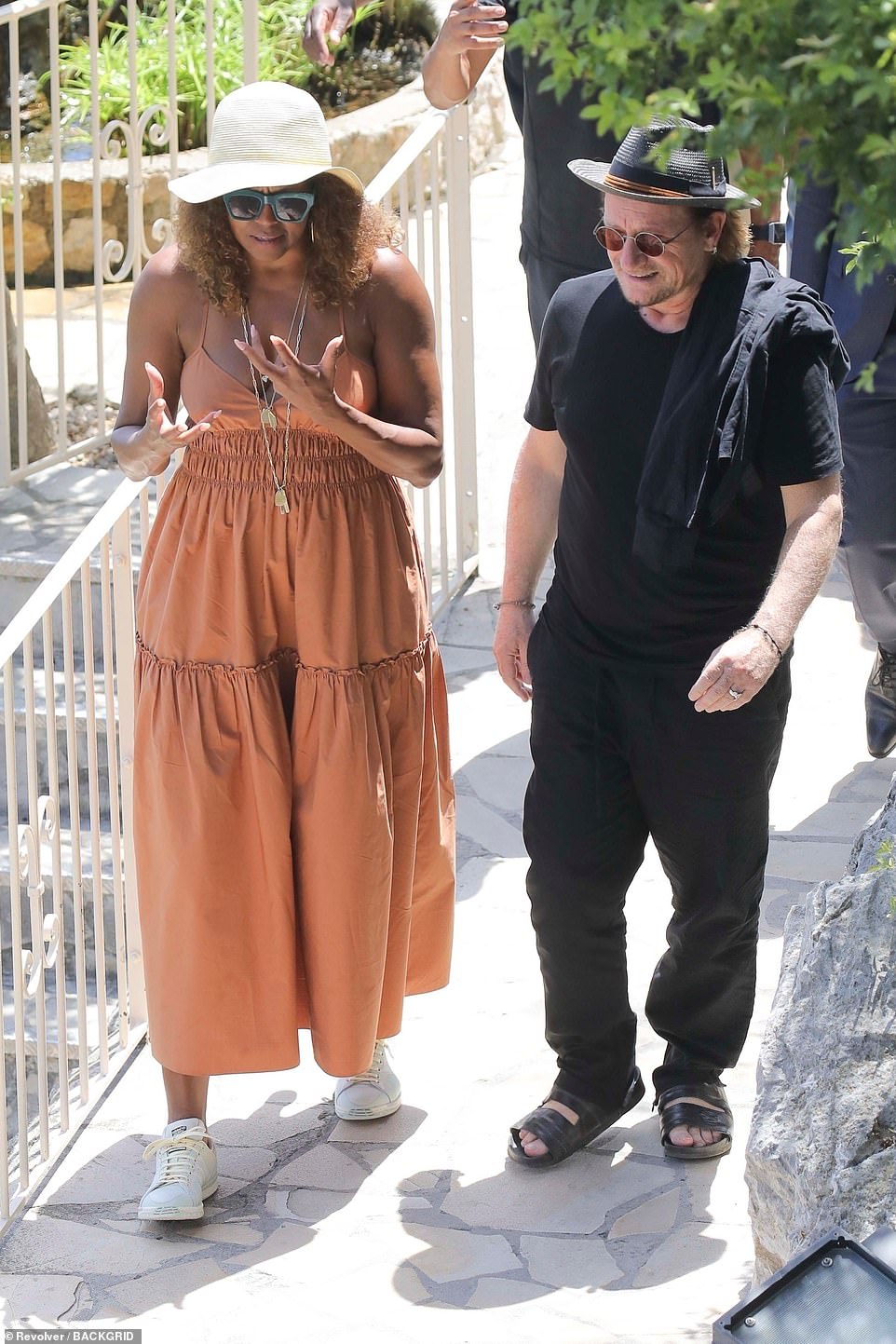 Leading the way: Michelle, 55, and Bono, 59, chatted as they strolled through the medieval city and made their way to the two-Michelin-starred restaurant La Chèvre d’Or

Barack looked relaxed in a black T-shirt and athletic pants, which he paired with a gray baseball cap, sunglasses, and light gray and black sneakers. He wore a smartwatch on his wrist and was possibly tracking his steps during the jaunt.

Bono, 59, matched his pal in a black crewneck shirt and baggy black pants, though he opted to wear a gray fedora and black summer slides.

The musician’s wife Ali Hewson, 58, appeared to be with them, as well as a woman who is thought to be his daughter Jordan Hewson, 30.

Gray and black were clearly the colors of the day for the guys, as The Edge also sported black pants, which he paired with a gray polo shirt and black sneakers.

Meanwhile, Michelle, 55, showed off her summer style in a mid-length burnt orange dress from British brand Three Graces. The design, which retails for around $600, featured spaghetti straps and figure-flattering ruching around the waisline.

The dress must be a favorite, as she wore the same frock to tour a vineyard in the famed Châteauneuf-du-Pape appellation in Provence on Monday with her eldest daughter and several friends. 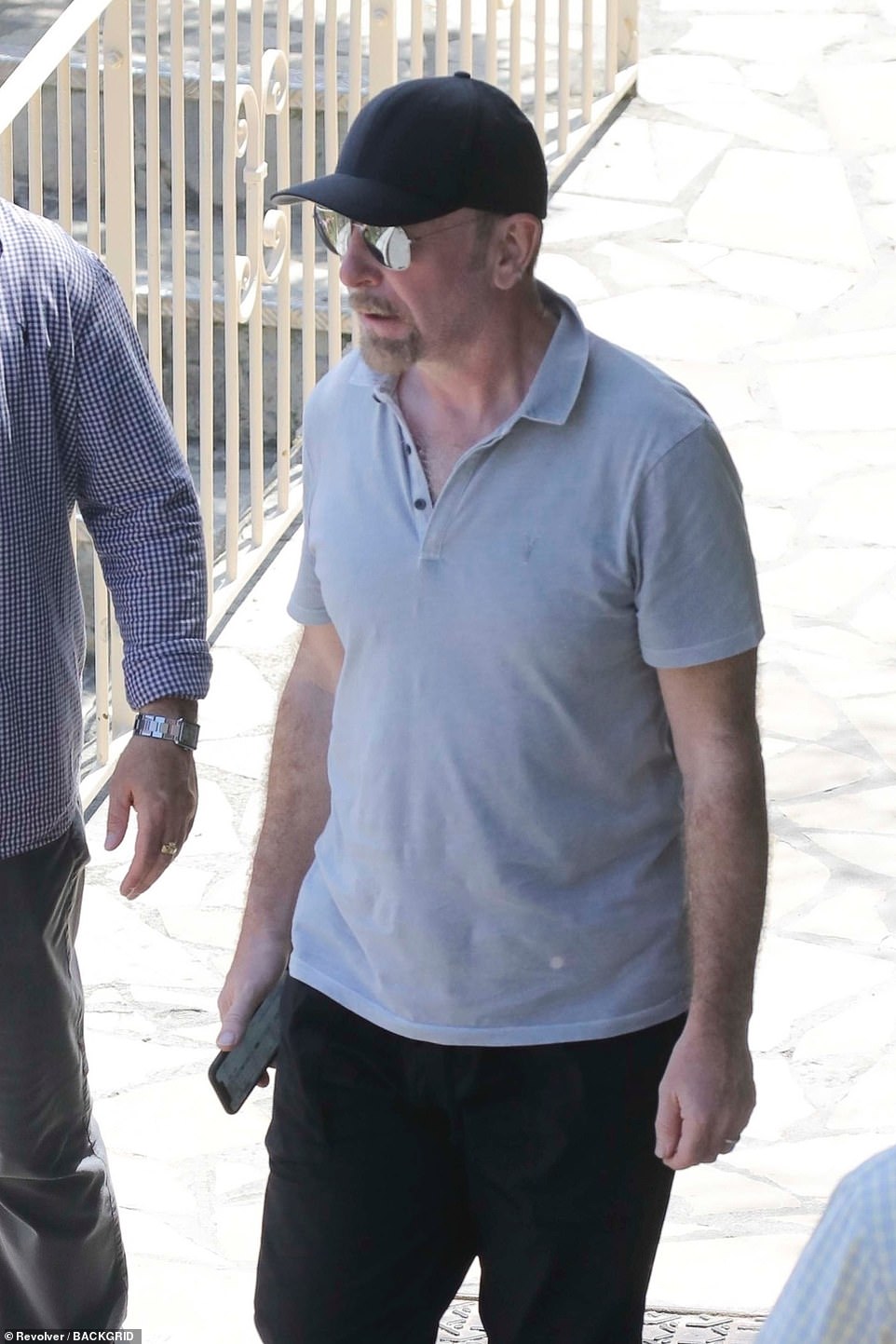 Out and about: The Edge, 57, donned a gray polo and black pants during the stroll

Family affair: The Obamas’ daughters Malia (left) and Sasha (right) were also there 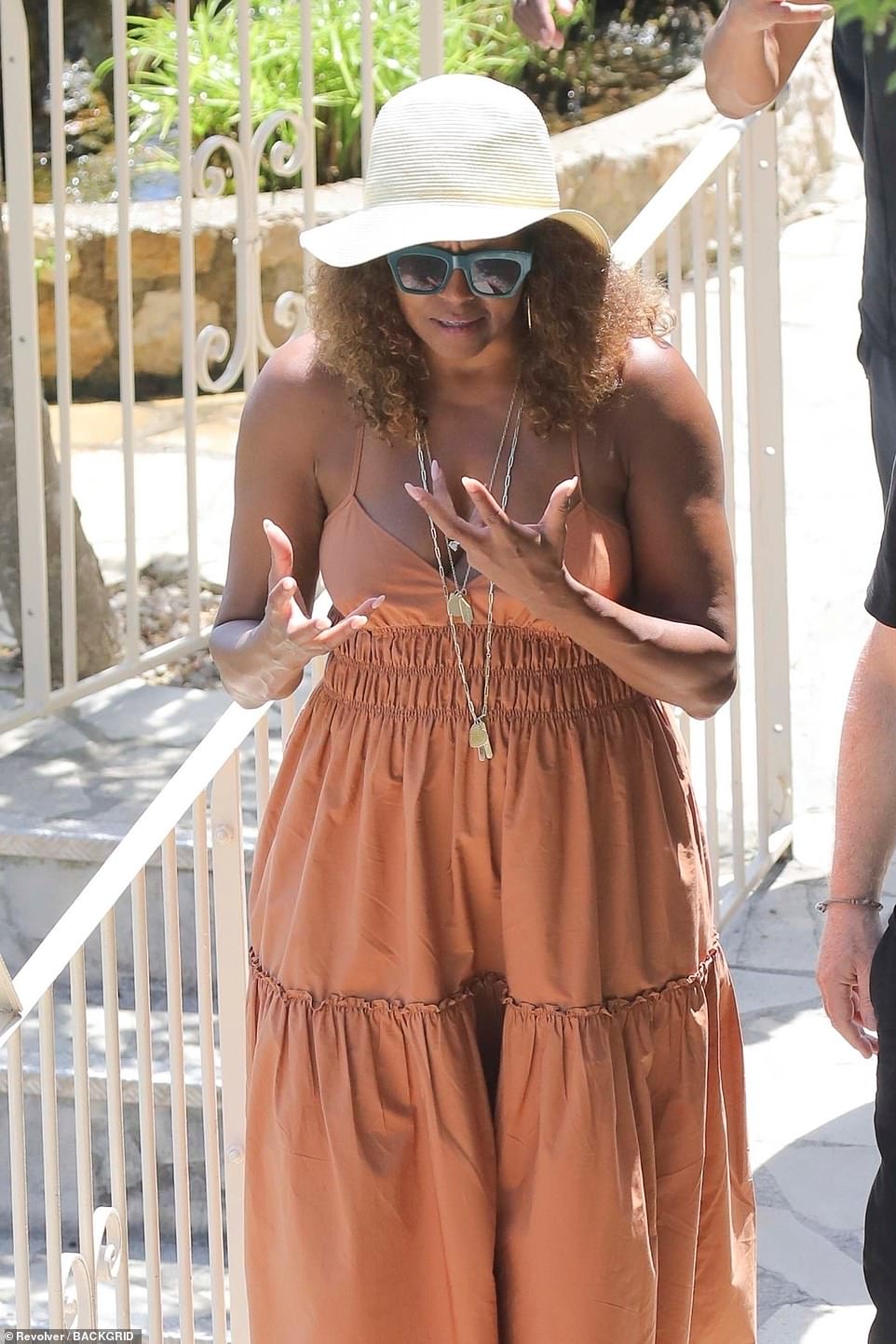 Always chic: Michelle showed off her summer style in a $600 mid-length burnt orange dress from British brand Three Graces that featured spaghetti straps and ruching. She wore the same frock to tour a vineyard on Monday

She wore her hair in natural curls, which she topped with a floppy cream sun hat that shielded her eyes from the sun.

The former first lady matched her husband’s sporty look with a pair of white sneakers and stylish blue sunglasses, but she had on a few more accessories.

Michelle dressed up her bohemian frock with a pair of gold hoops and layered necklaces.

Malia, 20, looked effortlessly cool in a black sports bra and high-waisted black shorts, an outfit similar to the one she wore to go hiking with her father earlier this week.

She wore sensible shoes from the stroll, sporting ankle socks and white sneakers. Her long braids were pulled up into a ponytail, and she hung her sunglasses on her shirt when she wasn’t wearing them.

The Obamas’ youngest daughter, Sasha, 18, took a cue from her mother and donned a black, white, and brown patterned summer dress and white sneakers. 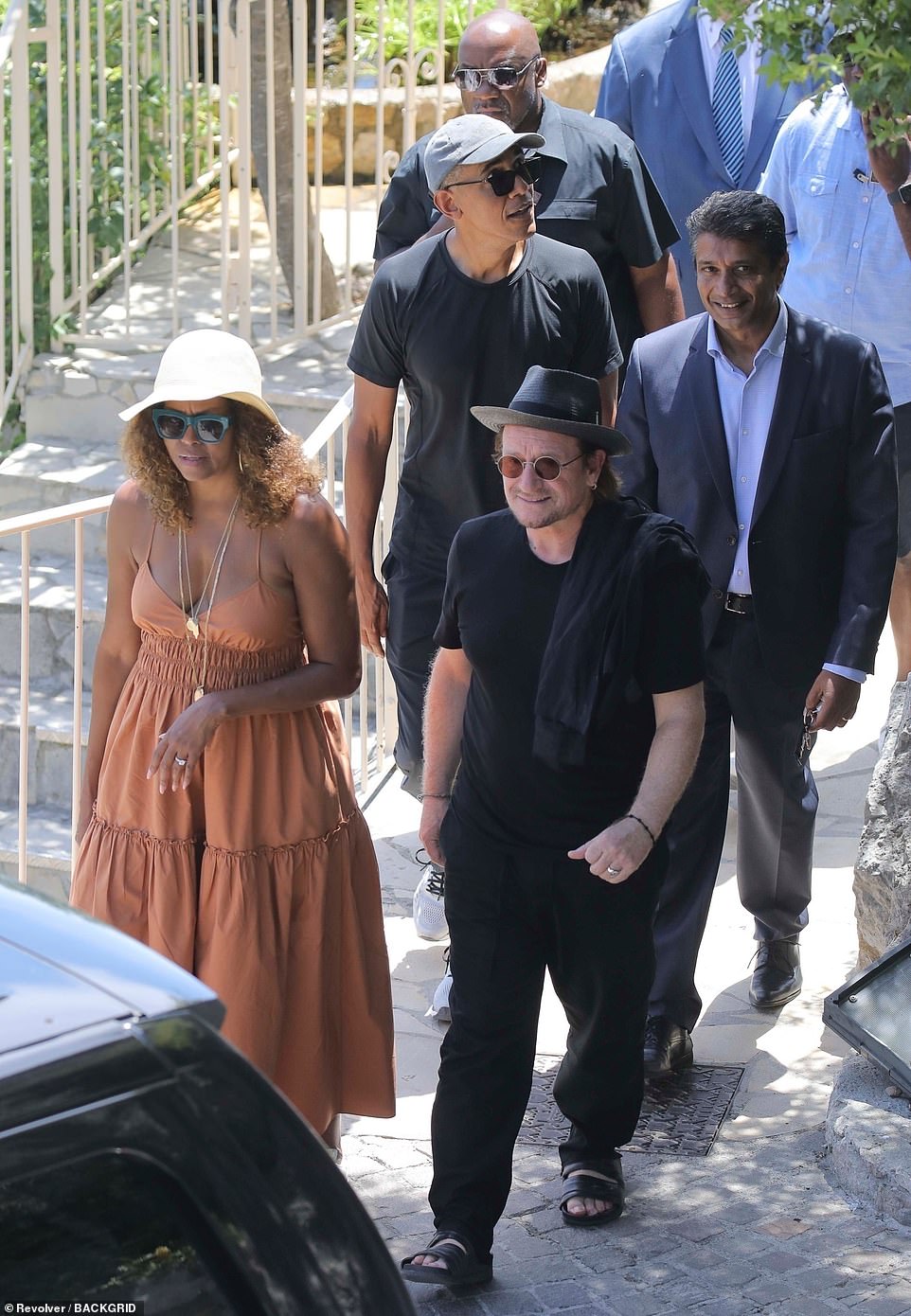 Protected: The group was flanked by the Obamas’ Secret Service detail during their walk

Saying hello: Bono seemed to relish in the attention and was seen pointing and clapping at the paparazzi 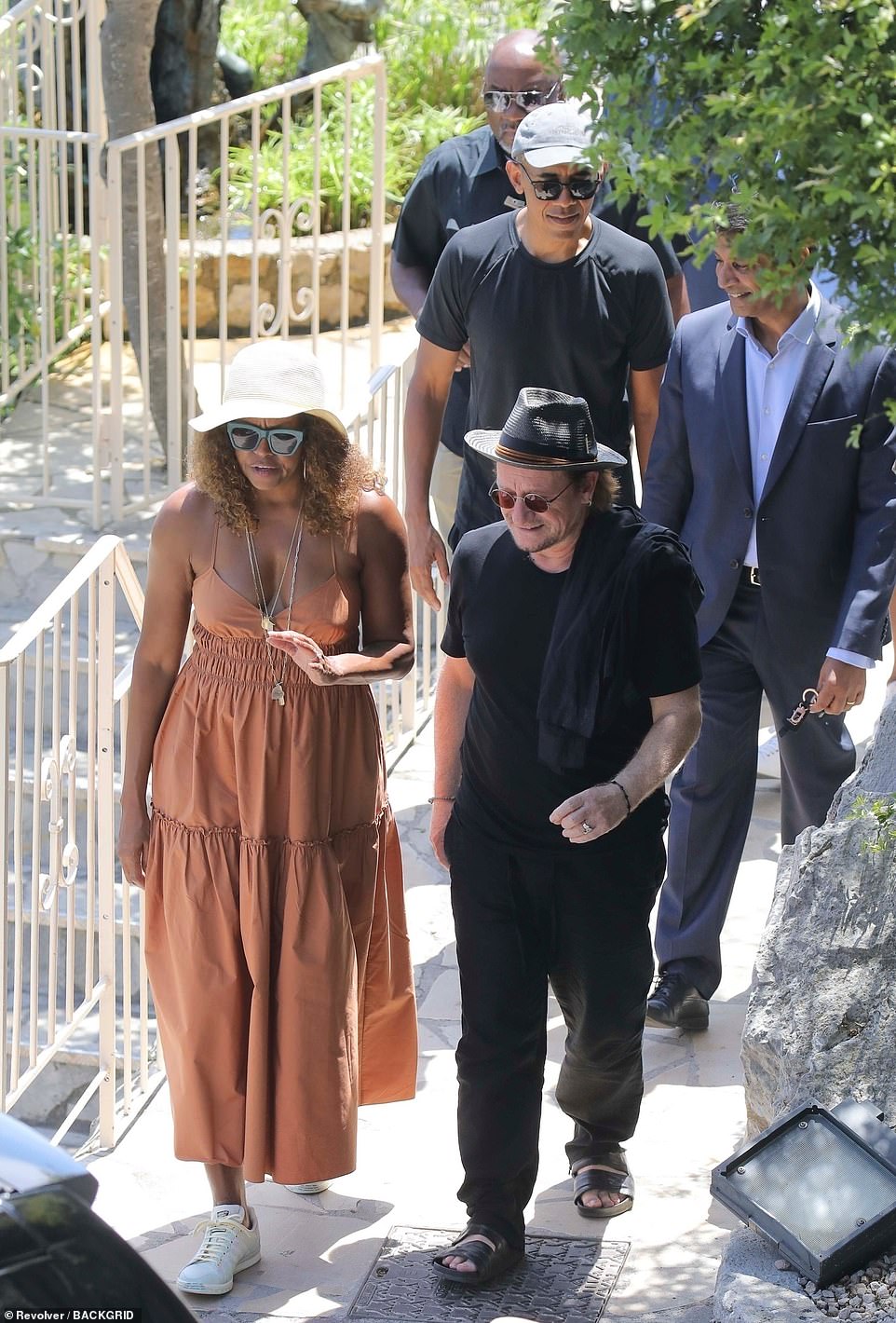 Rock star style: Bono was dressed in a black T-shirt and pants, opting for summer slides instead of sneakers

She had one delicate chain draped around her neck and a sparkly ring on her finger. Sasha’s dark hair was pulled back, and she sported pink polish on her long nails. Like most teens her age, she carried her cellphone in her hand.

Barack and Michelle looked indifferent to the paparazzi snapping their photos during their walk, but Bono seemed to relish in the attention. He had a smile on his face as he pointed and clapped.

The U2 frontman and activist has a longstanding relationship with the Obama family. His global campaign and advocacy group, ONE, worked with the Obama administration during Barack’s two terms in office.

They have kept close, with the rock star enjoying lunch with Barack and Michelle in New York City back in 2017.

Barack is also clearly a fan of his music, as U2’s hit ‘City of Blinding Lights’ was used in both his 2008 and 2012 presidential campaigns. He even walked out to the song when he gave his farewell address in 2017.

Ensemble: Malia, 20, looked effortlessly cool in a black sports bra and high-waisted black shorts, an outfit similar to the one she wore to go hiking with her father earlier this week 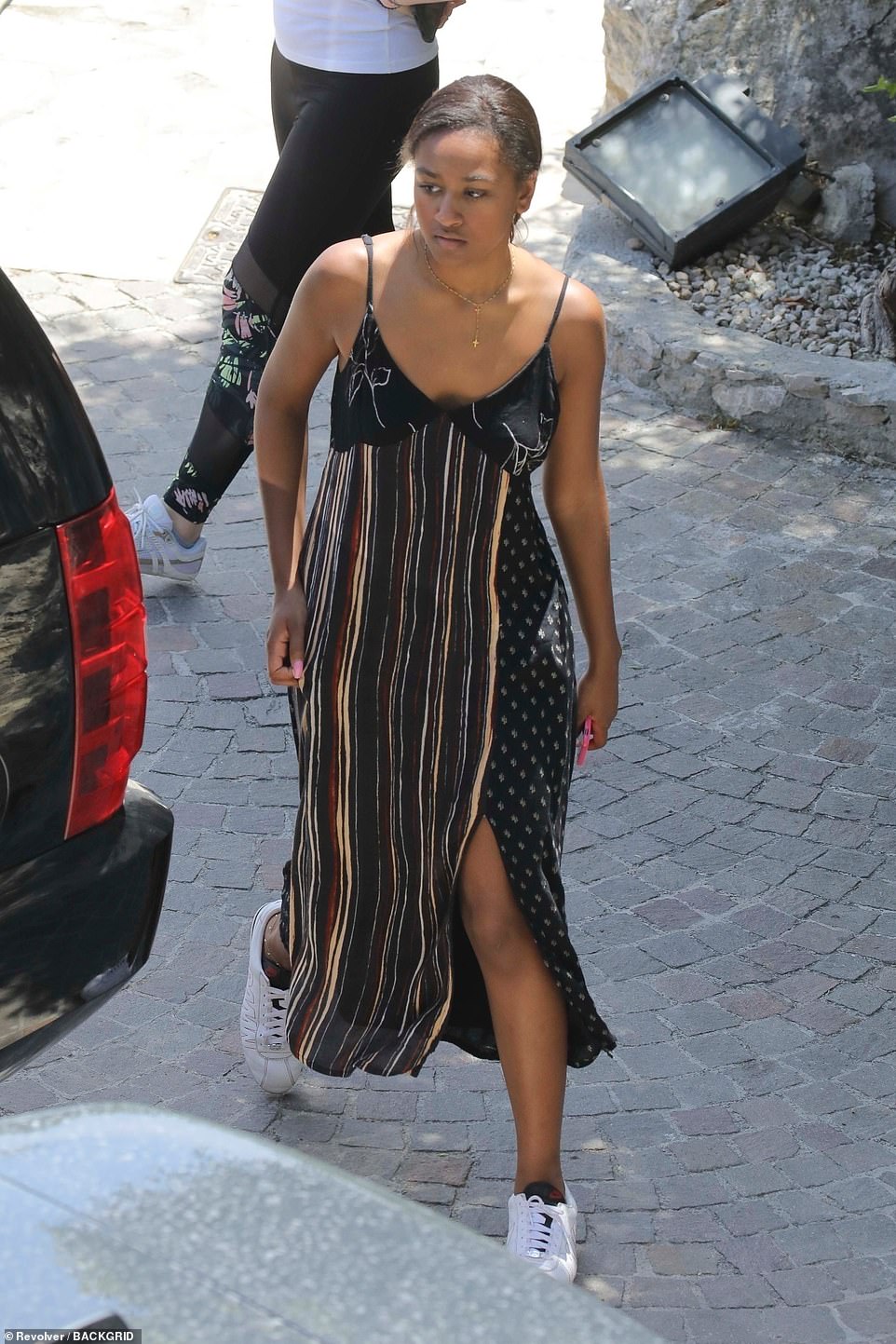 On vacation: The Obamas’ youngest daughter, Sasha, 18, took a cue from her mother and donned a black, white, and brown patterned summer dress and white sneakers 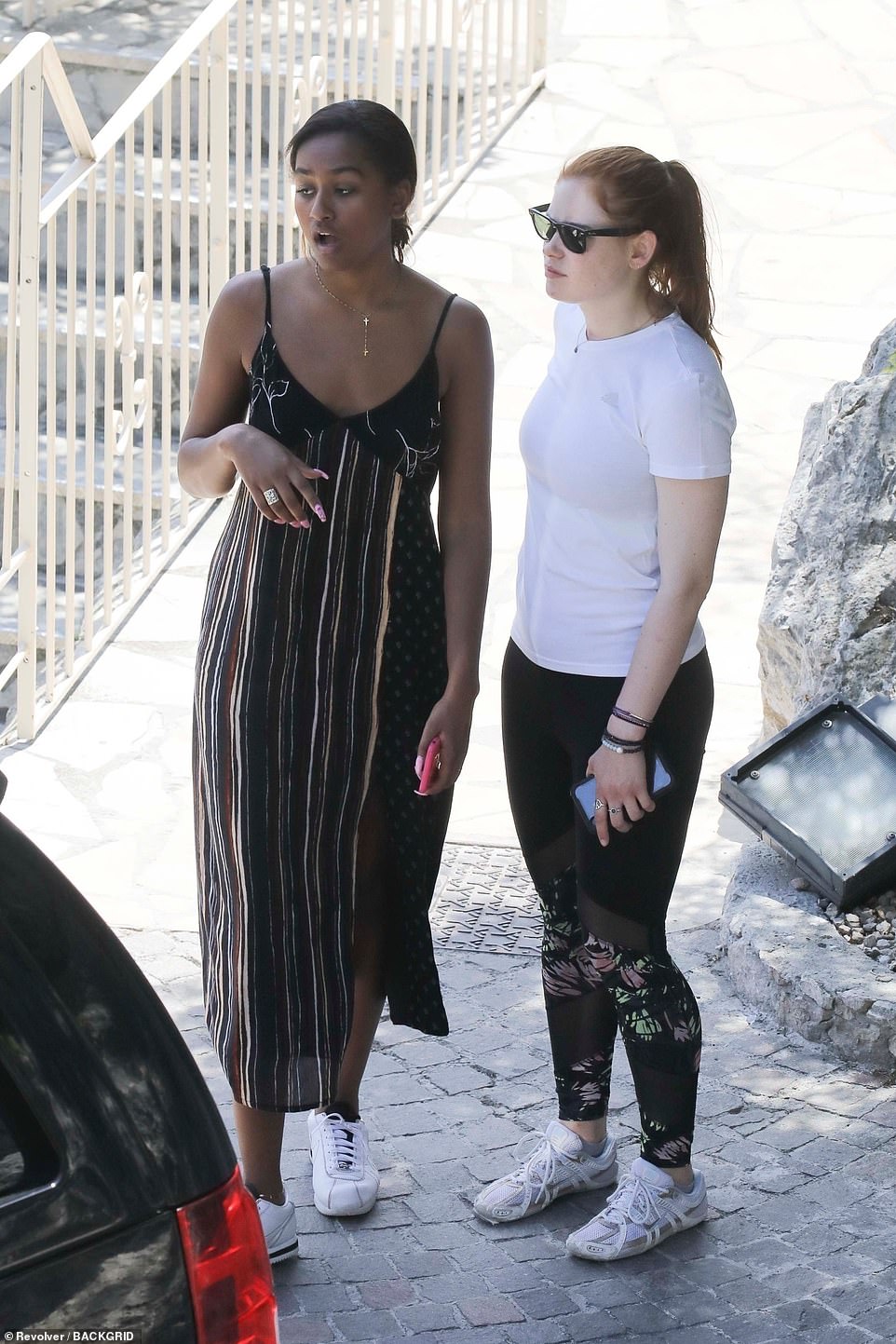 Connected: Like most teens her age, she carried her cellphone in her hand as she chatted with a friend 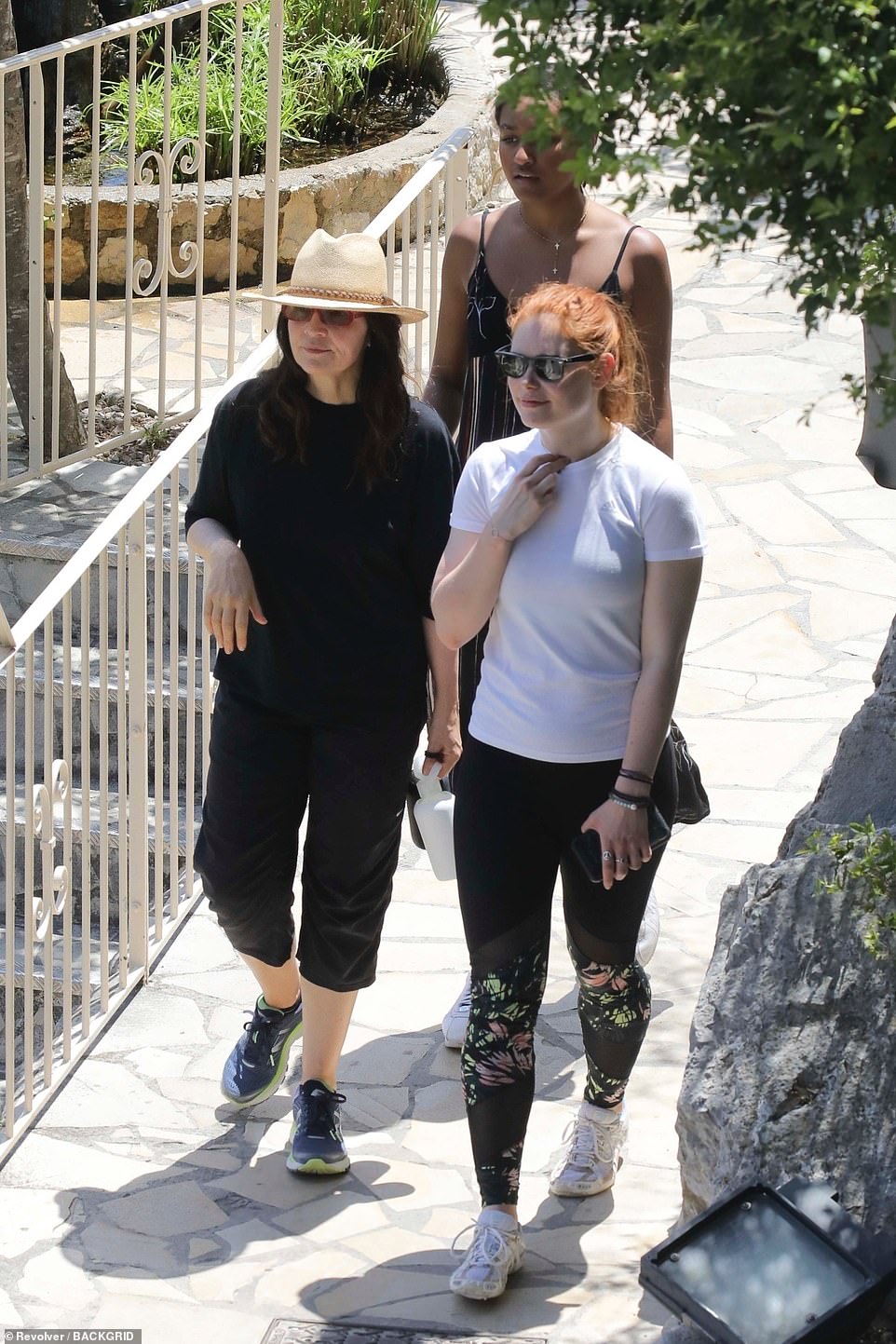 Incognito: Bono’s wife Ali Hewson, 58, appeared to be with them. She covered her face with a wide-brim hat and sunglasses

Bono and The Edge co-own a luxury mansion in Èze, and the Obamas may have been staying with them while visiting the French Riviera.

The group appeared to be joined by other friends, as well as members of their Secret Service detail who have been by their side since they’ve landed in France last Friday.

It’s been a glorious week for the family who has been enjoying wine tours, hikes, and undoubtedly decadent meals while away.

The foursome traveled to Avignon by private jet, just days after Sasha graduated from high school in front of her proud parents and her older sibling.

Since their arrival in Europe, the family has been taking in the local sight and sounds, with Malia and Sasha spending a day at a popular local market on Saturday.

The famous L’Isle-sur-la-Sorgue market is one of the top tourist attractions in the idyllic Provençal town known as the ‘Venice of Provence’ thanks to the scenic Sorgue river. 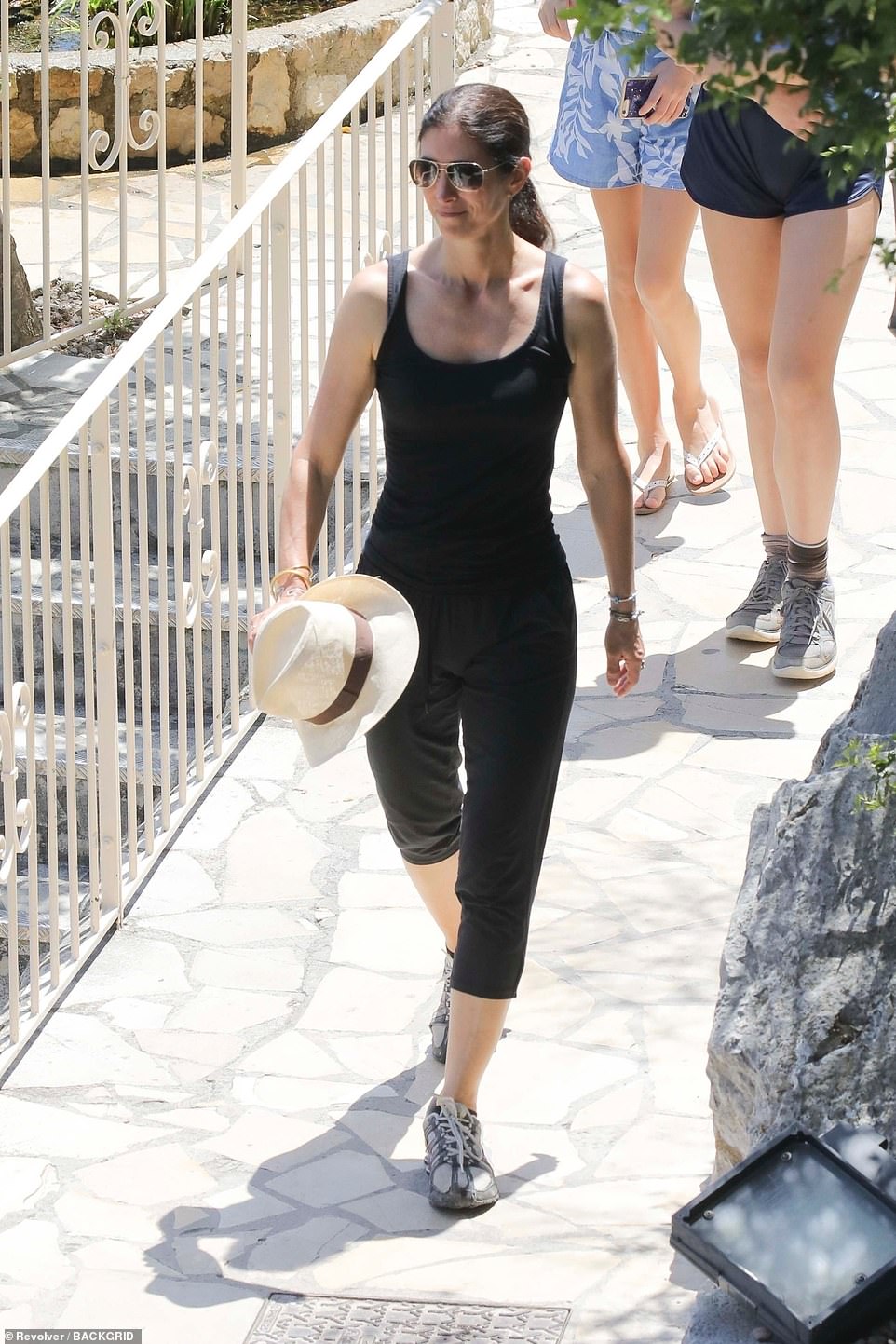 More family? A woman dressed in a black tank and leggings is thought to be Bono’s 30-year-old daughter Jordan 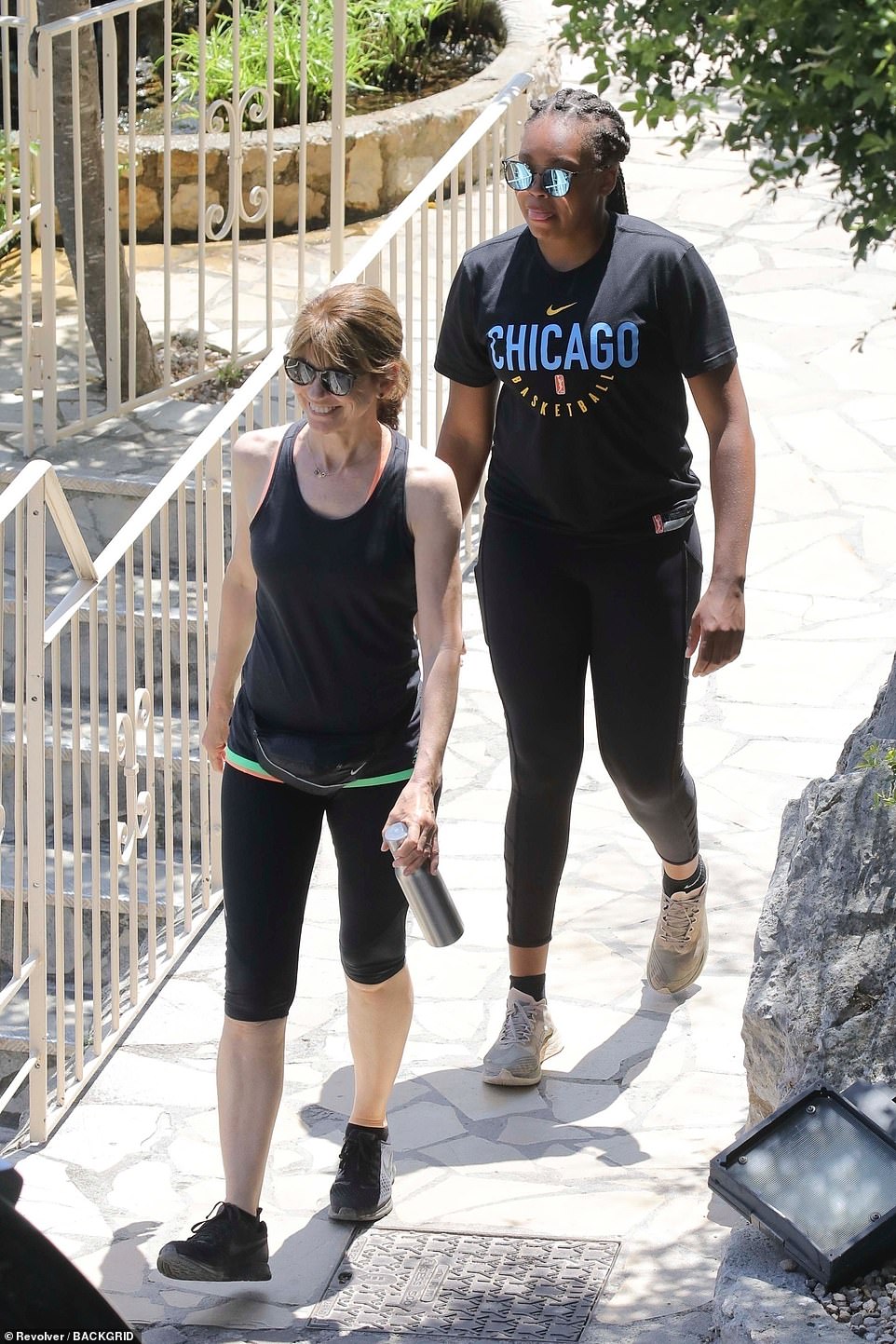 All together: The group was joined by other friends as well during their lunch date 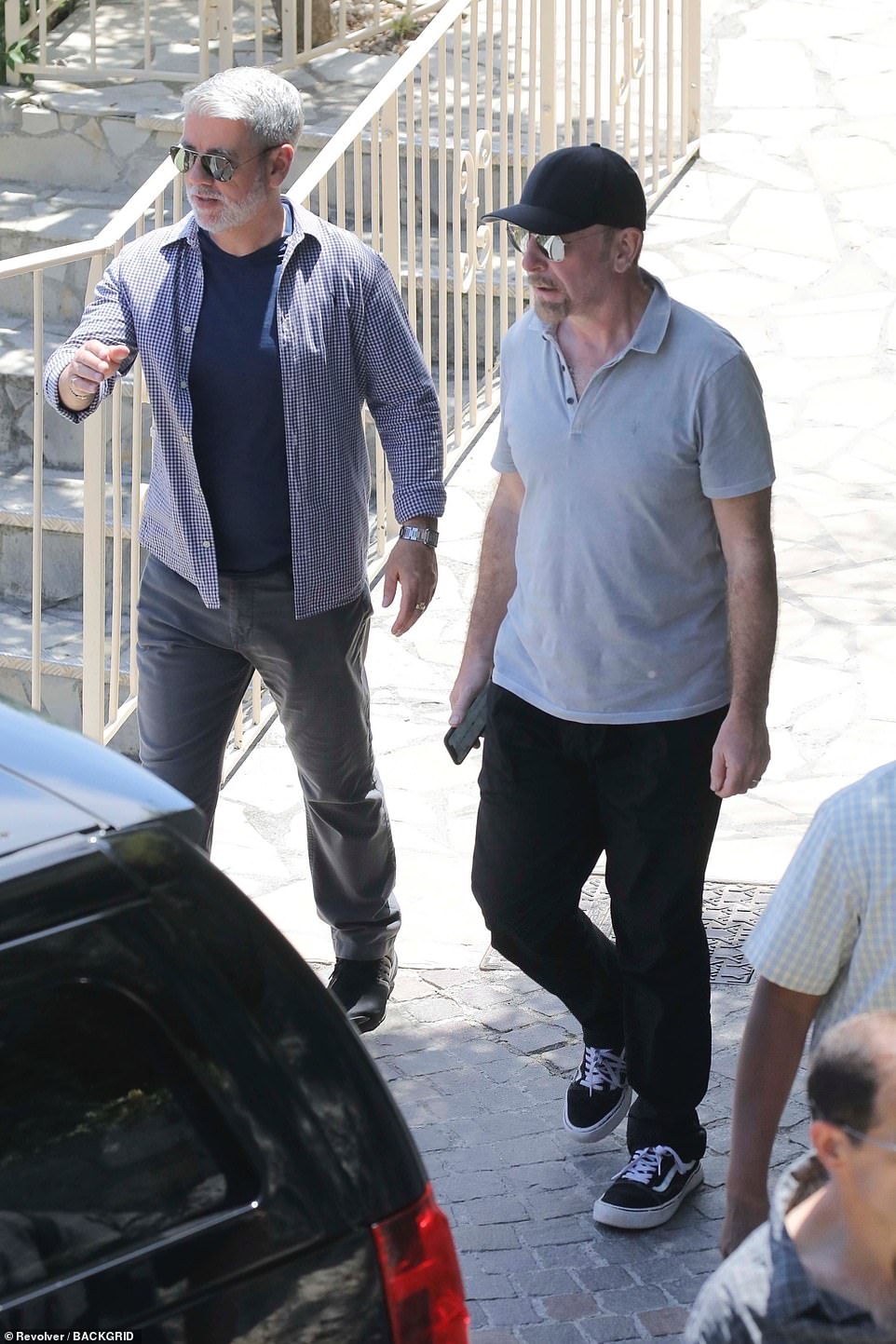 Keeping cool: The Edge shielded his face from the sun with a gray baseball cap and sunglasses 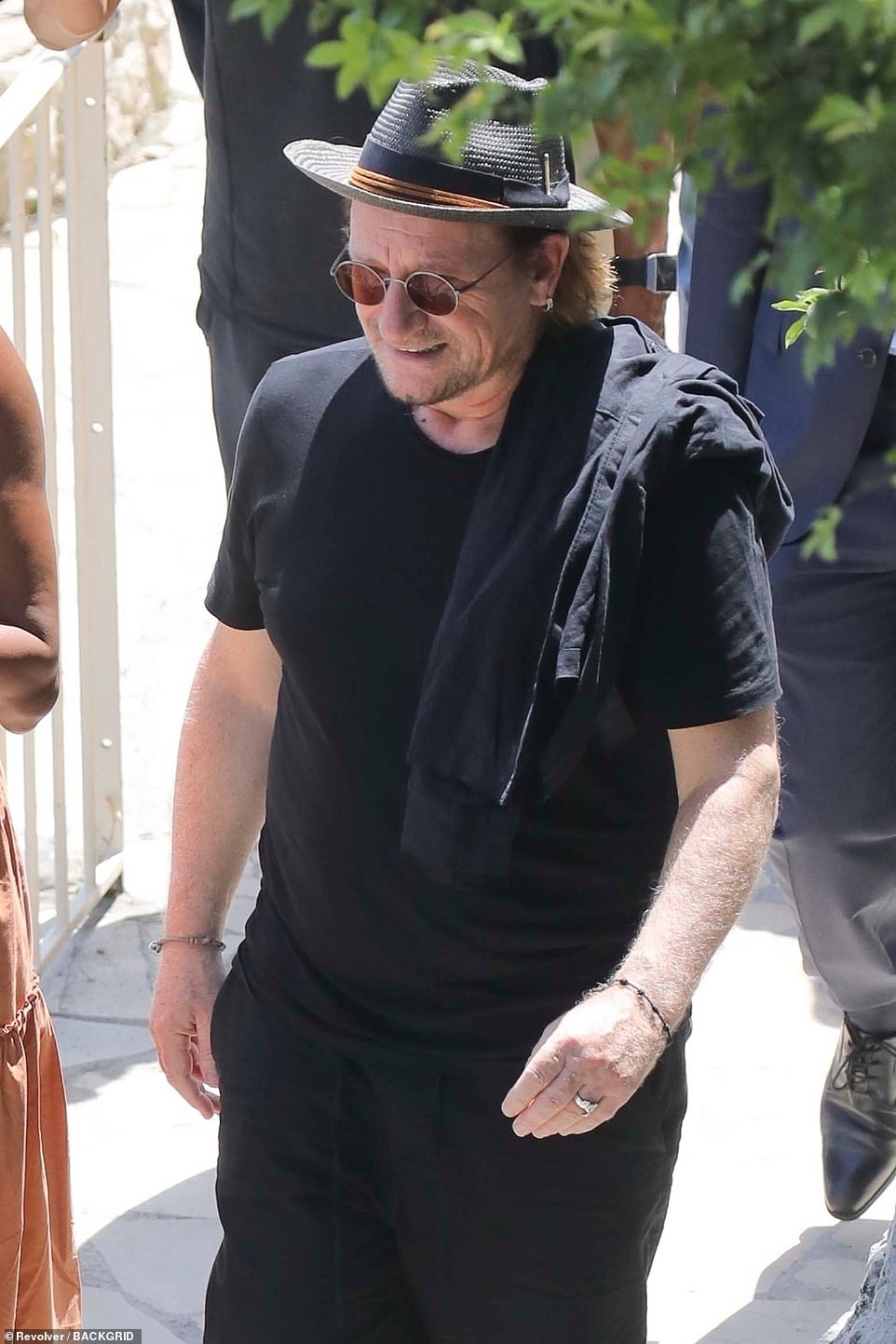 Accessories: Bono donned a fedora, round sunglasses, and jewelry during the outing

On Sunday, which was Father’s Day, the family spent plenty of time together, with Sasha and Malia joining their parents for a celebratory dinner at the Michelin-starred La Mirande restaurant in Avignon.

Earlier that day, Michelle and Barack visited Palais des Papes, the biggest gothic palace in the world, where they enjoyed a tour of the historic site — and took time to snap pictures of the property and its stunning scenery.

Barack and Sasha appeared to be absent when Michelle and Malia visited a beautiful vineyard in the famed Châteauneuf-du-Pape appellation in Provence on Monday.

The former first daughter, who is turning 21 years old on July 4, was seen walking out of Château Vaudieu with her mom, surrounded by friends and several burly Secret Service agents.

Michelle and her eldest daughter appeared to have enjoyed a tour of the historic building, which was built in the 18th century and sits at the center of 70 hectares of vineyards. 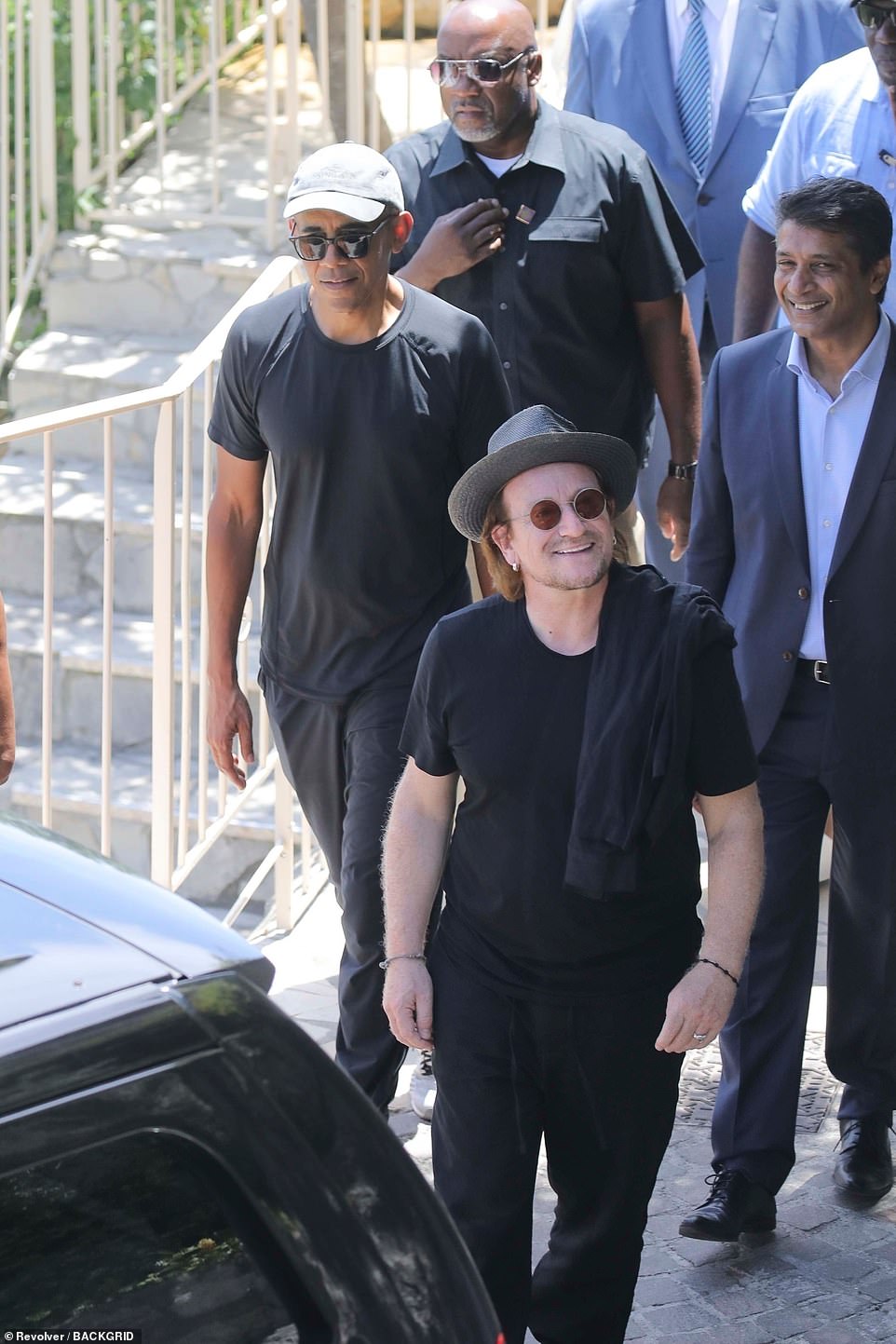 Old friends: Bono’s global campaign and advocacy group, ONE, worked with the Obama administration during Barack’s two terms in office 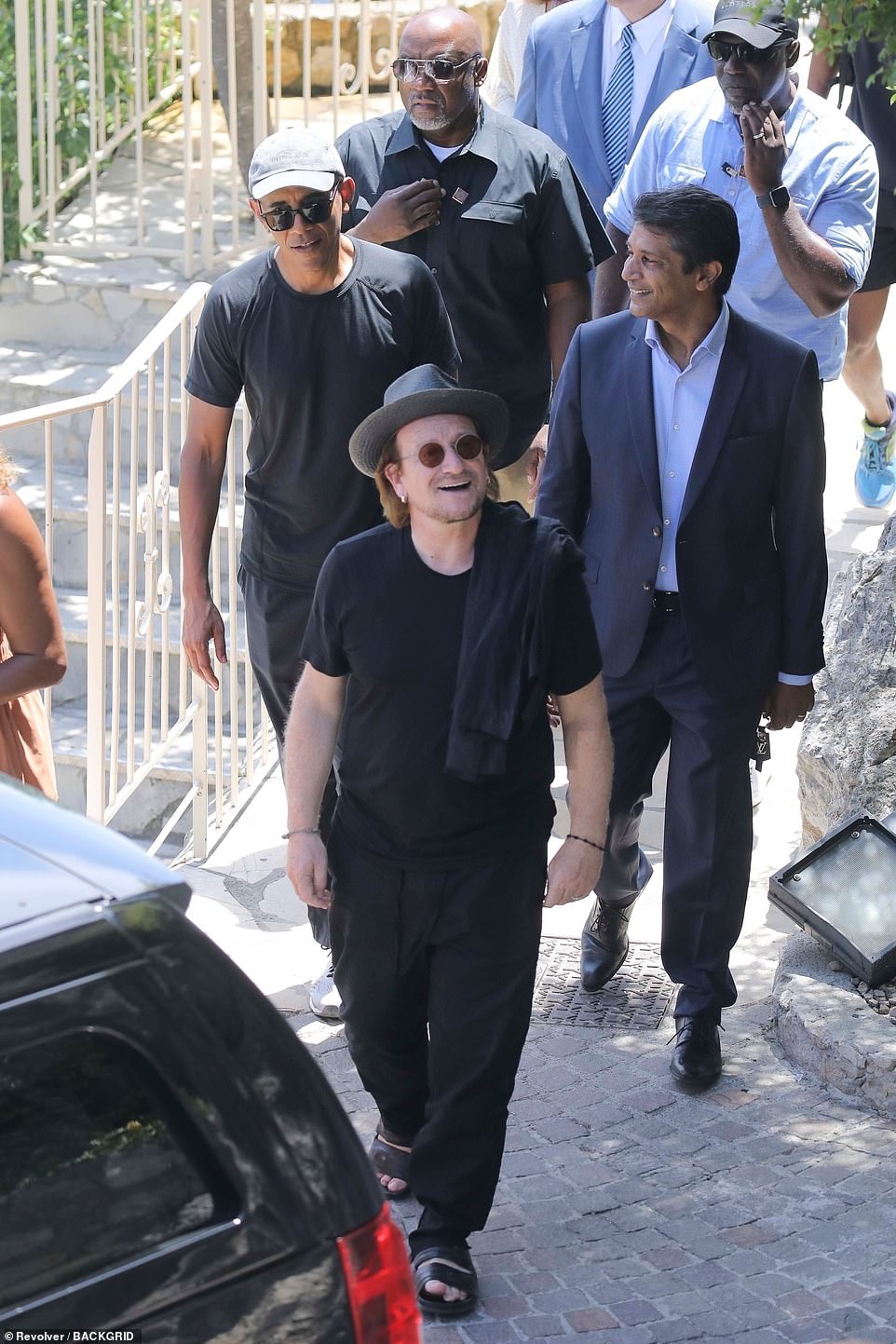 Good taste: Barack is also clearly a fan of his music, as U2’s hit ‘City of Blinding Lights’ was used in both his 2008 and 2012 presidential campaigns 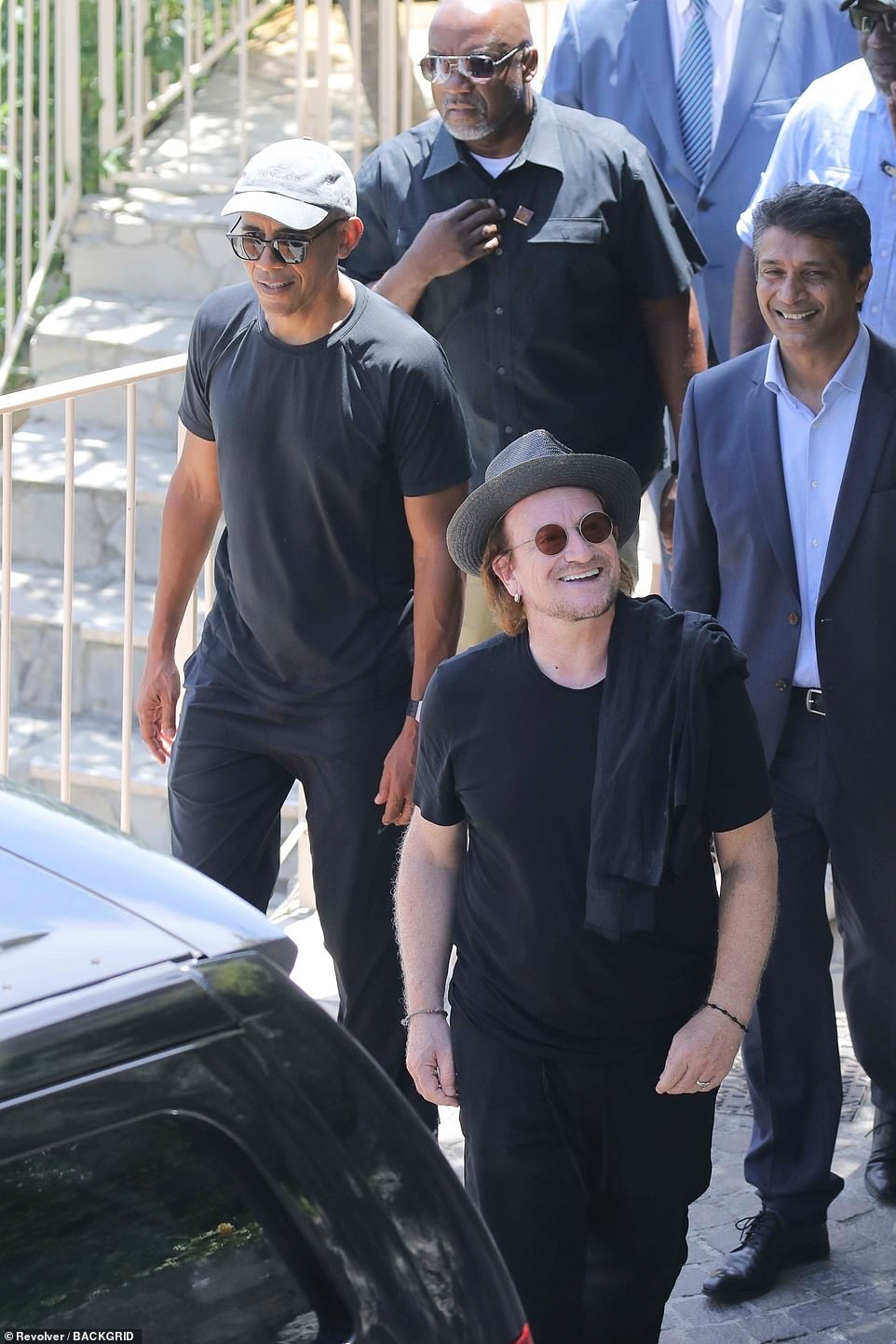 Keeping in touch: The rock star also enjoyed lunch with Barack and Michelle in New York City back in 2017

The property, which is one of only three 18th century castles in the Châteauneuf-du-Pape appellation, is located just 35 minutes away from the sprawling $60,000-a-week farmhouse where the family was understood to be staying for the duration of their Provence trip.

On Tuesday, Barack and Malia went on a group hike near Gordes, a commune in the country’s scenic Provence-Alpes-Côte d’Azur region.

The family seems to laissez-faire attitude about who goes where and when on their getaway, as they’ve split up a few times on their trip so far.

The next stop on the Obamas’ European jet-set tour will be George and Amal’s mansion on Lake Como, where they are to be the Hollywood actor’s latest guests at his luxurious home in Laglio.

The governor of Laglio has decreed that fines of 500 euros ($565) will be in place for any vessel or vehicle approaching within 300ft of the Villa Oleandra, which is usually accessible to the public, unlike typical A-list properties. 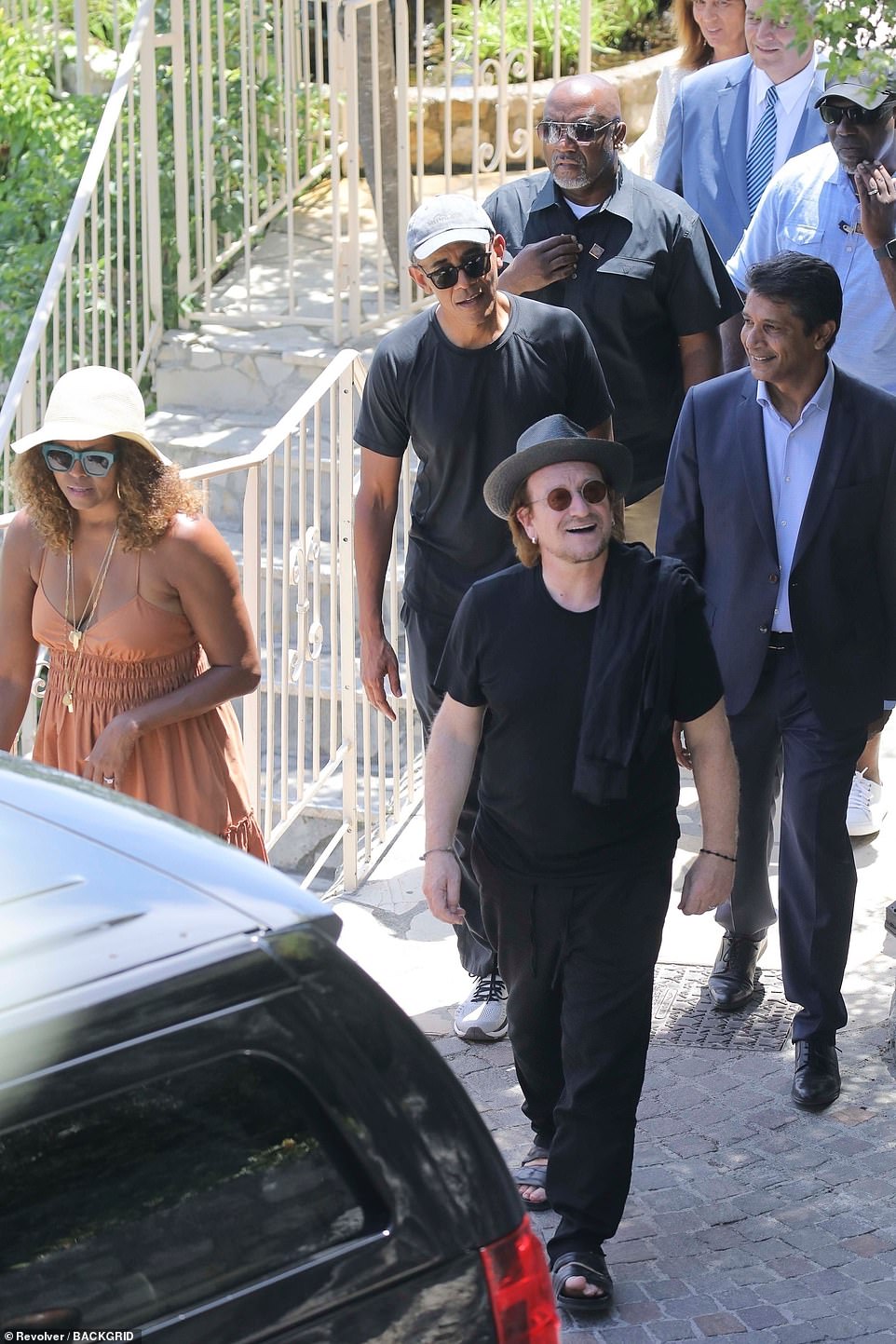 Lavish vacation: The Obamas have spent a week in France after traveling to Avignon by private jet last Friday 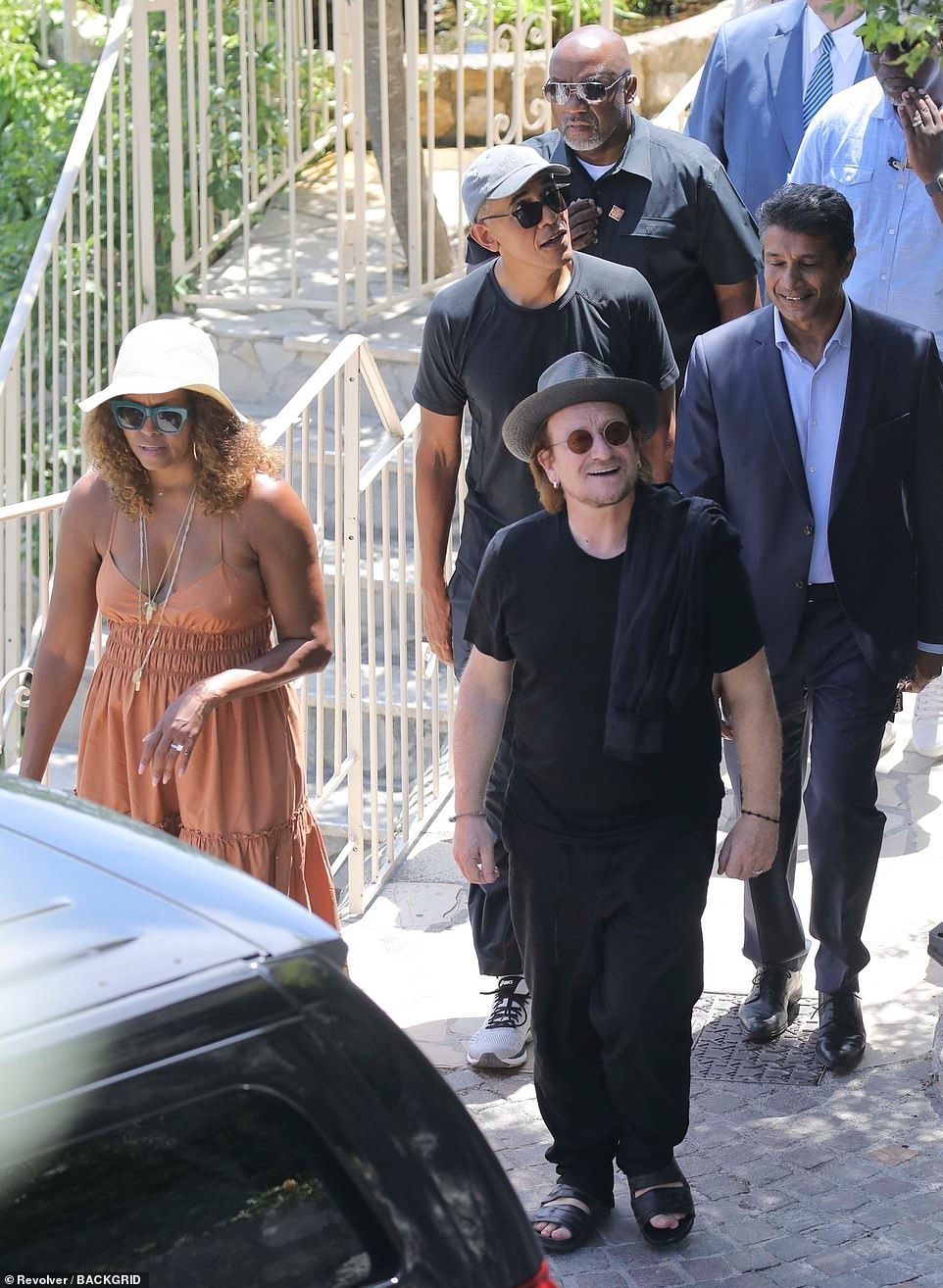 Saying goodbye? Their lunch with Bono and The Edge appears to be their last stop in France before they head to Italy 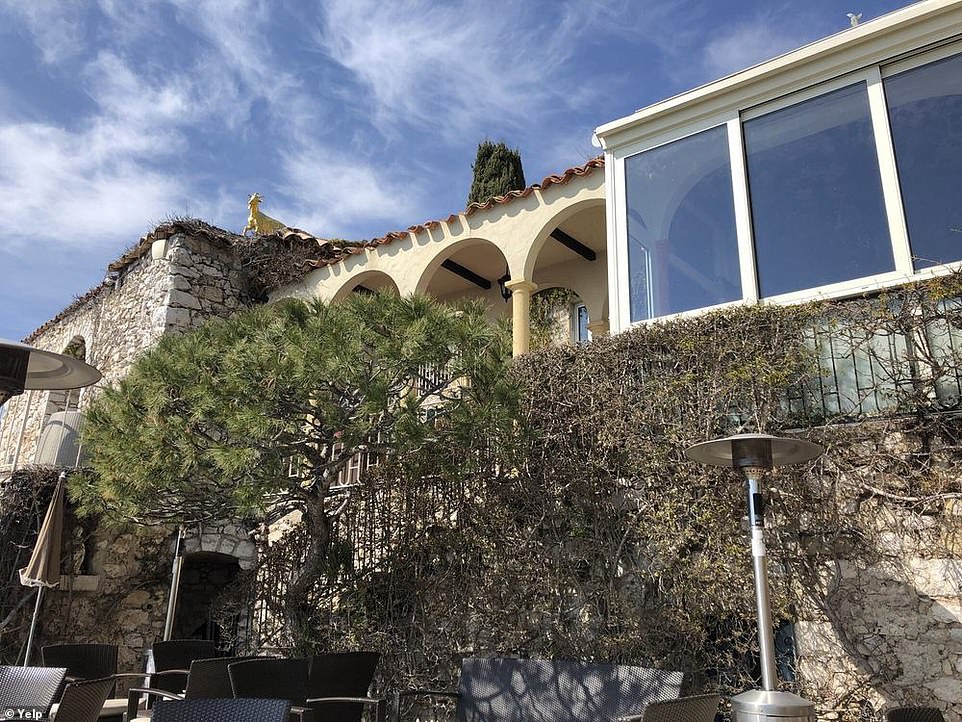 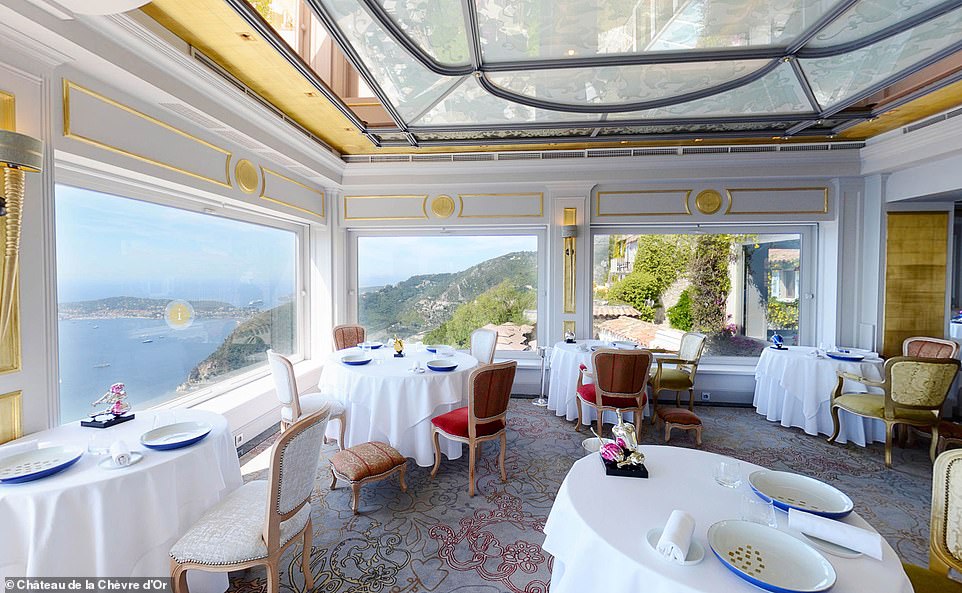 Terrific views: The inside of the stunning restaurant overlooks the French Riviera 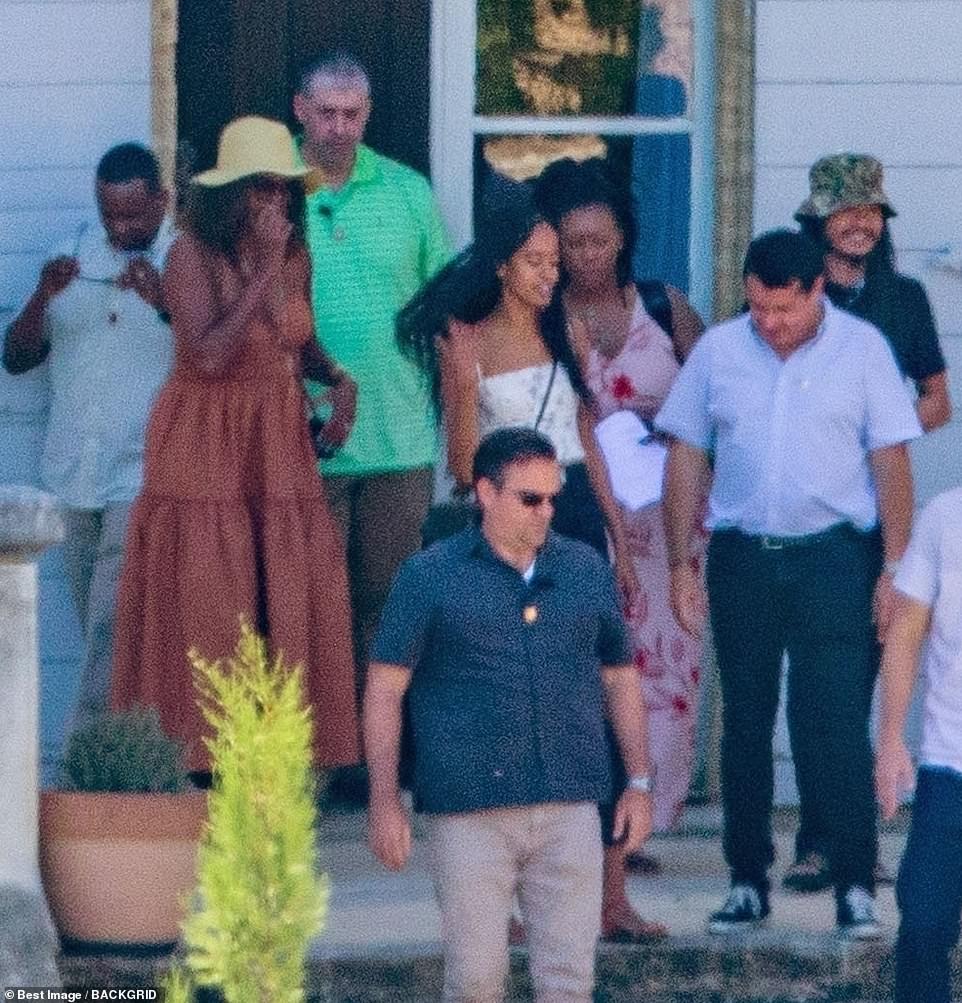 Girls’ day! Michelle wore the same dress to visit the famed Châteauneuf-du-Pape in Provence on Monday with her daughter Malia. They were seen leaving the Château Vaudieu surrounded by friends and several Secret Service agents 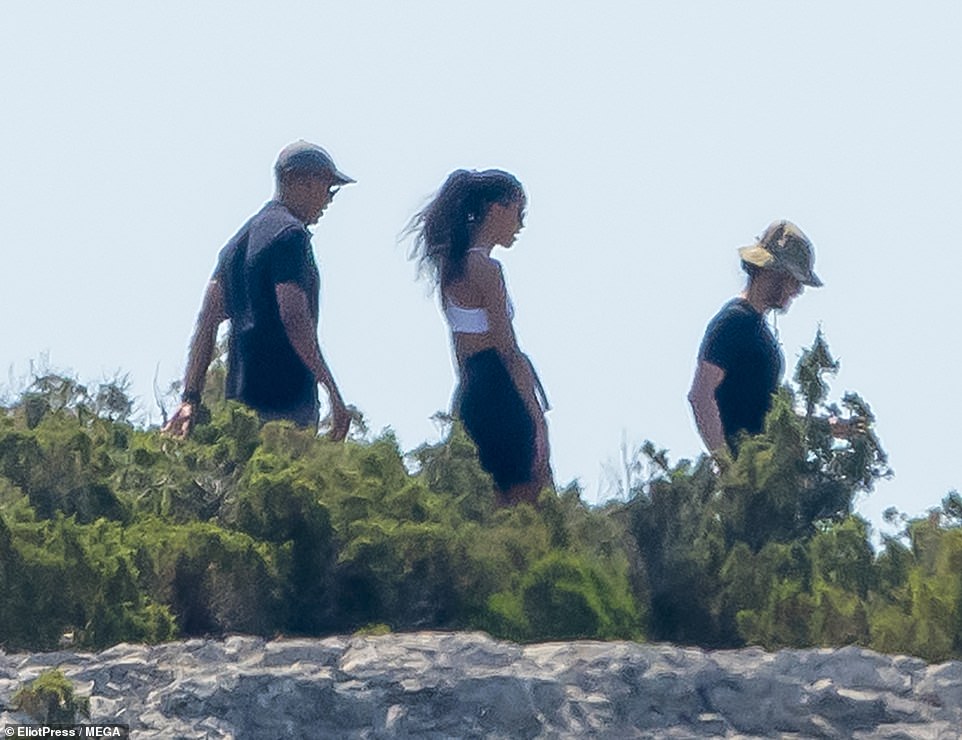 Bonding time: Barack and Malia enjoyed a hike on Tuesday near Gordes, a commune in the country’s scenic Provence-Alpes-Côte d’Azur region 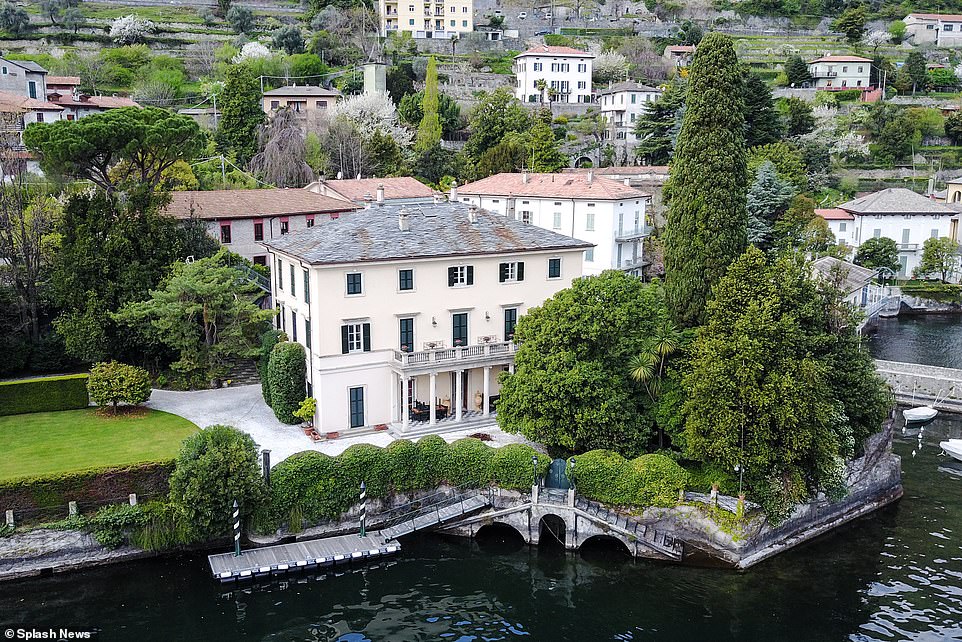 Incredible trip: The next stop on the Obamas’ European jet-set tour will be George and Amal Clooney’s mansion on Lake Como in Italy (pictured)

The Obamas will reportedly take their private jet to Milan from Provence where they are believed to have been staying. 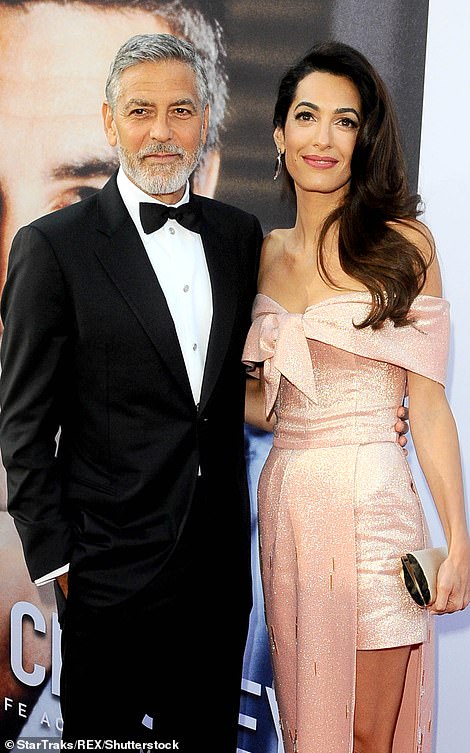 The family will join George, 58, and Amal, 41, at a charity dinner for The Clooney Foundation for Justice on Saturday evening after their arrival on Friday.

The actor, who is an honorary citizen of Laglio, is renowned for hosting the rich and famous at his mansion, including Meghan Markle, Brad Pitt, and Bono.

Mayor Roberto Pozzi confirmed the government was taking a number of security measures for the Obamas who have been pictured flanked by a secret service detail in France.

‘The parking lot at the back of Villa Oleandra will be closed for two days, Saturday and Sunday because it should be available for the security service cars. In the territory and also on the lake, numerous men and law enforcement agencies will be in service,’ he told Estadao.

The Riva Soldino beach nearby and the town’s pier will be closed to everyone except boat owners over the weekend, and even the water surrounding the villa will be in the exclusion zone.

In addition, there is a warning to potential drone pilots that their craft will not be tolerated close to the property.

The Piazza Barelli will be closed and parking is not permitted to accommodate TV broadcasting crews.

The mayor told Il Giorno it was ‘an exceptional promotion for our territory and a great honor.’

‘For such a great honor, there is a price we must pay,’ he said of the inconvenience.